The idea of a small desktop is not a new one. Anyone who has been following the PC industry for a while will be aware of a company called Shuttle, which around 2001 introduced the SFF (Small Form Factor) PC as a commercially viable and comprehensive alternative to a regular-sized desktop case, the Shuttle XPC Glamor Deluxe being a recent example. Then in 2005, along came Apple’s Mac Mini, and redefined how small a fully-featured desktop computer could be. Strangely enough, apart from a few efforts like the Evesham Mini PC Plus and of course Shuttle’s own XPC X100, there weren’t as many SFF PC imitations as might have been expected.


But now there’s a resurgence in trying to make the smallest desktop PC possible, thanks to everyone’s favourite miniature sub-notebook, the Asus Eee PC. This sleek, affordable portable has been so successful that a desktop variant was inevitable, and indeed the Asus Eee Box is already on its way – as is its competition. In fact, some manufacturers have pipped Asus to the post: MSI might not have launched its Wind subnotebook or Desktop PCs yet, but it does have a small desktop machine available to buy now, the ironically named Titan 700.

It comes in a minimalist bundle: the unit itself, a well-constructed stand, driver CD and CD-sized manual. That’s right, no operating system; this is apparently one of the ways in which MSI keeps the price down around the £200 mark, though I can’t help but think a free version of Linux wouldn’t have added that much. Having said that, it might have something to do with the drivers supplied being only for Windows XP (there are no other drivers available on MSI’s website either), or that MSI is also marketing the Titan towards businesses who are likely to have multi-user Windows licenses anyway. 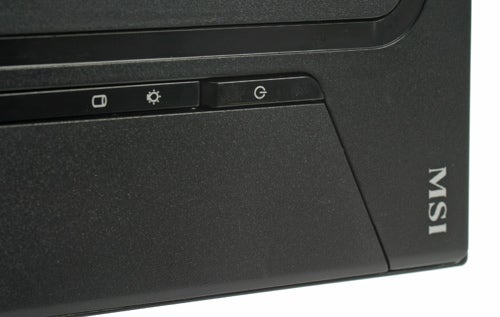 The company claims its Titan 700 is “the perfect combination of desktop and industrial PC”, and at first impression, ‘industrial’ is certainly the word that springs to mind. The main part of the chassis is rock-solid black matte metal, with four square, large and strong rubber feet for placing the unit horizontally. When in this orientation, all that really breaks the Titan’s clean lines is a small grille at the top. However, when placing the unit vertically, the entire top is perforated with large holes, allowing you to easily see multi-coloured power cables and capacitators. This is ugly, and spoils the MSI’s good looks somewhat – more of a pity because it could easily have been avoided, either by using smaller perforations or a black dust-filter.

The front of the unit maintains the sharp, box-like styling. It is constructed from matte black plastic, which doesn’t pick up fingerprints. And that’s a good thing, as everything except the power button and two status indicators is covered by two flaps you’ll be opening and closing regularly. The lower one hides two USB 2.0 ports spaced well apart, and the usual headphone and microphone jacks. The hinges are of course plastic, but they hold the cover open without problems. 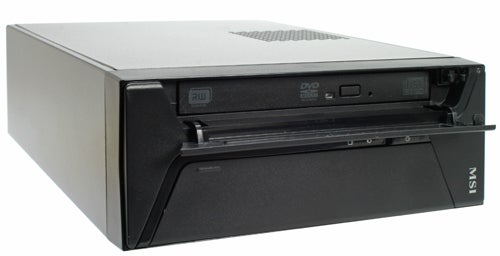 However, the top flap, behind which the slimline DVD writer resides, is rather disappointing. It’s slightly annoying that the cover doesn’t stay in place due to a loose hinge, but the biggest issue is that putting in a disc is more convoluted than it rightly ought to be. First you need to press a point (marked by a small icon) to release the cover’s catch, then pull the cover open, and finally push the button on the actual drive and pull it all the way out. Again, this problem could have been easily averted by mounting the drive flush with the front of the case, or at least providing a cover that could open with the tray.


Speaking of opening covers, it’s really easy to open up the Titan 700: just remove two screws and pull the top cover off. This reveals a removable tray which, after a bit of pressure from a thin flat-head screwdriver, gives access to the very generous 120GB 2.5in SATA hard drive and laptop SATA DVD writer. Nothing else about the Titan is actually upgradeable; according to MSI, even the single 1GB DDR2 DIMM is the maximum amount the VIA chipset’s architecture can handle as well. 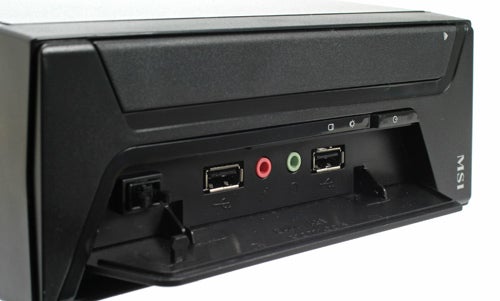 Getting around to the rear panel, we have quite a few connections with some less desirable than others. Starting off with video, there’s the usual DVI (though in this case not HDCP enabled) and D-SUB port, unusually joined by an S-Video connection. For peripherals there are two USB 2.0 ports, two PS2 ports – perhaps outdated for the consumer market but still very much in use in business environments – and no less than two serial ports. This latter inclusion might seem nonsensical, but can actually be justified; when a large company is purchasing multiple systems based on their cheap price as the defining factor, it doesn’t want to have to purchase new peripherals too, and yes, some companies still use serial devices. Of course, going by that argument, VIA should probably have included a parallel port too.


In addition to the obligatory power connection and LAN jack, there are three 3.5mm analogue connectors for 5.1-channel audio, one of which also doubles as a microphone jack – meaning that if you go for stereo sound and use PS2 adapters for your mouse and keyboard, you can hook pretty much everything up to the back of the Titan, leaving the front unspoiled.

The stand is a thing of beauty, constructed of thick plastic in the same finish as the Titan’s front. Rubber pads everywhere it touches ensure you’ll never mark the case or any surface you put it on. The stand provides support for the entire unit, but the only parts you can see are two fins that extend about three centimetres to the sides and are about half as deep as the case itself. Consequently, you can choose to have it visible towards the front or the back of MSI’s miniature machine. The excellent stand just makes it more of a pity that when upright, the Titan 700’s top is so unattractive, due to the aforementioned visible cables. 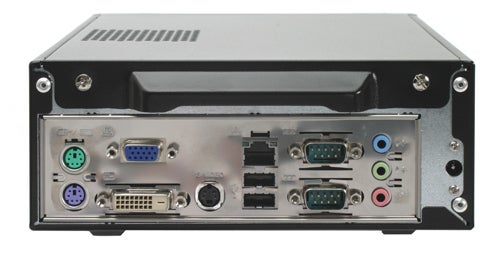 In terms of noise, despite MSI’s claimed maximum of 35dB(A), I found the machine to be annoyingly audible, certainly more so than an Acer Aspire L320 I had running beside it. Considering the older Aspire packs far better specifications into a case of similar volume, this is rather disappointing, though to be fair the Titan stays just slightly cooler under typical use. Nearly all of that noise is caused by the single 40mm fan which cools the 2GHz VIA C7 ULV (ultra low voltage) processor. Things look up when you consider power usage, as the 60W integrated PSU is indicative that the little black box has the average power consumption of a light bulb. But then the VeryPC GreenPC manages a roughly similar power draw on more powerful specifications. 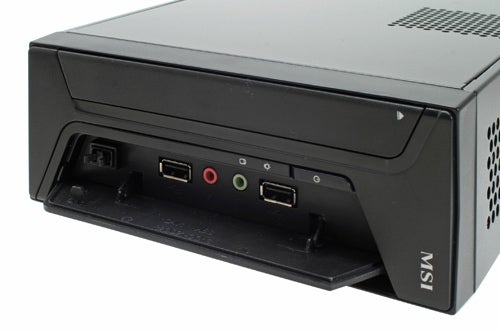 When it comes to entertainment, it’s clear that MSI isn’t joking when it pitches the Titan mainly as a business platform, and any mention of the 700 as a “living room PC” ought to be taken with a very large grain of salt. The machine just about coped with a 720P .AVI high definition movie trailer – as long as nothing else was running in the background – but trying a .MOV file at the same resolution under Media Player Classic turned into a slideshow (though it’s worth noting that ordinary SD video runs without a hitch).


Gaming is even less feasible, as the integrated VIA/S3 Unichrome IGP Pro graphics chip only produced a paltry 9.42 frames per second at 640 x 480 with all settings at minimum in TrackMania Nations Forever – hardly an intensive game in the first place. Another disadvantage to this chip is that it appears to support a maximum resolution of 1,600 x 1,200 (1,280 x 800 widescreen), so you won’t be able to run most 24in monitors at native resolution.

The Titan’s generally underpowered specifications mean that any hardware-intensive tasks are going to chug. In fact, it is even trumped by the two-year-old Sony VAIO VGN-TX3XP ultra-portable notebook. But that particular machine was almost ten times as expensive, and for everyday use, the Titan 700 is usable. Office 2003 applications open fast and run smoothly, and browsing the web is a pleasure, especially when using the non-memory intensive Firefox 3 – as long as you don’t open too many tabs. So for the business or casual home user, the Titan is a viable choice. The question is whether it’s a good one, and the most common answer will probably be ‘no’.


You see, by virtue of its pricing, specifications and configuration, MSI’s small black machine has placed itself in something of a niche. Apart from its 120GB hard drive and DVD-writer, it doesn’t offer that much more than an Eee PC 901 or other NetBook (even in performance), though it is still somewhat cheaper. 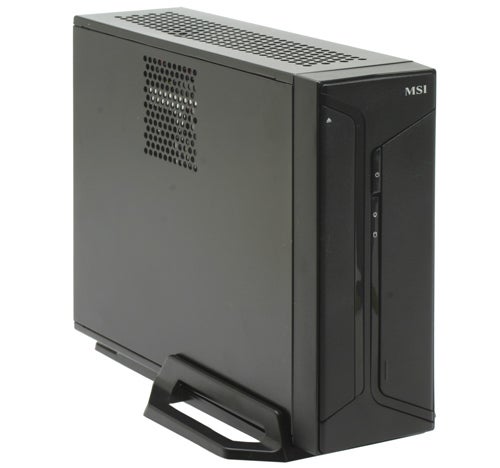 But talking of price, an extra £100 will buy you a lot more. Sure, that’s a 33 per cent increase on the Titan’s price, but for almost all non-business consumers it will be a worthwhile investment. For example, the extra hundred can get you an Acer Aspire L320 desktop, which apart from being nearly the same physical volume includes a far superior 1.86GHz Core 2 Duo CPU, 320GB HDD, TV-Tuner, media remote, mouse and keyboard, as well as Vista Premium. That amount will even stretch to a 17in laptop like the Acer Aspire 7520 Gemstone, which again not only comes with more features, better graphics and Vista pre-installed, but its own 17in LCD screen.


A rugged and mostly stylish unit with some serious flaws and underwhelming performance, the MSI Titan 700 ‘micro’ desktop is really only suitable for businesses that have multi-user XP licenses. If you do want to use it as a media center, you’ll have to be very careful what content you run.