We’ve long been fans of passively cooled mid-range graphics cards here at the TrustedReviews offices. As well as being a simple step towards creating a quiet PC for the office/games room, they’re the perfect addition to Home Theatre PCs (HTPCs). They not only ensure silent operation while playing a DVD or watching TV, they also provide the horsepower to play games on your HDTV – after all, why play FIFA 07 on your poky little computer screen when you can sit back in your favourite chair and play it on your huge TV?!


It comes as no surprise then that the passively cooled XFX Fatal1ty 8600 GT, that I looked at last week, received a recommended award. Its looks, performance, and of course silence were all suitably impressive and we’d have been happy to have one populating our Media Center any day. However, today I’m looking at what can only be considered a direct rival to the XFX card, the MSI RX2600XT. 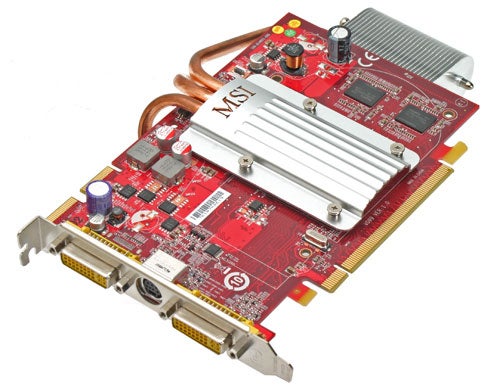 Based on ATI’s HD 2600 XT graphics chip coupled with 512MB of GDDR3 memory and priced at £95.14 (guideline price), the RX2600XT is around £10 cheaper than the XFX Fatal1ty 8600 GT and carries a very similar feature set. Both cards have similar gaming performance (which we’ll look at in detail later), dedicated video decoding engines, two dual-link DVI outputs, and large passive heatsinks. Of course there are some subtle – and some not so subtle – differences but essentially it’s a straight out fight between the two. 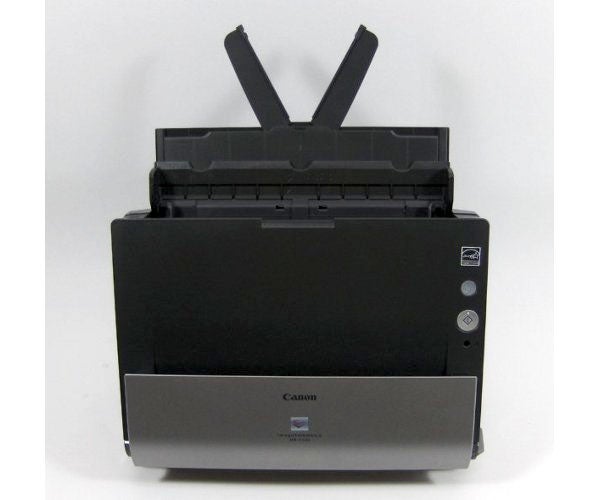 The MSI RX2600XT comes packaged in a surprisingly large box considering the size of the card. Thankfully it’s not just empty space filling the gaps and the card is well supported by a substantial block of foam rubber. The rest of the box’s contents are less well catered for and rattle around inside but as the various cables and dongles aren’t vulnerable this shouldn’t cause too much concern.

Moving onto the card itself, its stand out feature is the large fanless cooler that encircles a large proportion of the card. As with the Fatal1ty card this cooler relies on heatpipes to quickly draw heat away from the graphics chip and round to the large array of aluminium radiator fins suspended over the back of the card. By using a large enough surface area of fins the cooler is able to disperse the heat fast enough to do without a fan. 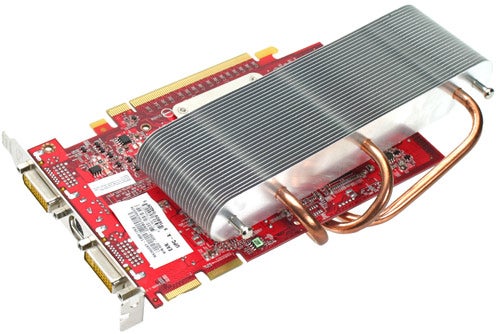 Unlike the Fatal1ty card, the RX2600XT uses three heatpipes to draw the heat away from the core of the graphics card and it would seem this extra pipe coupled with the larger radiator makes quite a difference. When tested under load, the core/radiator temperatures of the RX2600XT were 50/47 which is much better than the toasty 75/68 temperatures we saw on the Fatal1ty 8600 GT. However, because the card doesn’t expel any hot air (like the large dual-slot coolers on more expensive graphics cards) your PC case will need ample ventilation to allow the hot air to escape. Also, the size of the cooler means you won’t be able to fit this card in the super slim cases often used for set top HTPCs, though most normal sized desktop and tower cases shouldn’t have a problem.


Without the oversized cooler, the card would be quite petite as the PCB is only 168mm long and 111mm tall. However, the fins extend a further 40mm beyond the end of the PCB and add an extra 30mm to the cards depth. Also, the height of the fins above the bottom of the card (32mm) may be a concern as when mounted in a motherboard the fins may interfere with the other components on it.

For some reason the fins on our particular example are slightly lopsided which rather ruins the look of the card. Indeed, in terms of looks, the whole card is not a patch on the Fatal1ty card. The mismatch of a red PCB, copper heatpipes, an aluminium radiator, and yellow plastic DVI ports is not unpleasant but neither is it particularly attractive. If you’re going to use one of these cards in an HTPC, this probably isn’t too much of a concern as it’ll be well hidden but if you like to show off your hardware you may be slightly disappointed with the MSI board.

Except for the low end 2400s all of ATI’s latest lineup of graphics cards have near identical output configurations, which consist of two HDCP compliant dual-link DVI connectors and one HDTV-out connector that can output either component or composite and S-Video (using the included dongles). By combining the DVI connections with either DVI to VGA or DVI to HDMI dongles (one of each is included in the box) you have a huge number of connection options at your disposal. 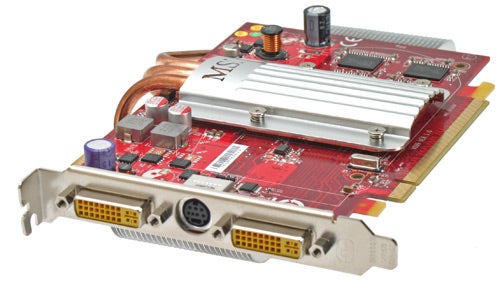 As we’ve mentioned before, having HDCP compliant DVI ports is essential if you plan on using your graphics card to playback protected high-definition video (i.e. commercial HD DVD and Blu-ray discs), which is something you’re very likely to do on an HTPC. At the moment most nVidia boards below the 8600 GTS don’t have HDCP compliant ports so they’re no competition on this front. However, we’ve heard that in the next few months most board partners will be offering this on nVidia’s entire range of cards.


As with all of ATIs current range of graphics cards the RX2600XT is completely CrossFire capable and two connectors for the CrossFire interconnects sit in their usual place on the top edge of the card. Curiously, though, no interconnects are included in the box.


Another great feature of this new range of cards from ATI is the cableless audio pass through. This retrieves the audio signal from your sound card straight from the PCI-E bus and passes it out to the DVI ports which, when combined with a DVI to HDMI adapter, can be connected to a TV for a one cable A/V connection. Some of nVidia’s cards are offering a similar feature but they require you to pass a separate cable from your sound card to the graphics card to achieve the same result.

Both nVidia and ATI have video decoding capabilities built into the silicon of their latest graphics chips and the MSI RX2600XT is no exception. By offsetting the computationally intensive task of decoding high-definition video, these free up the CPU to perform other tasks like run a virus scanner or record a TV program. To test this we watched the Blu-ray edition of Casino Royale on our usual test bed loaded with an Intel Core 2 Duo X6800 (with one core disabled) and monitored the CPU utilisation. Throughout our viewing, the CPU utilisation hovered around 25 per cent which leaves plenty of spare processing power for other tasks. Disabling the hardware acceleration checkbox in Cyberlink Power DVD saw the CPU usage shoot up to 100 per cent, and frames start to drop, so the effectiveness of the assisted decoding is clear to see. It really does make for an impressively simple setup to just add a Blu-ray or HD-DVD drive and this card to any old PC and be able to play full 1080p video – it’s such a shame the drives are still so expensive.

Of course, this talk of passive coolers, video decoding, and audio pass throughs is all very well but if the RX2600XT can’t pull its weight in games it’s all a bit academic. So, without further ado let’s look at how it performs.


To put the performance scores in perspective we compared it to five other cards for which we already had comparable results – a Radeon HD 2600 XT, a Radeon HD 2600 Pro, a GeForce 8600 GTS, a GeForce 8600 GT, and of course the XFX Fatal1ty 8600 GT. We tested the 3D performance of each card by running our usual set of benchmarks on our standard test bed, the details of which are in the table below. Bar Company of Heroes, these all run using our in-house pre-recorded timedemos taken in the most intense sections of each game. For Company of Heroes we use the in-game graphics benchmark, which we’ve found gives a good representation of the performance of the game.

As these cards are all less than £150 it is unlikely you will be combining them with a 24inch (or higher), £400+, monitor, so we’ve stuck to resolutions of 1,280 x 1,024 and 1,600 x 1,200 which represent more common 17/19/20inch monitors. Each resolution is run with 0x FSAA with trilinear filtering, 2x FSAA with 4x AF and 4x FSAA with 8x AF, while all other in-game and driver options are kept to their maximum. Each setting is then run three times and the average is taken, for reproducible and accurate results.

Call of Duty 2 is traditionally a weak spot for ATI’s cards and the RX2600XT hasn’t bucked this trend. Having said that, none of the cards really exhibit playable framerates at any of our tested resolutions so you will need to lower in-game settings to play this game satisfactorily.


In contrast to the other games tested, Company of Heroes really seems to take advantage of the extra stream processors present on ATI’s cards as they consistently lead the pack by some margin. And, as Company of Heroes can happily be played at around 30fps, all the settings we tested at will be just about playable on the RX2600 XT. 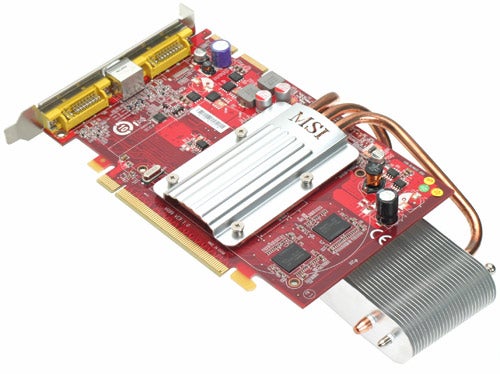 
The MSI RX2600XT ticks all the multimedia boxes you could wish for while maintaining a solid level of gaming performance and it’s all wrapped up in a completely silent package. If you’re looking for shear gaming performance, the XFX Fatal1ty 8600 GT may be your best bet but for its multimedia capabilities the RX2600XT would get my vote everytime.

We used the full version of Call of Duty 2, patched to version 1.2 for our testing. All in game settings were set to their maximum apart from anistropic filtering and anit-aliasing, which we varied for different portions of our testing. SLI optimisation was also turned off, as we weren’t testing any dual card configurations. Our benchmark is based on a custom demo that involves both indoor and outdoor scenes from one of the most intense sections of the game.

We used the full version of Counter-Strike:Source for our testing. All in game settings were set to their maximum apart from anisotropic filtering and anti-aliasing, which we varied for different portions of our testing.


Our benchmark is based on a custom demo recorded using the cs_militia map. There are a lot of trees on this map so it makes heavy use of transparency anti-aliasing when this feature is turned on. However we haven’t chosen to use this in our testing today.

We used the full retail version of Company of Heroes patched to version 1.7. All in game settings were set to their maximum expect for anti-aliasing and anisotropic filtering which were varied throughout our testing.


The game is set outdoors so there is heavy use of transparent textures for representing foliage and fencing. Therefore turning on transparency anti-aliasing has a big impact on performance. However, on this occasion we didn’t test with this technique turned on.