The MSI P7N SLI motherboard uses the new Nvidia nForce 750i SLI chipset so let’s get straight to the silicon at the heart of the matter.


Although we had a few issues with the nForce 600 family of chipsets due to their price and colossal heat output you knew exactly what you were getting in each case. The 680i SLI supports three graphics slots, the 650i SLI supports regular SLI and the 630i does none of the above as it has a single graphics slot.


Love ‘em or loath ‘em the 680i SLI and 650i SLI chipsets have been your only options if you want to run dual Nvidia graphics cards in SLI with a Core 2 processor. As a bonus Nvidia recently added Tri-SLI driver support for the 680i SLI which might appeal to the handful of rich gamers who can afford three 8800GTX or Ultra graphics cards.


The 600 chips are due for an update so enter stage left the nForce 700 chipsets. It’s hard to think of these chipsets as a family as there are only two members. The 780i SLI replaces the 680i SLI while the 750i SLI takes over from the 650i SLI. There’s no mainstream chip as Nvidia cannot compete with the superb Intel P35 chipset. 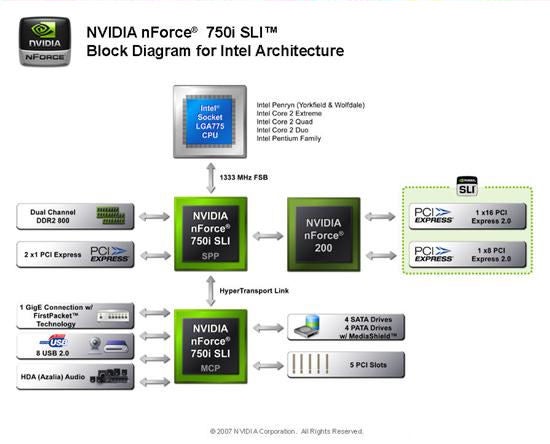 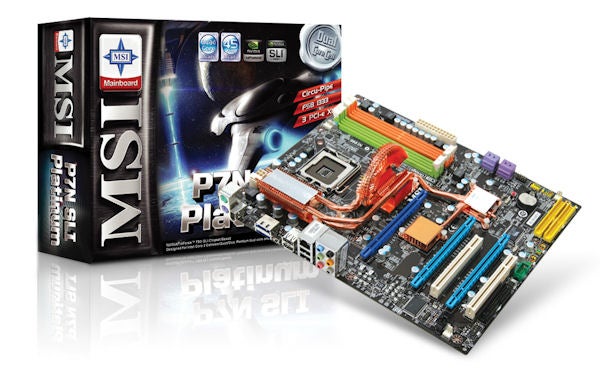 You can tell that from the photo of the MSI P7N SLI by reciting the mantra ‘If it’s blue it’s 2′ as all three PCI-Express slots on the MSI are blue in colour. The main slot is dark blue and delivers 16 lanes of PCI Express 2.0 while the other two slots are light blue and supply eight lanes. If you use SLI the main slot drops in bandwidth so each graphics card gets eights lanes of PCI Express but because it’s Gen 2.0 you won’t suffer a bottleneck in performance. According to Nvidia you can’t use the three slots in Tri-SLI as that privilege is reserved for the 680i SLI and 780i SLI so the third PCI Express slot will be for other duties such as a TV tuner, RAID card or audio card.

With three chips to control MSI has employed a Circu-pipe cooling system that is more extensive than the system we saw on theX48 Platinum and X38 Diamond. The heatpipes link coolers on the power regulation hardware, Northbridge and Southbridge in the usual way but there’s also an extra heatpipe that connects to a fourth cooler on the PCIe Expander chip that is located between the two graphics slots. 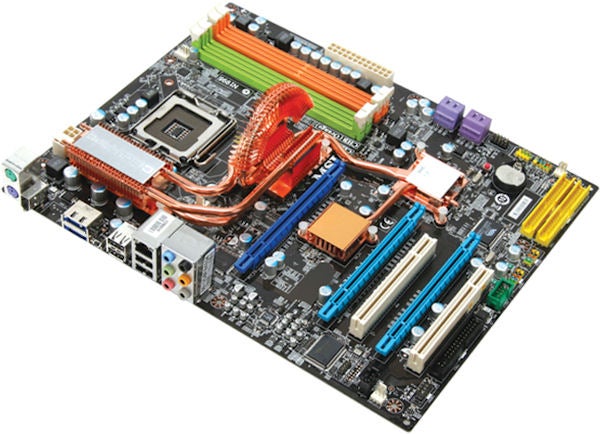 Unusually for a modern motherboard, the P7N SLI has two IDE connectors and we can’t for the life of us think why – one’s plenty enough. Not only this but for some reason MSI has located them at the foot of the board next to the floppy connector, which guarantees you’ll have to trail the ribbon cables across the top of your graphics cards. There’s enough space next to the main power connector for at least one connector but presumably the storage controllers need to be located near the Southbridge. The four SATA connectors are laid down so they don’t interfere with larger graphics cards and the rest of the layout passes without comment.


Moving to the I/O panel, we see a bit of a mixed bag as the array of ports and connectors has some welcome extras but also lacks a few basics. We like the two eSATA ports and the CMOS reset switch but the limited number of USB ports makes you realise what has been sacrificed to add these extras. Also, the inclusion of PS/2 ports for both mouse and keyboard is unnecessary as most peripherals now use USB. Including the old PS/2 keyboard connection can be useful for accessing the BIOS if, as is often the case, the motherboard decides to not recognise USB but not so the mouse. The rest of the ports are standard fare with one Firewire port, six mini jacks, an optical output for the Realtek audio, and Gigabit Realtek LAN rounding things off. There is a bracket that carries two extra USB ports and a mini Firewire, which partly makes up for the limited number of these connections on the I/O panel but we’d prefer not to sacrifice a whole expansion slot just for the privilege. 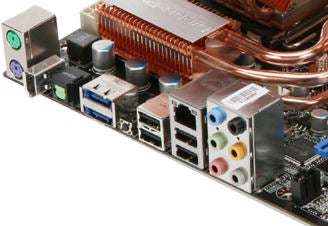 Before I started testing the P7N SLI I had to update the BIOS from v1.0 to Beta P04 which is something of a pain. The MSI Live Update utility hasn’t noticeably improved in the past year and cannot be used to select a BIOS file for an update so you’re limited to whatever is on the MSI server and that’s not much good with early hardware. Instead we had to boot into DOS to update the BIOS with a flashing utility, which was thankfully fairly painless.


I used two processors for testing; the first is a Core 2 Duo E6750 as I’ve got some comparable figures on an Asus P5N-T Deluxe with 780i SLI chipset and I also used a QX9650 Penryn. For graphics I used a single 8800GT and then plugged in a second 8800GT to run SLI. The MSI delivered the same performance as the Asus which rather suggests that you only need to consider the 780i SLI chipset if you’re intent on running Tri-SLI.

Overclockers will have spotted mention of the Clear CMOS button on the I/O panel but I had no need to press it at any time during testing (further adding to our annoyance at the I/O panel arrangement). Make no mistake I locked the thing solid a few times but if you cycle the Power button four times without successfully booting into Windows the BIOS will judge that overclocking was a failure and reset the speeds to default levels. It saves loads of time and means that you don’t have to mess about resetting the date and time and disabling any features that you don’t want to use. This is definitely something we would love to see on all motherboards from now on.


The BIOS is generally quite good although you adjust the front side bus in steps on the ‘adjusted’ speed such as 1,333MHz or 1,400MHz when the multiplier actually works on a ‘true’ speed of 333MHz or 350MHz. There’s a certain amount of confusion as the BIOS indicates the current CPU frequency, front side bus and memory speeds but it is at the top of the screen and not alongside the figures you are changing. The other oddity is that our 1,150MHz DDR2 memory defaulted to a low clock speed of 666MHz. That’s a simple 2.0x multiplier on the 333MHz front side bus of the E6750 but it seems very cautious as Kingston KHX9600 will easily run at 800MHz on standard voltage and zips up to 1,066MHz with a sniff of some extra volts.


There’s a full set of voltage adjustments but it’s not as easy as it might be. The CPU voltage adjustment is based on the standard voltage in steps of +0.0125V so you don’t enter a value such as 1.35V. The problem is that you need to know where you are starting from before you pump an extra 0.1V or 0.2V into your new Penryn. Memory, VTT FSB, Northbridge and Southbridge voltages are entered as absolute numbers such as 2.10V which is preferable to my way of thinking. 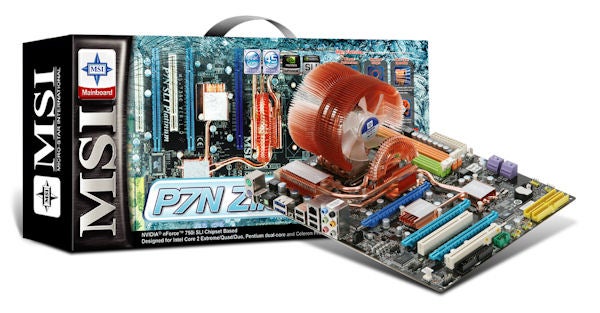 Overclocking wasn’t much fun as the front side bus would barely budge on standard voltages and the E6750 wouldn’t quite reach a 400MHz front side bus so the maximum stable speed was 3.16GHz. The QX9650 processor is an Extreme Edition which opens up the option of changing the clock multiplier however the MSI didn’t want to play ball and I couldn’t raise the speed at all. It’s worth noting that the 780i SLI Asus P5N-T refused to run with the QX9650 at all when it was on the test bench one month ago. This suggests that the combination of the chipset and BIOS are to blame and further development will yield benefits.


MSI is selling the P7N in a bundle with a Zalman NP9500 cooler under the Zilent name. This is something we’ve not seen before and it certainly seems a bit strange but knowing the NP9500 is a very good cooler we certainly wouldn’t discourage anyone from investing in the package. In fact, currently the bundle is retailing at a couple of shops for around £30 less than the board alone so it’s a very good deal indeed.

If you plan on running SLI the MSI P7N is a decent motherboard, even though the IDE connectors are in a hopeless location. Those of you who feel that one graphics card is plenty should stick with the P35 chipset.