As we head into this week’s review of the MSI P45C Neo-FIR it is intriguing to see the way mainstream Core 2 motherboards have fallen off the radar. We still see exotic specimens such as the Zotac GeForce 9300 ITX WiFi, the Asus P5N-VM WS with integrated Quadro FX 470 workstation graphics, and the ASRock N7AD-SLI that supports dual Nvidia graphics cards in SLI. Regular P45 models, however, are thin on the ground.


It’s a strange phenomenon when you consider that Core 2 Duo and Core 2 Quad have been the natural choice for gamers for coming up for three years. A quick look at the products on sale at your favourite on-line retailer will show some two dozen models of P45 motherboard so this family of products is clearly still very popular. The problem – as far as we reviewers are concerned – is that P45 is nearly one year old and it will not be updated by Intel. The plan is to supersede Core 2 with Core i5 later this year so the P45 chipset lives in a sort of twilight where it sells steadily with the minimum of publicity. 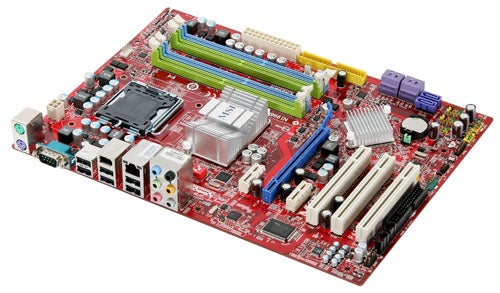 At first glance you may wonder why MSI sent us the P45C Neo-FIR as it looks, dare we say it, a bit boring. There’s a single PCI Express 2.0 graphics slot and passive coolers on the P45/ICH10R chipset without any sign of the eye catching heatpipes that are so common. The area around the LGA775 CPU socket also looks remarkably basic as this model only has three power phases for the CPU. We have grown used to seeing as many as 16 phases, such as on the Asus P5Q Deluxe so the huge amount of fresh air around the CPU comes as something of a bolt from the blue.


For some reason MSI has seen fit to include three LEDS above the memory slots so you can see whether the P45C Neo-FIR is operating in one, two or three phase mode. It is a mystery why anyone would especially care about this one way or the other. 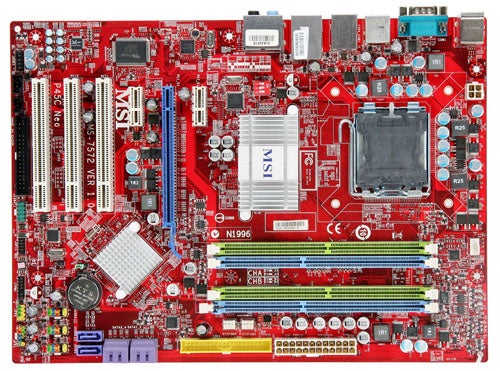 The logic is that you may have some expensive DDR2 in your stack of hardware that you are loath to chuck away or you may be reluctant to make the change to DDR3 but we feel this argument is tenuous at best. Head to Crucial’s website and you’ll find that you can buy 2GB of DDR2-1066 or DDR3-1333 for the same £30.


Ordinarily we’d say that you would be wise to spend £30 to ditch your existing DDR2 and make the switch to DDR3 as the drop in operating voltage from 1.8V to 1.5V saves a useful amount of power and the extra clock speed offered by DDR3 is also worth having. However, during our testing we found exactly the opposite to be true with the MSI. On Auto settings in the Windows desktop the system drew 110W at the socket with DDR2 which increased to 120W on DDR3. Under load the figures were 190W and 220W respectively which is an enormous difference.

When we manually set the CPU and RAM voltages in the BIOS we saw the same sort of difference in power draw for the two types of memory. When we overclocked the CPU the gap closed slightly but it remained the case that the DDR3 set up was drawing more power than DDR2 which is little short of weird.


Another oddity was the range of memory speeds that were available in the BIOS. By default our Corsair XMS2 1142MHz DDR2 was happy to run at 800MHz but refused to ‘overclock’ to 1,066MHz, despite feeding it the necessary 2.1V, so we settled for 1,001MHz which is the next notch down. By contrast our OCZ DDR3-1333 Platinum behaved impeccably and ran at the correct 1,333MHz speed and 7-7-7-20 timings without any input from ourselves. Unfortunately the extra memory speed didn’t yield any significant increase in performance and there was still that pesky rise in power draw to consider. 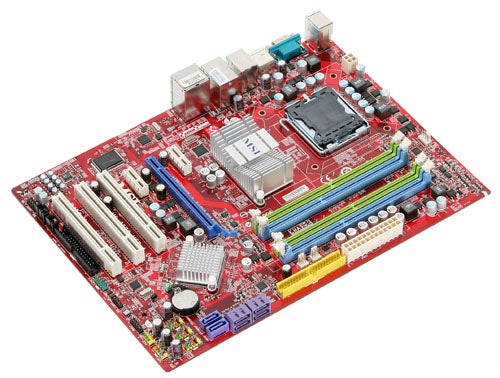 This was all rather disappointing so we took a turn around the block and checked out the other features on offer. We have already mentioned the single PCI Express 2.0 x16 graphics slot which has a 1x slot on either side. In addition you get three PCI slots so there is plenty of scope for upgrades. Below the bottom PCI slot there is a floppy connector and running across the bottom of the board there’s a Firewire header and three headers that support up to six USB 2.0 ports. However you don’t get any brackets in the box that make use of the headers.


The six SATA connectors are slightly unusual as four of the connectors are laid down to keep the cables out of the way of even the beefiest graphics card while the fifth and sixth connectors stand vertically. The layout works perfectly well but it’s a puzzle that MSI didn’t lay down all six connectors.


The two power connectors are a doddle to reach and the CPU fan header is positioned at the top of the board however the two case fan headers are located between the IDE connector and the outermost memory slot. If you have an IDE optical drive you may well find that connecting up a fan is a fiddly job.

And so we come to the I/O panel. The two legacy PS/2 ports are fine as are the six USB 2.0 ports, one Firewire, Gigabit LAN and six audio mini jacks. We are left cold by the sight of a legacy Serial port as it has no obvious role to play in a Core 2 PC. We know that some industrial plants still use Serial to connect to production equipment but it seems unlikely that these people will be fussed about the choice of DDR2 or DDR3 memory. The space would surely be better filled with a digital connector for the integrated audio or perhaps two more USB ports.


You pay MSI a £5 premium over the price of the DDR2 P45 Neo-F or Neo3-FR for the privilege of using either DDR2 or DDR3 on this hybrid motherboard. The problem is that DDR2 runs at a non-standard speed and DDR3 draws more power when it should in fact save juice.