Anyone looking for a motherboard to support their Penryn Core 2 processor should have an Intel chipset at the top of their shopping list. Well OK, you might want to use SLI graphics in which case it’s Nvidia silicon all the way but most of us will be very happy with Intel’s new P40 series of chipsets. At the high end there’s not much to separate X48 and P45 apart from the number of lanes of PCI Express 2.0 that are fed to the two graphics slots. X48 gives you 16 lanes per slot while P45 only manages eight lanes per slot when using two graphics cards. That sounds significantly worse – indeed it sounds like half – but it doesn’t really matter because we’re talking about PCI Express 2.0 which has oodles of bandwidth.


You can buy P45 models such as the Asus P5Q for £80 that have a single graphics slot but we had to wonder, if you don’t want dual graphics slots do you need a P45 at all?


We decided to investigate the junior members of the P40 family as they haven’t received much attention. Apart from CrossFire graphics the P45 chipset also supports DDR2-1333 memory or you can have P43 that supports DDR2-1066 or a P41 that limits you to DDR2-800. There are other differences so a P43 is unlikely to support SATA RAID and a P41 will only have four SATA ports instead of six.


Be honest, does that sound like much of a limitation? We don’t think so either so we rustled up an MSI P43 Neo, which is so similar to a P45 that when we peeled the ‘P43 Neo’ sticker off the board we could see the PCB is printed with a ‘P45 Neo’ legend. Now that’s what we call cost cutting. 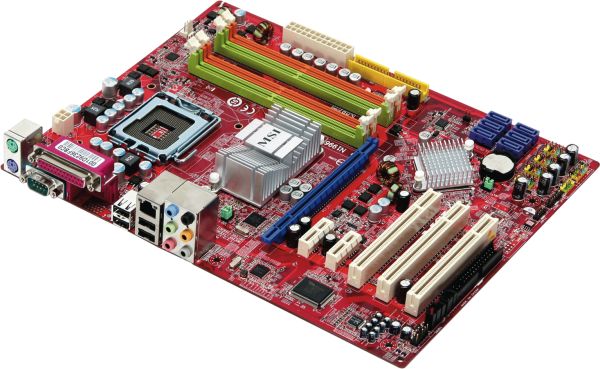 You can buy an MSI P45 Neo-F for £76 from Overclockers but we struggled to find the P43 Neo on sale in the UK as it is such a new model. The only outlet that had it listed was komplett.co.uk at £59 but that use of the past tense is significant as it has just shut most of its European websites so we’re working with an MSI SRP of £61.24. That’s a clear saving of £15 over the P45 Neo so let’s take a look at what you get for your money.


You can see practically everything that the P43 Neo has to offer at a single glance. The chipset coolers are small, passive aluminium items that leave the power regulation hardware uncovered. There’s a single PCI Express 2.0 graphics slot that sits above two PCI Express x1 slots and three PCI slots. The floppy connector sits at the foot of the board in an inconvenient location which rather suggests that no-one will want to use it.


That’s fine as we all use USB memory keys these days so have little use for archaic storage devices. However, the modern theme isn’t one that continues throughout the rest of the board – the I/O panel is a right throwback to the dark ages.

There are two PS/2 ports for the mouse and keyboard, one Serial port, one Parallel port, four USB 2.0 ports, 10/100 Ethernet and six mini jacks for audio. The inclusion of legacy Serial and Parallel ports may suit some people and you might not be fussed about the absence of eSATA and Firewire on a budget motherboard but there are still grounds for complaint. There’s no digital output for the audio, there are only four USB ports and the lack of Gigabit Ethernet looks a bit strange these days. Although there are headers on the P43 Neo for eight more USB ports there are no brackets in the package so you’ll be relying on case-mounted ports.


With so few components to accommodate you’d expect that MSI would do a good job with the layout and in the main you’d be right. The six SATA connectors stand vertically but there’s plenty of room to connect the cables and the same is true of the power and IDE connectors which are accommodated in the top half of the board where it is easy to plug them in. The only gripe is that the graphics slot is rather close to the memory retention clips.


Although the P43 Neo is a cheap motherboard we wanted to treat it as a proper piece of hardware so we installed a Core 2 Extreme QX9650 processor with 2GB of fast Corsair DDR2 memory and an MSI GeForce 8800 GT graphics card. With the processor humming along at its standard 3.0GHz the P43 Neo delivered the same performance as its bigger brother P45 Platinum. 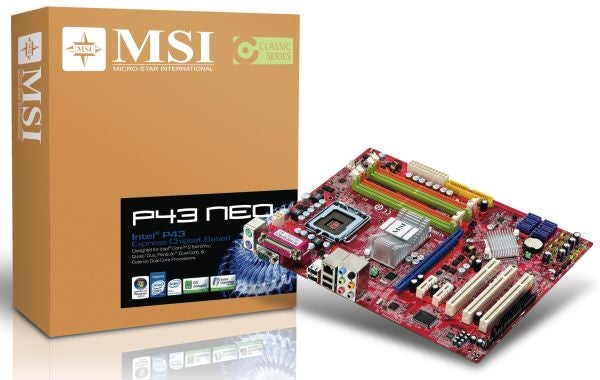 When you glance at the test results this similarity may not be immediately apparent as the graphics element of PCMark05 can act erratically. Our GeForce 8800 GT generally delivers 17 or 18 thousand marks but occasionally it turns in a score of 13,000 which is exactly what happened with the P43 Neo. This has an impact on the Overall PCMark05 score but doesn’t affect 3DMark06 which is all very strange but the upshot is that the P43 Neo delivered the goods despite appearances.


Things were altogether murkier when it came to overclocking. We’d had no problems changing settings to turn off the BIOS splash screen, set the boot order, adjust the memory voltage up to 2.1V and to change the memory ratio to get the speed up to 1,066MHz. Although the BIOS looked much like every other MSI we had seen in recent times we were unable to adjust the front side bus and clock multiplier. Or rather we were able to make the changes and save the settings but they had no effect so the CPU remained stuck at 3.0GHz. It doesn’t take a huge stretch of the imagination to blame this matter on the BIOS and to assume that it will be fixed in short order.


At a push you could build a budget Core 2 Duo or Quad PC around the MSI P43 Neo but the list of features is so short that your are unlikely to save any money in the long run. Bring it down to £50, or below, and our interest will be piqued.