Back in May, Intel released its highly anticipated new mainstream chipset, the P35. Codenamed ‘Bearlake’, it’s a direct replacement for its previous mid-priced part, the P965, and brings with it support for DDR3 memory, new 45nm processors, and Intel Turbo Memory.


Retail boards based on the new chipset are now widely available and there are still many boards based on P965 around so we thought it would be a good time to compare these two platforms and find out whether there’s any performance increase to go along with the new features of P35. 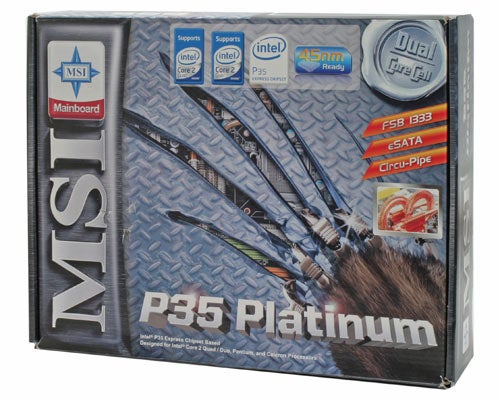 The board I’m looking at today is the P35 Platinum from MSI. It sits slap bang in the middle of current pricing for P35 boards, having a very sound feature set but without the fancy extras of the more expensive boards. For comparison I’ve chosen the P965 based Asus Commando, which is more of an enthusiast’s board with a price tag to match. Currently the MSI board can be found for as little as £111 while the Commando board is still demanding a hefty £135. This is testament to just how successful the P965 chipset has been but as P965 begins to be phased out you should see the Commando’s price drop. As both boards support DDR2 memory we can eliminate as many variables as possible in our testing. Later on in the month I’ll have a look at the possible performance advantage of moving to DDR3.


Before I get onto the specifics of the board though, let’s talk a bit more in-depth about the new features that P35 has or, in some cases, doesn’t have.


As mentioned, P35 supports both DDR2 and DDR3 with speeds topping out at 1,066MHz and 1,333MHz respectively. Some boards are supporting both memory types so you can stagger your upgrading by buying a new board now and upgrading your memory later. However, it is likely these boards won’t quite perform as well as their single type brothers, as it’s easier to optimise a BIOS for one memory standard rather than both – especially when it comes to overclocking.


Though the CPU socket stays as LGA 775, the new chipset has dropped support for old Pentium 4 CPUs and has been completely optimised for the Core CPU architecture. This should hopefully translate to improved performance and lower power usage. 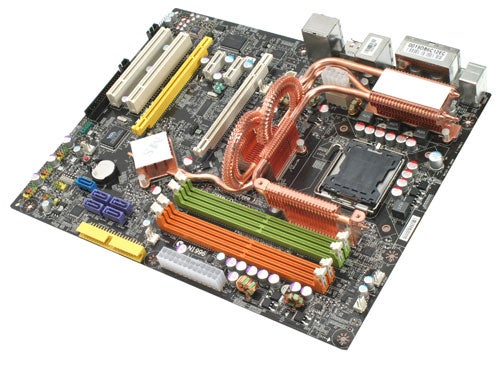 Even though P35 has seen a move to PCI-Express 2.0, you are still limited to just one full speed PCI-E x16 slot. However, just like with P965, Crossfire is supported with the same throttled x16 and x4 configuration. Some reports have suggested there is little performance impact when using this throttled version of Crossfire so don’t let this put you off. That said, if I were using Crossfire, I’d still prefer to go for a 975x based board, which uses two x8 slots, or wait for X38 which has two x16 slots.


Unfortunately, Turbo Memory modules are not going to be available for sometime yet – some reports even suggest we’ll be waiting until next year – so this isn’t something we can test. This was one of the most anticipated features of the new chipset, at least for the TR staff, so it’s a shame we won’t be seeing it for a while. However, it is Intel who are delaying the availability so no blame can be aimed at MSI.

As well as all these ‘northbridge’ improvements, P35 also brings with it version nine of the Intel Controller Hub (ICH) ‘southbridge’. This new version includes everything from ICH8 plus a few extras. You still get six SATA 3Gbps ports – with support for RAID 0, 1, 5, and 10 – and six PCI-Express x1 ports, but you now also get twelve USB 2.0 ports. There will be three versions of ICH9, either vanilla ICH9, ICH9R which includes Intel Matrix RAID support, ICH9DH (Digital Home) that has RAID and Intel Viiv technology, or, ICH9DO (Digital Office) which includes RAID and Intel vPro.


Moving onto the MSI P35 Platinum itself, the first thing you notice are the rather elaborate heatpipe structures that adorn the northbridge, southbridge, and power circuitry. Now, I’ve seen plenty of these heatpipe arrangements before, but never one with loops! The reason for their being is apparently just to increase surface area, the same reason the fin section, just next to the memory slots, is there. It would seem that whatever the reason, the heatpipes do their job and suck heat away from the chips with ease – you’ll just need to make sure there is some airflow through your case to remove the hot air from around the heatsinks. Even with this great mass of copper surrounding the CPU area, I didn’t come across any problems fitting any of the coolers in our office. 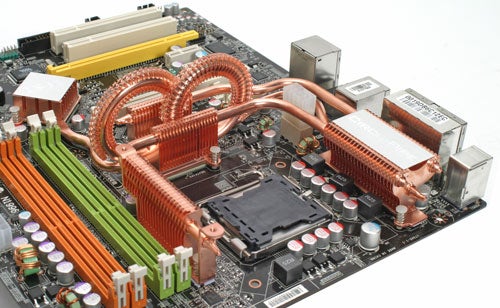 The PCB is coloured in a fetching black (well it does go with everything, darling!) and a fair number of the ‘standard’ ports and connectors are finished in a contrasting white. The remainder of the ports are a whole mix of colours, the majority of which signify some sort of useful distinction. However, one exception did catch my eye. The way the memory slots are coloured would suggest if you’re using two memory sticks they should both be placed in either the green or the orange slots but this isn’t the case. There should, in fact, be one in each colour for optimal performance. 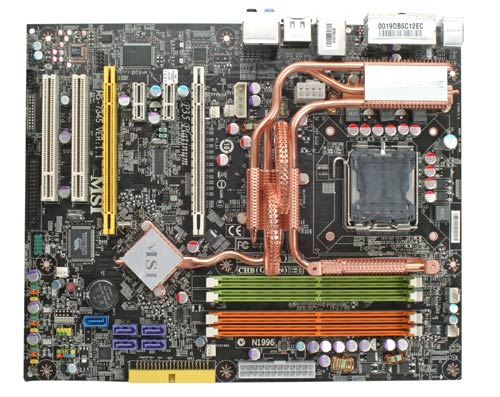 Having removed support for legacy IDE connections from their own ICH southbridge chips, Intel is relying on board partners to add in extra I/O chips to perform this function. For those of us with old IDE CD/DVD drives, thankfully MSI has chosen to add in a Marvell 88SE6111-NAA1 chip to provide support for a single IDE connector and extra 3Gbps SATA port. This extra SATA port is coloured blue and positioned away from the other SATA ports, helping to distinguish it. This is useful for making sure you don’t accidentally try and use it as part of a RAID. Though, as a result of its positioning, you may find it interferes with your second graphics card if you’re running Crossfire.


The only other concern we had with the layout was the 8-pin power connector that sits between two heatpipes. An adapter is provided to elevate the connector so you can reach it but if you forget to use it, the connector is near impossible to remove.


An octuple of LEDs is positioned just left of the CMOS battery. These are used to indicate whether the board is functioning properly – green for working, red for not working – which is very useful if you’re experimenting with overclocking.

Although there are three USB 2.0 headers on the motherboard, there are no USB expansion card brackets provided to take advantage of them. This seems particularly strange as a Firewire bracket is included in the box but it only houses a single Firewire port – leaving ample room to fit a couple of USB ports. It’s not too much of a problem, though, as there are already six USB ports housed on the back panel already. 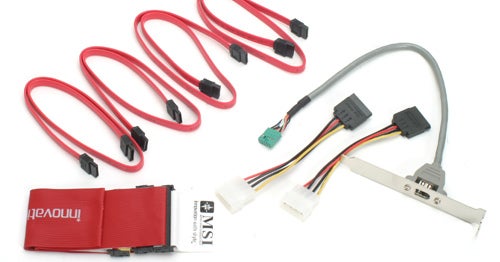 Aside from the two PS/2 ports for keyboard and mouse, all legacy connections have been removed from the back panel. In their stead are an extra two USB ports and pair of eSATA ports. Along with these you get a full set of six 3.5mm jack sockets to provide analogue audio I/O and an optical SDPIF output is available to pass audio processing onto an external device. There’s also one Firewire port and a single Gigabit Ethernet port rounding out the connection options. 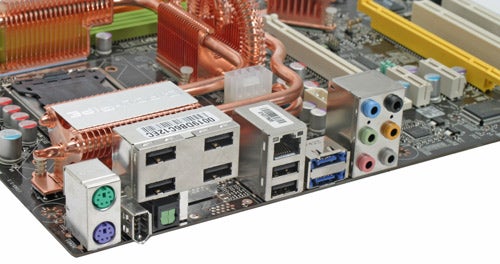 Looking at the BIOS, there are all the usual options there with plenty of adjustments for overclocking. For those new to overclocking, MSI has its own D.O.T overclocking utility that will automatically increase your system speed up to a maximum of 20 per cent. You can apply it to both PCI-Express and CPU separately. If you want to do things manually there are options for manipulating the FSB, PCI-E Frequency, CPU Multiplier, and memory timings as well as their corresponding voltages. FSB maxes out at 500MHz which should be enough for all but the most avid of overclockers.


To test performance we used our usual set of components, namely an Intel QX6800 quad-core CPU coupled with 2GB of Corsair CMX1024-6400C3 running at 800MHz with latency settings of 3-4-3-9. We ran our usual set of 2D tests, which consist of automating some everyday tasks in a single and multi-tasking environment and timing how long they take to complete, you can find a full explanation of each task here. 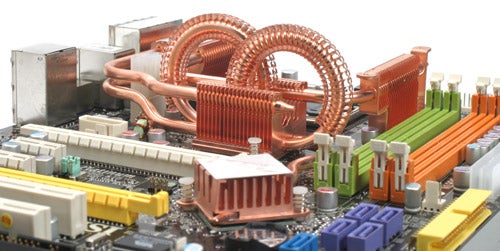 It’s pretty obvious that P35 brings little to the table, in terms of performance, over P965 and the choice really comes down to features. This is slightly disappointing but not wholly unexpected and the new chipset still has enough going for it to be the obvious choice over a P965 based board.


P35 brings many new features to the table, though many of them we have yet to see the benefit of – DDR3 and TurboMemory, and gives as good performance as it’s predecessor. So, as long as boards aren’t priced above their P965 counterparts – which at the moment they aren’t – then they’re the obvious choice.


As for the particular MSI board I’m looking at today, the only fault I can find is with the meagre bundle but, for the price, that’s forgivable. The board looks good, has a decent layout, passively cooled chipset, plenty of overclocking options, rock solid stability, and adequate performance. You can’t really ask for much more.