The MSI Media Live Diva 5.1 uses the AMD Maui design to deliver a Home Theatre PC (HTPC) motherboard unlike anything we have ever seen before. 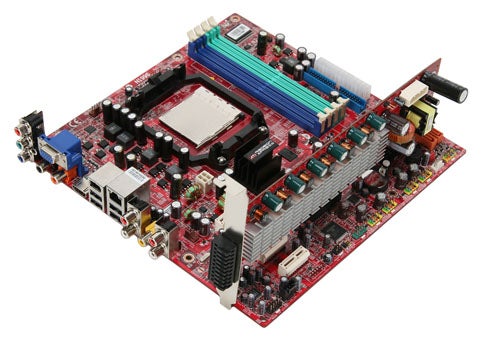 Most HTPC motherboards rely on the features in the chipset to deliver a video signal over VGA, DVI and HDMI while the audio comes through the usual mini jacks plus optical or coaxial S/PDIF. We have reviewed motherboards that use the current crop of IGP chipsets – AMD 780/790, Intel G45 and Nvidia 9300/9400 – and they all handle 1080P video decoding very competently without any need for an add-in graphics card.


The Intel offering is the weakest of the trio but you can happily use an AMD or Nvidia chipset to watch Blu-ray or H.264 movies without any significant load on your processor. This means that you can specify a low powered CPU that requires minimal cooling, which keeps the PC both cool and quiet, without worrying whether it is up to the job of playing HD movies.


If you build a PC around an integrated motherboard and connect it to your HDTV using HDMI you will get a perfect picture but the audio may let the side down. It is possible that you will be happy to use the speakers in your TV but the more discerning aficionado would prefer a proper surround sound system in which case an S/PDIF feed to your Hi-Fi amplifier or receiver is the best bet.


Some manufacturers have addressed the audio side of things such as Asus with the M4A78-HTPC/RC which is a variation of the Asus M4A78T-E with the addition of stereo RCA audio.


The point is that most HTPC motherboards bear a striking resemblance to the motherboard you’ll find inside almost any integrated PC but the MSI Media Live Diva is a completely different proposition. It is built around the M780G chipset which is the mobile version of 780G and it supports most AMD Socket AM2+ processors with DDR2 memory. There is a PCI Express 2.0 graphics slot so you have the option of adding a graphics card but realistically this is an irrelevance for anyone buying the MSI as the integrated HD 3200 graphics will be sufficient.


On board there is a Realtek ALC888 audio chip, which is completely conventional, but there is also a second audio chip and that is most unusual. The chip is a D2Audio DAE-3 that is more typically used to add home theatre features to HDTVs so we’re talking about a serious piece of silicon.


We’ll come back to the DAE-3 chip in a moment but first we’re going to take a look at the I/O panel which is unlike anything you have ever seen. 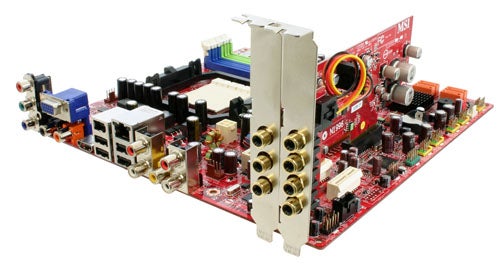 A tiny amount of space is taken up by four USB 2.0 ports, Gigabit LAN and a Firewire port while the rest of the space is given over to video and audio connectors. The video connectors consist of VGA, HDMI and Component which is fairly unusual. We vaguely recall seeing Component on a motherboard or two in the past but it is certainly quite rare. Unfortunately MSI doesn’t include an HDMI-to-DVI adapter which is a shame as that would cover every significant option under the sun.

On the audio side of things we have coaxial S/PDIF input and output connectors and for the first time in living memory there are no audio mini jacks. Instead the analogue connections are five RCA audio jacks which should please anyone who wants to feed their audio to a Hi-Fi receiver.

The third audio option is really unusual. The DAE-3 chip is positioned at the foot of the motherboard next to an expansion slot that has been cobbled together from a PCI Express x1 slot and a x4 slot that is designed to accept a 5.1 channel 100W per channel amplifier card that is part of the MSI package and which gives the Media Live Diva 5.1 its full name. The amplifier looks similar to a passively cooled graphics card and comes with both full height and half height brackets, which is ideal if you’re using an HTPC chassis that sits under your TV or in a Hi-Fi rack. The amplifier supports five regular unpowered Hi-Fi speakers that you connect with the usual cables although the thickness of the cables is limited by the relatively small size of the ten grub screws and holders. On the plus side MSI has simplified the task of attaching cables by accommodating the holders in an adapter block so you can attach the cables and then plug in the block without fiddling around at the back of your new HTPC.


MSI lists a second variant of the Diva which is the 7.1 model although we cannot find it on sale. The 7.1 pre-amp replaces the 5.1 power amplifier with a pair of low profile pre-amplifier cards that feed a 7.1 signal to your receiver which ensures the signal is high in quality.


With the 5.1 system it is quite uncanny hearing your speakers burst into life when they are only attached to a PC and it means that you can do away with a bunch of cabling between your HTPC and amplifier. Alternatively you can take a bold step and do away with your Hi-Fi in its entirety as the Media Live Diva can play all of your media (apart from vinyl) using just the one box. 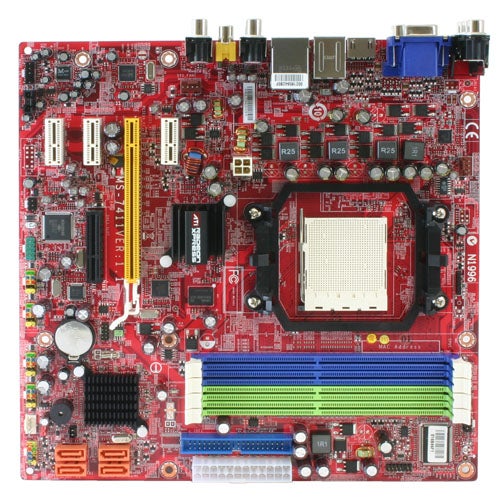 Although we have been mightily impressed by the thought and innovation that has gone into the Media Live Diva we’re not completely won over. For starters there is the price. This is an expensive motherboard and it will cost at least £600 to build it into an HTPC once you factor in the cost of a Blu-ray drive, Windows Vista and a decent case from the likes of Antec.


The second thing is that we wish MSI had been able to use the 790G chipset with Socket AM3 as it uses even less power than 780G and runs cooler as a result. The problem here is that the Diva is an unusual motherboard so the development time has been lengthened with the result that MSI appears to be behind the times.


Then there’s the timing of the thing as most of us would probably wait to see how Windows 7 turns out before we dive in and build a Windows Vista PC. Fans of Linux are welcome to air their views on this point.


The MSI Media Live Diva 5.1 is the most innovative and imaginative Home Theatre PC (HTPC) motherboard we have ever seen and despite its high price it deserves serious consideration.