Nvidia’s nForce 780a chipset has had a long and troubled gestation period but the silicon has finally arrived and we have an MSI K9N2 Diamond on the test bench. It’s an AMD AM2+ motherboard that supports the Phenom processor and as this is an Nvidia chipset you won’t be surprised to learn that the emphasis is firmly on the graphics side of things. There are three PCI Express 2.0 slots so you can use Tri-SLI provided you have the necessary budget. The first graphics slot always gets 16 lanes of PCI Express and if you run SLI with two graphics cards the second slot also gets the full 16 lanes. If you go for Tri-SLI the second set of 16 lanes are split between the second and third slots and they get eight lanes each.


At first glance the 780a has a fair amount in common with the nForce 780i and 790i chipsets but in fact it marks a change in direction for Nvidia. 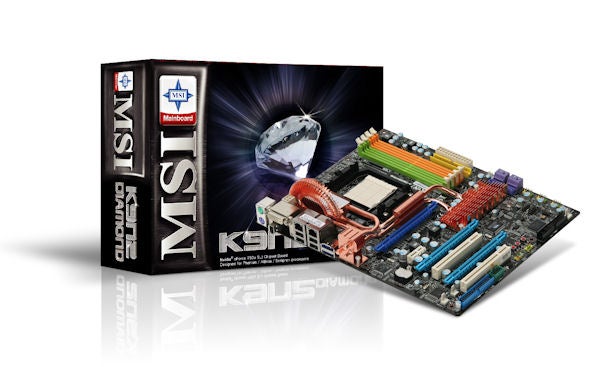 In the past it has been general practice for motherboard manufacturers to stick an integrated graphics chip on lowly Micro-ATX motherboards that are destined for cheap and cheerful mainstream PCs. High end gaming systems never use integrated graphics as the IGP takes up die space on the chipset, the outputs occupy room on the I/O panel and the whole lot adds to the cost of the motherboard. This combined with the fact integrated graphics are far too feeble for gaming means you will inevitably plug in one or more graphics cards, which disables the IGP and makes it redundant.


This all changes with the 780a as it introduces a new feature called HybridSLI which is actually two technologies in one. First we have GeForce Boost which is pretty much the same as AMD’s Hybrid Graphics technology. You have a lowly IGP as part of the motherboard chipset but when you plug in a graphics card the drivers combine the two chips in CrossFire or SLI. The benefit is fairly modest and only works if the graphics card is similar in performance to the IGP, so in the case of AMD you’re limited to a Radeon HD 3450 and with the K9N2 Diamond and other 780a boards you’re looking at a GeForce 8400 GS or an 8500 GT. That might be OK for playing Sims but it’s hopeless for the vast majority of games on the market.

The other half of HybridSLI is HybridPower. From now on you can expect every Nvidia chipped motherboard to include an IGP with graphics ports on the I/O panel regardless of how many graphics slots it has, although the name has changed from IGP to mGPU. In the case of the K9N2 Diamond the connector is a single DVI-D with an HDMI adapter supplied in the package. Connect your monitor to the IGP and your graphics cards will remain in stand-by until you put a heavy load on them, for instance by playing a game.


In principle it’s a fabulous idea that saves power and reduces the cooling load on your PC, when not doing intensive tasks, however the idea does have a few flaws. For one thing it is only supported in Windows Vista and for another the graphics card or cards have to be GeForce 9800 GTX or 9800 GX2 models. Now obviously, it’s early days and no doubt we’ll look back in a year or two when XP and the GeForce 8800 are long and wonder what all the fuss was about, but at present it’s a fairly severe limitation. 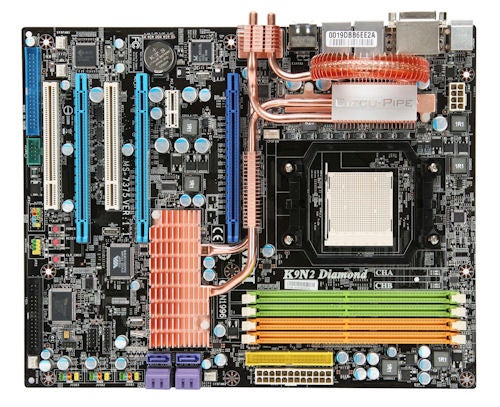 Also, saving power is welcome but in the Nvidia demo we were shown HybridPower didn’t have an automatic switch to kick your graphics cards into life and instead you had to tell the drivers that it was time to party. I don’t know about you but it’s precisely that sort of thing that I would forget to do until I’ve just started loading a game. So you have to wait until it’s loaded and closed again before you can switch the right graphics on.


The final problem, for the time being, is that HybridPower has only just been persuaded to work. Over the Bank Holiday weekend MSI was given BIOS code that will enable the feature in the K9N2 Diamond but the BIOS won’t be here for a week or two.


So what we have here is a Phenom motherboard that supports Tri-SLI and which will have HybridSLI in the near future. It’s a safe bet that anyone building a gaming PC with that sort of specification will walk right past the Phenom aisle on their way to some Core 2 Duo loveliness. Phenom is a reasonable choice for low to mid-range PCs but its place in a Tri-SLI PC is hard to justify. That said, while the board supports three graphics cards you can always use it with fewer.

We tested the K9N2 Diamond with a Phenom X4 9750 running at standard clock speeds and noted that MSI disables both the TLB fix and Cool ‘n’ Quiet in the BIOS by default. Although the Phenom was reasonably cool we had to add a case fan to keep the extensive chipset cooling system at a reasonable temperature. Left to its own devices the temperature would shoot up to 60 degrees, which is a little toasty for our liking.


Performance was uninspiring and overclocking was non-existent as we couldn’t even raise the reference clock from 200MHz to 210MHz. Instead we were limited to raising the RAM voltage so we could increase the memory speed from the default 800MHz to the maximum 1,066MHz. It’s best not to leap to conclusions on the overclocking front as we know for a fact that the BIOS will be updated very soon so there is every chance that the Phenom will gain some performance. 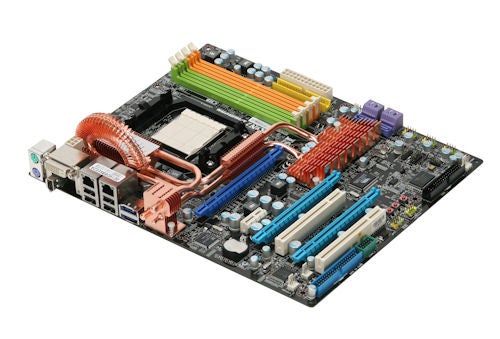 The list of features on the K9N2 Diamond is comprehensive with four USB ports, one Firewire and two eSATA on the I/O panel along with dual Gigabit LAN (do people really use two Ethernet ports? – ed.). There are also two more USB ports and a second Firewire on a bracket as well as two eSATA ports on a pass through bracket.


MSI includes a Creative X-Fi PCI Express riser in the package that uses the only PCI Express x1 slot on the board and the two regular PCI slots would be blocked if you use substantial graphics cards, not that this is unusual. There’s a single IDE connector next to the main power block and a second IDE connector at the foot of the board that is connected to the JMicron controller that runs the two eSATA ports. Add in micro buttons for Power, Reset and Clear CMOS and a handful of somewhat intense LEDs and you have a high-end gaming motherboard that delivers the sort of quality that you expect from MSI.


We’ll have to wait a week or two to see HybridSLI in action. In the meantime the K9N2 Diamond looks promising but there’s no hiding the fact that Phenom cannot match Core 2 Duo for performance.