If you’re looking to build a media centre system, or HTPC as they like to call them in the US, you’ve generally had to use a dedicated graphics card if you wanted to hook up to a display digitally. Intel, for its own reasons has never offered integrated solution with DVI. AMD though, has stepped up with a solution and the first example we’ve got our hands on it the MSI K9AGM2-FIH.


Based on the AMD 690G, it’s the first chipset to appear from AMD since the merger with ATI. It’s designed for the AM2 socket CPU and not surprisingly then it features integrated ATI graphics, complete with AVIVO quality. What’s more it features an HDMI socket with HDCP compliancy. Combined with the small micro ATX form factor you’re looking at a very nice solution for a media centre system. MSI also has the K9AGM2-F/L, a micro ATX board based on the 690V chipset, which is the same but omits the HDMI and DVI support. MSI will also have regular ATX versions with and without HDMI – the K9AG Neo2-Digital, and the K9AG Neo-F respectively. 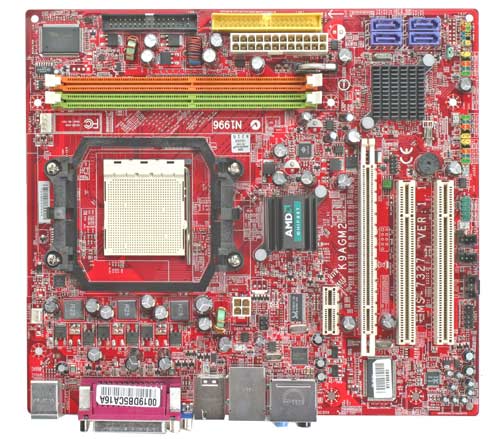 The suitability of this board for a media centre system is apparent when you look at the motherboard itself, with both the North Bridge and the SB600 South Bridge passively cooled. This means that aside from your case fan, CPU fan and hard disk, you’ll have no noise, which is nice. The North Bridge fan does have a rather tall passive heat sink, but it should not cause any fitment issues and is rather fetchingly adorned with the AMD logo. There are only two DIMM sockets on the board, but that should be absolutely fine for a board of this nature.


There are four SATA 150 ports on the board, and in the box you’ll find a SATA cable, a SATA to Molex power connector, an EIDE cable, a back IO shield and a driver disk. Looking round the back you’ll find a PS/2 and keyboard connector on the far left. Moving inwards you’ll find a mixture of very old, very new, and kind of in-between technologies, these being a parallel port, an HDMI socket, and a VGA connector. I actually find it surprising that parallel is still included on brand new motherboards as I can’t think of any use aside from connecting old printers. In a sense it’s a shame the space couldn’t have been taken up by a DVI connector instead, especially as the chipset itself is capable of simultaneous output of both HDMI and DVI. 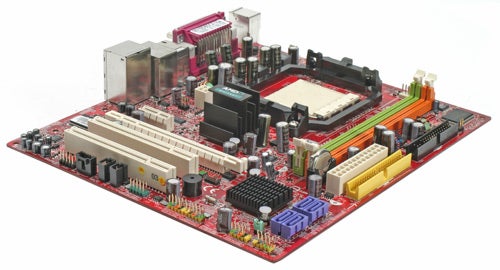 While the lack of DVI means that you can’t hook up digitally to many LCD displays, the HDMI connector means you can hook a system based on this motherboard to an HDMI equipped LCD or plasma TV. What’s great about having HDMI and audio on an integrated chipset such as this is that it can carry the audio from the sound chip without any external cables, as opposed to machines with discrete sound cards. It all helps make a simpler, tidier system that’s easier to set up.

The audio in question is a Realtek ALC888 offering 8-channel sound via six mini-jack sensing connectors. To the left of this you’ll find four USB 2.0 ports. There are pins for three more ports on the board, which could be used for extra rear or with cases with front mounted USB. The back panel also gives you one full size Firewire connector, which is still useful and there’s pin out on the board for another.


The extra brackets for USB or Firewire aren’t included in the package so if you do need to get hold of any of these you will need to get in touch with MSI directly – they won’t be available from any resellers.


The chip that provides Firewire on the board is a VT6308 by a certain company called Via – yes this board has Via technology on it. Perhaps that was why there was a sticker covering over this particular chip. Finally, there’s a Gigabit Ethernet connector too, which is good news if you want to integrate this system in a fast home network. 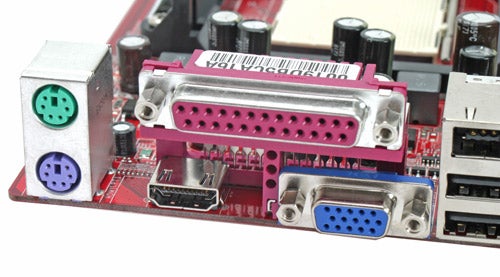 There is a single x16 PCI Express slot, accompanied by a x1 PCI Express and two PCI slots. There are four SATA ports down on the board with a 300MB/s interface.


Aside from the HDMI with HDCP compliancy, the star of the show is the ATI Radeon X1250 integrated graphics, which AMD claims is the fastest integrated solution on the market. AMD makes much of the fact that Intel’s current top-of-the-line integrated solution, the G965, has no support for many titles, and isn’t fast enough to play many others.


The X1250 meanwhile should enable undemanding users to play current games, albeit at the most basic settings. In addition it should deal better with the demands of Windows Vista’s 3D Aero interface. Perhaps the biggest asset of the X1250 to most purchasers of the board will be the AVIVO capabilities – with hardware acceleration of MPEG-2 and WMV, (but not H.264). This should deliver smoother, better quality frame rates without taxing the CPU, keeping the system cooler and more stable – just what you need for a living room system, which is likely to be in a small case and not necessarily that well ventilated.


A quick look in the BIOS showed a fairly straightforward choice of options, with Cool ‘n Quiet there to keep the system voltages and clock speeds down under low loads. You can specify how much memory is used by the X1250 graphics between 32B and 1,024MB but most will leave it on auto. 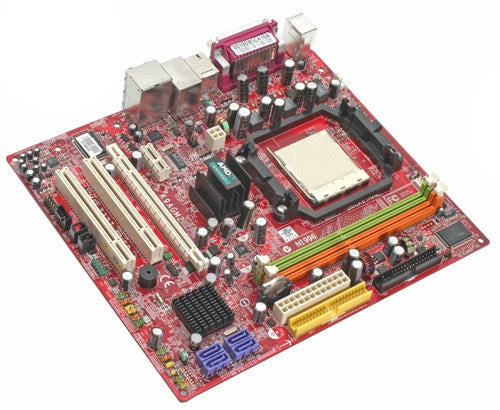 Layout wise there’s little to comment on – it all seems reasonably laid out. You could find that the floppy disk connector, should you use it, and the EIDE connector, probably for an optical drive, are a bit hard to get to inside a case next to the 24-pin power connector, while the 4-pin auxillary power connector is a bit too far into the middle of the board. It would have been preferable to have it closer to the edges so you don’t have to trail a cable over the CPU fan.

To test we used our usual set of benchmarks using an AMD X2 5200+, running at 2.6GHz and 2GB of Corsair CMX1024-6400C4 running at 800MHz with latency settings of 4-4-4-12. For comparison we selected an equivalent Intel system, with a Viiv motherboard and a CPU that comes out at around the same price as the AMD system. For this we used an MSI G965MDH, based on Intel G965 chipset and a Core 2 Duo E6300. The same hard disk and RAM was used on both platforms.


In practice however, the testing proved not to be quite as dramatic as we’d hoped. It turns out all our games, except Counter-Strike: Source, would only run on one or other of the systems which made comparison difficult. In this game then we found that at a resolution of 640 x 480 the X1250 far outstrips the capabilities of the Intel chip, which cannot even run the game at an acceptable frame rate. The Intel board would not run our Battlefield 2 and Call of Duty test but equally the AMD would not run Quake 4 or Prey. 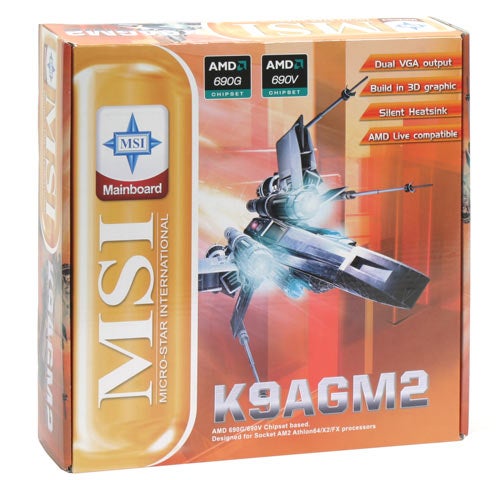 Clearly then neither of these is really up to high-level gaming, which is disappointing but not too big a deal. However, for something like the Sims ”(ed…noooooo)” or World of Warcraft on a large TV, this would be ideal. Still, gaming isn’t really where these are aiming and a PCI Express slot is available should you need it. On the upside the board proved reliable and sailed through our 2D tests without any crashes.


In 2D the Intel system proved to be faster on balance, but we already know about the prowess of Intel’s Core 2 Duo architecture. In practice the AMD board system is more likely to be fitted in a media centre system where a low voltage lower clocked CPU will make more sense.


On the performance front then only the Counter-Strike: Source test really shows the potential for this board, which means that it’s down to the HDMI port to lead as the star feature on this system.


The SRP for this board is just over £50, so it should be cheaper on the high street, making it a very affordable and attractive system. The performance is there should you need it, though we still wouldn’t recommend using it for anything but the most undemanding games. As an affordable media centre board though, it will do very nicely, though with the absence of a DVI port, we’d only really want to connect it to a suitably equipped TV or the BenQ FP241W.


A small, passively cooled, well featured motherboard, with the benefit of an integrated HDMI port that will pass through audio without cables. This is a fantastic feature to have for the price. If you’re hooking up to an HDMI equipped display, the MSI K9AGM2-FIH is a very powerful argument for going AMD.