The MSI GV62 7RC is a gaming laptop that costs only £829. That’s half the price of many more conventional gaming notebooks, and it certainly makes it a tempting proposition if you want portable playtime without having to spend bags of cash.

However, the lower price does mean compromise – in the form of a new Nvidia chip designed specifically for more modest gaming devices.

The MSI doesn’t break any new ground in the design department, but it does look good. The exterior is made from a brushed grey metal and the lid sports the familiar MSI Dragon Gaming logo.

The keyboard is illuminated with a red backlight, and the trackpad buttons are fringed in the same colour – as are the icons above the power and fan speed buttons, and the air vents at the rear. 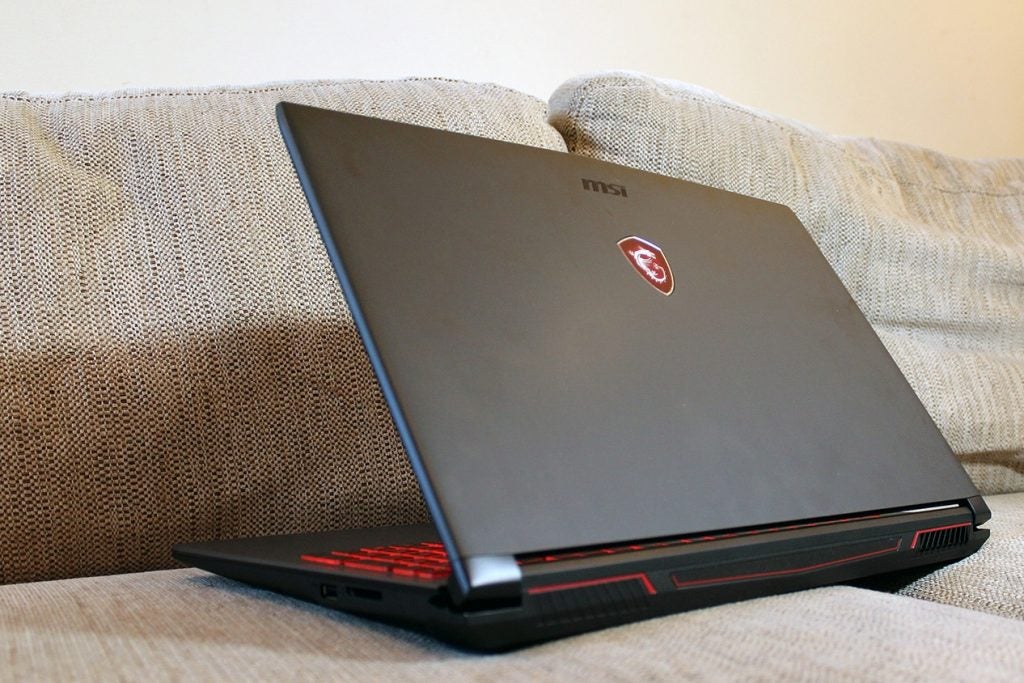 A grey-and-red colour scheme hardly pushes the envelope, but it looks better than the Acer Nitro 5.

The MSI looks smart, and its 2.2kg weight is 500g lighter than the Acer. This is enough of a difference to be noticeable when you’re carrying the machine from place to place.

So it’s significantly lighter than its key rival, and the MSI also offers greater versatility. The entire base panel pulls off to reveal access to the memory slots, storage, cooling hardware and battery – quite the opposite of Acer’s tiny component compartments. The MSI machine has a USB 3.1 Type-C port, a card reader and a DisplayPort output; the latter was missing from the Nitro 5.

The MSI does falter in some areas, though. Its body is 29mm thick, and it extends to 35mm once you include its rubber feet.

Build quality isn’t great, either. The plastic base panel can be pushed off easily, enough to touch the components and cooling gear. The plastic around the keyboard feels weak, and the desktop wobbles and distorts when pressure is applied to the rear of the panel. 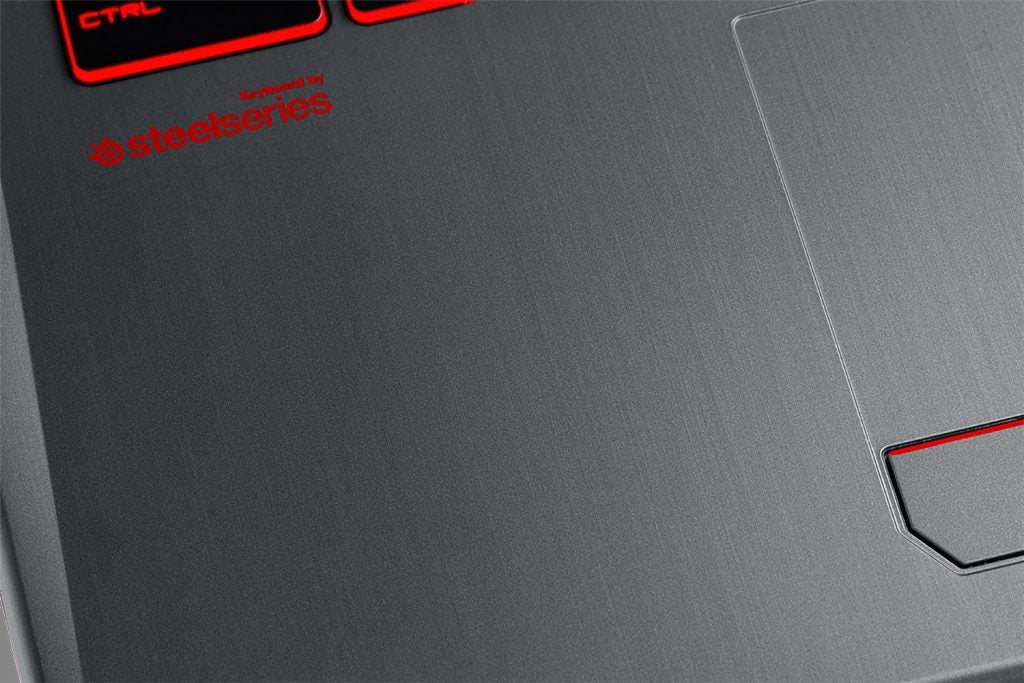 The poor build quality isn’t a terminal problem – it just means you’d be wise to carry the device in a protective sleeve when travelling. The Acer, too, was afflicted by similar concerns.

The MSI is lighter and more attractive than the Acer, and its internal access and port selection are better too. Build quality isn’t outstanding and the device is thicker than the Acer, but on balance I prefer the GV62’s design – and it’s certainly good for an £829 gaming notebook.

There’s nothing new about the keyboard on this MSI laptop. It’s the usual Scrabble-tile unit and, as ever, it’s provided by SteelSeries.

The buttons are large and comfortable: they push down with a consistent and soft action, and they offer a little more travel than the keys on the Acer. They’re quick and quiet, which makes them great for hammering out documents. 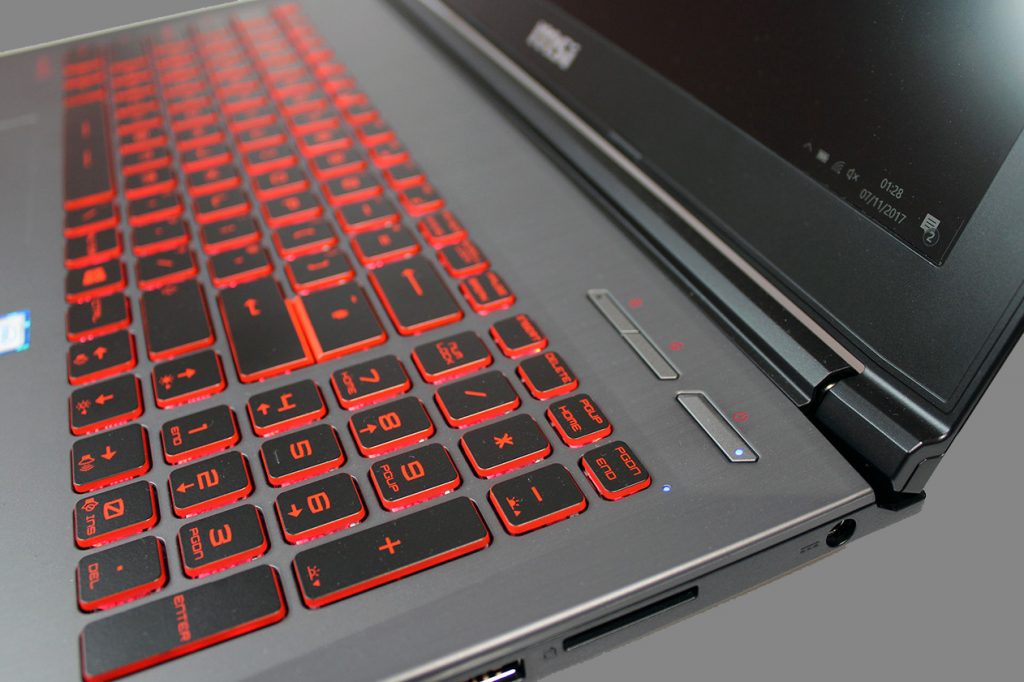 The comfortable, consistent action and soft metal beneath the keyboard make the MSI good for typing and for less demanding games, but serious players and keen eSports competitors will need something more substantial, with a firmer base and a more crisp typing action.

In addition, the MSI’s layout isn’t great either, with a single-height Return key and cursor buttons that aren’t separated. The trackpad’s two buttons are too soft – an issue that hampered the Acer too. Serious gamers will want to deploy a USB mouse.

The MSI’s screen is a Full HD panel devoid of any fancy syncing technology or a high refresh rate. It’s entirely standard for a screen in a modest machine.

It’s a TN panel, though, which means various differences when stacked up against the IPS screen in the Acer. TN screens don’t tend to have viewing angles that can compete with IPS, for instance, and colour reproduction on such screens is poorer too. They benefit from faster response times, however, which are good for gaming.

The screen technology is a bit of a mixed bag, then – and, unfortunately, so is the quality. On the plus side, colours are surprisingly good. The average Delta E of 0.37 is excellent, and the measured colour temperature of 6,967K is closer to the 6,500K ideal than the Acer managed. 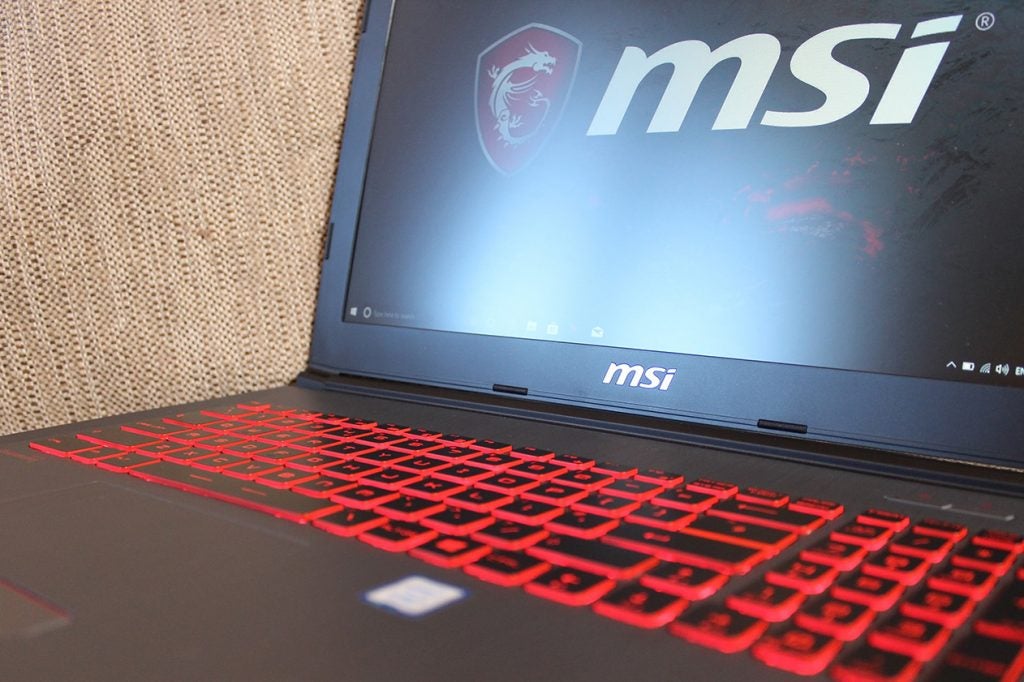 The screen renders an excellent 97.8% of the sRGB colour gamut. Uniformity levels are fine: the MSI’s screen lost around 12% of its brightness, while the Acer lost about 20% in the same test. The TN screen delivered great response times, with no sign of slow-down or stuttering during any test.

However, every colour on this screen is undermined by the dreadful contrast. The brightness level of 230 nits is low, but the black level of 0.73 nits is far too high – and those combine for a poor contrast ratio of 315:1.

As a result, it will be tricky to tell different shades apart, and it also means that colours will lack subtlety and depth. The poor black level will make black shades appear as underwhelming greys, and it will squash darker tones together.

The poor contrast and high black level will impact gaming and movies, with colours that look underwhelming and dark areas that don’t look as good as they could.

The MSI’s various screen modes didn’t help matters, with little to choose between the standard, movie and gaming options.

The poor contrast on this screen means games lack punch and depth, but at least their colours are accurate – something  the Acer couldn’t manage. Neither screen is particularly good, but at least both are fine for gaming.

The speakers aren’t anything to shout about. They’re not particularly loud, there’s barely any bass, and the top-end is tinny – although it’s clear rather than muddy, at least. I’d be inclined to always use a headset.