Huge, powerful and with a generous number of features, the MSI GT76 Titan has plenty going for it – but it's heavy, expensive and not for everyone

The MSI GT76 Titan DT 9SG lives up to its name: this monster weighs 4kg, and it uses desktop components in order to deliver unprecedented performance.

You’ll need strong shoulders and a sturdy backpack to cart this laptop around – but that’s not all. Costing a whopping £4000, you’re going to need a similarly robust bank account too.

There’s no denying the MSI’s gaming pedigree. You’ll find RGB LEDs in the keyboard, a row of lighting at the front, and yet more RGB LEDs on top of the huge air vents on the rear of the device.

The 4kg weight is paired with monster dimensions: the GT76 is 397mm wide and 42mm thick, making it one of the heftiest machines I’ve seen for some time. Conventional high-end laptops such as the Alienware m17 still only sits at 2.6kg and 21mm, and a more innovative model such as the Acer Predator Triton 900 weighs 4.5kg but is only 24mm thick. 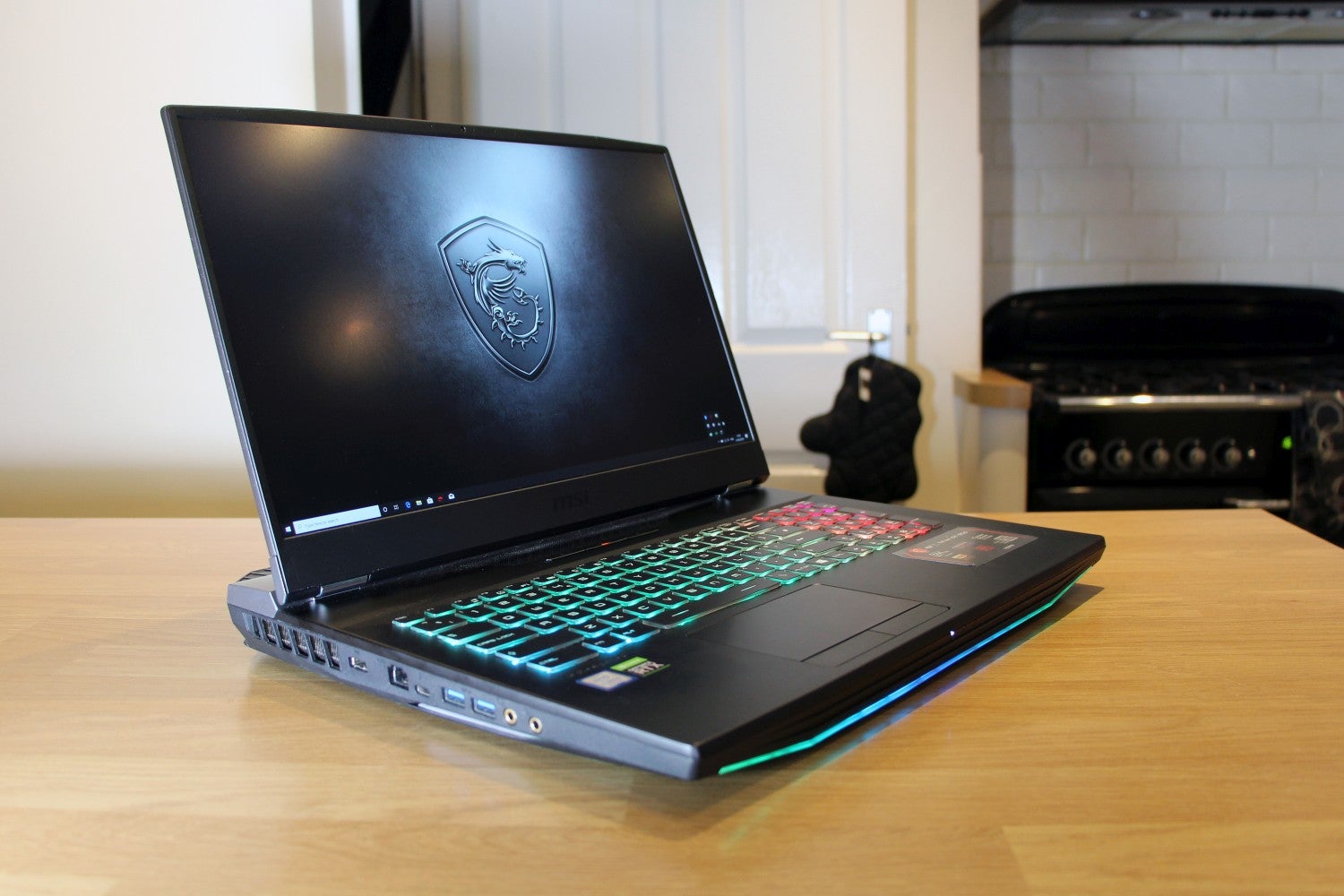 That 4kg bulk isn’t all you have to lug around. The MSI has two power bricks that contribute 1.8kg of weight. Add in a USB mouse and you’re looking at shouldering around 6kg of weight for gaming on the move.

The MSI does deliver fantastic connectivity, though. It has four full-size USB 3.2 Gen 2 ports and two Type-C connectors, one of which supports Thunderbolt 3. Display outputs are handled by HDMI and mini-DisplayPort, and there are two audio jacks and even a microSD card slot.

Accessibility to the internals is decent too, including the two spare memory sockets.

Although the GT76’s build quality is good, this device isn’t flawless. The wrist-rest and screen both move a little too much. The mesh plastic panel on the underside is flimsy, and of course being mesh is open to the elements.

The GT76 has a 17.3in 4K IPS screen, for a density level of 255ppi. As a result, games viewed on this screen look incredibly crisp.

That bodes well for single-player gaming, but note the refresh rate of 60Hz and a lack of syncing technology. While single-player titles will still look great at 60fps and can’t go much faster at 4K, this isn’t fast enough for playing high-level eSports. 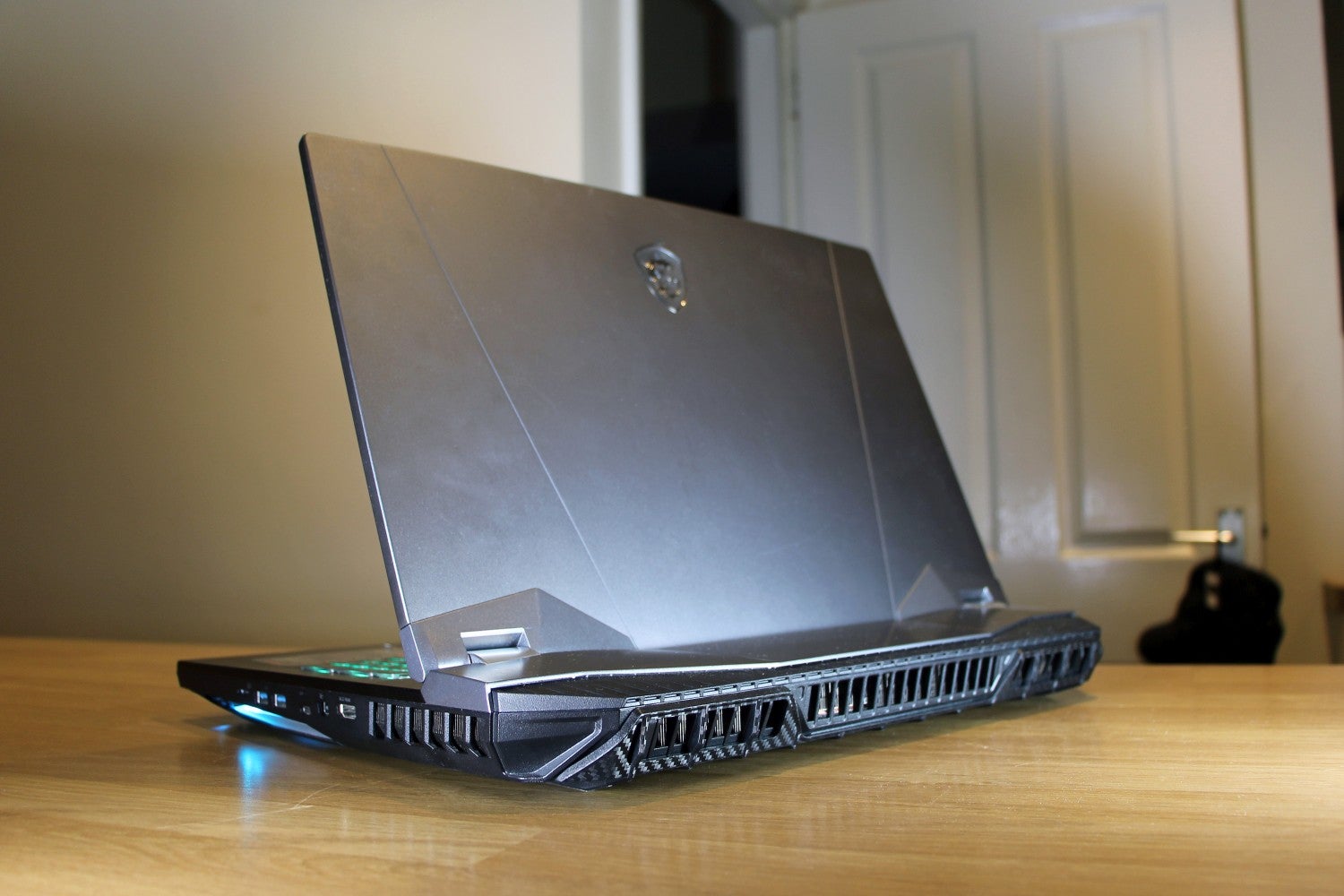 The MSI has a brightness level of 407 nits, which is significant – high enough for indoor and outdoor use. The black level of 0.35 nits is reasonable; it’s dark enough to deliver good variation and tone.

Those figures combine for a contrast ratio of 1163:1. That’s a great figure that delivers impressive vibrancy and punch. 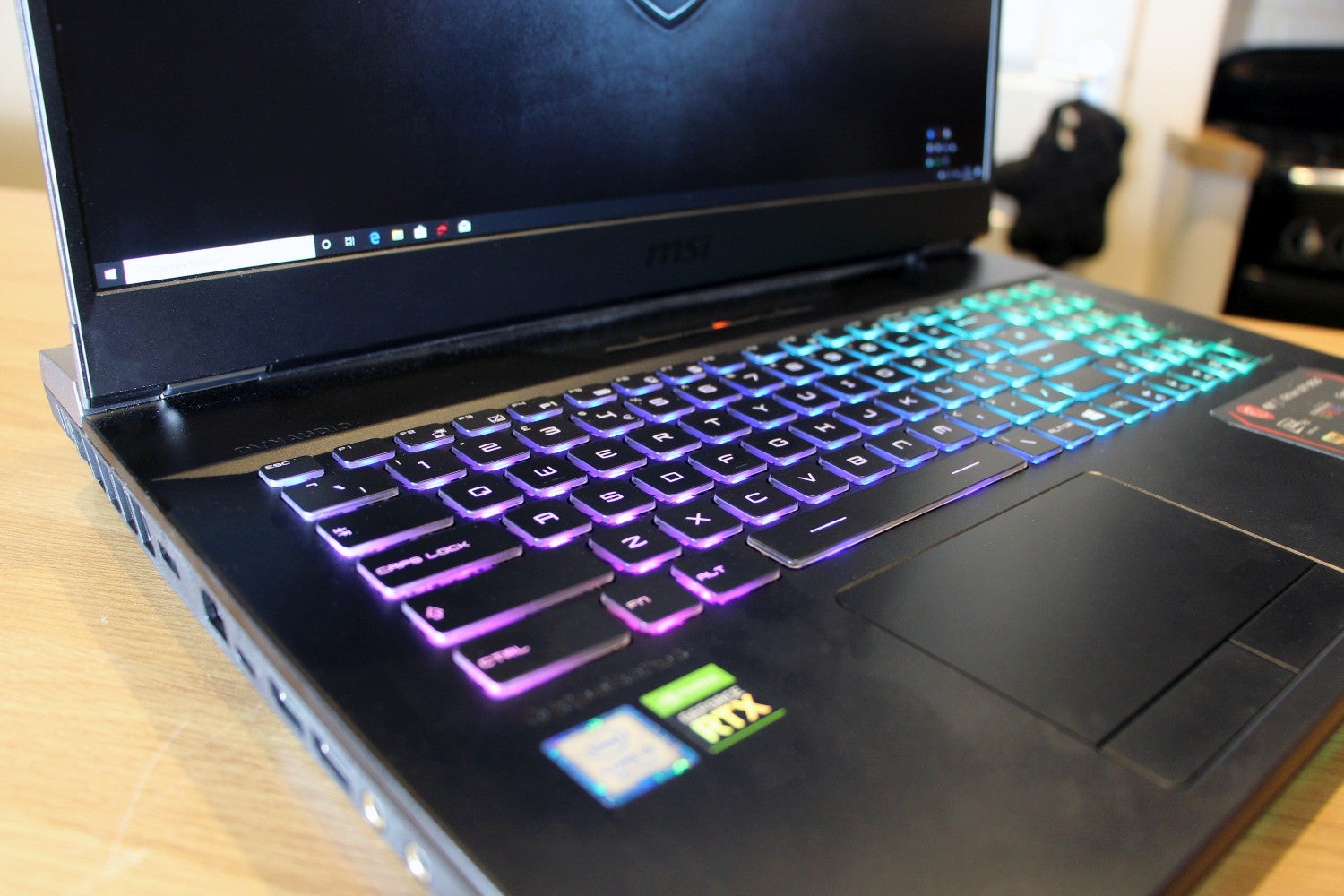 The speakers are middling: loud and bassy, but with a muddy high-end and a treble range that’s dominant but lacking in detail. They’re usable in a pinch, but a headset will be far better.

The MSI’s keyboard is a SteelSeries chiclet unit, which comes with per-key RGB LED backlighting and a separate number pad.

The buttons are reasonable: they’re quiet and consistent, and display a solid amount of travel. The buttons are relatively fast, and the sheer size of this machine means they have a solid base. 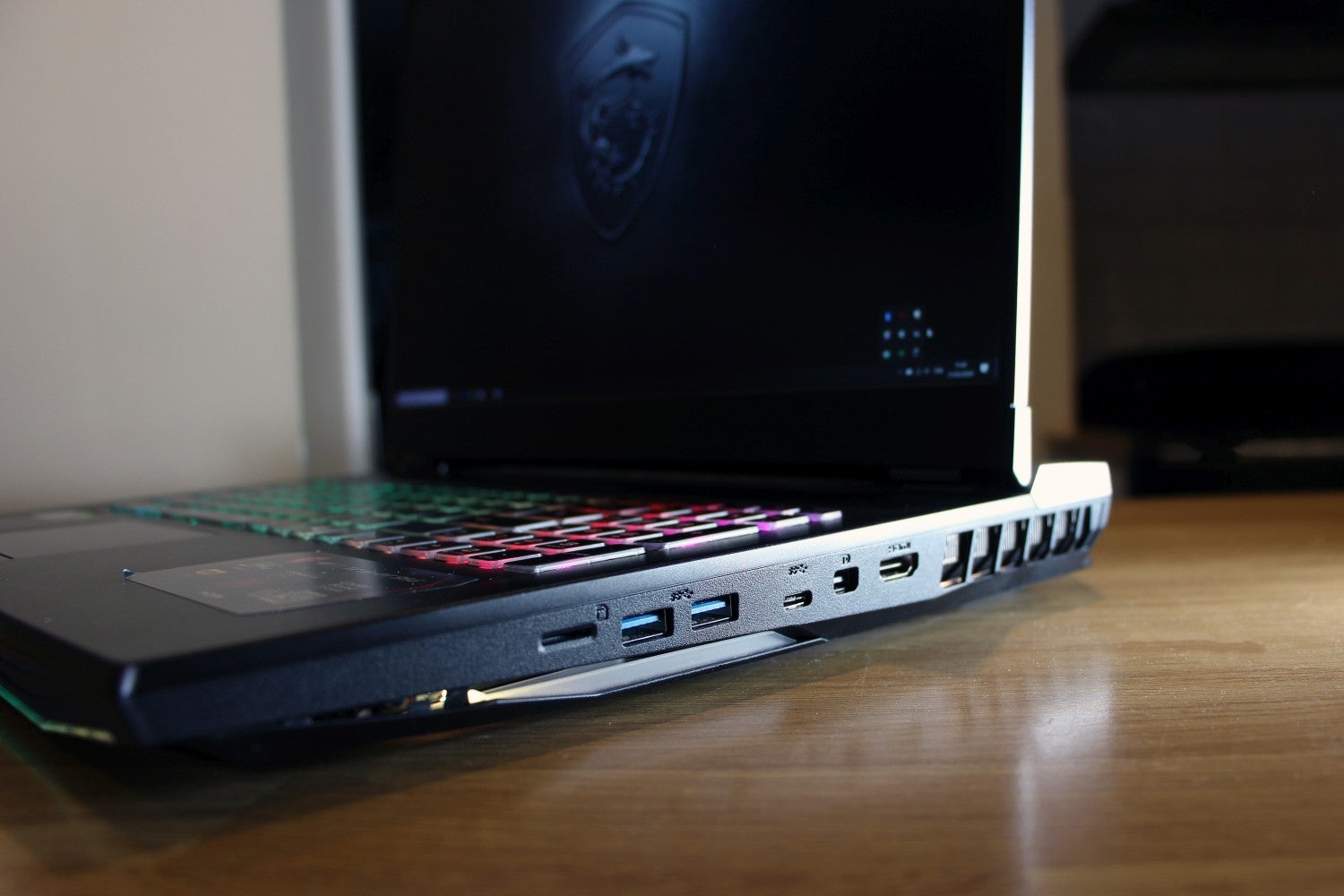 For mainstream gaming they’re absolutely fine, and just as good as anything else out there. However, chiclet keyboards don’t quite offer the speed, travel or snap of mechanical units, and this keyboard has slimmed-down number pad keys and no macro buttons.

The trackpad is fine, but the buttons are poor. Each button is hinged at the front and the centre, which means they’re shallow at the front but too spongy and deep elsewhere. A USB mouse is essential for gaming with this machine.

The huge MSI deploys heavyweight desktop components. The desktop version of the Nvidia GeForce RTX 2080 used here has the usual 2944 stream processors and 8GB of memory, and it’s overclocked in certain performance modes.

The Intel Core i9-9900K is another desktop chip, and this CPU has eight multi-threaded cores, a base speed of 3.6GHz and a theoretical boost peak of 5GHz.

It isn’t surprising that this specification delivered sensational performance. You’ll get the most demanding games running at 4K with minimal graphical compromise. A lot of games just won’t need any tweaking. Ray-traced games, VR headsets and widescreen displays are also no problem for the MSI.

There’s a gulf between the desktop RTX 2080 and the mobile RTX 2080 Max-Q used elsewhere, such as with the Alienware m17, but that’s hardly a fair comparison. The Alienware Area 51m is a more apt rival to the MSI, retailing for a similar price and also using desktop components. It saw better benchmark results for both the CPU and GPU than the MSI, but the Area 51m is limited to a Full HD screen.

That’s still incredible pace, enough to ensure that the MSI can handle virtually any work task including tough photo, video and content work. The two-SSD RAID array helps – its read and write speeds of 3188MB/s and 2884MB/s are excellent.

By default, the MSI uses its Comfort mode, which runs the GPU at around 1860MHz and the CPU at 4GHz.

The CPU and GPU are overclocked further in Sport and Turbo modes. Sport mode delivered a couple of extra frames in games and improved the MSI’s benchmark results. Turbo mode isn’t worth using, though; the CPU is pushed too hard, throttling to 3.6GHz and seeing a performance decline. That’s disappointing and it means that the i9-9900K never attains its theoretical 5GHz speed.

This isn’t surprising, though, given the GT76 is technically still a laptop – which means there are thermal concerns. The CPU’s peak temperature of 97°C proves that the chip can’t do much more, although that figure was recorded in a CPU stress-test. That’s an important consideration for CPU-heavy workloads, but the CPU won’t attain those temperatures during gaming. 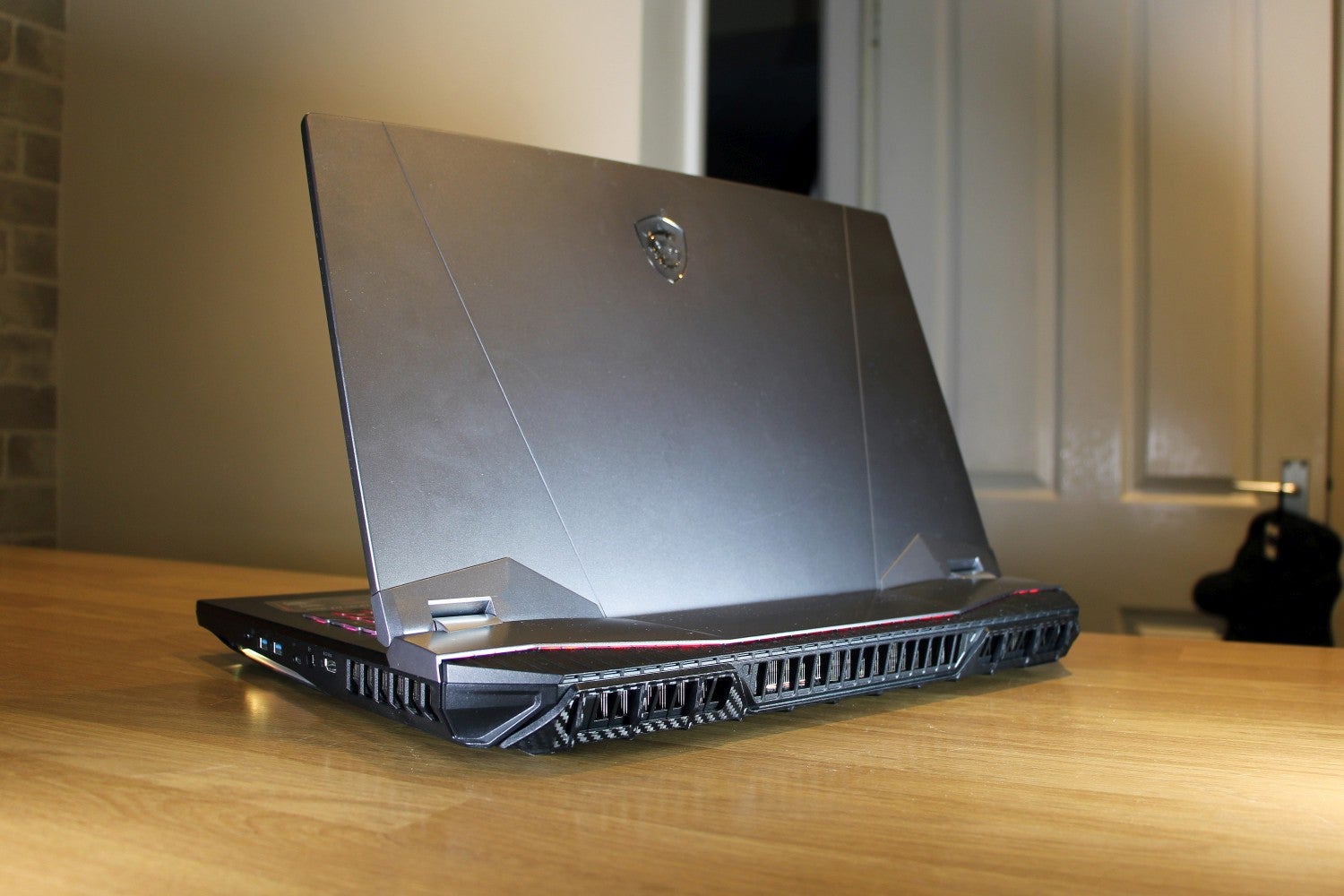 The MSI’s base stays cool when gaming, but hot air is ejected from the right-hand side and the area above the keyboard becomes hot. Neither issue is ruinous, but they’re worth noting.

The noise levels aren’t bad – this machine is noticeable but not intrusive, and no louder than conventional competitors.

Battery life is poor. The MSI lasted for just over two hours in a video and browser benchmark, and just under an hour when gaming. This is very much a device designed to stay at home, permanently plugged into the mains.

Should you buy the MSI GT76 Titan DT 9SG?

The MSI GT76 delivers huge performance, a great screen, impressive connectivity and accessible internals alongside. Build quality is decent – even if it isn’t perfect.

But this machine is expensive. The keyboard is decent rather than outstanding, and there’s no real battery life.

The size is the most prohibitive issue, however; but the MSI’s 4kg doesn’t rule it out – it’s still smaller, lighter and easier to transport to LAN parties than a desktop and a display, and it will fit better into compact spaces than a full-sized PC.

If you do need maximum power and don’t want to deal with a PC, then the GT76 could be a good alternative – it’s certainly fast enough. Just be aware of its huge size and eye-watering price.