MSI is one of those companies that can be relied on to bring out a new gaming laptop with every major hardware revision. It generally offers very good value, too, while not being hamstrung by ODM designs like Rock or Novatech. In fact when we looked at the company’s previous MSI GT627-246UK, the only real issues holding it back from a Recommended Award were its slightly unbalanced specification and unattractive design. Now we’re looking at the MSI GT740-021UK, a similarly priced 17in gaming laptop, to see whether it has rectified these mistakes. 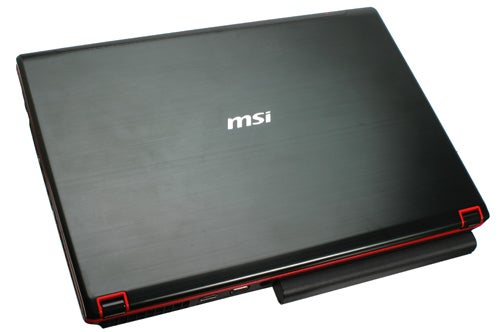 At first glance, it’s decent value. A powerful Intel Core i7 quad-core CPU, generous 640GB hard drive, Blu-ray drive and nVidia GeForce GTS 250M graphics are all provided for just over £1,300. MSI even throws in a decent rucksack and a 1,600dpi gaming mouse to add further to the value – more on which can be read about in our GT627 review.


MSI has also made some subtle changes to the exterior design. Gone is the ugly red hinge section of previous models, replaced with an all-black lid and red trim, ensuring a far more coherent, less distracting exterior. We also like the brushed metal finish, which is both stronger and less high maintenance than the glossy plastic lids found on so many laptops. 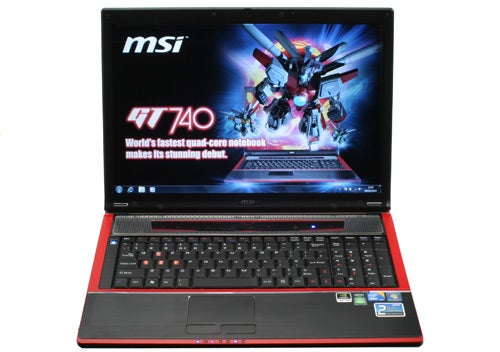 Unfortunately all this good work is undone when you open the laptop. MSI’s continued use of garish and cheap-looking bright red plastic really doesn’t help the machine’s look, especially when combined with the discordant blue backlighting for the power button and touch controls. There are some crumbs of comfort, such as the slim, non-reflective screen bezel and comfortable bushed metal palm-rest, but on the whole the GT740’s design is to be tolerated rather than admired.

This malaise is well illustrated by the touch controls that are housed in an unattractive bar above the keyboard. These buttons comprise the usual playback controls, as well as separate Bluetooth and Wi-Fi switches and a handy user-defined application-launch shortcut. There’s also a shortcut for launching the 2.0-megapixel webcam. Despite the ugly appearance, though, the blue-backlit controls are well spaced and responsive, with no annoying beeps to spoil the experience.


We’ve never been big fans of MSI’s keyboard layouts and the GT740 does nothing to alleviate this. Though it does include a full number pad the layout feels cramped, which is completely unnecessary as there’s plenty of free space either side of it. Our real complaint, however, is with the company’s persistence in having the ‘Fn’ key to the outside of ‘Ctrl’ – an anomaly that most manufacturers manage to avoid.

It’s even more of a shame as in terms of feedback the keyboard is superb. Each well-spaced key has just the right amount of travel with a nice, defined click, making both typing and gaming truly pleasurable experiences.

Just as it harks back to earlier times with its non-chiclet keyboard, MSI also seems to be stuck in the past with the touchpad, which doesn’t support multi-touch. Mind you, it’s hardly an essential feature, and at least the sensitive pad’s ergonomics match that of the keyboard. Its matte surface is very pleasant to the touch and its metal-etched buttons, though a tad stiff, feature a defined click. 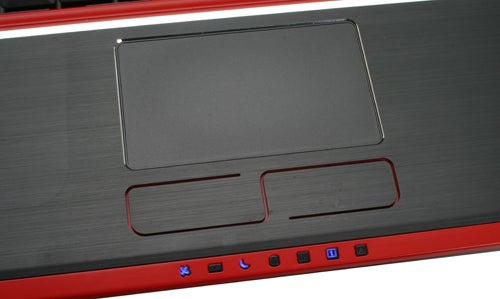 Connectivity is excellent. For internet and networking duties there’s a 56K modem (still essential for some few unfortunate souls) and Gigabit Ethernet, together with Wireless-N Wi-Fi and Bluetooth V2.1 plus EDR on the wireless side. Three ordinary USB 2.0 ports are supplemented by a dual USB/eSATA port. There’s even mini-FireWire for those that still use it.


At the back are both VGA and HDMI outputs for video, while no less than four 3.5mm audio jacks provide for 7.1 digital or analogue audio. Thankfully they’re now tastefully finished in black rather than the garish colours found on previous MSI gaming laptops. A memory card reader and 54mm ExpressCard slot complete the picture, while optical drive duties are handled by the aforementioned Blu-ray ROM and DVD+/-RW combo drive.

Despite the inclusion of this high definition sequel to DVD, however, you won’t be able to enjoy Blu-rays in Full HD (1080p) without an external monitor or TV, as the 17in screen sports a 1,680 x 1,050 (16:10 aspect) native resolution. Though considering the relatively weak graphics it’s a logical choice.


Whatever your opinion on the matter, overall the screen is a good one. There’s little to no sign of backlight bleed or banding, colour production is punchy and uniform and it’s very sharp. Black detail is also good, though at the cost of white purity. This compromise makes sense on a machine oriented towards films and gaming. Viewing angles are also surprisingly good, almost on a level with the Dell Studio XPS 16 and its RGB-LED backlit display. 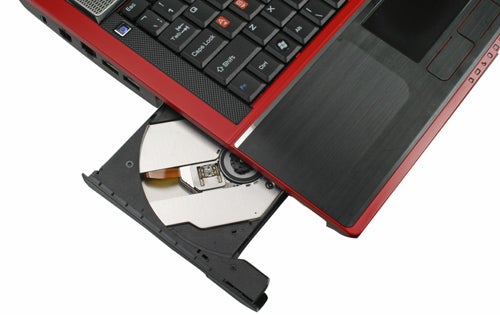 Though the GT740 has four speakers they don’t quite match up to its display’s performance, as they lack bass (despite a dedicated subwoofer) and distort slightly at their maximum volume. However, the speakers still create a relatively deep and wide soundstage if you stay below this maximum. You’ll get better quality using decent headphones or speakers, but they’re useable and occasionally impressive.

With a good display and ergonomic keyboard, the GT740 has the main external ingredients for a decent gaming machine, but how do its internals hold up? Like every other Core i7 laptop we’ve looked at, the GT740 has the relatively low-end 720QM, whose core clock speed is just 1.6GHz. However, depending on load and how many cores are in use, this CPU will turbo clock all the way up to 2.8GHz, so that default speed is somewhat misleading. In reality the 720QM won’t have the slightest trouble with any game currently on the market or available in the near future.


It’s backed up by the usual 4GB of DDR3 RAM, though unfortunately MSI is still supplying a 32-bit version of Windows 7 Home Premium that won’t take full advantage. On the other hand, hard drive provision is unusually generous with a single 640GB drive. We’re guessing this is a recent addition to this laptop, as MSI’s website still lists the maximum capacity on the GT740 line as 500GB. Unfortunately, though, this does mean the drive spins at 5,400rpm rather than the speedier 7,200rpm common to gaming laptop hard drives. 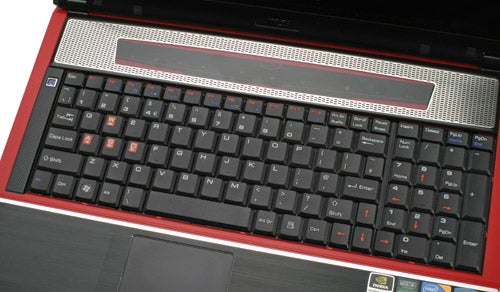 As ever, the single most important consideration on any gaming machine is its graphics card. Regrettably, in the minds of most manufacturers, sticking in a Core i7 CPU apparently excuses using a relatively low-end graphics card – the most popular choice being a 1GB nVidia GeForce GTS 250M, as also found in the Toshiba Qosmio X500-10T. 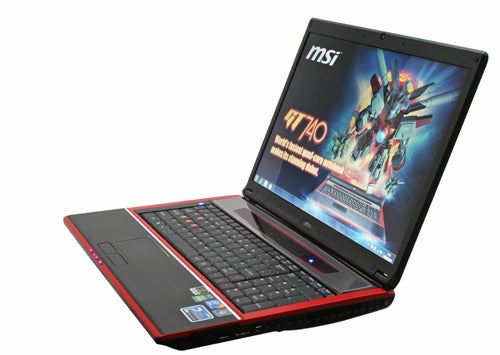 As we’ve seen several times before, the GTS 250M doesn’t really provide the out and out gaming performance one would like from a gaming laptop. This deficiency is reflected in the price, of course, but in some respects the GT740 is better classed as a multimedia laptop that you can play games on than a thoroughbred gaming machine.


This isn’t to say it’s incapable, though. Our entry-level gaming test, Trackmania Nations Forever, posed no particular hurdle, registering 117fps in our standard run-through. The more demanding S.T.A.L.K.E.R: Call of Pripyat benchmark, meanwhile, produced a reasonable 46.8fps average across its four tests. However, so we can compare results, these tests are run at a lower resolution than the native one of the GT740 and at only medium detail settings, highlighting the compromises required to play modern games. 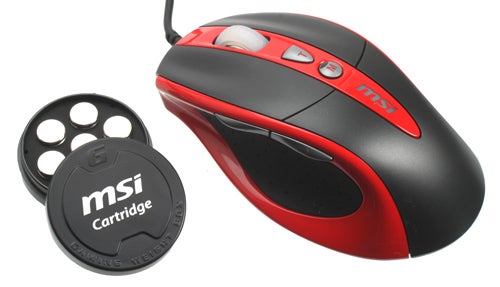 To reinforce this point we tested the GT740 using Crysis and it didn’t cope well. In DirectX10 on medium detail and at the native 1,680 x 1,050 resolution, for example, the GT740 only managed a barely playable 23.5fps – we needed to knock this down to 1,280 x 1,024 to get above 30fps. To put things in perspective, the Scan 3XS i3 OC PC, which cost close to half the price when we reviewed it in January, offered such frame rates at High Detail and with anti-aliasing enabled. If gaming is what you’re after, laptops still represent poor value for money.

If its gaming performance is merely okay, the GT740 springs a surprise with some excellent battery life results. In fact, it gives one of the best performances we’ve come across from a gaming laptop, lasting close to three hours in the Productivity segment of MobileMark 2007 thanks to its capacious 7,800mAh (85Watt-Hour), nine-cell battery. DVD playback with 100 per cent brightness was less impressive, but at an hour and a half still more than enough to watch most films. 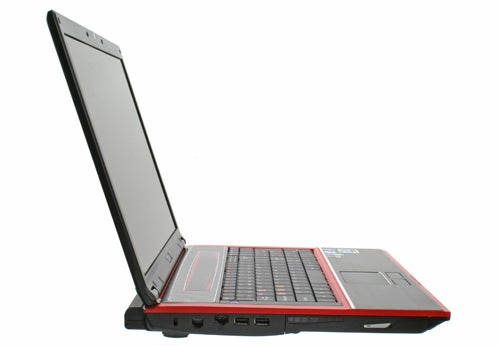 Ultimately, though, this isn’t the metric by which we judge a gaming laptop, and despite the extras (the rucksack and mouse) and a generous two year warranty, MSI can’t boast outstanding value, either. A new version of the Qosmio X500 we reviewed, the Qosmio X500-11M, is now on sale for £1,399 offering a comparable overall spec and a faster GTS 360M GPU. It might have a smaller hard drive and its screen probably won’t be as good, but if you can get past the overall glossy finish it will offer a Full HD resolution and an extra inch of viewable screen, a backlit keyboard with a superior layout and a multi-touch touchpad, not to mention the best laptop speakers around. 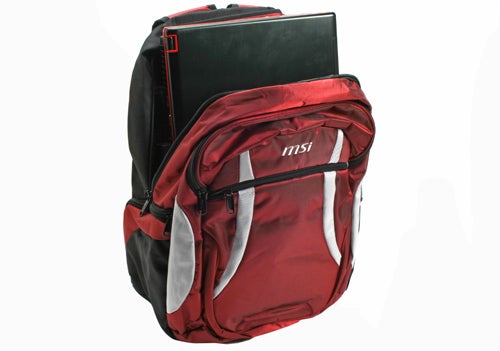 If you don’t mind a smaller display, there’s also the 15.6in Novatech X70 to consider. Its faster GTX 260 graphics card and Full HD screen only cost £50 more, though battery life, speakers and keyboard will be far inferior to either of the previous machines. 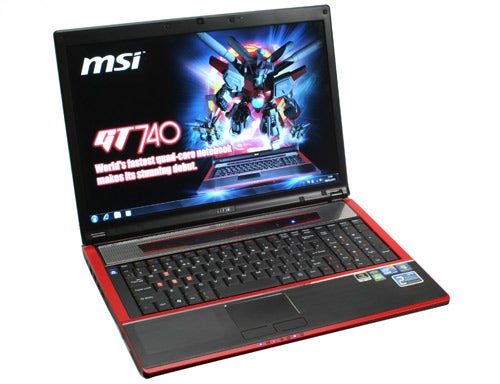 
While the MSI GT740-021UK offers decent value and an excellent screen combined with impressive battery life for a mobile gaming machine, it is let down by an awkward keyboard layout, underpowered graphics card and a 32-bit OS.