MSI is a big name in the gaming laptop market, with dozens of models available across several different ranges. Its latest machine, the GS60 6QE, is one of its slimmest model yet.

It’s also one of the first gaming laptops I’ve seen to include an Intel Skylake processor, packing in a current-generation Nvidia GPU and a lightning-fast Samsung NVMe SSD alongside.

This machine is packed with updated components, but the external design remains the same as existing GS60 notebooks. That means a largely black machine clad in a combination of brushed aluminium and plastic, with multicoloured lights, a SteelSeries keyboard and variety of glowing logos.

Related: The Best Laptops of the Year 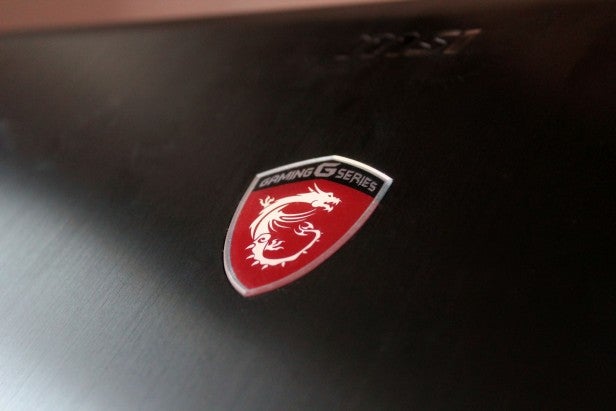 The GS60 6QE shares many aesthetic notes with other MSI laptops. The glowing power button sits in the middle, above the keyboard and speaker grille. The front edge is decorated by status lights, and the lid features an illuminated MSI Gaming Series logo. The keyboard also has extensive backlighting: by default, it’s set to glow in several different colours. For a final flourish, the wide trackpad is ringed with chrome.

Some may consider the MSI’s looks a little over the top, especially that multi-coloured keyboard – but this is easy enough to disable. Besides, the MSI is no less extravagant than the Alienware 15, which has illuminated vents around its matte-finish metal body.

This machine may look like many gaming notebooks, but it has an advantage over its rivals. This 15.6-inch system is only 20mm thick, which is nearly half that of the Alienware 15 and 7mm slimmer than the MSI GE62 2QD Apache.

The GS60 also weighs only 2kg. That, again, is excellent: the Alienware and MSI GE62 tip the scales at 3kg and 2.4kg respectively.

Despite the slim and light design, build quality is good. Push the relatively thin and flexible screen, and while there’s the expected level of movement, there’s no resultant distortion in the LCD panel. Meanwhile, the wrist-rest and base are both sturdy. There’s a tiny bit of give in the metal, but not enough to cause concern. 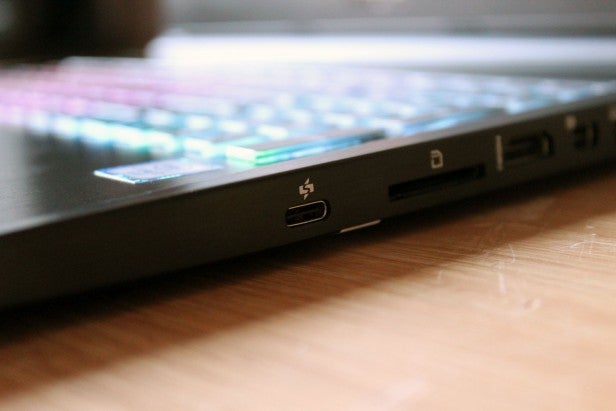 Those who are likely to want to perform an upgrade in the future will be pleased to learn that internal access is possible. The base eases away and, once that’s done, the hard disk, cooling gear and wireless chips are all accessible. The SSD and memory sticks can be changed too, but they’re trickier – they require the removal of the whole motherboard.

The most intriguing new component inside the GS60 is the Skylake processor, successor to the popular Broadwell chips seen in many last-generation products. It uses a 14nm manufacturing process but with a tweaked design, which further improves performance and reduces power consumption.

The Core i7-6700HQ is one of Intel’s most powerful mobile Skylake chips. It has four Hyper-Threaded cores, and the clock starts at 2.6GHz. Turbo Boost allows all four cores to run at up 3.1GHz, or one to accelerate to 3.5GHz, and there’s 6MB of L3 cache. Also loaded into this system is 8GB of memory.

The new processor is paired with more familiar graphics. The GTX 970M is a potent Nvidia part that sits towards the top of its current range, but it’s nearly a year old already. It’s based on the GM204 chip, which is also used in the desktop GTX 970 and GTX 980 cards, and it houses 1,280 stream processors running at 924MHz.

We’ve no concerns about the storage. Windows 10 is installed to a Samsung SM951 SSD. That uses the NVMe interface, which deploys PCI Express to offer far more bandwidth than a traditional SATA drive. It’s a 128GB drive with 117GB of formatted space, so there isn’t much room for games, but then you can offload all your other files onto the 1TB hard disk that’s also included.

On the inside there’s dual-band 802.11ac wireless and Gigabit Ethernet, both of which are made by Killer. These are supposed to prioritise network traffic for gaming, but are essentially a software solution and therefore have an impact on CPU usage, while offering minimal benefit for gamers.

Around the outside of the machine you’ll find a mini-DisplayPort, HDMI socket, an SD card reader and two USB 3.0 ports accompanied by a Type-C USB 3.1 connector. There’s no room for an optical drive. 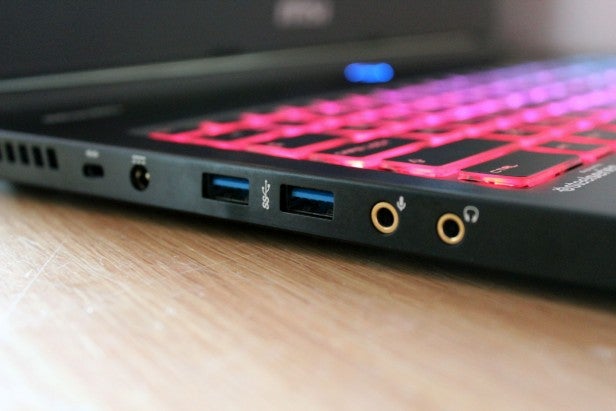 MSI has installed its familiar Dragon Gaming Center app. This tool has four modules: one to monitor temperature and fan speeds; another to open up gaming apps; a third to quickly boot games; and the last to switch between the GS60’s fan speed modes. Aside from the monitoring module, the Dragon app isn’t particularly useful – most of its functionality is easily replicated in Windows.

Elsewhere, there’s MSI’s Nahimic audio app and its System Control Manager, which is far too basic: there isn’t much it can do beyond changing the brightness of the screen and turning off networking options. There’s also a SteelSeries tool for changing the keyboard’s colours.

The GS60 range is stacked with different configuration options. The cheapest version is the GS60 2QC-017UK, which costs £1,060 and has a Broadwell-based Core i7 processor and more modest GTX 960M graphics.

The most expensive model is the 6QE-036UK, which costs £1,600 and makes several specification changes. It has 16GB of memory alongside a 256GB SSD, and its GTX 970M has 6GB of dedicated memory – twice as much as the GPU in our sample. It also has a 4K screen.