A system that allows you to a take a thin and light ultraportable laptop and plug it into some sort of desktop dock that contains a powerful graphics card has long been the holy grail of mobile computing. Plenty of companies have tried their hand at a solution, but they’ve either never made it to market or been too expensive and rare to get any traction. The latest company to give it a try is MSI, with its GS30 Shadow and GamingDock combination.

Unlike most previous systems the GamingDock uses a classic laptop dock system with connections on the underside of the laptop, rather than a cable. This allows MSI to use a connection that can deliver a full 16 PCI-E lanes, meaning it can take full advantage of the power of the Nvidia GeForce GTX 980 that sits in the dock. 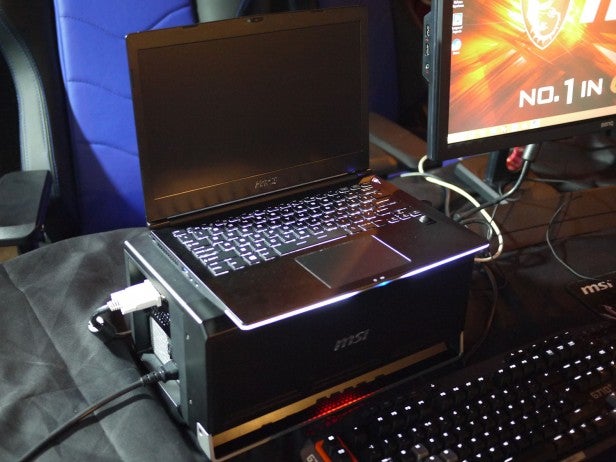 The GS30 Shadow laptop is a relatively slim and light 13-inch machine that could easily be carried around every day. It’s a little heavier and thicker than the latest ultrabooks but it’s still well within the range of being comfortable. Comparing to something like the Dell XPS 13 2015, the GS30 Shadow has dimensions of 320 x 227 x 19.8mm and weighs 1.2kg, while the Dell measures 304 x 200 x 9-15mm and weighs 1.18kg.

It’s similar story with the styling. It’s a nice enough looking machine, with clean simple lines and a muted matt black finish, while a bit of flair comes in the form of a strip of white light that runs along the front edge. Ultimately, though, it’s clearly not a truly premium, slim line laptop of the Macbook Air mould – you certainly won’t be embarrassed by it by neither will it make others envious. 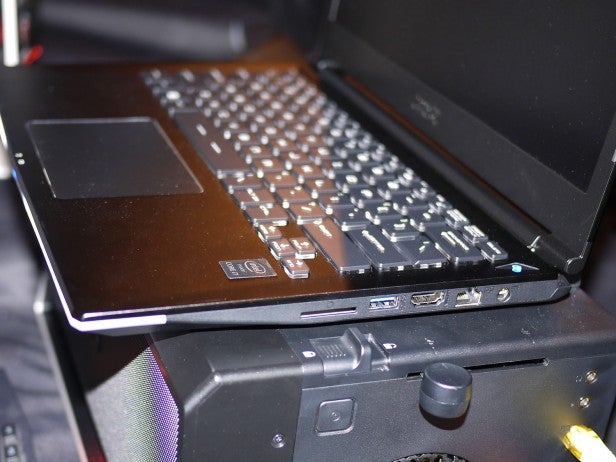 Where the GS30 Shadow lacks for very little is in its feature list. This is a very capable and well equipped laptop that should easily cope with most everyday tasks, and even some light gaming.

The heart of this specification is an Intel Core i7-4870HQ processor with Iris Pro Graphics 5200, which is about the most potent CPU/GPU combination you can get for a laptop. The CPU is quad-core with hyperthreading (so appears as eight-core) and runs up to a whopping 3.7GHz, while the Iris Pro Graphics 5200 is the uprated solution that uses onboard eDRAM for impressive graphics performance, something which has traditionally been a weak point of Intel CPUs. 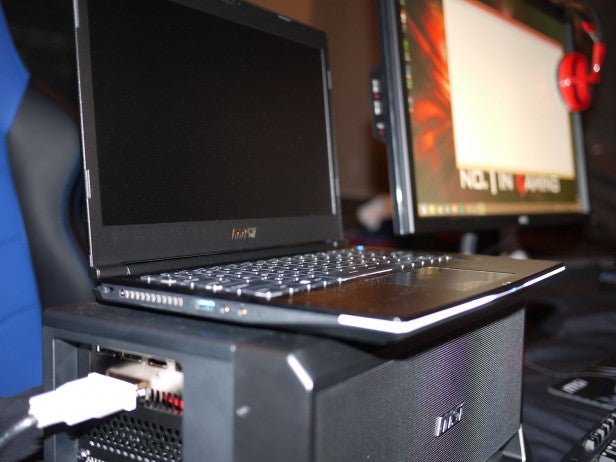 The one downside of this choice of chip is that it will churn through battery power much quicker than a more modest solution. This could severely hamper the overall appeal of the laptop-plus-dock solution, as a key factor is that the laptop on its own is a truly practical, portable everyday option. We’ll have to wait until we do a full review to find out exactly how the GS30 Shadow holds up.

Otherwise, it’s all good. There’s up to 32GB of RAM, both a hard drive slot and room for two m.2 SSDs, which can be run in a RAID configuration. Connectivity is also excellent, even without the dock. There’s two USB 3.0, an SD card reader, full size HDMI, Ethernet and both headphone and microphone sockets.

The 13.3-inch screen is also well specced, with a 1080p resolution, IPS panel technology and non-reflective coating. It didn’t appear to be the finest screen we’d ever seen upon first viewing, but it should certainly be more than capable.

The keyboard and trackpad were also impressive. The former has a well-defined action, making it easy to tell if you’ve pressed a key or not. It also has a good layout and is backlit, too. The trackpad, meanwhile, is nice and large and responded well in our brief test. 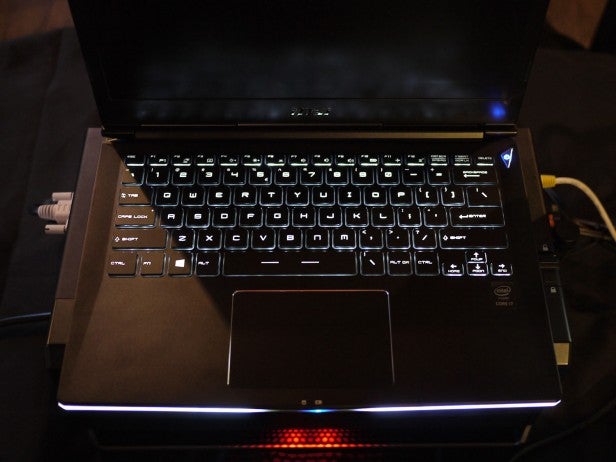 Decent as the GS30 Shadow is on its own, its true appeal is of course when combined with its dock. This is a chunky thing that the laptop sits on top of, and as such it makes the most of the bulk to incorporate a host of other features.

Speakers are the main addition, with two speakers flanking a central sub woofer, each of which is rated at 5W. There’s also space for an extra 3.5-inch hard drive and there’s some extra connectivity too, with Killer Gb Ethernet, mic and headphone sockets, plus four USB 3.0 ports. 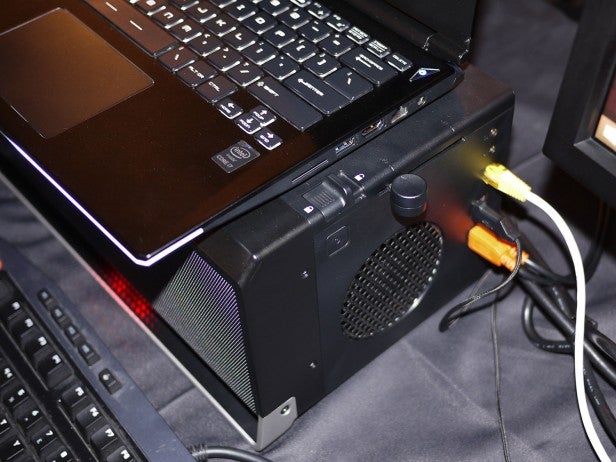 The star of the show, though, is the Nvidia GeForce GTX 980 graphics card. This is among the fastest graphics cards you can currently get and is ample to make just about any game run at maximum settings at the 1080p resolution of the laptop’s screen. Not that you’ll be using the laptop’s screen, as the system is meant to be hooked up to an external monitor.

The card is a standard form factor, so houses the usual selection of outputs, with one DVI, an HDMI and three DisplayPorts. Theoretically you can also replace the graphics card with another one, but for now MSI is only offering the GS30 Shadow with the GTX 980.

The one other competitor that’s making a laptop dock solution at the moment is Alienware, with its Alienware Graphics Amplifier, but crucially it only uses a PCI-E x4 connection, which limits the bandwidth available between the graphics card and laptop. This impacts its maximum performance. It also doesn’t have the speakers, the hard drive space and quite such good connectivity, though it sure does look nicer. It’s also available without a graphics card, allowing you to choose your own. The GamingDock will be available without a graphics card in the US but will only be sold as a complete bundle with a GTX 980 in the UK.

As expected, the combined laptop and dock absolutely monstered through all the demos we saw, so the power is definitely there. What remains to be seen is just how reliable a solution it is in everyday use. 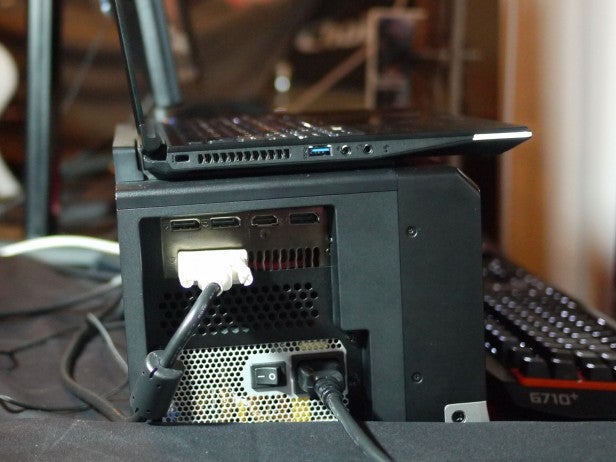 We’re really happy to see another attempt at creating a graphics card dock and laptop solution, and MSI seems to have made a decent attempt with the GS30 Shadow and GamingDock. We’re not really sold on the inclusion of speakers or the styling of the dock, but functionally it’s spot-on. We just wish MSI was selling it without the GTX 980 here in the UK so that users had more options than to pay £2199 for the full kit.