The MSI didn’t have a problem playing any test titles, but benchmarks indicate just how far this machine is behind the GTX 1060 inside the Asus – and the full-fat version of the GTX 1050 Ti.

The MSI’s Dirt Rally score of 61fps is fine, for instance, but the Asus ROG Strix GL702VM was eight frames better – and the MSI’s 53fps score in Shadow of Mordor was twenty-one frames behind the Asus. The Dell Inspiron 15 Gaming, meanwhile, has the GTX 1050 Ti with 4GB of memory, and it scored 59fps in Shadow of Mordor.

The MSI ran tougher games with mixed results. Its GTA V average of 56fps is playable, but it’s still almost 20fps behind the Asus – and its minimum framerate barely made it above 30fps. The MSI recorded a just-playable 30fps in Deus Ex: Mankind Divided, but its minimum framerate of 15fps indicates that the game will struggle in more intensive moments. 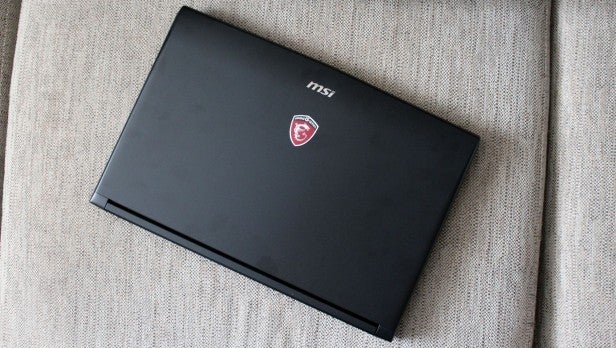 The MSI showed weakness in 3D Mark tests, too. Its score of 6808 in the standard benchmark is nearly 2000 points behind the Asus, and its Ultra result of 1416 is 400 points behind machines with the GTX 1050 Ti and 4GB of video memory.

The MSI isn’t slow, and it’ll play most current games at medium or high quality levels, but tough games will still prove problematic in busier moments. The Asus and other GTX 1050 Ti laptops are faster right now, and the miniscule memory allocation doesn’t bode well for the future either. Most modern games exceed 2GB of video memory when given the opportunity, so this problem will only get worse in the future.

The new Core i7 processor helped the MSI deliver better application benchmarks. In the Geekbench 4 test its single-and multi-core scores of 4689 and 13,881 are the best we’ve seen from a mid-range gaming laptop, and its results of 4020 and 14,539 in Geekbench 3 were able to easily outpace the Asus – that machine could only manage 3036 and 9,271 in the same tests.

The Kingston SSD delivered read and write speeds of 538MB/s and 332MB/s – not far away from the Asus, but behind NVMe SSDs. That’s a middling and entirely expected result, and it means that game and laptop loading times will be decent.

The Core i7 processor ensures that the MSI delivers some of the best application scores I’ve seen from this level of gaming laptop, but that’s not what this machine is designed to do – and in many cases it’s going to be overkill. Few games need this CPU’s multi-threaded capabilities; it’s really only video and photo rendering that’ll benefit from this increased grunt.

At least the MSI’s chunky 17.3-inch frame keeps the components cool. The default Sport mode kept the graphics card at a comfortable 66°C without throttling performance – it averaged beyond 1700MHz during a stress-test. The noise was low throughout, and the exterior barely warmed up.

This impressive performance continued to comfort mode, where the GPU was clocked to around 1570MHz with no real impact on noise and temperature. The eco mode is the MSI’s third option, and it saw the CPU reigned in to around 1.4GHz and the GPU running at its stock speed of 1493MHz.

The laptop remained cool and quiet, and this restricted mode didn’t have a huge impact on games performance – the machine’s original Dirt Rally result of 61fps declined to a still-playable 54fps. That said, I wouldn’t run tough games using eco mode. 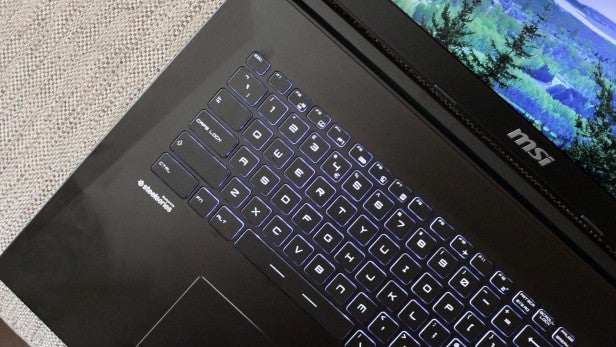 The MSI’s poorest thermal results came in the processor tests. The chip reached a top temperature of 93°C – a few degrees higher than the Asus, and a little too hot for my tastes. That said, those results were recorded in a stress-test, and the MSI never became unstable. It also ran at a consistent 3.3GHz.

The 1080p resolution and 17.3-inch size means that while this screen isn’t stunningly sharp, it’s more than good enough.

The matte panel uses TN technology, which means it’s likely to serve up great response times and brightness levels alongside poorer viewing angles and colour quality. We didn’t notice any ghosting when gaming on this panel, and we’ve no complaints about the backlight – the MSI served up a 299 nits brightness level and a solid contrast ratio of 996:1. That’s slightly better than the Asus thanks to a marginally deeper black level.

Get beyond the contrast ratio, though, and the MSI disappoints. Its colour temperature of 8,298K is cool, and causes a pallid blue pall over the entire panel – and its average Delta E of 7.31 (closer to zero is better) is wayward. This machine can render over 90% of the sRGB colour gamut, but none of those shades look rich or inviting.

The pale panel suffered elsewhere, too. Its top edge lost a middling 14% of its backlight strength and a massive 17% of the backlight vanished across the middle of the screen, and the gaming and movie modes made little difference to this screen’s poor performance.

The MSI’s panel isn’t awful, but it’s pale and lifeless – and so hardly ideal for showing off games and movies. The Asus was better, with an improved Delta E, superior colour temperature and a more uniform backlight. It’s also got G-Sync, which my MSI sample doesn’t have. 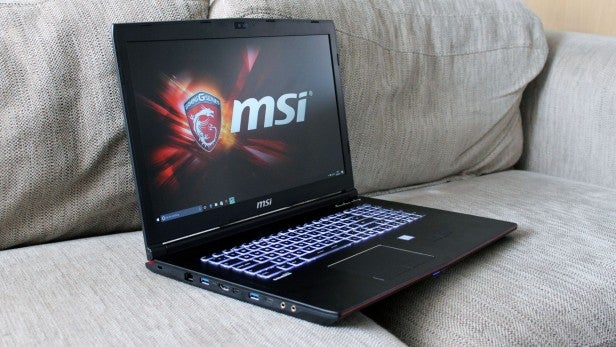 The audio kit is similarly underwhelming. The pair of 2-Watt speakers deliver crisp, clear vocals and other mid-range sounds, but that’s about it. The top-end is weak, and the bass is poor because there’s no subwoofer.

Music mode is chosen by default, and it’s the best option, with good balance and clear sounds. The Movie mode is muddy, and the gaming modes are a little underwhelming – weak treble in the Shooting option, for instance, and quiet, weedy output from the Strategy and RPG profiles.

The Music option may be the best choice, but the absence of a subwoofer leaves every option sounding a little underwhelming and weak. The Asus suffered similarly, so I found myself reaching for a headset in both cases.

Used as our main laptop for the review period
Tested for at least a week
Used consistent benchmarks for fair comparisons with other laptops
Reviewed using respected industry benchmarks and real world use
Previous
MSI GP72 7RE Leopard Pro Review Next
Keyboard, Trackpad, Battery and Verdict Review