The MSI GF63 doesn’t have the wow factor of some competing gaming notebooks we’ve seen at Computex 2018. It’s not marketing itself as the first gaming notebook to use an Intel Core i7+ CPU, like the Gigabyte Sabre – even though it has one as an option – and it doesn’t feature the slathering of RGB lighting seen on the Asus ROG Strix Scar 2.

Instead it unashamedly focuses on offering the best possible hardware and gaming experience possible for less than £1000. The end result, from what I’ve seen, is a workhorse machine with the potential to be one of the best affordable gaming notebooks released this year.

The laptop doesn’t currently have a confirmed UK release date, although an MSI rep told me it will launch there in the very near future. 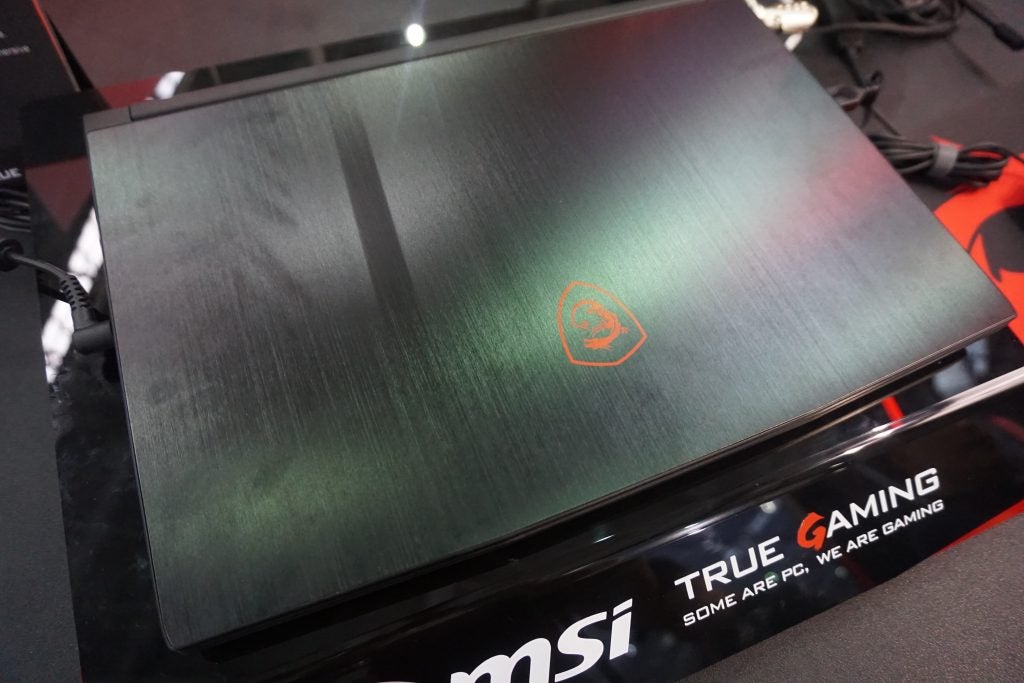 The GF63 borrows a number of design features from its more expensive sibling, the MSI GS65 Stealth Thin, which in my mind is no bad thing. Unlike its Gigabyte and Asus rivals, the laptop is completely free of RGB lighting. The only flourishes you’ll find are a red backlight on its keyboard and an MSI logo on its lid.

The chassis itself also feels significantly more premium than the Gigabyte Sabre. The top lid and keyboard cover are both made of brushed aluminum. The end result makes the laptop feel significantly more sturdy than competing sub-£1500 gaming notebooks I’ve tested in the past.

The metal cover also felt well-built and offered zero flex during my test session, even when met with heavy typing. The pleasant typing and gaming experiences were aided by the fact the company has used a SteelSeries keyboard. Some gamers will bemoan the fact the keyboard doesn’t have full RGB lighting, but for me the use of more robust SteelSeries switches is a bigger deal and a key selling point, differentiating the MSI GF63. 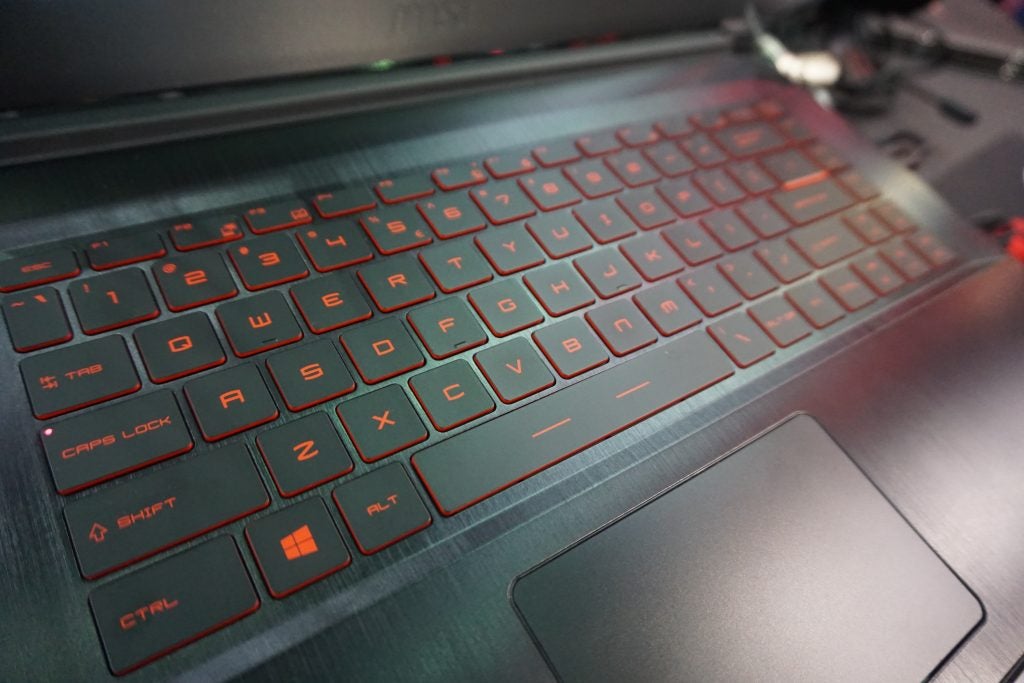 Too many of the cheaper gaming notebooks I test have terrible chiclet keyboards, with unreactive membrane switches that aren’t fit for purpose. The MSI GF63’s felt great for gaming, with each key having a wonderfully snappy return mechanism and reactive click upon actuation.

The laptop’s super-slim bezel aids its premium feel. MSI has managed to reduce the laptop’s screen-to-body ratio down to 82% and load a 15.6-inch IPS, 1080p screen into a 14-inch frame. It has a tiny 4.9mm bezel as a result. The only other gaming notebook I’ve seen do this for less that £2000 at Computex is the ROG Strix Scar 2, which costs significantly more.

During my hands-on, the screen looked great, offering rich colours and being suitably sharp for 1080p gaming. My only concern is that the MSI rep on hand couldn’t confirm the display’s refresh rate. Most of the other affordable laptops I’ve seen at Computex this year use 120Hz-and-above refresh rate screens. Hopefully MSI has done the same with the GF63. If not, this could be a key sticking point for gamers, where high refresh rates are key.

The laptop’s bottom is the only other area that reveals the MSI GF63’s true, affordable nature. Unlike the rest of the laptop it’s built from a mix of metal and plastic. 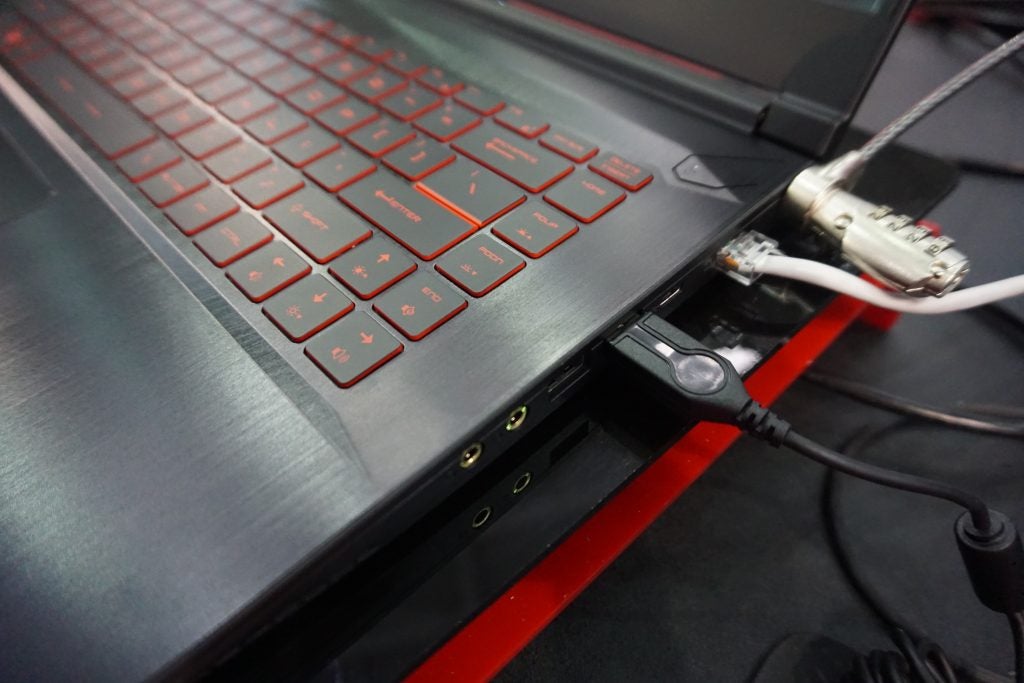 MSI hasn’t revealed all of the GF63’s specifications, but from what I’ve seen, it’s squarely aimed at eSports and 1080p gamers.

Both of the configurations MSI has revealed use Intel 8th Gen Core i7-H series CPUs. You’ll then get a choice of Nvidia GTX 1050 and GTX 1050 Ti graphics – the same options available on the Gigabyte Sabre. MSI hasn’t revealed what memory options the GF63 will have, listing a nebulous “up to DDR4 2666Mhz” on its site. The model I tested had 8GB RAM, however.

The company also hasn’t given a full list of storage options. A rep on hand told me you’ll be able to get between 128-512GB of SSD space and 1TB of HDD storage, which will support Intel’s Optane tech. The tech aims to let HDDs offer SSD-like performance when running certain tasks, like booting games.

You can see a full list of the MSI GF63’s known spec options in the table below. 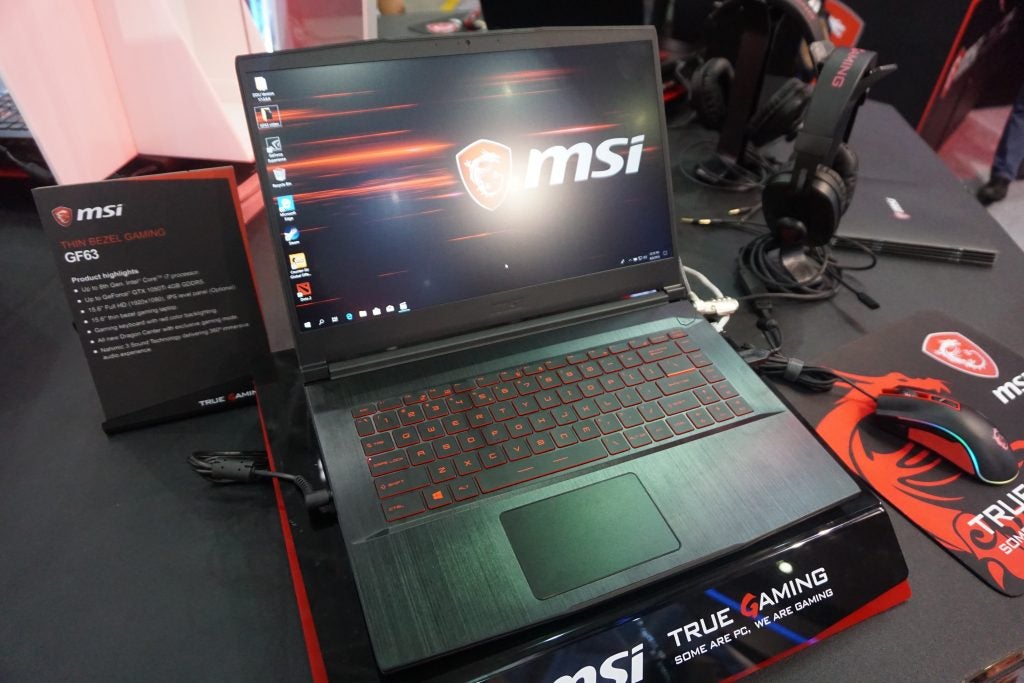 It may not have the wow factor of many competing notebooks to arrive at Computex 2018, but by focusing on the fundamentals, MSI has managed to create one of the most impressive-looking affordable gaming laptops I’ve seen in quite some time.

Featuring a premium-feeling metal body, top notch SteelSeries keyboard and solid hardware for 1080p, eSports gaming, the GF63 has a lot of potential. My only concern is that MSI hasn’t confirmed its memory options and the screen’s refresh rate.