Gaming laptop manufacturers have been striving to cram more power inside ever slimmer, lighter enclosures, so it’s something of a refreshing change to see a traditional 17.3-inch machine. The MSI GE72 offers a sensible design at a surprisingly low price.

The £999 price hasn’t stopped MSI from filling the GE72’s capacious innards with decent components. There’s an Nvidia GeForce GTX 965M graphics chip, a Core i7 processor, an SSD and a 1TB hard disk – as well as a SteelSeries keyboard.

The MSI’s exterior is adorned in a dark brushed metal. The lid is home to the MSI Gaming Series notebook logo, which sits between a pair of dramatic indents, and finished with red accents. The large trackpad is ringed with chrome-effect metal, and the keyboard has a backlight offering customisation in the form of colours and patterns. It’s unmistakenly a gaming notebook.

It looks good, but visually it can’t match the beefy Asus G751JL, with its brushed aluminium exterior featuring striking angles and red vents for only £100 more than the MSI. 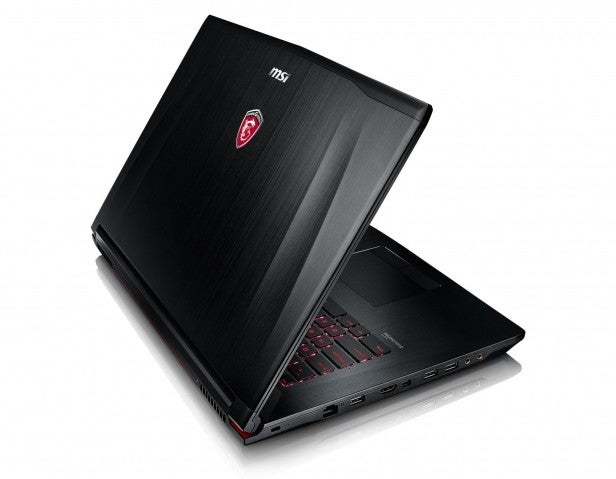 MSI fights back by undercutting its rival’s dimensions. The MSI’s 2.4kg body easily beats the 3.8kg Asus, and the GE72 is only 27mm thick – far better than the 43mm Asus. The GE72’s desktop footprint also compares well to the Asus: it’s 280mm deep, as opposed to the 318mm of the G751JL.

You’ll need a good-sized bag in which to lug around the GE72, but at least it’s much smaller than the Asus.

The MSI isn’t as sturdy as the Asus, however. The right-hand wrist-rest has an alarming amount of movement and the underside displays a little flex. It isn’y easy to get inside either – I removed almost 20 screws before being able to get the base panel to budge. Note, too, that one of those screws is beneath the warranty sticker, so you’ll void that if you go inside.

One memory slot and two M.2 sockets are free, and most of the major components are accessible. It’s better than the Asus, which hid several of its chips away.

The Nvidia GeForce GTX 960M is an impressive mobile graphics core. It has 2GB of dedicated memory, 640 stream processors and a rapid stock speed of 1,096MHz, which is the fastest of any GTX 900M-series card. That’s no surprise, since it’s based on the GM107 core that first appeared in the GTX 750 Ti, which is the first time I’d seen the Maxwell architecture in the wild.

The Core i7-4720HQ processor has four cores and a Turbo peak of 3.6GHz, and it’s paired with 8GB of DDR3 memory. Storage comes from a 128GB SSD and a 1TB hard disk, which should provide a good balance of speed and size. 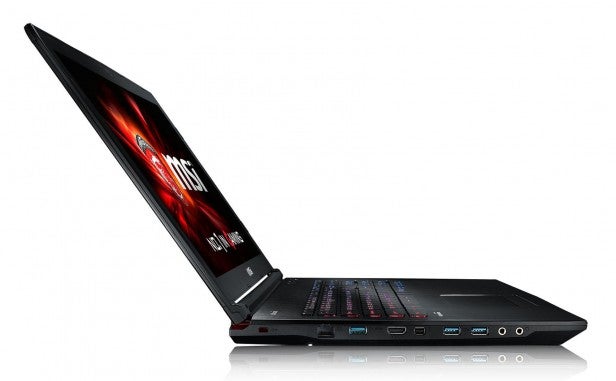 You’re out of luck if you want to change the components. MSI manufactures GE72 models with Nvidia GTX 965M and GTX 970M graphics cores, but they’re not available in the UK. If you’re after a system with more power then the 15.6in GE62 is the best MSI-made option.

The GE72 has dual-band 802.11ac wireless, Gigabit Ethernet, and HDMI and DisplayPort outputs, which is decent connectivity. In other areas, however, it falls behind the Asus. It has a DVD writer where the Asus includes Blu-ray, and its trio of USB 3.0 ports and single USB 2.0 connection can’t compete with the four USB 3.0 sockets and single Thunderbolt port included in the G751JL.

Elsewhere, it’s the usual mish-mash of useful apps and bloatware. I’ve no problem with Evernote and Skype, but am less keen on WildTangent games, a cooking tool and a Norton security suite.

The GE72 comes with a three-year warranty, which is generous; a year of coverage is usually the norm on a system like this.