The MSI GE66 Raider looks set to receive a mixed reception. While it offers a brilliantly accurate display and a strong performance, all of that is overshadowed by overwhelming fan noise. Pricing is competitive with rival machines on the market, so key differences such as unique lighting setup and a middling keyboard could sway you either way.

MSI has been a reliable competitor in the gaming laptop space for some time now and it’s looking to pick up its game with the MSI GE66 Raider.

Offering a complete shake-up on its predecessor, the GE65, changes to the MSI GE66 Raider go beyond a tweak or two; this laptop almost looks like it’s from a different range.

Many of the most obvious upgrades are by way of modifications to the design. However, while important, it’s the internals and their performance that will really dictate whether it’s make or break for the MSI Raider GE66.

Note that this is a hands-on with a pre-production model of the MSI Raider GE66, where we offer our initial impressions. This exact model won’t be available in the UK, but we’ll be sure to point out differences along the way.

MSI GE66 Raider price – How much will it cost?

The RTX 2060 model we have for the hands-on review will not be availalbe to buy in the UK.

MSI GE66 Raider release date – When will it come out?

We don’t yet have full confirmation of a UK release date for the MSI GE66 Raider. MSI has suggested a mid-to-late June release dat, but this might be affected by the ongoing global supply chain issues.

It’s quite remarkable how much the GE66 design differs from the GE65. The keyboard no longer spans the width of the base and the sides and back are much smoother. Angular and garish accents are notable by their absence.

In terms of weight and thickness, at 2.38kg and 23.4mm respectively, the MSI GE66 Raider sits well beneath the behemoths of top-end gaming laptops but it also isn’t a patch on super-slim models such as the Razer Blade 15 2020. 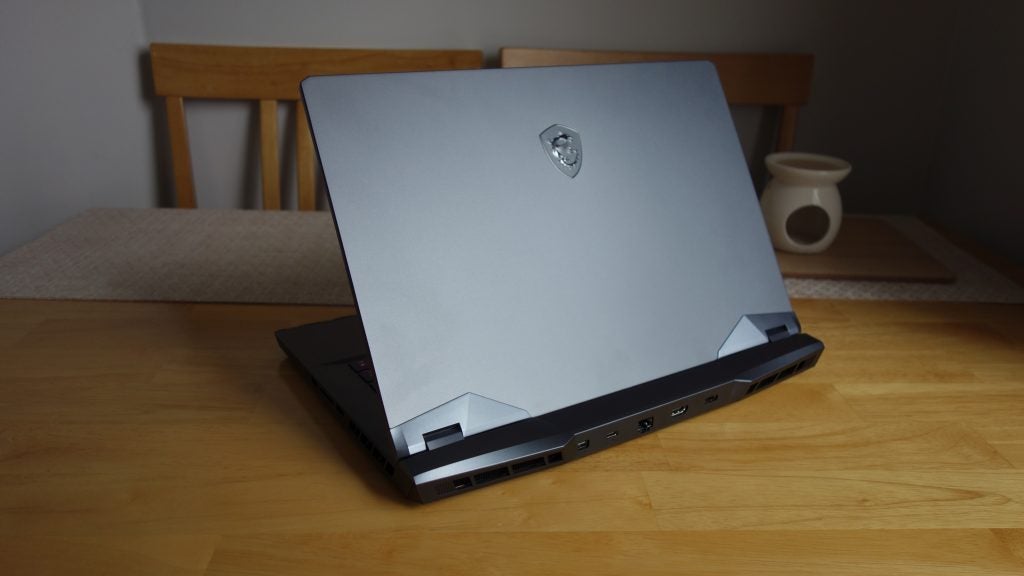 This is a gaming laptop that you’ll easily be able to cart around the house, or even take over to a friend’s house – but don’t expect to be carrying it around in a bag on a day-to-day basis.

Overall, I’d say the design is mostly a restrained one – with a single colour across the body’s entirety, aiming for a sleek and premium feel. However, the latter is hampered somewhat in two areas.

The underside of the laptop features plenty of ventilation, but result is this part of the machine feelsing far more plastic-y than the rest. The second is the inclusion of the new “Mystic Light” at the front of the device, which in my opinion is a bit much. 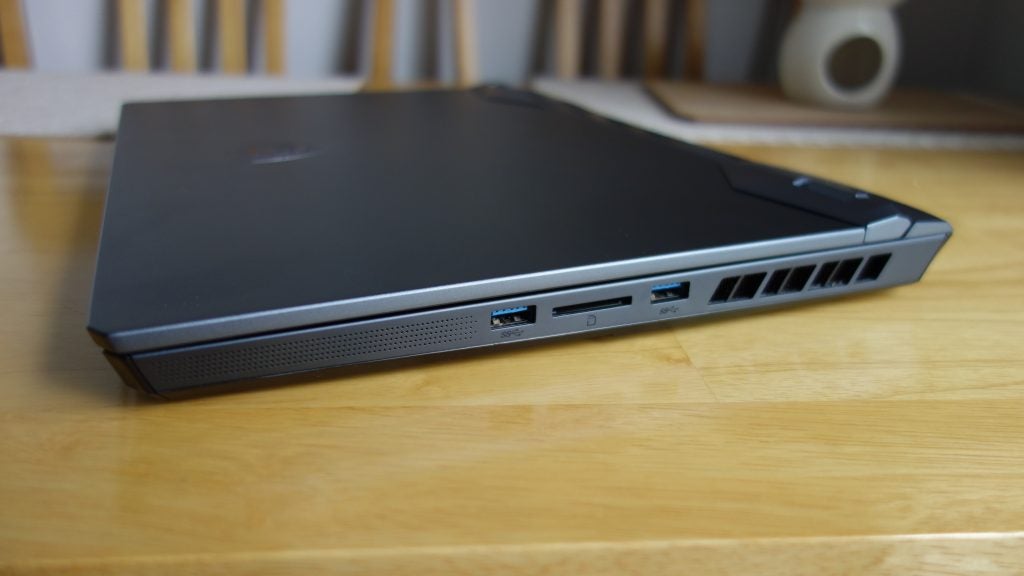 The lightbar will cycle through colours for a rainbow effect at default, but can dig into the settings and make the light bar a static colour or even turn it off completely. Still, I’m just not sure it’s worth including. RGB fans may disagree though, and it is appropriately bright and works as intended.

For ports, the MSI GE66 Raider comes with almost everything you could possibly ask for: three USB-A, two USB-C, an HDMI 2.0, a mini-DisplayPort, a headphone jack, an Ethernet port and an SD card reader.

The MSI GE66 Raider keyboard is a decent performer. It’s nice to type on in general use and offers perfectly fine gaming performance. Unfortunately, “perfectly fine” might not be enough for some.

Clickiness is only middling and feedback – although far from poor – is unlikely to satisfy gamers who prefer a more clunky mechanical style. Keyboard fanatics may want to look elsewhere, but if you’re happy with middle of the road then the GE66 Raider keyboard is a decent choice. 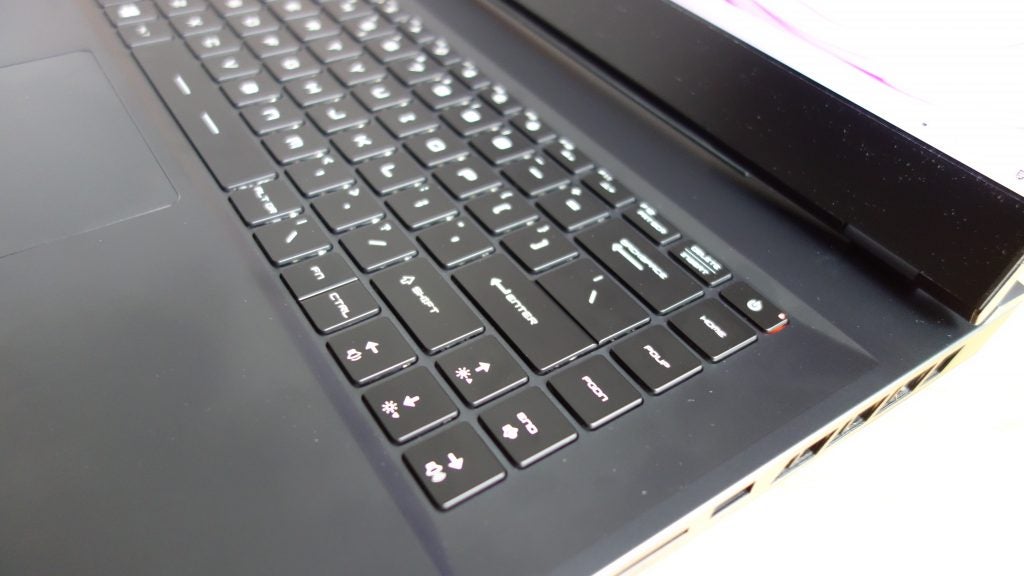 Backlighting for the keys is pleasing too. There are plenty of effects you can engage and it’s nice when used in tandem with the large light across the front of the device.

While the trackpad is perfectly fine for normal use, as with most gaming laptops, you’ll probably want to use an external mouse for any serious gaming sessions.

The crown jewel of the MSI Raider GE66 is its display; it’s an absolutely stunning 300Hz, 1080p panel. From gaming (its primary reason) to watching videos, the panel we tested makes 1080p look well enough what you’ll likely have expected.

Note that all the UK models will include a 240Hz display rather than the 300Hz version of our factory model, so expect some differing performance to our impressions in this hands-on. 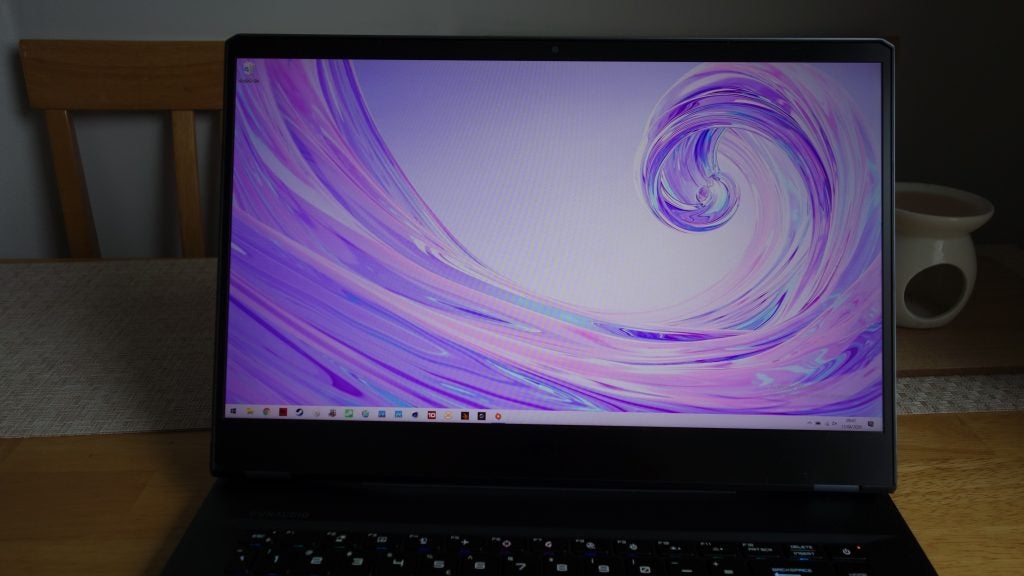 Along with the sheer impressive specs and initial impressions, our display testing brought up some interesting stats. When it comes to brightness, contrast and colour accuracy, the Raider GE66 is one of the best gaming laptops we’ve tested – making it perfect not only for gaming but also suitable for some creative work.

We can’t give our full impressions on the performance of the GE66 Raider or publish benchmark results just yet, with our hands-on model being only a pre-production unit. In particular, our machine comes sporting an Nvidia GeForce RTX 2060 – a model that won’t be available in the UK. UK versions will start with an RTX 2070.

However, we can comment on whether the GE66 Raider performed according to expectations and experience given this model’s specs. And, what we can tell you is that the MSI GE66 Raider seems capable of performing above expectations.

Comparing the performance of this model to some RTX 2070 laptops we’ve tested in the past, the GE66 Raider is super-competitive – bear in mind the MSI comes equipped with the new Intel 10th Gen H-Series chip to help it on its way. If this trend plays out in the higher-specced GPU versions of this machine, it could definitely be one to watch.

Regarding that new H-Series CPU, our initial testing of Intel’s latest was almost as impressive. The Raider GE66’s i7-10750H competed with some of the best laptop CPUs on the market and managed to get in a similar ballpark to the AMD Ryzen 9 4900HS – even if it did ultimately fall well short for multi-core performance. 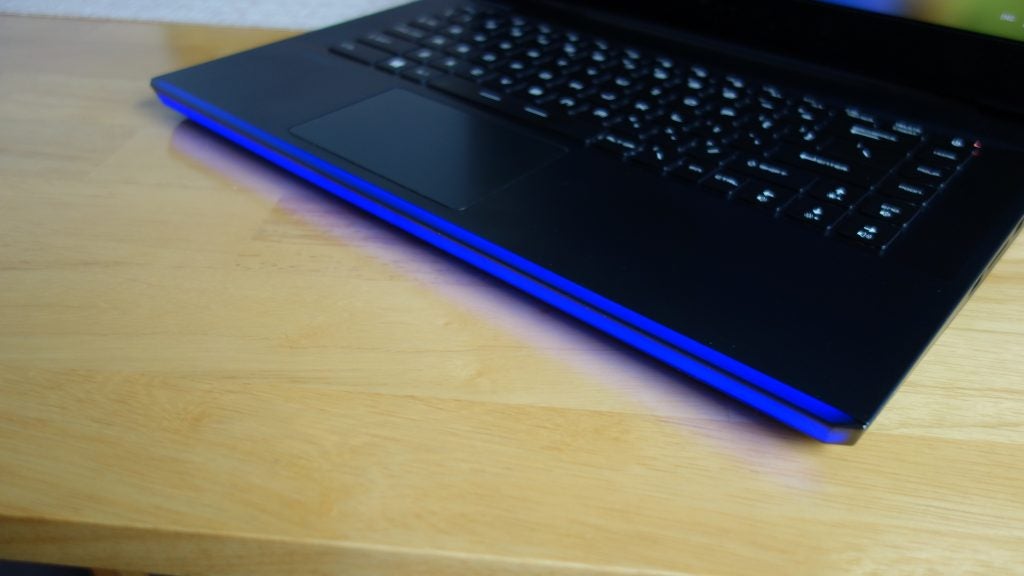 Unfortunately, there were a couple of causes for concern regarding the MSI GE66 Raider’s performance, the standout worry being the fans.

The fans get super-loud, which is a concern given that the unit here has a lower-spec GPU to the one eventual UK models will include. Even when playing less intensive games on low settings, the fans would howl.

In addition, the keyboard includes a function key for adjusting the fans – but pressing this merely increased the fan speed. It was so loud, in fact, that I’d consider it a deal-breaker; headphones or not, this will likely annoy you.

Although not a deal-breaker, the speakers on the GE66 Raider are really quite poor. You won’t want to use this machine for listening to music; even watching videos wasn’t a great experience so you can consider gaming out of the question. Obviously, headphones or external speakers provide an easy fix, but it’s something to bear in mind.

Whether its for Ultrabooks with 4K displays or high-performing gaming laptops, strong battery life remains the holy grail. However, it isn’t something that MSI appears to have achieved with the MSI GE66 Raider.

The GE66 Raider proudly touts a 99.9Wh unit, but this didn’t lead to a battery life that steps beyond the offering of  the majority of gaming machines. We’ll be sure to provide more specific numbers once we’ve run battery life benchmarking on the final model.

Nevertheless, the GE66 Raider doesn’t warrant being called out for substantially poor battery life since it matches many similar gaming laptops. There’s also a chance the final units will see improved stamina, so we’ve got our fingers crossed. 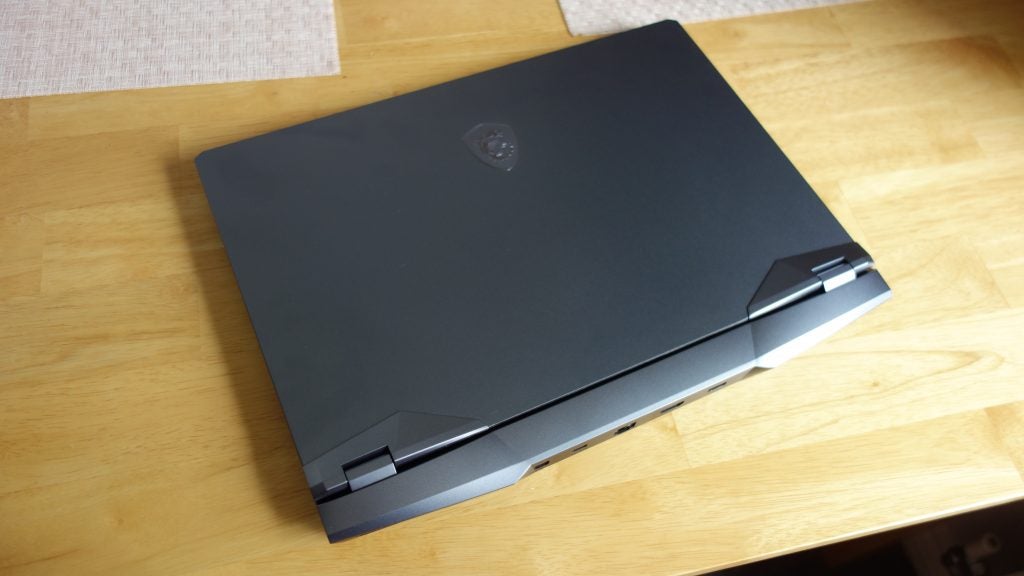 Since we’ve only tested a pre-production model of the MSI GE66 Raider we’re unable to deliver a final verdict. The likes of performance and battery could be improved for the retail models, so we’re taking everything with a pinch of salt.

However, from initial impressions we reckon the MSI GE66 Raider looks set to receive a mixed reception. While it offers a brilliantly accurate display and a strong performance, all of that is overshadowed by overwhelming fan noise. Pricing is competitive with rival machines on the market, so key differences such as unique lighting setup and a middling keyboard could sway you either way.

Keep an eye on Trusted Reviews in the coming weeks for our final review and verdict of the MSI GE66 Raider.