MSI’s machine offers huge power for work and play – it’ll handle virtually any productivity app and gaming situation. The 240Hz screen is stunning for esports, and the MSI has a good keyboard and versatile connectivity. It’s heavy and not particularly attractive, though, and forthcoming chips will offer more pace. It’s only ideal if you need loads of power or a 240Hz screen immediately.

The MSI GE65 Raider is a beast of a laptop – a heavyweight contender that serves up huge internal power alongside a lightning-quick 240Hz display.

This 15.6in machine has enormous power, but it also has a huge price. It costs £2,500 in the UK and similar mounts in the US.

It faces stiff competition too, with new CPUs and GPUs from Intel, AMD and Nvidia on the way, raising the questions whether you should look at new machines or still consider older models.

The MSI GE65 Raider is a traditional gaming laptop – it’s bright and chunky. There are metal slashes on the lid, bold air vents at the rear, and RGB LEDs in the keyboard.

The MSI’s old-school design is paired with good features. There are three full-size USB 3.2 ports, a USB Type-C connection, a card reader, HDMI and mini-DisplayPort connections and two audio jacks. The only thing missing is Thunderbolt. 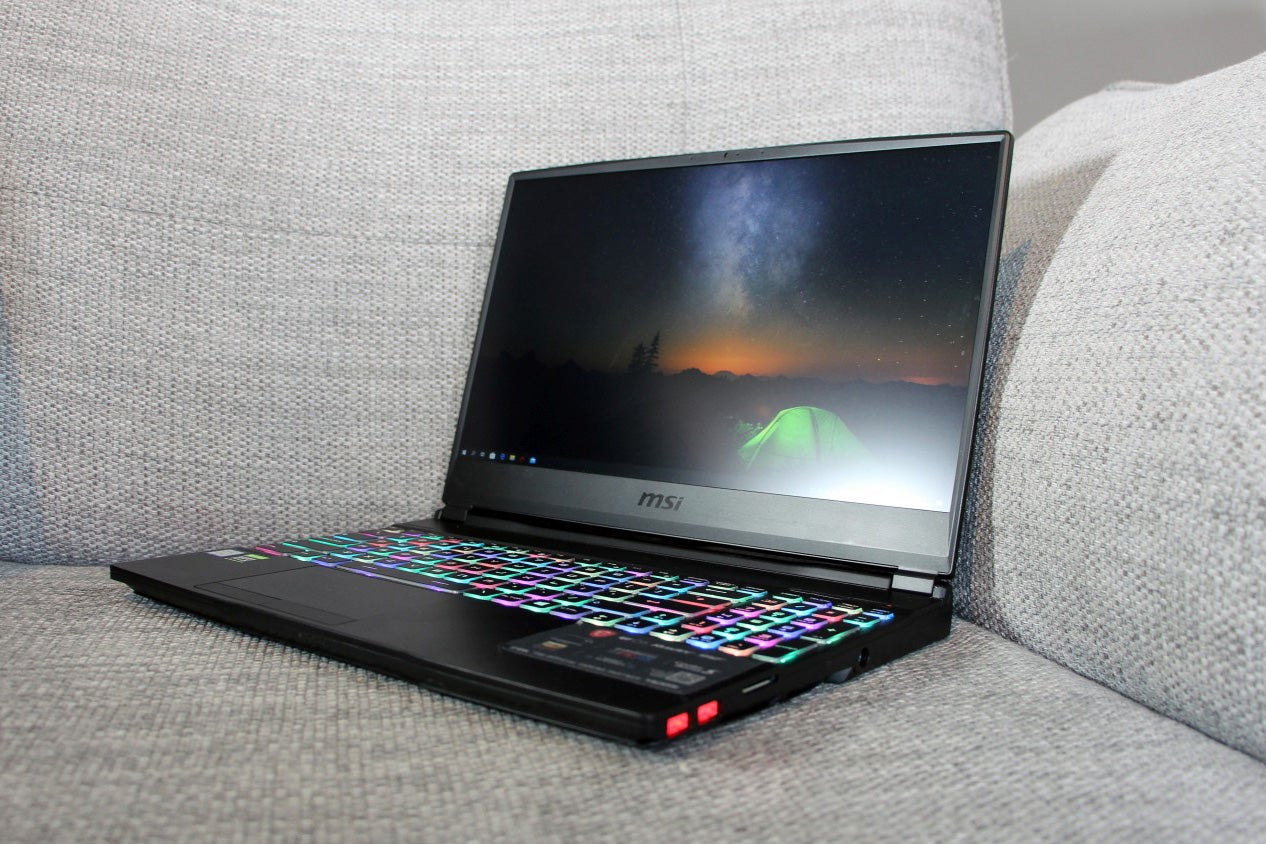 The Raider is mediocre elsewhere. Its size, for instance – this machine weighs 2.2kg and is 27mm thick, which makes it larger than virtually any rival.

MSI’s laptop only has middling build quality. The metal around the trackpad moves too much, and it’s too easy to flex the base by pressing underneath. I’d recommend anyone use a protective sleeve if they’re travelling often. 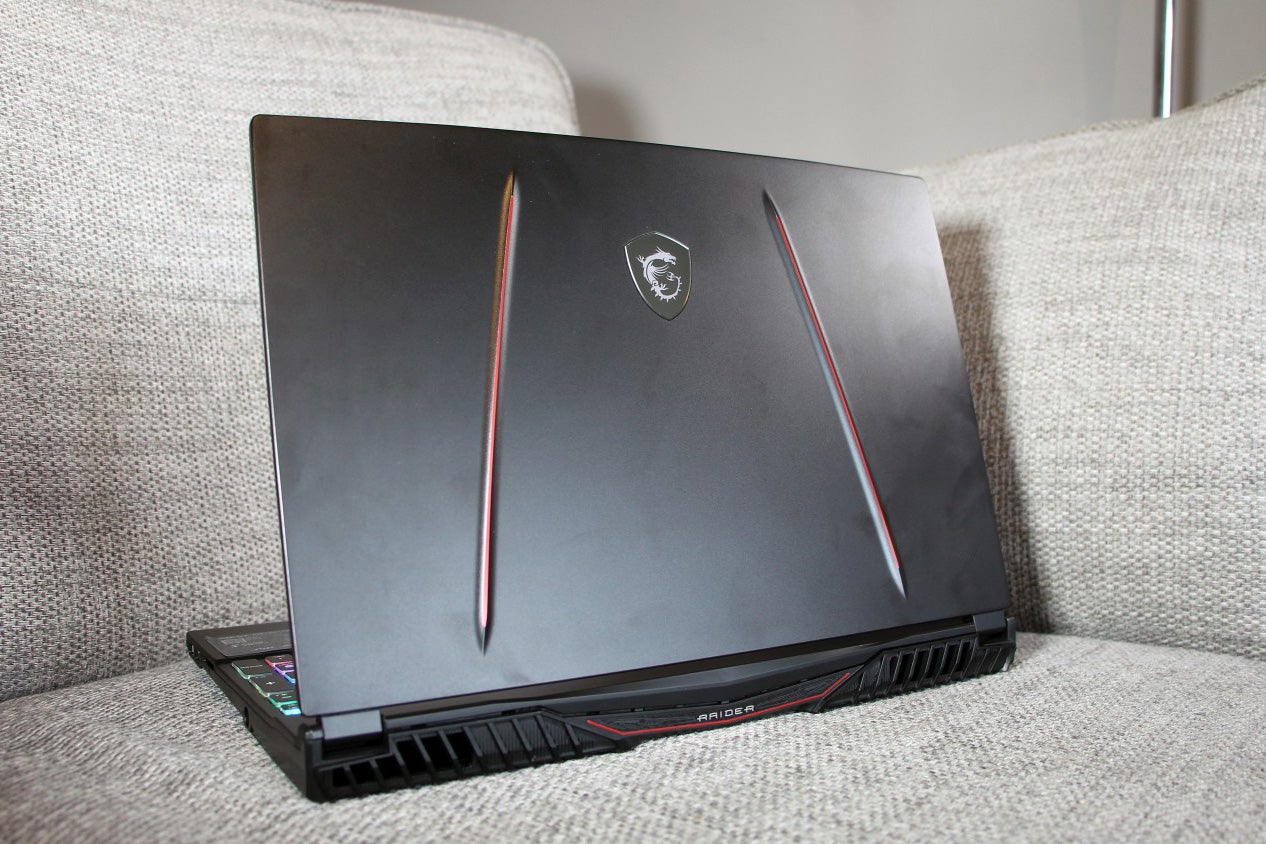 The 1080p display serves up an incredible 240Hz refresh rate. That’s vast – easily high enough to sate any top-tier eSports player. The fastest games look crisp and clear with no motion blur. This screen doesn’t have G-Sync, but at such a high refresh rate, there’s little advantage to Nvidia’s technology. 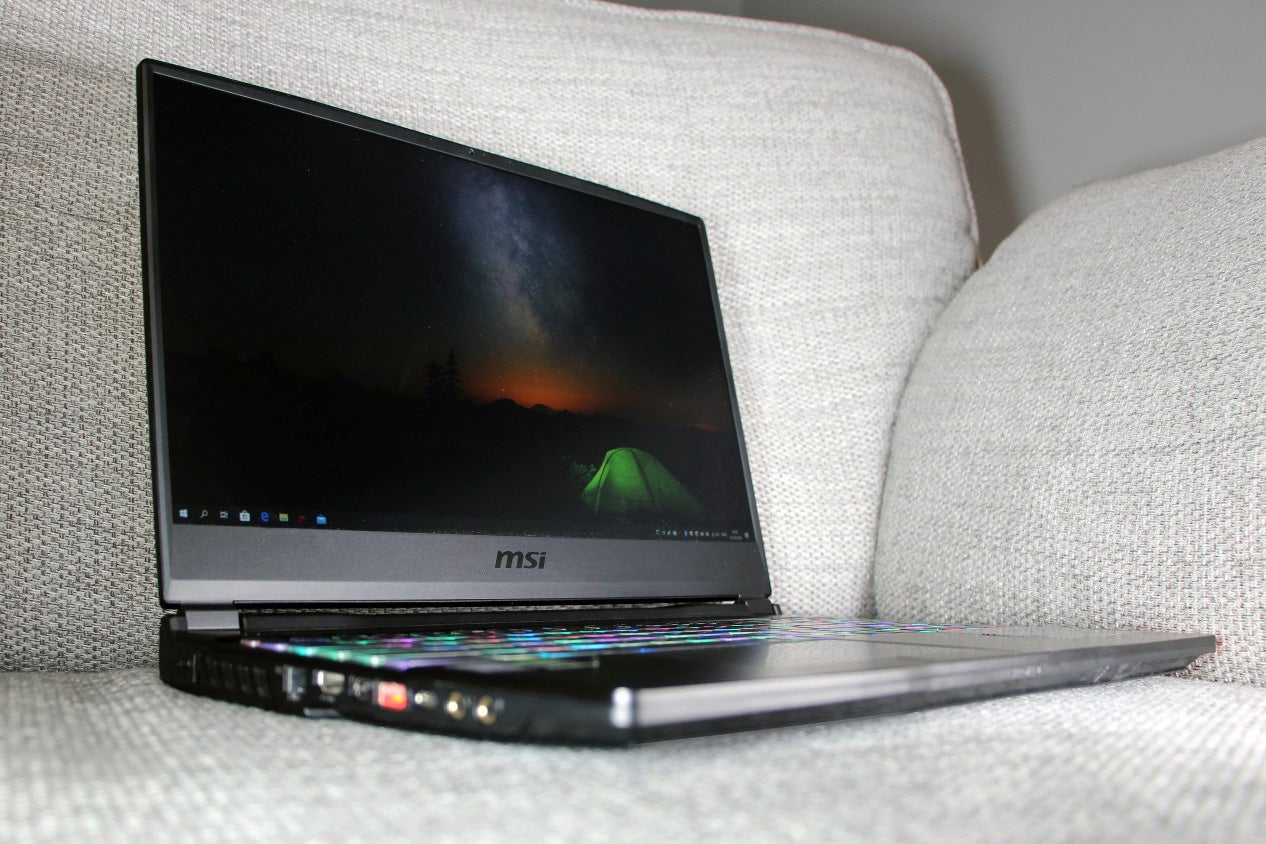 If you’re a demanding, high-level player, then you’ll want to make the switch to gain every advantage, but mainstream eSports fans would be perfectly happy with a 144Hz display.

The superb refresh rate is paired with good quality. The brightness level of 307 nits is good enough for indoor gaming, and the black point of 0.27 nits is low enough to serve up ample depth. They create a contrast ratio of 1,137:1, which ensures punchy, well-balanced colours.

The Delta E of 1.88 means accurate colours and the panel displayed 92.8% of the sRGB colour gamut, which is high enough to support mainstream games. The colour temperature of 7614K is cool, which means lighter areas look a little washed-out. 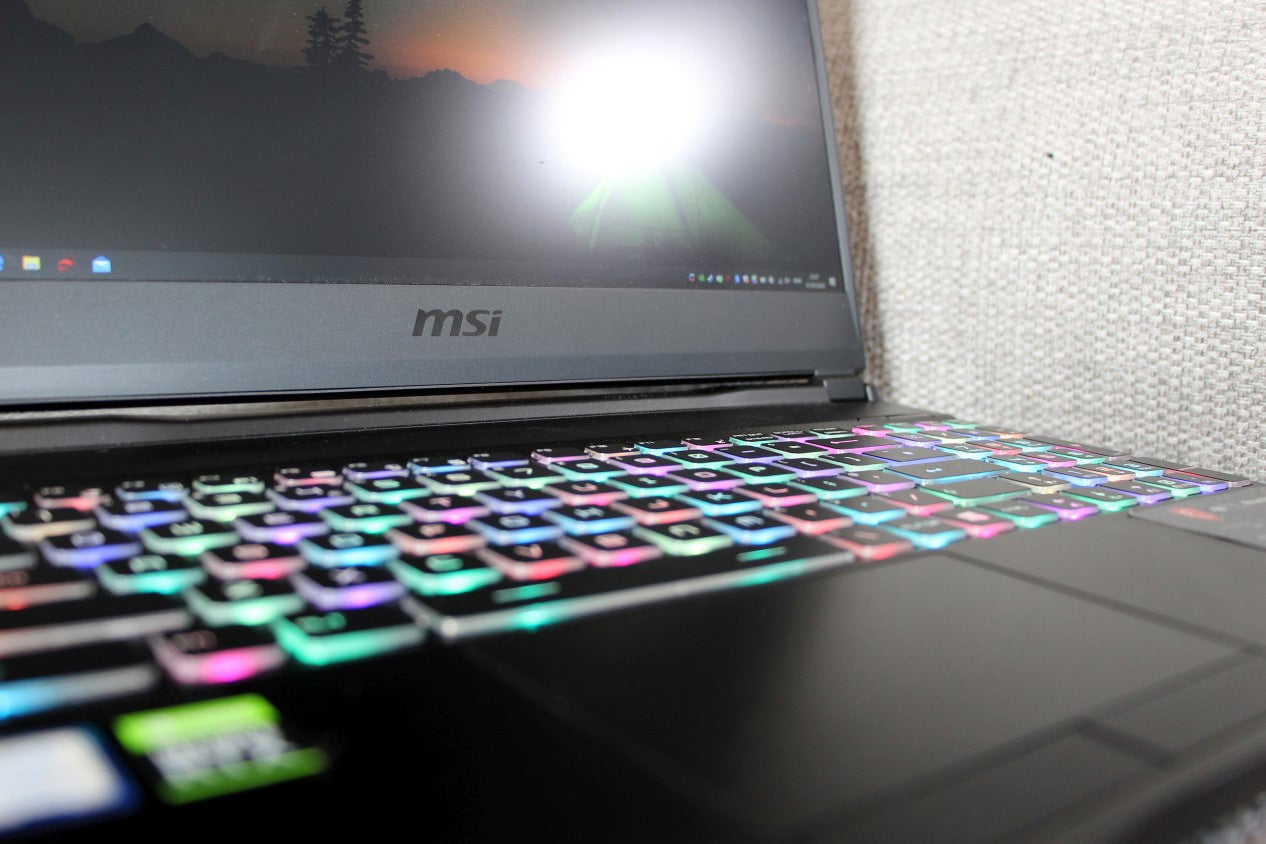 For gaming, this display is excellent – it has solid contrast and accurate colours alongside that stunning refresh rate. You’ll only need better colour temperature if you need to handle colour-sensitive work.

The speakers are loud and bassy, but those deeper tones don’t have much detail – they’re a bludgeon of indistinct noise. Mid-range sounds are underwhelming, and the top-end is tinny. A headset will be far better.

The MSI’s SteelSeries keyboard is reasonable, featuring a decent amount of travel, while the metal beneath the keyboard is sturdier to ensure more reliability and consistency.

The buttons are comfortable and fast, and it goes beyond some rivals by including a number pad. 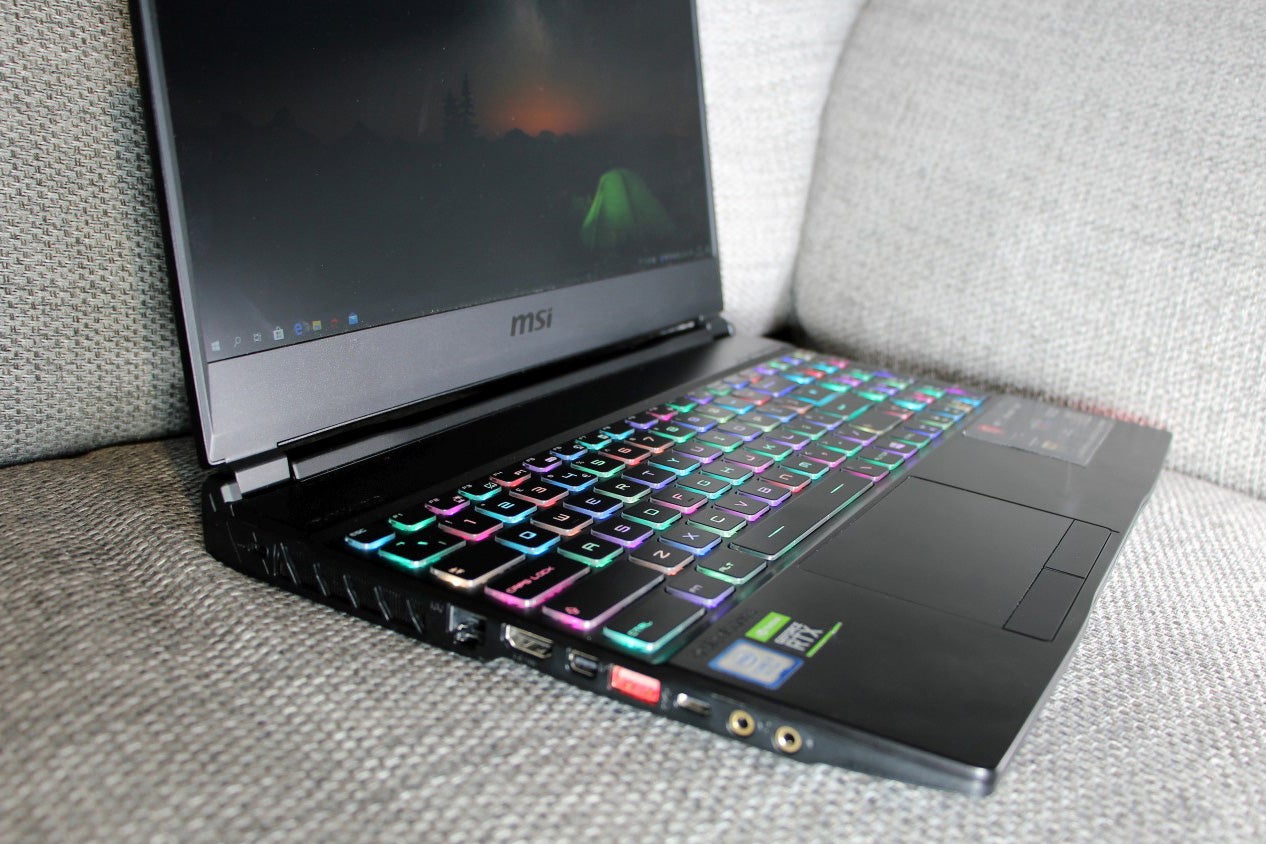 For typing and gaming, the MSI’s keyboard is good. The only way you’ll get a significant improvement is by searching out a laptop with a mechanical keyboard.

The trackpad is reasonable, but the buttons are too heavy. If you want speed and snap from mouse movements, use a USB rodent.

The MSI uses Nvidia’s full-power mobile GeForce RTX 2070 core, which means 2304 stream processors, 8GB of memory and a boost clock of 1440MHz. It’s an interesting proposition when compared to the newer RTX 2070 Super, which has more stream processors but slower clock speeds.

The full-fat RTX 2070 ran our four test games at their maximum settings with averages between 60fps and 150fps – so there’s enough speed to handle anything smoothly.

With settings dialled back to medium, our games ran between 98fps and 167fps. Considering eSports titles are less demanding than single-player games, I have no concerns about competitive action on this display – the MSI can play those games at speeds beyond 200fps. 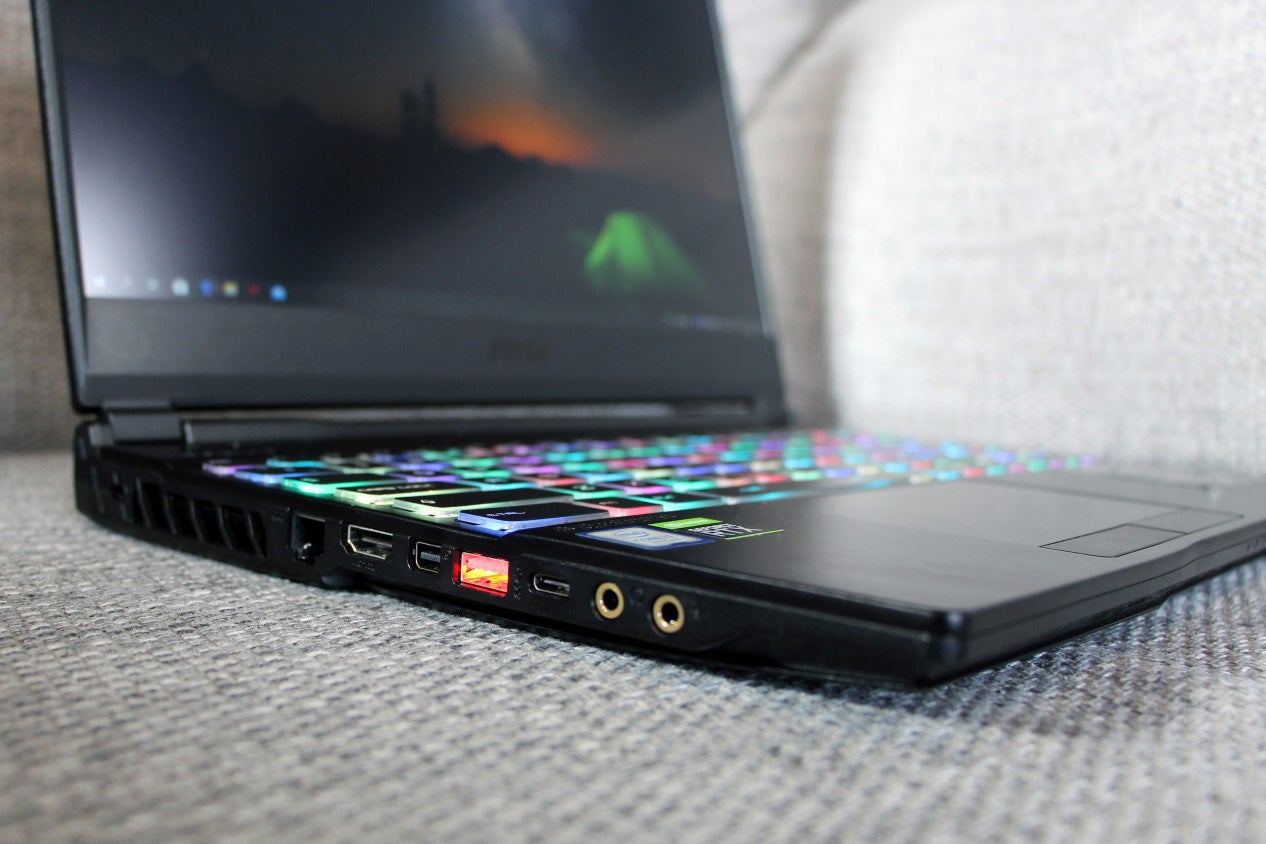 The RTX 2070 is not slow, but the RTX 2070 Super offers more well-rounded speed right now and will get faster with driver updates.

The Core i9-9880H is impressive and while it may use Intel’s older Coffee Lake architecture, it still has eight multi-threaded cores that run between 2.3GHz and 4.8GHz. It’s joined by a whopping 32GB of DDR4 memory and a 1TB SSD. Connectivity is impressive, thanks to WiFi 6 and Gigabit Ethernet.

In Geekbench 5 and Cinebench R15, the i9-9880H beat the older Intel chip, but it was a little slower than Intel’s Core i7-10785H. We used Geekbench 4 to compare the MSI’s CPU to the AMD Ryzen 9 4900HS, and the two traded blows – at conventional clock speeds the Core i9 chip was quicker, but when it was overclocked the AMD part dominated.

This powerful chip will handle almost every work task, from photo- and video editing and encoding to some CAD and database tools. For pure gaming and day-to-day computing, it’s overkill. 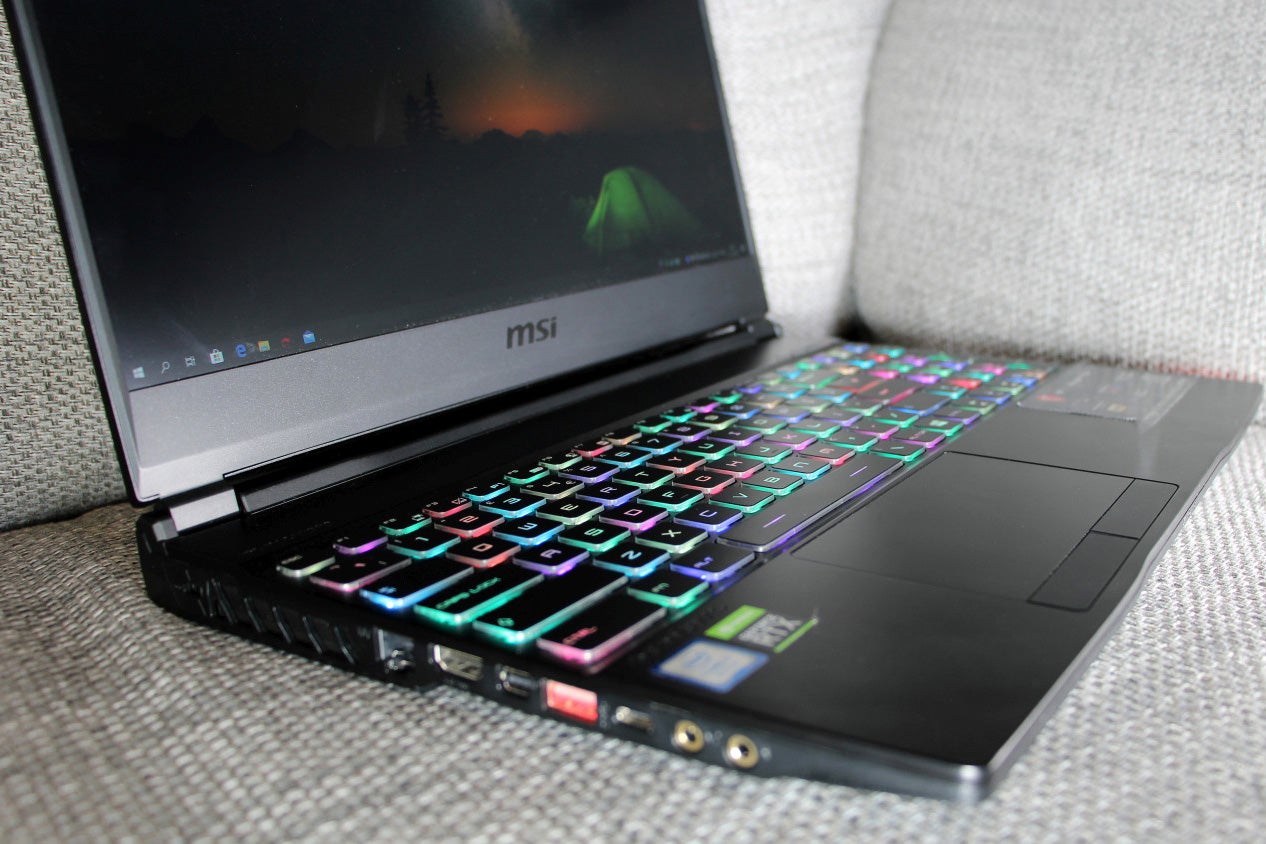 For pure CPU power, Intel’s 10th Gen parts and new AMD Ryzen chips will be a little better, but the MSI is not slow, and it’s available right now. That’s not something that can be said for the new chips – laptop companies planned to launch models soon, but supply chains have been disrupted.

The MSI has reasonable thermal performance – internal temperatures are fine and, while fan noise is present during gameplay, it’s no louder than anything else and easy to mask with a headset.

Don’t expect great battery life from this laptop, though. In our basic Powermark test the MSI lasted for a little over three hours. It barely lasted an hour when gaming.

Should you buy the MSI GE65 Raider?

The MSI GE65 Raider is powerful, capable of handling virtually any work or gaming task. The 240Hz screen is very good, especially for eSports, and it has a good keyboard and versatile connectivity.

MSI’s machine is not good-looking, slim or light, though, and its battery life is poor. It faces strong competition from forthcoming chips when that hardware eventually arrives, though, and it’s overkill unless you need the high-end CPU or 240Hz screen.

It’s also worth noting that the successor, the MSI GE66 Raider will be arriving in UK stores soon, boasting more up to date specs and a fancier design.

If you’re happy to wait, then you’ll be able to get comparable performance – or better – from cheaper, slimmer machines. But if you do need huge power or a 240Hz screen immediately, then the MSI GE65 Raider is still a decent option.