Mainstream gaming is console gaming these days. It’s as simple as that. But for high-precision games, a controller will never better a mouse and keyboard combo. You’ll need to plug a mouse into the MSI GE620 if you want to snipe away with the best on Counterstrike, but do so and its dedicated graphics card makes it a bit of an affordable gaming powerhouse.

Getting gaming performance demands serious sacrifices in several areas – one is looks. Laptops like the MSI GE620 need to fit in more components than the average “simple” laptop, so tend to be heavier and chunkier than models more adept at filling spreadsheets than polygons. At 2.6kg, this isn’t a laptop to carry around with you all day, but it packs some serious components into that girth. 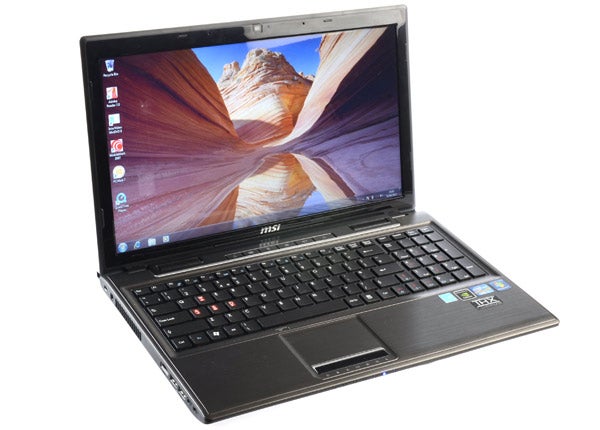 Our review configuration featured a Core i7 processor, 4GB of RAM, 500GB hard drive and the all-important GeForce GT540m graphics card. We’ll get onto what kind of performance this gets you later on.

The GE620 does demand that you care about performance, though, because its design won’t get many of you excited. Both the inside and outside are finished in plastic dressed up to look like bronze-brown brushed metal. It doesn’t look awful, but is the sort of laptop that gets certain Apple fans wondering why anyone would ever buy a PC. However, the keyboard area is pretty fingerprint-resistant – at least it won’t become an expensive set of greasy smudges within five minutes of firing-up World of Warcraft. 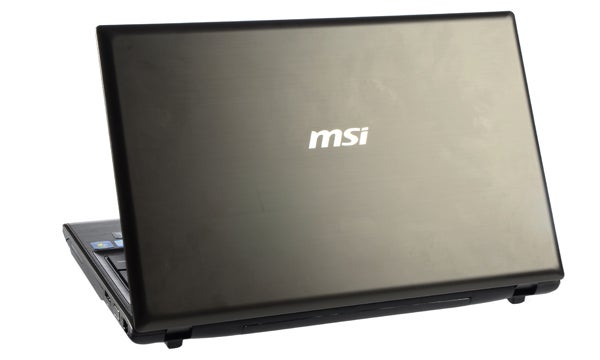 It also doesn’t have any too-loud signposts of its gaming style. There are red markers on the direction keys and the WASD keys – which will already be too much for some – but there are no LEDs hiding behind grills or cooling vents, and no OTT Alienware-style contours, ridges or extraterrestrial heads tacked-on. It’s a tad drab, but at least it’s not gaudy or offensive.

On-body connectivity is decent. There are two USB 3.0 ports on the left edge, alongside a full-size HDMI video output and mic/headphone 3.5mm sockets. This side also holds the power socket and Kensington lock (which we imagine about three buyers will actually use). On the other edge sits the Ethernet port, VGA video output and a USB 2.0 port – for old times’ sake. The DVD writer sits alongside, and is unusually opened using a button that sits above the keyboard, rather than one on the drive itself. More importantly, though, it’s not a Blu-ray player, losing the MS GE620 some entertainment brownie points.

The disc eject button sits alongside a whole row of handy physical button shortcuts above the keyboard – so a way apart from the drive itself. One shuts off the display near-instantly, to save battery while you go for a pee. Another brings up battery options. The final two launch apps – one of your choosing and the other Windows Media Player. This row of six buttons (finished off by the power button) is hemmed-in by the two speaker grills. It’s a little hive of functionality, but the MSI GE620 would look a whole lot classier if this whole area was covered with the plain, pervasive faux-metal that smothers the rest of the laptop. Then again, it wouldn’t be a proper gaming PC if it didn’t look at least a bit outlandish.

The MSI GE620’s keyboard may feature red gaming-focused decals, but otherwise it’s fairly unassuming. It uses chiclet-style keys, with a pretty shallow action. A little more travel in the keys would afford the laptop a more satisfying typing experience.

The layout also takes a little getting used to. In order to give the numerical keypad due prominence – as something used extensively in games – several keys towards the right of the ‘board have been chopped down. The Enter button, right shift and Backspace keys are all pretty dinky, and will result in many a mis-fired key press during the first few hours of use. If you’re out for an all-purpose laptop rather than one that’ll be used a lot for gaming, this is something to consider. There’s no keyboard backlight, but that’s no surprise in a powerful sub-£800 laptop.

That said, as with any muscle memory quibbles, the custom layout is something you’ll soon get used to unless you’ll be constantly flipping between this keyboard and one with a standard layout – a work laptop or desktop, perhaps.

The display is a little less gaming-optimised than the keyboard. It’s 15.6in across, but has a 1,366×768 pixel resolution rather than a more desirable 1080p screen available on a smattering of laptops around the £800 mark, the Asus N53SN a key example. Still, these laptops either cost at least £100 more or offer lesser specs.

Viewing angles are above average, helped in use by the limited motion of the screen hinge, which locks at around 135 degrees, before the worst effects of contrast shift really kick in. Maximum brightness is, like the screen performance in general, decent but not spectacular.

Arguably making bolder claims about their performance are the conspicuous speaker outlets below the display. Ignoring the current trend of getting in bed with a big audio brand, like HP with its Beats laptops, the GE620s audio claims are limited to the THX TruStudio Pro software. This offers equalisation, small speaker sound optimisation and faux-surround. It won’t turn a bad speaker setup into a good one, rather tailoring the sound to make the most of a compromised setup. 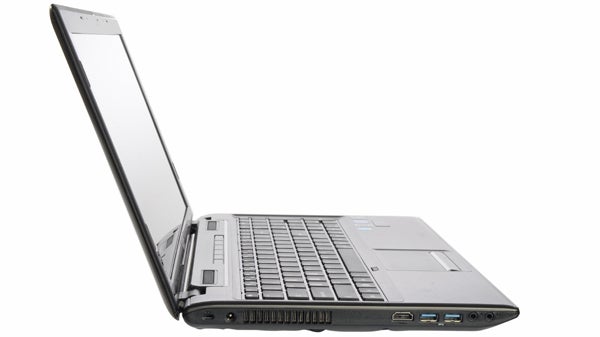 The MSI GE620’s internal speakers are not hugely loud, but also don’t distort as a result. There’s naturally no real bass here, but some lower-mid warmth makes for a reasonable substitute. The sound is boxy, with little treble sparkle, but this prevents a tinny or harsh sound. This laptop plays it safe, and in this case that’s perfectly ok.

Its trackpad is similarly unambitious. Rather small and of the same finish as the chassis, it doesn’t beg to stand out. The pad’s surface is textured with tiny dimples – initially less comfortable to glide across than a more subtly-textured surface, but it offers a good level of friction that partly makes up for its small size. 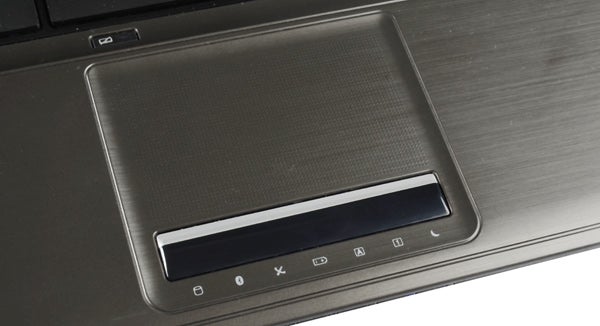 The button bar is a single two-tone bar, and has an unusually large dead zone in the middle – about 2cm’s worth. This is a little large in our opinion. Above the trackpad, there’s a disabler button, which comes in very handy when using the laptop on a train.

Of course, if you are just going to read PDFs and gawk at Excel files on the way to work with the MSI GE620, you’re looking at the wrong laptop for the job.

The MSI GE620 has some serious power to draw upon, thanks to its excellent Core i7 processor and dedicated graphics chip. Its quad-core i7 CPU runs at 2GHz and will handle virtually any productivity task you could throw at it. The one key limitation here is that there’s “just” 4GB of RAM – hardly a paltry amount, but nevertheless dwarfed by the 8GB offered by the Acer Aspire Ethos 5951G.

This extra RAM would come in handy with tasks requiring bundles of data to be thrown around, such as video editing. Nevertheless, the GE620 achieved a very solid score in our PCMark Vantage benchmark, 8228 points. It positively trashes its Core i5 rivals, in spite of having less RAM.

In gaming, the bottleneck is highly likely to be the graphics card, rather than the RAM or processor so it’s lucky there’s mid-range GeForce GT540m 1GB model in this laptop. Although not a card powerful enough to play the latest games with all shaders set to kill and enough shadow processing to block out the sun, it will handle new games with settings dumbed-down a bit. It fared well in our S.T.A.L.K.E.R. test, coming out with a silky smooth 59fps on average.

The MSI GE620 comes with a light layer of MSI-flavoured bloatware to slow down proceedings a tiny bit, but it’s mostly inoffensive stuff and – as usual – easy to remove. One that sticks out is the S-bar. It manifests as a blue star that sits near the top of the screen, bringing up an options bar at the top of the screen when the mouse cursor rolls over it. It’s most unnecessary, doubling-up on features already offered by the dedicated hardware buttons and secondary functions on the keyboard, and is about as classy as a children’s party magician – but easy enough to uninstall.

Faced with our standard MobileMark battery test, which simulates normal productivity-based usage, the GE620 lasted for 207 minutes. Like the 2.6kg weight, it ensures this isn’t a day-to-day portable device, but will suffice for occasional trips away from the plug socket. However, it’s a good hour less than some similarly-priced alternatives – albeit ones with less powerful processors. 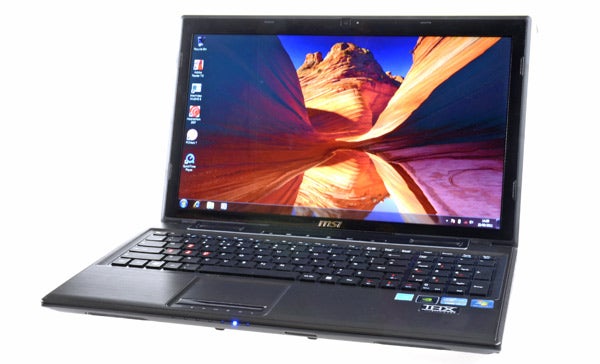 Its CPU and GPU combo makes this laptop a formidable package that’s good value at £779. However, it’s not alone here. The Acer 5750G and Asus N53SV offer the same graphics card – and hence comparable gaming performance – for as much as £200 less. They don’t have the cracking i7 processor too, though, and do have slightly worse screen performance, so the price difference is not entirely unjustified.

The MSI GE620 is a solid all-rounder, offering a great processor and decent graphics card at a reasonable price. However, its design is uninspired and the lack of a Blu-ray drive is slightly disappointing – it could have marked this model as one of the best entertainment laptops in its category. 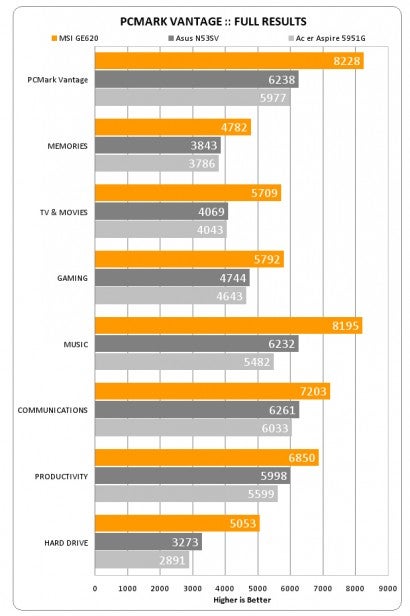