The GE62 is MSI’s relatively
slim and lightweight 15.6in gaming laptop chassis that provides lots of
performance without too much bulk. This 2QD Apache version is primarily
defined by its choice of graphics card, with it using the mid-range
Nvidia GTX 960M, with other GE62 models using the higher-end GTX 965M
and GTX970M.

It also features optional triple-SSD SuperRAID, a
multi-colour backlit SteelSeries keyboard and a 1920 x 1080 IPS LCD
display. Priced at £1099 from Scan.co.uk it’s potentially a great option for those
wanting a good all-round powerful laptop that isn’t going to break the bank or your back.

One area
where MSI has traditionally struggled with its gaming laptops is on the
design front. They’ve tended to err on the side of garish but this is
something the company has tried to address with its latest models,
toning down the bright colours and ‘gamer’ looking features. 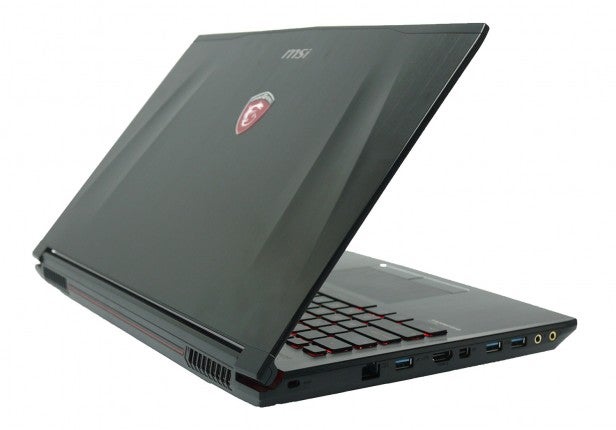 As
such this GE62 2QD Apache has a nicely muted look to it. There are a
few nods to the more aggressive, angular styles of before but it’s
largely subtle while the top of the lid and top of the keyboard surround
are finished in sheets of brushed aluminium, for a slightly more
premium feel.

The two little nods to classic gaming laptop
styling are the illuminated MSI Gaming logo on the lid and the thin
strip of red that runs along the front edge.

It’s an effort
that’s appreciated but isn’t entirely successful. Aside from the metal
plates the chassis has a decidedly cheap plasticky feel to it that isn’t
a patch on the soft-touch plastic finish of Alienware’s laptops, for
instance.

Indeed there’s a distinct lack of finesse to much of
the chassis. The rubber nubs used to cushion the lid look really busy
while the underside is a chaos of ventilation grilles and if you pickup
the laptop by its front edge with the lid open it flexes enough that it
presses both the trackpad buttons. 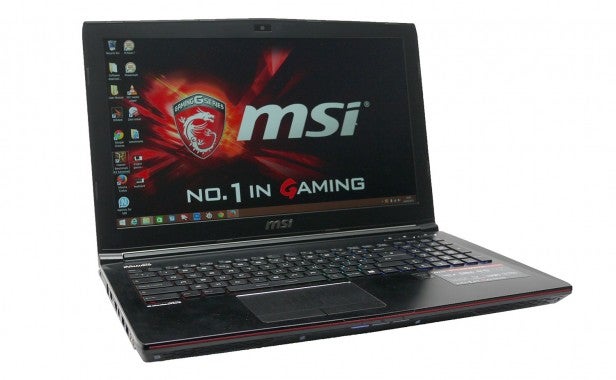 In
terms of its headline slimness and light weight, though, MSI has put
together an impressive machine. At just 27mm thick and weighing 2.4kg it
really is noticeably slimmer and lighter than many rivals.

In
particular, if compared to something like the Alienware 15, the
difference in daily ease of use is profound. The latter’s 34mm thickness
and 3.1kg weight really do make it the sort of machine you almost never
want to move. The MSI, though, you can quite happily take with you
round the house and obviously it’s that bit more portable for when
leaving the house too, though we’d still suggest it’s a little bulky to
be slinging in a backpack everyday.

What’s doubly impressive is that MSI has managed to make such a slim and light machine that still includes an optical drive.

Rather
annoyingly, though, MSI has not provided an easily removable panel to
access some of the upgradeable parts of this machine. Indeed it has even
covered one of the screw holes on the bottom with a warranty sticker
meaning any tampering will void it.

This is a shame as there’s
plenty of upgrade potential here, with three mSATA SSD slots, a 2.5in
hard drive slot, two RAM slots and the Wi-Fi card all accessible. 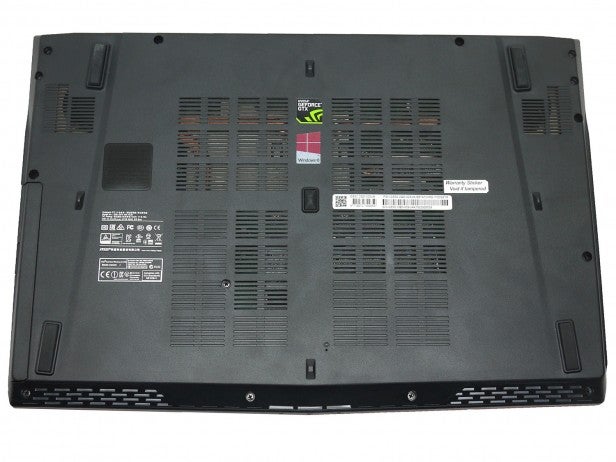 gaming laptop manufacturers that sell direct, such as Alienware and
XMG, MSI sells its laptops as complete, non-configurable machines. That
said, there are supposed to be a number of configurations available,
though we’re yet to see any alternatives to the one we’re reviewing here
– there are models that use the same chassis but have different names
such as the GE62 2QF Apache Pro.

All
this comes in at £1099 which is very competitive, especially
considering the extras such as the SteelSeries backlit keyboard, Killer
LAN and partially metal chassis.

Connectivity-wise you’ve got
three USB 3.0 ports down the left edge along with the Ethernet socket,
HDMI, mini DisplayPort, headphone and microphone jacks. On the right is
the SD card reader, a USB 2.0 port and the DVD drive.

Other
extras include a Cooler Boost button which sits next to the power
button and ramps up the fans to make doubly sure your CPU and GPU
performance isn’t being restricted by overly high temperatures. Next to
this is also the SteelSeries button which is used to cycle through the
keyboard’s various backlight modes.