MSI is not known for its drop-dead gorgeous laptops. While plenty are daubed with spots of colour, their designs are more likely to inspire thoughts of tax returns than the great artists’ masterpieces. The MSI CR640 is an attempt to reverse this trend, with a look that claims to be based on premium sedan cars.

In practice what this entails is a power button that’s like the ignition button of a sports car and a finish that uses a brushed metal-style texture rather than good old standard black. However, contrary to the suggestion of quality this raises, the MSI CR640 is an all-plastic laptop. There are plenty of elements here that look like they could – or should – be made from metal, but they’re not. So while build quality is reasonably solid it lacks that premium feel. Laptops at this price tend to though.

The ultra-shiny finish of the CR640 is not quite classy, but it resists fingerprints and greasy smudges that a glossy black finish would attract within minutes. It seems a shame that the front of the laptop features so many shades of silver – two around the speaker housing, two more around the trackpad – as they make sure it’s fair to say that MSI’s attempt to create (self-titled) “epoch-making” products here has failed.

The 15.6in MSI CR640 is also equipped with 4GB of DDR III RAM, in a 2x2GB stick arrangement, and has a 5400rpm 320GB hard drive. For all its attempts to differentiate itself from the crowd with its cod-macho styling, its spec list is rather ordinary.

Along the right edge of the laptop are headphone and microphone 3.5mm jacks, two USB slots and the tray-based DVD recorder. There’s no Blu-ray on offer here, or in its more expensive CX640 sibling. 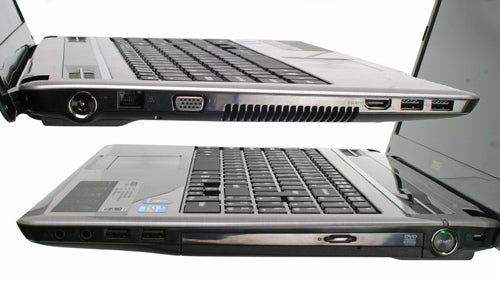 Across on the other edge sit two more USB slots, an HDMI output, VGA connector and a Gigabit Ethernet port. Although MSI has advertised the CR640 as available with an additional two USB 3.0 ports, they weren’t present on our review model – we’re stuck with USB 2.0 here. USB 3.0 offers around three times the data transfer rate of 2.0 in real-life use so be sure to check if you’re also investing in a shiny new USB 3.0 external hard drive.

On the front edge there is an SD/MMC/MemoryStick Pro card reader, which is capable of reading ultra-high capacity SDXC cards. One of the more successful elements of the MSI CR640’s design, in pure aesthetic terms, is the speaker above the keyboard. Like the monitor bezel it’s glossy black, book-ended by stereo speaker grilles, each bisected by a silver spear (yes, it’s plastic rather than metal). It’s one of just a few parts of the notebook that seems conspicuously designed – rather than just daubed with a non-standard finish.

The MSI CR640 uses a 15.6in LCD screen with a 1377×768 resolution panel. It has a glossy surface, so won’t thank you for being taken outside during those short summer months – it picks up reflections very easily.

The backlight of our review model was extremely even, with no signs of bleed whatsoever.  Horizontal viewing angles are decent, but vertical angles are limited by some significant contrast shift. Tilt the screen back too far and most shadow detail is lost. The MSI CR640 performs better in this respect than some mid-range laptops, but we still found contrast shift noticeable when watching video, using a normal screen angle. 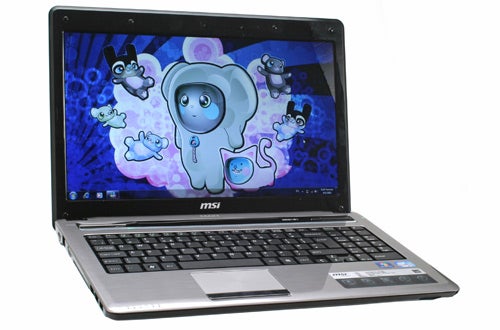 The bezel of the laptop houses an ambient light sensor that can be used to control the backlight level automatically. It’s reasonably effective and could help you save some battery depending on the variety of environments you hang around in. It can be turned off in a second using one the F-key shortcuts.

Other secondary functions mapped to the F-keys are the standards of switching Wi-Fi, power modes and enabling/disabling the trackpad. The keyboard surround is refreshingly flex-free, but unfortunately the keyboard itself is not of super-high quality. It uses chiclet keys and the action is not definite enough. There’s too much sponginess, too much give after the connection has already been made. We expect this a symptom of imperfect design rather than a real failing in basic build quality – so it’s something you’ll get used to in time, but much better keyboards are available at the price. 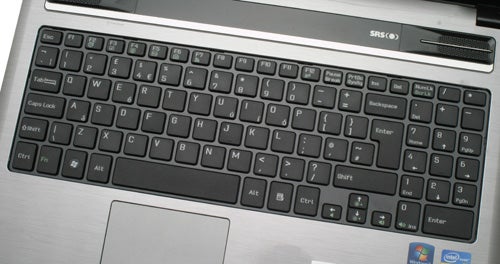 The trackpad isn’t without problems too. As part of the laptop’s “dynamic” styling, it features a texture of concentric circles radiating out from the centre. This means that the friction exerted against your fingertip changes depending on the angle of movement, and that it gives off the odd squeaking noise as part of this bargain.

Even MSI can’t forgo the laws of physics for the sake of a killer look. The trackpad’s of a reasonable size though, so it’s the sort of quibble you can weather through with a bit of patience. And hey, if you get bored you can pretend you’re a DJ and start scratching away at the thing.

The MSI CR640 features the one of the lowest-end models of the new Sandy Bridge family, the 2.1GHz i3-2310M dual-core processor

For not much more money, you can upgrade to the CX640, which features an i5 processor and dedicated graphics card, but for all non-intensive tasks this basic model is sufficient. For gaming, video editing or encoding though, you’d be better off with a higher-end model.

In our productivity test, it achieved 5152 – solid performance for a mid-range model like this, comfortably beating previous generation devices like the MSI FX600. This is down to the power of the Sandy Bridge processor, which we first saw in the MSI GT680. Gaming performance was, predictably, less impressive. It managed an almost-playable 17fps at the display’s native resolution. Like any computer with integrated graphics, this isn’t a gaming machine. For an extra performance injection, memory can be upgraded to 8GB, from the initial 4GB, but this will require ditching the two 2GB sticks in favour of a duo of 4GB sticks.

MSI has included a few software optimisations to help speed up day-to-day usage, but this is for the most part this is the sort of bloatware packed into the majority of laptops these days. Fast Boot is handy, decompressing the BIOS image into RAM memory for a claimed start up time half as long as a “normal” laptop. We found the CX640 made it from a fully powered-down state to the Windows 7 desktop in just over 40 seconds.

It offers a 6-cell 4400mAh battery, which survived for 273 (4 hours 33 mins) minutes in our MobileMark productivity test and 179 (2 hours 59 mins) minutes in our DVD playback test, using maximum brightness. This is lower than the claimed 8-hour battery life, but is roughly indicative of what you’ll get in real-life usage. 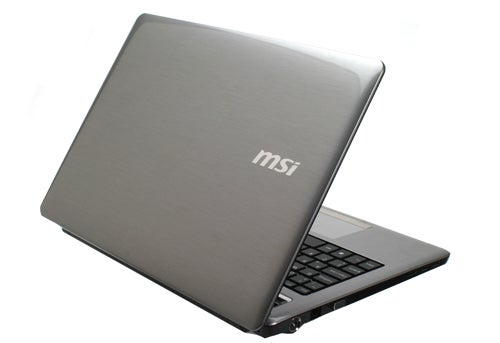 Sandy Bridge laptops are currently flooding onto the market, and in spite of its design baubles – like the sports car-style power button – it doesn’t stand out enough. The Dell Inspiron 15R offers a better keyboard costs around £50 less, and the Acer Aspire 5742 is even cheaper. The MSI CR640 asks you to pay extra for its superfluous tweaks, and it’s quite simply not worth it.

The MSI CR640 is a better-looking laptop than MSI’s standard fare, but an unimpressive keyboard and plasticy build rob the laptop of its chance to make an impact among its Sandy Bridge rivals. The bolder design elements, like the speakers and sports car-style power button, aren’t bad-looking but they’re not worth paying extra for.

Still, battery life is decent for a desktop replacement device. And with a Sandy Bridge i3 processor and the latest Intel HD 3000 integrated graphics, it’ll handle most non-intensive productivity tasks and basic gaming just fine.