MicroATX is an increasingly popular form factor thanks to its keen balance between a smaller size and ample features. The MSI B350M Mortar is the latest product to combine this kind of design with AMD’s latest hardware.

The Mortar’s affordable price means it relies on AMD’s mid-range B350 chipset. This part sits below the top-tier X370 design in the firm’s heirarchy, which means a reasonable set of features that still suffers from some cutbacks. 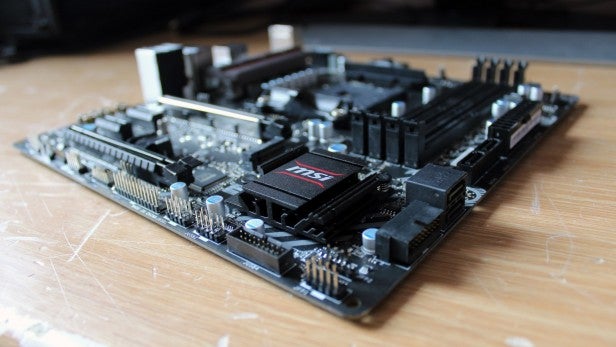 The B350 chipset serves up most of Ryzen’s benefits, including AMD’s full compliment of SATA and USB connectivity, alongside more PCI lanes than any other new AMD chipset. That’s important if you want to put together a rig with high-end graphics and an NVMe SSD.

The board follows the chipset – it doesn’t have many frills, but it delivers everything required to build a solid gaming PC. Its single full-speed PCI-Express x16 socket is steel-reinforced, and there are two PCI-Express x1 slots and a slower x16 socket beneath.

There’s a single M.2 slot, and four memory sockets support 3200MHz DDR4 – a fine speed, although larger and pricier boards can go faster. And, because of that chipset, there are four SATA connectors rather than the usual six. 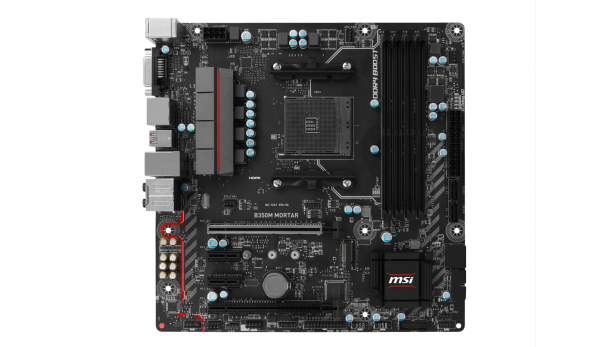 In several other areas the MSI delivers fine mid-range features. It’s got beefed-up audio and game-friendly Ethernet, although you’ll find better silicon on pricier and larger boards – and it has LEDs around the back to give the board an ethereal glow, but they’re locked to red and aren’t RGB. Regardless of that, there’s an LED header, so strips of lights can be synchronised with that colour and whichever flashing pattern you choose.

There aren’t any buttons or POST displays, but that’s hardly a surprise on a board that’s priced so modestly. MSI lets the hardware and those red LEDs do the talking, too – its heatsinks are subtle chunks of dark metal, and there’s no shroud over the rear IO.

I like MSI’s Command Center tool, which is used to manage most of this board’s features. It can monitor temperatures, clock speeds and fans, be used for overclocking, and keep the machine updated.

Its single-core Geekbench 4 score of 4528 is one of the better results I’ve recorded from an AMD Ryzen board, and it scored 23,451 in the multi-tasking test – a result that places it right in the middle of the group.

That’s enough pace to handle all sorts of work tasks and avoid bottlenecking games, and they’re bolstered by solid storage: the Mortar’s read and write speeds of 519MB/s and 516MB/s are some of the best using Ryzen. The B350M’s lesser chipset is clearly no hindrance here.

The Mortar’s poorest score came in the 3D Mark test. Its result of 6881 is almost 100 points behind the best AMD boards. That’s not enough to make a big difference in real-world gameplay, but in the world of motherboards it’s a pretty big gap – especially when the boards are all tested with identical hardware. 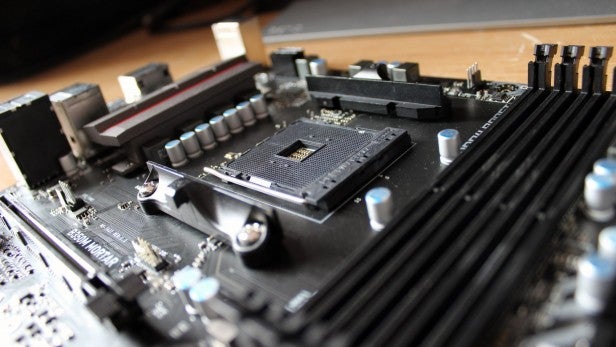 It’s not a particularly frugal PCB, either, despite its microATX form factor. Its 59W idle draw is mediocre, and its peak requirement of 123W is worse – only a high-end gaming board required more from the mains.

Should I Buy the MSI B350M Mortar?

Still, I can’t expect too much from a small and very affordable board – and in key areas, the Mortar gets it right. It’s solid in applications, and its gaming result won’t hinder most titles.

It’s got decent features, too. The AMD B350 chipset won’t restrict most rigs, and it has enough slots, sockets, ports and bandwidth to support top-tier modern components – only those looking for dual-graphics or complex storage will be found wanting.

For £85/$109, then, this board can form the basis of a capable, reliable and smaller AMD-based PC – and that’s why it’s a top microATX choice.

The MSI delivers solid performance in benchmarks, and its specification ticks the basic boxes without adding extra gimmicks or high-end features. That helps make its £85/$109 price extremely reasonable, and that makes it a great option for an affordable micro-ATX build.