MSI’s B350 PC Mate offers middling-to-poor performance across most of our benchmarks, plus it lacks the gaming focus of its key rival, the Gigabyte AB350-Gaming.

The MSI B350 PC Mate costs just £75. That bargain price makes it the most affordable board in this whole AMD M4 group test – several times cheaper than pricier models, and £8 less than its closet rival Gigabyte AB350-Gaming.

For that money, however, you’re getting a necessarily cut-back specification, and average design too. 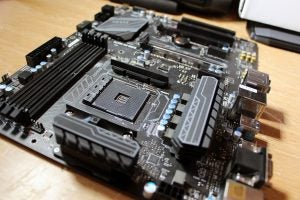 The B350 PC Mate has four memory slots that support 64GB of DDR4, but the memory speed tops out at 3200MHz. That’s a lower figure than more expensive boards, but it’s the same as the Gigabyte AB350-Gaming – and it’s entirely adequate for more affordable PC builds.

MSI’s board has two PCI-E x16 slots and technically supports dual-graphics with AMD CrossFire. However, while the top slot is bolstered with steel and runs at its full speed, the second connector runs at only x4 speed. As such, dual-graphics won’t work on a practical level – just like the Gigabyte AB350-Gaming. The MSI board has two PCI-E x1 slots, but – unusually – it has two PCI connectors, which could be handy if you want to use older expansion cards.

Elsewhere, the MSI trades blows with the Gigabyte AB350-Gaming. Both boards have one full-speed M.2 connector and one eight-pin CPU power plug. The MSI only has four SATA ports, as opposed to the Gigabyte’s six – but its Realtek ALC892 audio chipset is slightly better than the Gigabyte’s ALC887.

The MSI has six fan connectors rather than the Gigabyte’s four, and it has two on-board USB 3 jumpers. Gigabyte’s board only has one. The MSI only has three USB 3.1 connectors – the Gigabyte has five – but the MSI does have USB Type-C.

The MSI arguably looks better too. Its heatsinks are larger and more striking, with smart metallic patterns and the neat patterns carry over to the board itself. All the slots are black, which gives the board a sleek look. There are no decorate LEDs, but that’s no surprise.

The B350 PC Mate competes well with the Gigabyte AB350-Gaming. It does offer USB Type-C, PCI slots and more fan connectivity, but it loses out on PCI-E x1 slots, full-size USB 3.1 ports and SATA connections. Which board you choose will depend on the kind of machine you want to build.

The B350 PC Mate is one of the cheapest new boards currently out there – and, sadly, that shows in its benchmark results.

It can’t compete with the Gigabyte AB350-Gaming in gaming, which is no surprise considering the latter board’s game-friendly design and branding. The MSI’s 3DMark: Time Spy and Fire Strike scores of 4112 and 10,764 are both behind the Gigabyte, and towards the bottom of the entire AMD AM4 group.

Its Middle-earth: Shadow of Mordor average of 91.43fps was one of the poorest in the group, and it was the worst-performing board in Rise of the Tomb Raider. The Gigabyte was noticeably quicker in both titles.

I expected the MSI to be sluggish in games, but it wasn’t much faster in applications either. Its Cinebench single- and multi-core results of 175cb and 1341cb are among the worst in the group. In Geekbench tests it returned scores of 4734 and 21,262. Those figures trade blows with the Gigabyte, with neither board excelling here.

Neither did the MSI impress in storage tests. In these benchmarks it either propped up the results tables or couldn’t escape the bottom half. That, again, is another area where the MSI matches the Gigabyte.

The MSI only really excelled in power draw tests. When idling it required just 59W from the mains; that figure rose to 109W during a CPU stress-test. Both of those results are the best in the entire group.

As ever, motherboard benchmarks deal in fine margins. While MSI’s board is quite regularly one of the slowest I’ve tested, it’s never too far behind more expensive boards offering better performance. And, in many tests, it’s level with the affordable Gigabyte option.

However, there’s still no denying that the MSI is slow, and that Gigabyte’s board is certainly a better option for gaming.

The MSI’s specification does make it a viable option for budget and all-round PC builds, and its connectivity is a little better than the Gigabyte. But the MSI is only worth considering if you’re on an extremely tight budget.

MSI’s board trades blows with its big rival from Gigabyte, with some connectivity successes and other areas where it falls behind. It isn’t a great performer, either, with middling-to-poor pace across most of our benchmarks. The specification is solid enough for basic PCs, but the Gigabyte is a better budget option for gaming.