This MSI 770-C45 motherboard gives us a chance to use our MSI decoder chart to work out what level of specification you get for a price that is just below £53. While the 770 chipset supports Phenom II, it doesn’t have an integrated graphics core, unlike 780G and 790GX, so you’ll be glad to hear that it does at least pack a PCI Express2.0 graphics slot.


It’s the C45 suffix that starts the alarms bells ringing as the C stands for Classic, the 4 is the equivalent of the old MSI Gold name and the 5 means it has a basic specification. Classic, Gold and Basic are three different ways of saying the same thing: that you get the bare minimum in the way of features on this model. 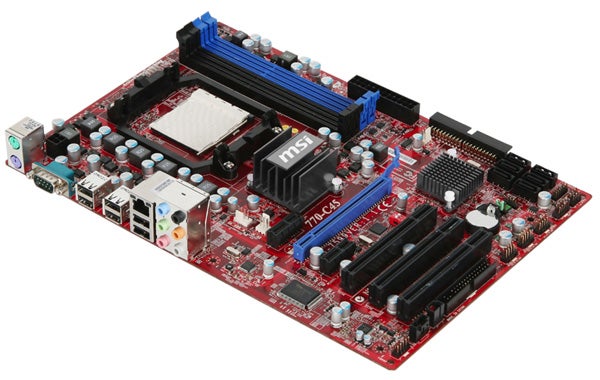 MSI has chosen to manufacture the 770-C45 with dimensions that are only slightly smaller than a full sized ATX motherboard at 305mm x 210mm, rather than 305mm x 244mm. As the 770 chipset only supports a single graphics card you don’t get the option of CrossFire and this means that there is plenty of room for the expansion slots. In addition to the single PCI Express x16 graphics slot there are two PCI Express x1 slots and three PCI slots and it is something of a mystery what we are supposed to do with this largesse.


Likewise, the integrated Realtek ALC888S audio is rather basic as it does not support a digital connection, so you only get six analogue mini jacks on the I/O panel. On the other hand it supports HD Audio in Windows Vista so the audio is perfectly serviceable for most desktop PCs, though you might choose to install a sound card. That’s one slot spoken for.


AMD’s SB710 Southbridge supports SATA RAID and there are six SATA connectors, as well as one ATA133 connector and a floppy drive connector, so it seems unlikely you will want to install a RAID card on the 770-C45. It’s a similar story with the Gigabit Ethernet, which does a decent job so you are unlikely to install a PCI network card.

The only part of the specification that can be said to be lacking is the absence of a Firewire port. Camcorder enthusiasts may be grateful that they have the option of adding a Firewire card, but honestly we’re scratching around here and have no idea why MSI didn’t bite the bullet and build the 770-C45 as a Micro-ATX motherboard.

Another look at our MSI decoder chart tells us that this change would make it the model code 770M-C45.


One area that could be considered marginal is the six USB ports on the I/O panel, but MSI does include headers for six more ports that are ideal if you have USB ports on your case.


The headers arrayed across the foot of the board are labelled with tiny letters, but they are not colour coded, so you’d be wise to spend a good few minutes checking and rechecking your connections.

Turning to the top half of the board we find lots of fresh air around the AM3 processor socket, and this is where we come to the crux of the 770-C45. This motherboard supports AMD’s latest AM3 models of Phenom II with four DDR3 memory slots, but it does it on a shoestring budget.


The power regulation is four plus one, which looks rather basic in a world of eight and 16 phase motherboards. In fairness the 770-C45 employs some intelligence in its power regulation as it uses APS (Active Phase Switching) and has four tiny blue LEDs at the top end of the board so you can keep an eye on what the APS system is doing, should you so choose. MSI’s 770-C35 model is the same as the 770-C45 except that it does not have APS. 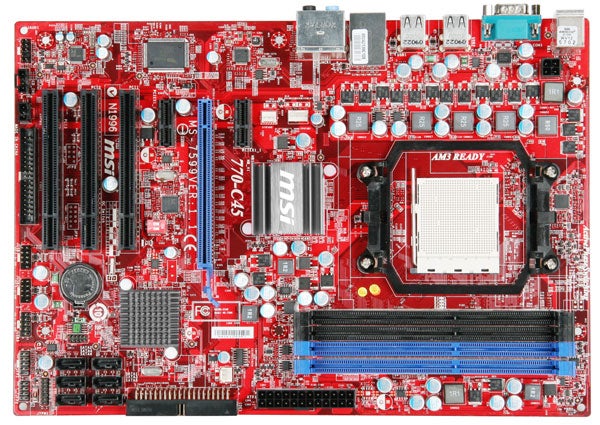 The passive cooler on the Northbridge is rather small and maintains a steady temperature of 60 degrees, which seems rather toasty. This is vexing as there is plenty of room to install a larger cooler and it would be awkward to rig up a case fan to keep the chipset cool. If you fancy giving it a try there are two spare fan headers on the board.


The combination of a relatively old chipset with a new processor socket isn’t quite as daft as it seems. We have no doubt there are people out there looking to upgrade their PC with a shiny and relatively cheap Phenom II who want to pay as little as possible for a motherboard. That’s fair enough, but even so we have no idea why MSI included a legacy Serial port on the I/O panel that looks totally incongruous next to the two PS/2 ports and we feel sure that the space would be better filled with two more USB ports.


The performance of the 770-C45 with a Phenom II 810 is perfectly decent at stock speed and matches any other AMD chipset on the market. You can bump up the speed of your DDR3 from the default speed of 1,066MHz to the full speed of 1,333MHz.


When you start to overclock you rapidly find the limits of the motherboard and chipset. For one thing the BIOS isn’t the most friendly example we have ever seen as it is easy to overshoot the voltage settings that you want and it is equally tricky to revert to Auto settings. We found that a base clock speed of 240MHz was the limit of the 770-C45, which is fairly feeble when the Asus M4A79T Deluxe will happily run at 260MHz and the Gigabyte GA-MA790FXT-UD5P roared along at 275MHz.

Both boards costs considerably more than the 770-C45, so if you are hoping you might pick up an overclocking champ for £53 you’d better think again. On the other hand if your overclocking ambitions are modest (or non-existent) you’ll be perfectly happy with the performance of the 770-C45.


It is clear that the 770-C45 is a very cheap motherboard. Indeed, the only comparable model on the market is the Gigabyte GA-MA770T-UD3P, which costs an extra £20, although it softens the blow by including eight USB ports and two Firewire ports.


The MSI 770-C45 is the cheapest motherboard we have seen that supports Socket AM3 Phenom II processors. It is incredibly basic, but despite that it does a competent job.