Call the cops, MotorStorm. Someone has stolen your thunder!


That someone is Black Rock Studios, whose quad-bike stunt-racing game, Pure, turned out to be one of the biggest and best surprises of the year. When the original MotorStorm emerged in Spring 2007, it felt unlike any other off-road racer you’d ever played, but after months of playing the original and coming so soon after Pure, Pacific Rift no longer seems so new or different or exciting. While the two games are hardly identical in terms of gameplay, there was a little of MotorStorm in Pure’s rocky tracks, vast jumps and gritty handling, and visually Black Rock’s game matches and even surpasses Pacific Rift in a few key areas. It’s possible to argue that Pure has made the MotorStorm sequel irrelevant. 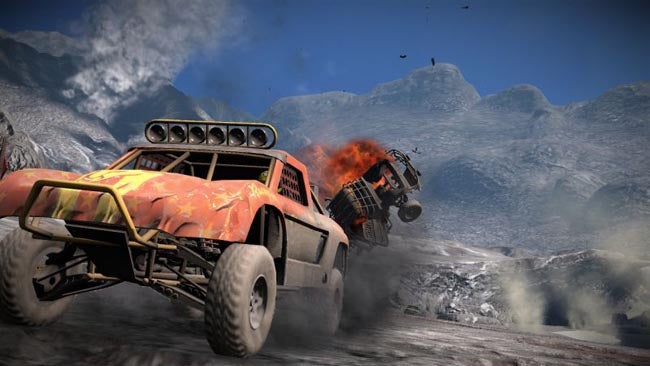 Possible, but neither fair nor true. Pacific Rift is everything a sequel should be, in that it takes an already great game, builds on its strengths and smooths out its weaknesses. Think of any major criticism of MotorStorm, and the new game does its best to fix it. Not enough variety in the Monument Valley tracks? A Pacific island setting with courses based around the four elements of fire, air, earth and water puts an end to that. Not enough content? Pacific Rift’s 16 tracks give you double what you had in the original game and more if you downloaded the additional four tracks supplied as download content later. No split-screen multiplayer? Pacific Rift supports two and four-player action on a single console. 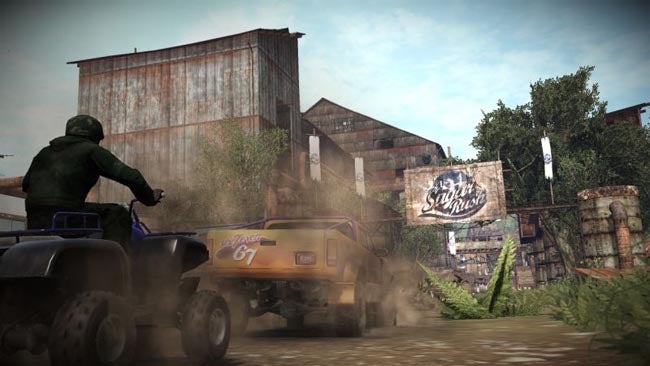 The shift of setting and the four-way division of events in the MotorStorm festival has allowed for some new track styles and a handful of new game mechanics to be reckoned with. As in MotorStorm, each event includes 16 vehicles, ranging from motorbikes to racing trucks to what we in good old Blighty would call lorries. Also as in MotorStorm, the key to getting anywhere is boost. At any time after an initial countdown you can press the X button to trigger a boost, but as you boost your engine builds up temperature. Build up too much, and it explodes. This means you need to use boost tactically, not just to catch up with the leaders or outpace the pack, but to manage certain jumps or provide extra thrust when taking the sharper corners. 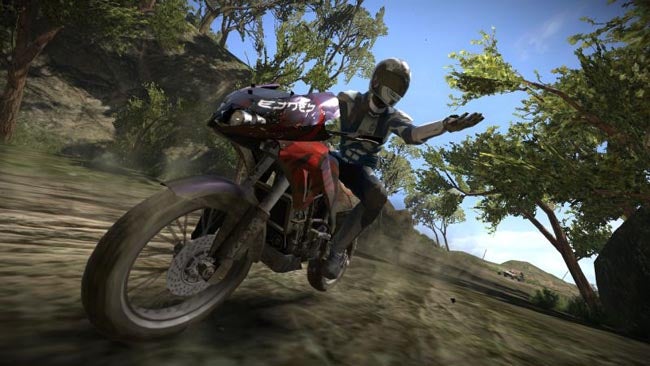 The two biggest changes in Pacific Rift are the introduction of lava and water to the tracks, mostly because of their effects on how you boost. Water cools down your engine, effectively freezing the temperature and enabling you to boost for free. However, get deeper in the water than your current vehicle can handle and you’ll fall out of the race, while lighter vehicles can also be pushed along by the game’s faster currents. Lava, meanwhile, speeds up the heat built-up in your engine and prevents it cooling down as rapidly, encouraging you to be careful with your boost and make full use of the sprinklers that the festival organizers have helpfully dotted around the tracks.

The 16 courses boast all the hallmarks of MotorStorm, offering difficult terrain, a range of different but intersecting routes, each suited to a particular class of vehicles, and plenty of points at which you can smash your car, truck or bike into smithereens or hurl it off a precipice. Part of the original’s fascination was that each track felt very different depending on which vehicle you were competing in, and the same holds true here. 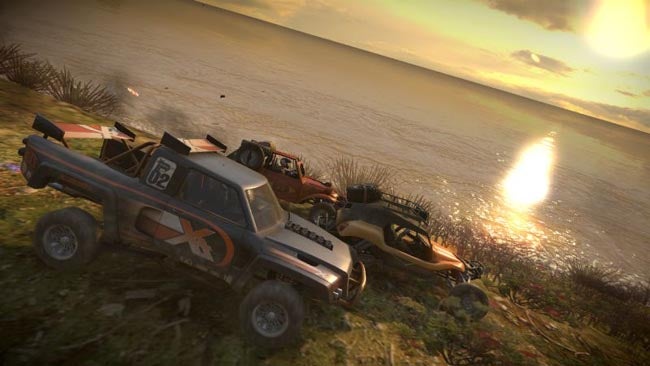 Some tracks contain deep, muddy gullies that spell trouble for the motorbikes and buggies but no fears for the larger, heavy-duty trucks known as ‘mudpluggers’ or the monstrous ‘big rigs.’ Meanwhile, narrow trails and epic jumps are meat and drink for the motorbike, ATV or buggy, but treacherous for anyone else. As a result, there’s rarely the same sense of boredom with the same old tracks that began to affect Pure after a while, because each event gives you a different vehicle choice and so a different experience.


Pacific Rift and boredom aren’t easily found together, anyway, for the simple reason that the excellent track design and fearsome handling practically staple your eyeballs to the screen. Evolution’s designers have taken the new elements of the volcanic island setting and ran with them, creating some incredible concoctions of waterfalls, jagged ridges, smoking lava pits and muddy creeks. One course, a white-knuckle route through the corrugated iron remains of a sugar factory, seems to have been designed to ensure that a split-second lapse of concentration will end in immediate disaster. 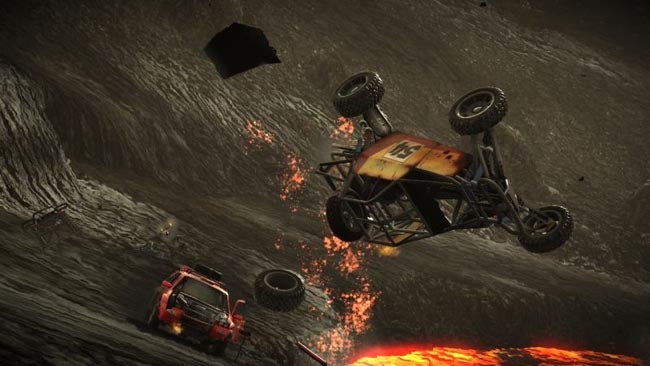 Others seem designed like thrill rides, with brilliant downhill stretches or spectacular jumps. The handling models, meanwhile, remain the benchmark for off-road racing games. The physics are exaggerated and the suspension impossibly tough, but there’s something about the way wheels and surfaces interact in the MotorStorm games that rival off-road racers can’t seem to match. When you land badly from a jump or hit a bump at speed you know about it, and the new support for the Dual Shock 3 controller – if you have one – only improves the feel. Pacific Rift remains, like MotorStorm before it, an incredible edge of the seat racer. 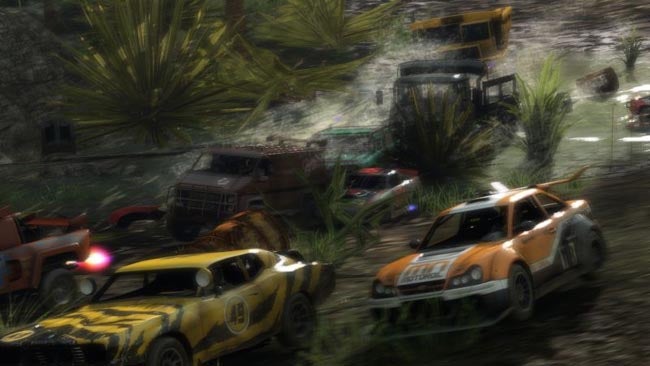 I suspect that the difficulty curve of the original has been softened slightly; few events in the early stages required the sort of practice that some of their equivalents in the first game demanded. If they do, however, it’s certainly not at the expense of the AI. As before, these guys are – to borrow from the elite ITV curse-word replacement squad – melon-farmers and air-heads to a man. If you’re on a bike and they’re in a truck, they’ll do their best to crush you against the nearest wall or shove you over the edge of a cliff.


Big vehicles will do their best to crush you, and one of the best things about driving a big rig is the knowledge that, as the 40-pound Gorilla of the tournament, you’re now the ‘messer’ and not the ‘messie’ should there be any ‘messing with’ to do. Sometimes the aggressiveness of the AI can be irritating, as when you’re about to finish first in a particular race and someone comes up fast from behind and knocks your back out on the final jump. Most of the time, however, it makes for a thrilling competition. If you don’t stay on your toes all the way through lap two, you can be sure that someone will be stamping on them soon.

The single-player campaign is still pretty simple – complete events to rank up and unlock more vehicles and events being the order of the day – but it’s a longer lasting affair this time around. Still, I think the real, long-term draw remains multiplayer. 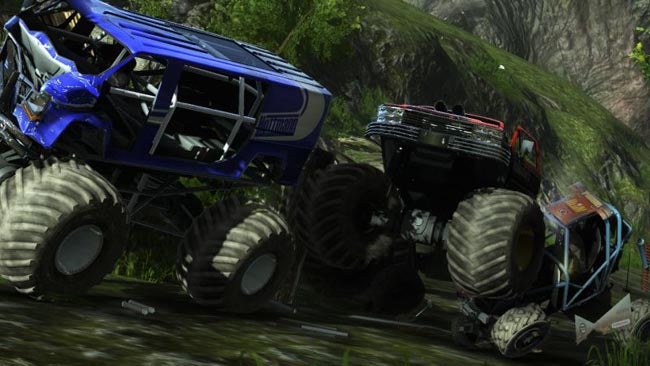 Online, Pacific Rift is hugely entertaining. With a packed grid of 12 racers and numerous opportunities for off-road carnage, it’s action-packed, unpredictable and the perfect antidote to some of the more sterile, technical driving simulations on the market, coming close to the testosterone-fuelled aggression of a good FPS. The good news is that the new split-screen mode carries this right into your living room. Up to four of you can play with eight or ten CPU drivers, and while there’s some loss of detail on the screen it’s not all that noticeable in the heat of mean-spirited, trash-talking competition. 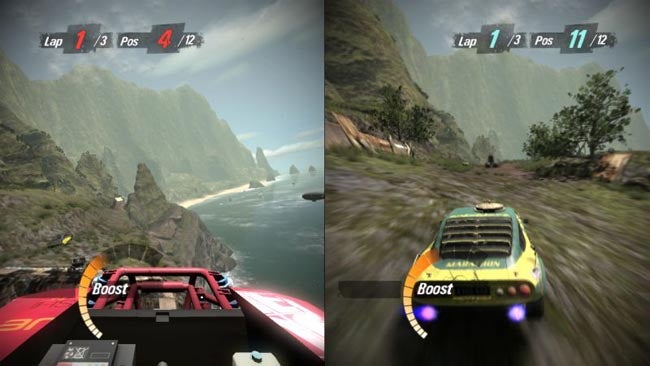 All in all, then, we’re talking about a solid improvement on the original. Why, then, is the score not even higher? Well, a couple of things still hold Pacific Rift back from being the all-time racing great I’d hoped for. For a start, the graphics, while never in anyway bad, aren’t consistently spectacular. Within the space of one course – the mostly gorgeous, waterfall-heavy Colossus Canyon – you’ll see some incredible vistas but also some ropey ground textures and unconvincing vegetation. It’s a game where, when the lifelike vehicle animation, rich lighting and strong environments come together, the overall effect is awesome, but there are isolated points where the result is curiously mediocre. 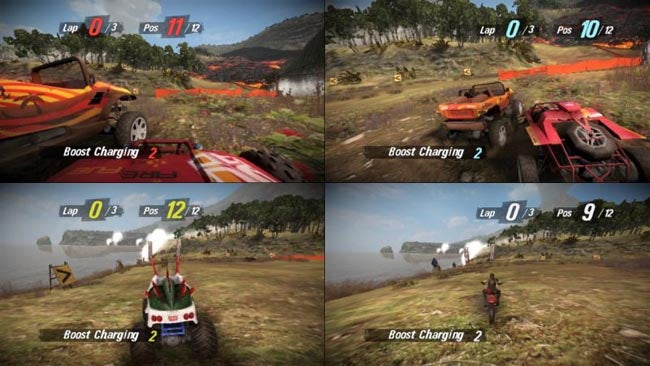 It also has to be said that it doesn’t feel quite enough of a progression from MotorStorm. The fire and water elements add a little, but the two new styles of event – basically checkpoint racing and Burnout-style elimination – don’t really work that brilliantly and the new vehicle class – the monster truck – feels less than essential. If you enjoyed the basic Motorstorm experience you’ll enjoy this, but if you’re expecting some great new twist, you may go away feeling mildly – and only mildly – disappointed.


Still, I really don’t want to end this review on a negative note, because while Pacific Rift isn’t quite everything I might have hoped for, it’s still a great off-road racer and in many ways a stronger game long-term than Pure. It might not have that title’s exhilarating, stunt-pulling showboating, but for handling, AI competition, variety and – most of all, raw thrills, the new MotorStorm has the edge. Even if it’s lost its thunder, it’s still packing plenty of punch.


While not a vast step on from MotorStorm, Pacific Rift improves on it in all the most important ways. With more variety and better multiplayer modes than Pure, it’s a strong contender for the off-road racing crown.