To borrow from Jane Austen, it is a truth universally acknowledged that a new console in possession of ground-breaking hardware must be in want of a killer game to show it off. This game doesn’t need to be perfect, nor does it need to be revolutionary (though in some cases both are true). It simply has to show the potential of the new machine, and make anyone who sees it or plays it want to buy one. The original Playstation had Ridge Racer, the Nintendo 64 had Mario. The Xbox had Halo, the 360, Call of Duty 2 and Project Gotham 3, and the Wii had Wii Sports (and to a lesser extent, Zelda). The Playstation 3 has several contenders, but only one with the impact and appeal to do the job. Unless you’re a) blind or b) completely and utterly adverse to racing games of any form, Motorstorm will make you want a PS3. 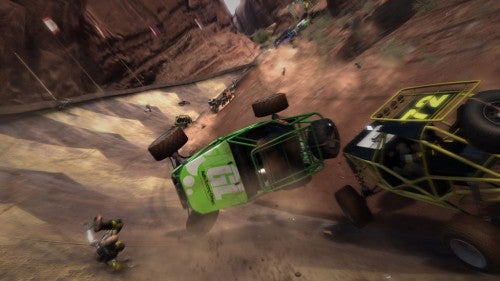 It’s not hard to see why it makes such a big first impression. Look at the screenshots accompanying this review, then imagine them moving at 30/60 frames per second at 720p, with nary a hint of slowdown (well, almost. A few of the grabs look a little like manipulated publicity shots to my trained eye). I’ll try to restrain myself from waxing lyrical about Motorstorm’s good looks, except to say that its combination of Havok’s physics engine, some ludicrously detailed vehicle models and every next-generation lighting, blur and haze effect is utterly breathtaking. Frankly, you need to be watching someone else play or enjoying a replay to appreciate it in all its glory; to revel in the way the setting sun glints off your ATV as you come over a ridge; to see the suspension work beneath the chassis of a fat-wheeled ‘mud-plugger’; to note the way your driver pumps his arm in victory as he crosses the finish line first. So what if the reality of Motorstorm comes several hair’s breadth away from the Sony’s controversial pre-rendered, ‘vision’? It’s staggering stuff nonetheless. 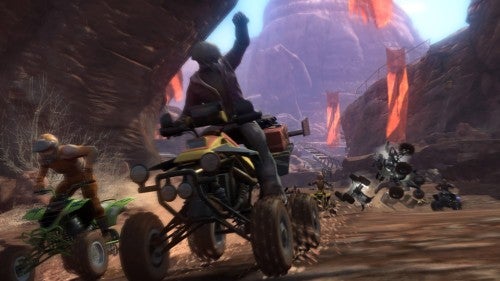 Borrowing Burnout’s slow-mo crash camera certainly helps. There’s nothing like the realisation that the disastrous collision of your ATV with rough ground has actually thrown your rider into the arms of the bike-rider behind, who struggles with the extra weight and loses balance, crashing into an outcropping only fractions of a second later. If that sort of detail doesn’t make your jaw drop, nothing will.


Perhaps what impresses most is that Evolution’s engine manages all this when there is a hell of a lot going on on-screen at any one time. Most racing games only feature one type of vehicle, and even multi-vehicle games like TOCA3 ensure that there’s only one type on track at one time. Many racing games can only manage a handful of racers at a time. Motorstorm’s first stroke of genius is to take ten or more vehicles of various types, throw the whole lot on at once and see what happens. Races pitch dirt-bikes against ATVs against monster trucks against lightweight buggies against monstrous big rigs against rally cars. Some events restrict the competition to a single vehicle class, but most just bung a selection on, seemingly willy-nilly (though usually with an aim to test a particular set of driving skills). The result is a wonderful kind of carnage. Each and every race is a real second-by-second adventure. While you might relish the speed and maneuverability of your two-wheeled racer, it doesn’t half leave you feeling vulnerable when a vast eight-wheeler is roaring up behind you, and while the monster truck feels more secure, you can’t help envying the two-wheelers scrambling onto higher ground and speeding into the distance. 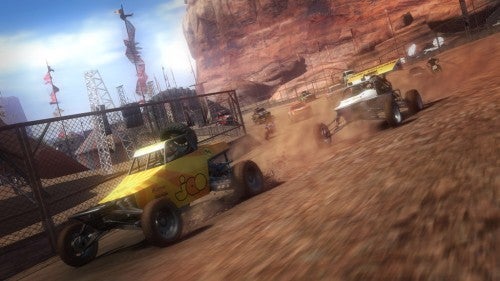 Cleverly, the various drivers and riders have been coded to react to the vehicles around them, so riders will push against encroaching larger vehicles in a desperate bid to create some room, while larger trucks will mercilessly shunt smaller vehicles in an effort to force them off the track – particularly galling when that track is several thousand feet above the next adjacent horizontal surface. 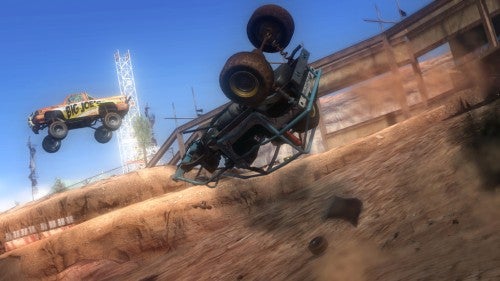 The tracks, meanwhile, are wonderful examples of great game design at work. Other games throw in a selection of shortcuts and alternative routes, but in Motorstorm most tracks feature two or three constantly intertwining main routes on different surfaces and elevations. While the agile bikes and ATVs are hopping from ramp to rock to ramp, the rigs and mud pluggers might be churning it up in the gooey mud below. The game’s monument valley setting ensures a single look and feel – just steering clear of the risk of monotony – but the tracks manage to crowbar in variety through altitude, weather and ground conditions. Racing around the dizzying heights of the Rain God Mesa, clinging to the edge of a horrifyingly vertiginous curve then leaping over a fearsome gap is one thing; speeding through the tight formations and fierce outcroppings of The Tenderizer quite another. And as different events place you in particular vehicles, it’s rare to find the action repetitive even when you’re returning to the same track for the umpteenth time. Think the mesas, cliffs and gulches of Rockhopper are scary on a bike? Now try them while bouncing around on a highly-sprung ATV. 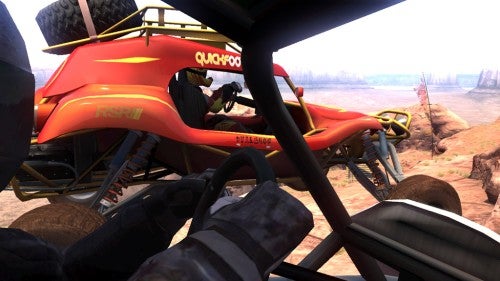 Unsurprisingly from the team behind the WRC Rally series, each vehicle drives very differently, and while the handling is more stylized than realistic, Motorstorm really makes you feel the complex interaction of tyre, surface and suspension at work. It does take getting used to, however, and it might be a few tries before you realise that, while steering, accelerating and breaking are important, the key to mastering Motorstorm is boost. Boost is always available, but as using it too much causes your vehicle to overheat and blow up, you’re discouraged from too regular use. Instead, boost is best reserved for short stints of acceleration, to shoot you around tight corners when your back is drifting out, or to keep you on the track when you’re about to skid off into disaster. Boost skill is to Motorstorm what the air-brake was to Wipeout.


With this lesson learnt, Motorstorm establishes a well-thought difficulty curve. The game is themed around a fictional Monument Valley festival, with the competition divided into 21 tickets, each comprising from one to four events. A few of these can be completed on the first try – you only have to get third place to qualify for the next – but most will take a little practice before you hit the zone and everything clicks. Yes, there is some evidence of rubber-banding, and while the game’s tendency to pack racers together and set opponent AI to nuttily aggressive ensures the action stays frenetic, it also means that a single mistake can see your racer drift from pole position to last position in seconds. On the other hand, clawing your way back up can be a surprisingly speedy process if you take the right routes and think on your feet, so the pros and cons balance themselves out. 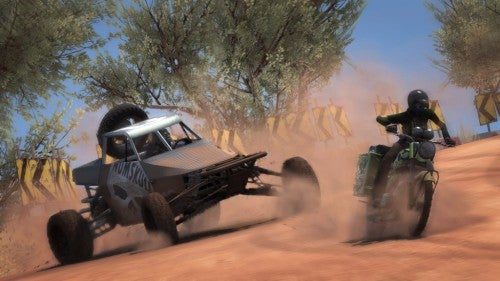 During development much was made of the technology being used to make tyres churn up mud and wreck the surface for rival racers, and I can’t help feeling that the reality here doesn’t quite live up to the hype. The interactivity between vehicles and courses is impressive – at one point I suddenly found the bike I was racing vaulting into the air after a truck driver’s error had turned a barrier into a makeshift ramp – but you never get the sense that your mud-splattering antics are leaving a tricky surface in your wake. What’s more, it’s clear that the swathes of mud left behind are simply flat-looking shader effects, not deformations in the terrain. It’s still great to look at, but not quite as astonishing an effect as we were initially led to believe. 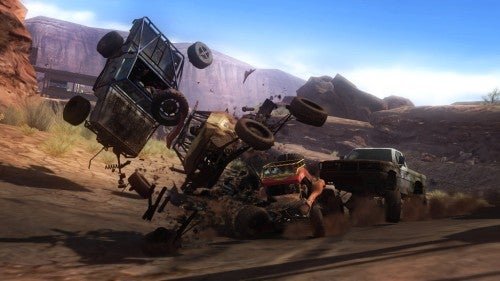 That said, this is a storming launch title for Sony’s new baby. In the heat of the action, the thunderous rock and techno soundtrack blaring out, you’re not thinking about broken promises, excessive price points or all the media hype and bluster that has surrounded this most controversial of recent console launches – you’re just enjoying one of the most adrenalised racing games you’ve ever played. Think Colin McRae 4 meets Burnout 3 and you’re probably thinking vaguely along the right lines. Motorstorm is a game that grips like there’s no tomorrow. I’m horribly, horribly tempted to dish out a nine in the box at the top of the page, and the only reason I haven’t is that I’m not sure that, with what’s still only a handful of courses, Motorstorm will have the staying power to match a Gran Turismo, a Burnout 3 or a Colin McRae (though the inclusion of online play in the European version certainly help. Sadly, the server wasn’t up and running at the time of writing). Still, as long as it lasts it’s an absolute blast. Were the PS3 slightly cheaper, Motorstorm would shift it like hot cakes. Even with things as they are, I suspect that – for some of us – it will instantly justify the expense.


The jewel of the PS3 launch line-up, and one of those titles any self-respecting gamer will lust after, even if they can’t bring themselves to admit it. Eventually the thrill may fade, but it’s hard to imagine a more exciting off-road racer. 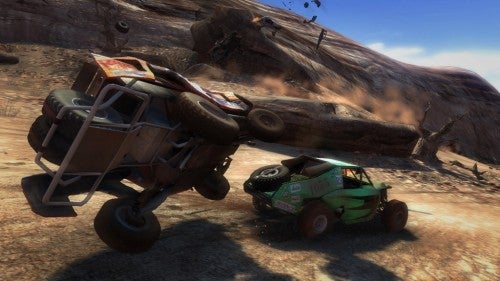