With it now being owned by Google, Motorola should by rights be leading the charge when it comes to Android devices, but its Xoom and https://www.trustedreviews.com/motorola-xoom-2_Laptop_review Xoom 2 tablets and many of its Droid phones have struggled in the wake of both the competition from Apple and other manufacturers churning out Android hardware. However, the Xoom 2 Media Edition could well be the device that finally pushes the company to the forefront. Contrary to what you might expect, though, the Xoom 2 Media Edition doesn’t impress with any particular feature, rather it just gets the basics right.

First among its achievements is simple styling and good build quality. The front is a totally unbroken slab of glass while the back sports a brushed metal plate in the centre and soft touch plastic edges. The combination looks and feels premium and is comfortable to hold. The corners have also been clipped, like on the large Xoom 2. It’s an intriguing design motif but one we think works reasonably well, and certainly doesn’t detract from the overall look, even if it has little practical benefit. 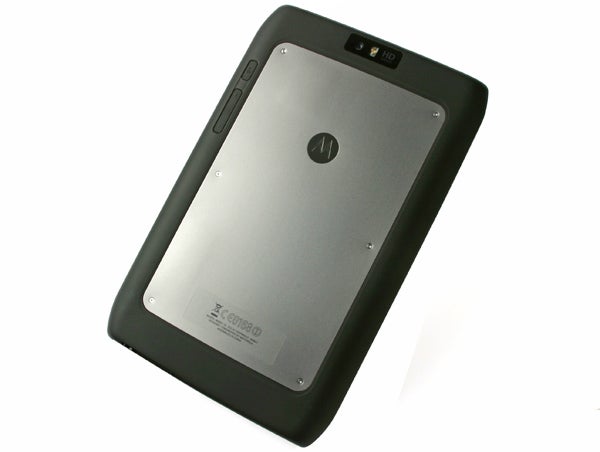 Most notably, though, the smaller size of this tablet means it’s both more portable than larger tablets (216 x 139 x 9 mm vs ~240 x 190 x 9mm), lighter (386g vs ~550g) and easier to hold. This isn’t just because it’s lighter and less top heavy but also those with largish hands can easily wrap there hand round both sides, giving a really secure grip – it really does make a difference if you have any intention of using your tablet regularly when travelling. It also highlights why the Asus Transformer has been such a success, as those larger tablets are much closer to bordering with laptops so people want to use them that way. 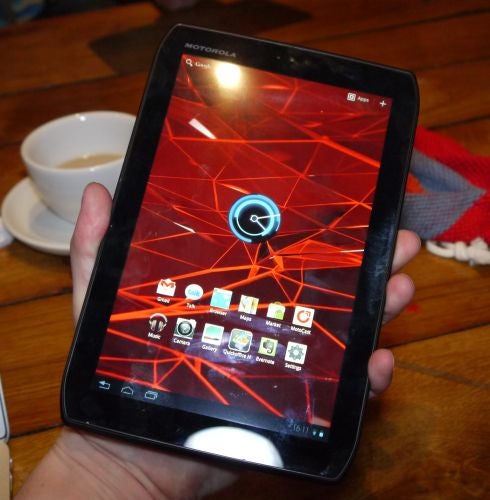 As with the 10in Xoom 2, the Media Edition has its buttons mounted on the back, rather than the side. We quite liked the idea of this at first as it further aids the tablets clean lines when viewed from the front and they theoretically fall easily under your fingers when holding the tablet normally. However, in practice they’re difficult to locate and press without looking at what you’re doing – a small but constant irritation.

Another missed trick is the lack of a microSD or SIM slots, so you can neither expand the internal storage nor add 3G. The latter is more common but the former is something of a let down especially as there’s only 16GB (14GB of which is accessible) built in. it’s enough to load the tablet with plenty enough videos to last a long haul flight, enough apps and games to keep you entertained for 100s of hours, and as many ebooks as you could read in a lifetime, but if you do have an extensive mp3 collection as well, you’ll soon start to run out.

Perhaps what’s most annoying is the plastic flap that would otherwise cover where these cards go is still there – lift it aside and you’re met with cold hard nothingness. It’s actually annoyingly sloppy to be frank.

However, on every other hardware front this tablet holds up well. On the
back is a competent 5 megapixel camera with LED flash (samples below).
There’s a better than average front facing camera (samples also below)
and connectivity wise, it’s pretty good too. Up top is the obligatory
headphone jack and alongside it is an IR transmitter. This you can use
with apps such as the included Dijit to control your AV devices – a task
it performs rather well. A few other tablets including the Sony Tablet S
also include IR transmitters but for the most part they’re still quite
rare.

Running along the bottom edge are sockets for microUSB and microHDMI
which can be used to connect the tablet to a computer (or its charger)
for charging or data transfer and hooking up to a TV, respectively. With
the HDMI connected, the display will simply mirror whatever’s on the
tablet, or in the case of video playback, will actually play it at the
TVs full resolution, assuming your clip is high enough resolution. Video
playback is very good, with Android’s DICE player – available free from
the MarketPlace – able to take advantage of the tablet’s inbuilt video
decoders for smooth playback of just about any format and file size you
care to name. 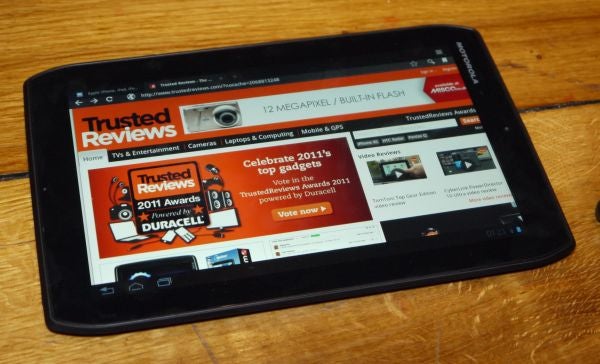 Key to the appeal of the Motorola Xoom 2 Media Edition is its screen.
Despite being smaller in size than the Xoom 2, the Media Edition retains
the same number of pixels (1,280 x 800), making it look noticeably
sharper than all larger tablets currently available – it actually has a
higher resolution than the 9.7in iPad. The benefits of this are
literally clear, as text, pictures, games and videos all look smoother
and less blocky.

The display isn’t as vivid and high contrast as AMOLED ones but is on
par with most competing tablets with LCD panels – viewing angles are
good and colours reasonably rich. Max brightness isn’t outstanding but
is certainly sufficient for all but the brightest of days. Only a little
bit of backlight bleed lets things down (which you’ll notice when
watching dark scenes in videos) but this really isn’t enough to put us
off. 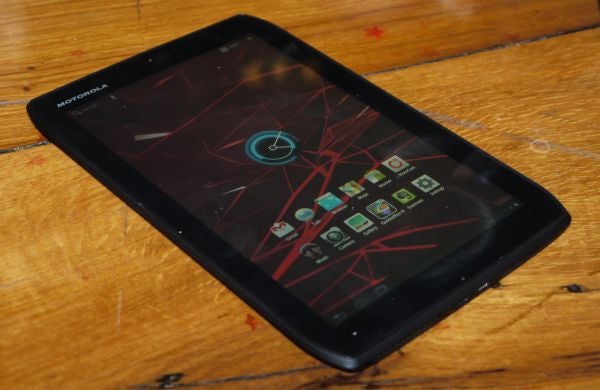 Overall performance is also good, though the limitations of Android are
on show here. It runs a Texas Instruments OMAP 4 processor, which is a
dual core chip running at 1.2GHz, and this is accompanied by 1GB of RAM.
Opening and switching between apps is fast, while challenges like
graphically intensive websites and the latest games are dealt with
easily. Only the perennial toughy of Flash-heavy websites causes much in
the way of slow down, though fullscreen flash video playback is
generally smooth. The latest 3D games such as Dungeon Defenders also run
smoothly.

However, when it comes to simple moving and scrolling around the
interface, there’s a noticeable gulf between this and the new generation
of tablets running the next gen chips, i.e. the Asus Transformer Prime,
with its quad-core Tegra 3 chip. Also Android still lacks the fluidity
of iOS. You can still get stuff done easily and quickly but it just
doesn’t feel as satisfyingly tactile. Typing, rather strangely, can be
slow and laggy too. 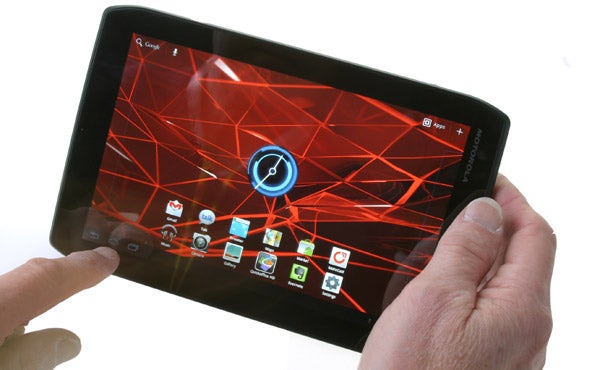 Another area of performance that is so so is battery life. Being a
smaller tablet, it can only fit in a smaller 3,900mAh battery compared
to the ~6,000mAh units on large models. The result is around 6-7 hours
in sustained use compared to around 10 for the likes of the iPad 2.
Nonethless, this is plenty for a weeks commuting, and a fair chunk of
most long haul flights.

Otherwise, we’re talking about a fairly standard Android tablet.
Motorola has made no changes to the interface and just added a couple of
enterprise level apps; a citrix client (Citrix), a remote meeting tool
(GoToMeeting) and a productivity suite (QuickOfficeHD). All are
available separately on the app store though. 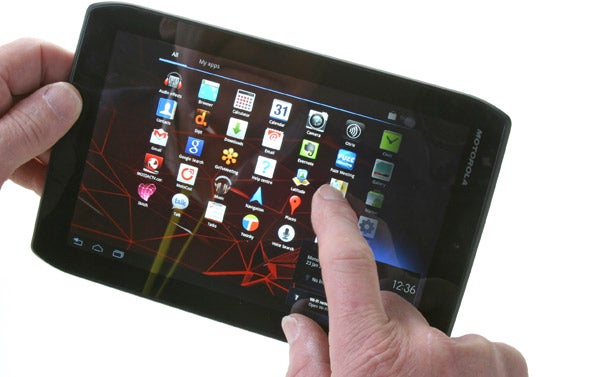 The only really notable addition is MotoCast, and ironically this is
actually another of Motorola’s slip ups. The app itself is fine,
allowing you to setup your computer and tablet so that you can stream
your media from one to the other from anywhere round the world –
assuming you keep your computer on. However, Motorola has made it so
that you’re required to install MotoCast to access the tablet’s onboard
storage. Not a big problem for your home PC, but when one of the great
advantages of Android tablets is that you can simply plug them into any
computer to swap files around, it’s a bit of a pain that on this model
you have to install something. 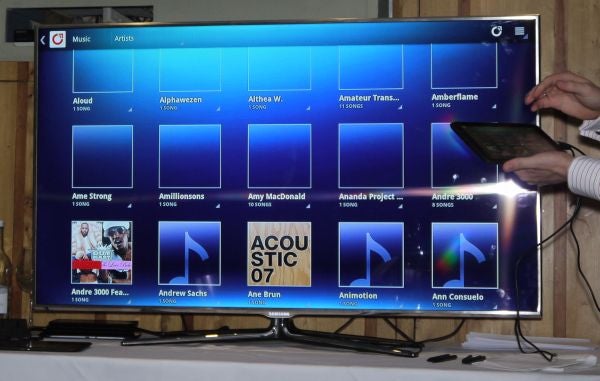 MotoCast can be used when connecting the Xoom 2 Media Edition to a TV, making for a really nice media browsing interface.


This aside, the Xoom 2 Media Edition offers a lot once you’ve set it up
how you like and packed it full of your favourite apps. Android tablets
still trail iPad for the sheer breadth and quality of apps on offer but
the tide is starting to turn now that Android is becoming so ubiquitous.
Some of our favourties such as Dropbox, Fieldrunners, Spotify,
SketchBook, Skype, StumbleUpon and the Times all now have apps. That
said, official apps for Toodledo, Cover Orange, and Monkey Island are
still lacking. 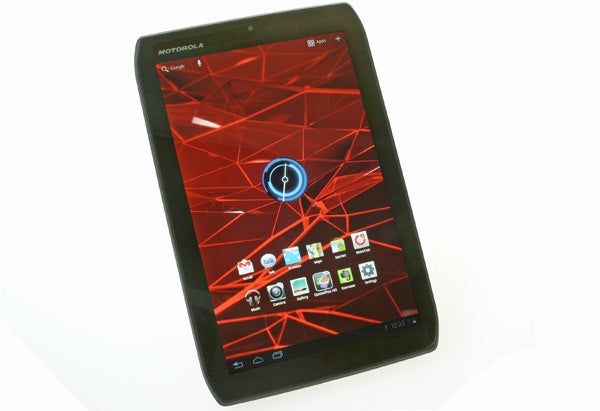 So essentially, you’re looking at a choice between better core
functionality than an iPad (better camera, IR transmitter, better video
playback, Flash enabled web browser) vs the iPad’s continued app
dominance. When it comes to other Android tabs, though, the Xoom 2 Media
Edition holds up well. Costing ~£330, this tablet is fairly
competitively priced, though not enough to be truly compelling. Neither
bargain nor bank buster. It is, however, the best small tablet currently
available.

The Xoom 2 Media Edition doesn’t completely win us over thanks to a few
sloppy design decisions, a lack of 3G option, no expandable memory and
Android’s continued lack of apps. However, the core features on offer
are compelling, with an IR transmitter for controlling your telly, a
high res screen, a couple of decent cameras and solid performance. Most
of all, though, we simply like that this tablet offers all the power of a
larger tablet in a smaller, more portable form factor, and does so at a
competitive price.