Motorola’s mobile phones division is in a bit of trouble at the moment having been hived off as a separate business and suffered the indignity of a very public lambasting. The company can only remain a serious player if it produces handsets that people want to buy. With that in mind, what do we make of the U9? 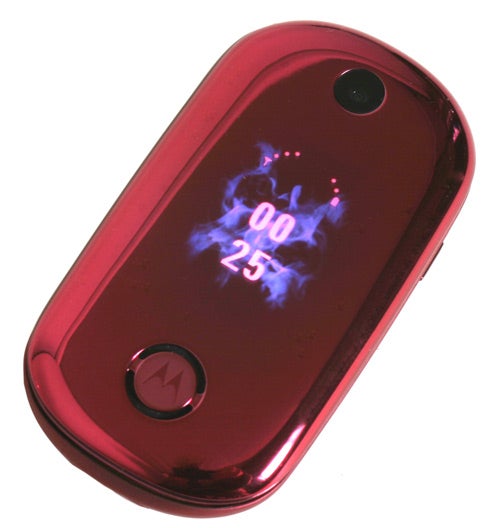 This is a quad-band clamshell phone and it comes in pink and purple. I feel duty bound to explain that Moto suggests this is a handset for the ladies and offers an inane quiz to help you decide which colour suits you. If you are Barbie-like and/or dim enough to think you need a quiz to decide what colour phone suits you, then try it here. Motorola really should have more sense than to try such a patronising marketing effort.


Anyway, I got the purple version, the PRs having cleverly picked up on my dislike of pink. The phone is Christmas-decoration shiny all over the front and rubbery on the back. The visual design is distinctly PEBL making it two years old in concept.


Despite the design’s age I can’t really fault Motorola on the rounded ‘bar of soap’ style shape. It means the U9 feels as comfy in the hand as the PEBL ever did. And dimensions-wise you are looking at a pocket-friendly 90mm x 49mm x 16mm that weighs a reasonable 87g.

And there is something very new to this mobile – its outer OLED display. Now, OLED displays should not be new to regular readers, but Motorola has done something rather clever with its implementation. The front OLED sits under the outer shell and you’d never know there was a front screen at all when it’s not active. When it is, its 128 x 160 pixels provide information in a way that dominates the front of the phone. Moreover there is a touch-responsive element.


When playing music, for example, the screen displays track info for a few seconds and then turns itself off. You can reactivate it by touching the front screen, and this could be handy because there are touch controls for forward, back and pause/play. 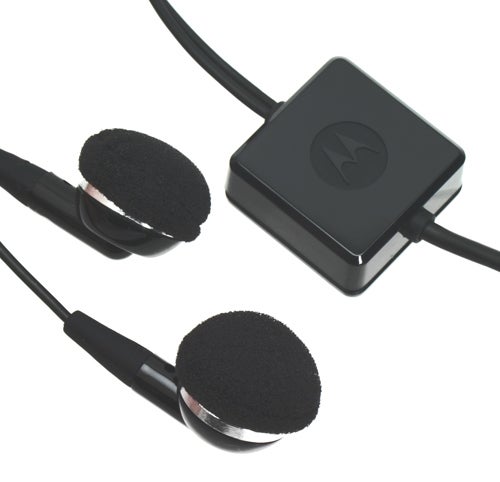 When a call comes in the OLED pops up and tells you who is making contact. When nothing much is going on you can tap the volume rocker and change profiles.


When someone sends you an SMS the OLED alerts you. It can display the message and you can send a quick reply using a combination of the left side volume rocker and select key. There are various predefined texts and you can add more. It is a bit of a fiddly system, especially as you need to unlock the side keys before using them, but it could come in handy.

Open the flip and you are greeted by a 2in, 320 x 240 pixel, 262 thousand colour TFT LCD which is amazingly sharp and bright, and a retro flat number pad. There is nothing remarkable about the number pad though it does have a key dedicated to launching the music library. 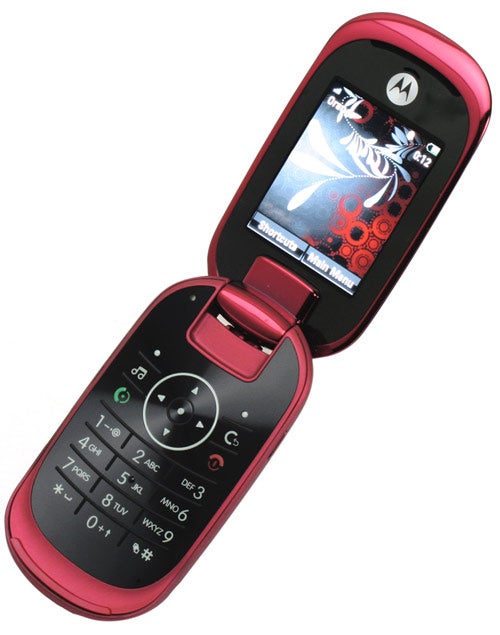 Which brings me on to the phone’s features, and I’ll start with music. The formats supported are a standard bunch – MP3, WMA, AAC and AAC+ among them.


The phone’s memory card will sync with a PC. There is a microSD card slot under the battery cover where it is as difficult to get at as it could possibly be. Moto says cards of up to 4GB in size are supported, which must mean SDHC is supported. You can’t send music to the internal memory, but with just 256MB built in the absence of this ability is not going to worry you too much.

You can use Bluetooth stereo headphones or the set supplied by Motorola which, irritatingly, use a proprietary connector and are one-piece i.e. there is no way of using a headset with a 3.5mm jack.


My battery test indicates that this is not the ideal phone for music lovers. From a full charge it gave me 4 hours 47 minutes of continuous tunes through its loudspeaker, which is hardly record breaking.

There is a camera which shoots stills at resolutions up to 2-megapixels. The lens is on the front of the flip and with the phone closed you can use the OLED as a viewfinder to frame photos of yourself shooting with a side button. You can zoom using the volume rocker but can’t access any other settings.


With the flip open you shoot facing away from yourself and use the main screen as the viewfinder. Now you can get to the camera’s settings using the up and down controls on the navigation button to choose the type of setting (zoom, scene, exposure, lighting conditions etc) and then the left and right buttons to make selections. This system makes it really fast and easy to make changes.

The camera can be best described as average, and that may be doing it a kindness. Certainly my test shots, as usual taken with the camera on auto settings, did not perform wonderfully.


The coloured dish, photographed indoors under normal household lighting conditions is rather dark and grainy. The chair, which has become my standard outdoor shot, shows variation in its white tones and definition is not what it could be. The white flowers fare better, with an acceptable level of detail as far as camera phones go and less over-exposure than I had anticipated. All the test images, however, appear to suffer from a spurious colour shift at the centre of each exposure. Odd. 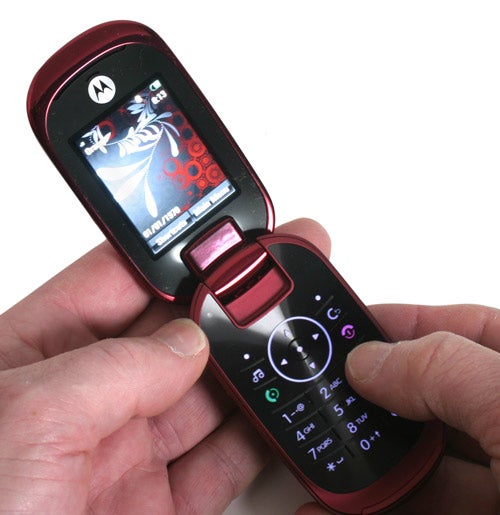 Interestingly you can set the phone to automatically send all photos to a list of contacts you specify. Not sure that is a good idea, really, but there you are.


As well as voice dialling you can set up a talking phone system where the phone reads stuff out to you such as the caller ID and content of incoming texts and emails. The voice used is rather more human than some, but making the setting is fiddly enough that you may not bother with it.


Yes, there is mobile email support, and there is an HTML Web browser which, frankly, I’d steer clear of on a quad-band phone with a 2in screen. There is a calendar, to do list, three alarms, world clock, calculator, and notepad too.


So has Moto done enough with the U9 in view of its present difficulties? Well, the front OLED display is distinctive, the shaping is old-hat but remains attractive, and there is a reasonable array of software on board. Other mid-range mobiles do have better battery life, though, and I think a company with such a good past design pedigree could have done better. 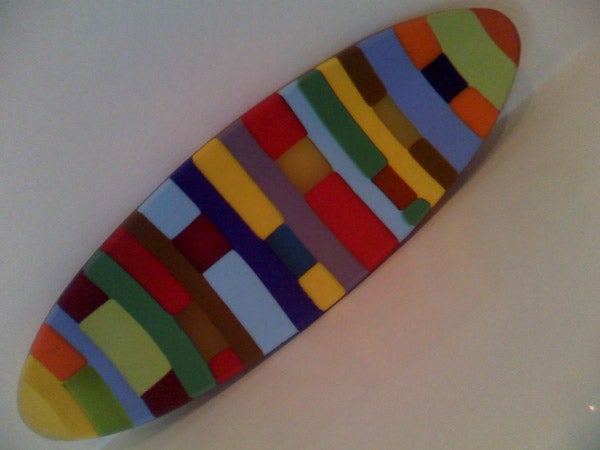 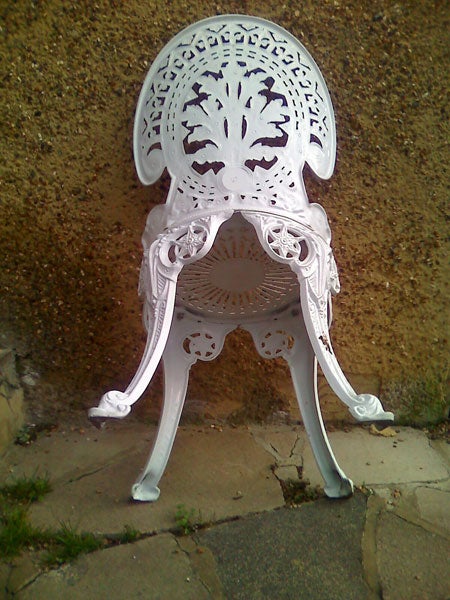 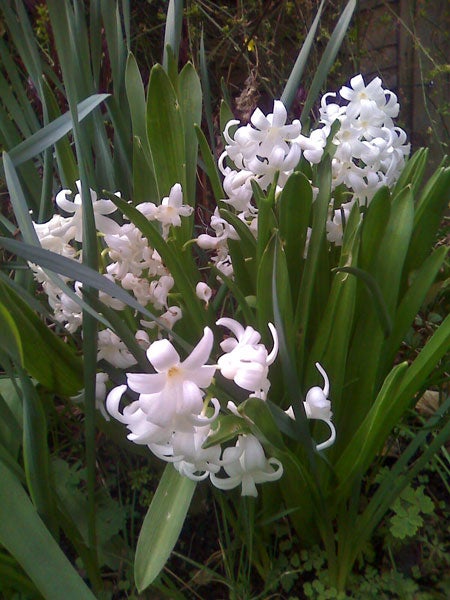