The Motorola Razr HD runs on Android 4.1, which is a relief as the phone was saddled with the older 4.0 version of Android when it was initially released in the US. Thankfully Motorola has backed away from adding too many unnecessary extras over the top of the vanilla Android interface. Nevertheless, there are a few tweaks here and there. For example, swiping right from the homescreen takes you to a ‘quick settings’ page where you can turn on and off stuff like Flight Mode, Wi-Fi, Bluetooth and GPS. 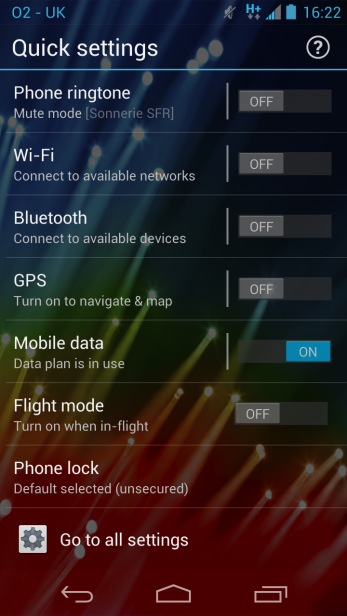 Also, pressing the home button while you’re on the homescreen brings up a thumbnail view of your various homescreens to allow you to reorder them via drag and drop. The company has also added a few handy widgets, including a cool Circles widget that shows time, weather and battery life on a series of interconnected rings. The cool bit is that these rings can be flipped. For example, if you flip the weather ring it displays the weather in another city while flipping the battery ring gives you one tap access to the settings menu. 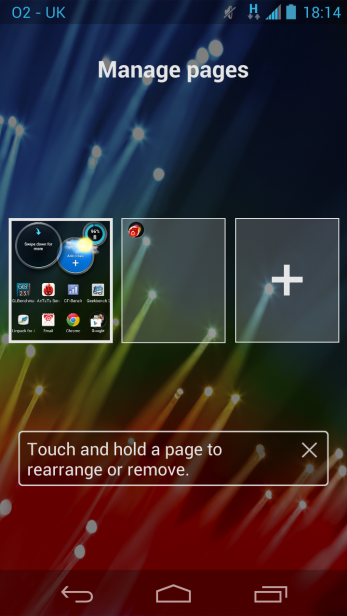 Motorola’s SmartActions app is another neat extra. It lets you to set up a series of rules that will cause your phone to perform actions. For example, you can set the phone up so that when it’s on charge the screen automatically goes to maximum brightness and it updates background data all the time. Alternatively, you can set up a rule for your car so that when the phone is paired with a Bluetooth device (a speakerphone, for example) it’ll launch the Vehicle Mode app and turn on GPS. There are a lot of different rules and actions you can configure, so it’s a very flexible system and one that can be quite useful as long as you’re willing to spend a bit of time setting up the different triggers and actions.

The Razr HD runs on a dual core 1.5Ghz Snap Dragon S4 chip, rather than the quad core processor you get on most of today’s higher-end handsets. Nevertheless, it does have a healthy 1GB of Ram. There’s 16GB of internal storage too, although you can bump this up to 32GB via microSD card.  On the connectivity front the Razr HD offers built-in NFC and also support for LTE for 4G data speeds.

While the Razr HD might ‘only’ have a dual core chip, the S4 processor is certainly no slouch when it comes to performance. It completed the Sunspider web browser test in 1418.7ms, which compares favourably against the Galaxy S3, which finished it in 1956ms (lower is better). 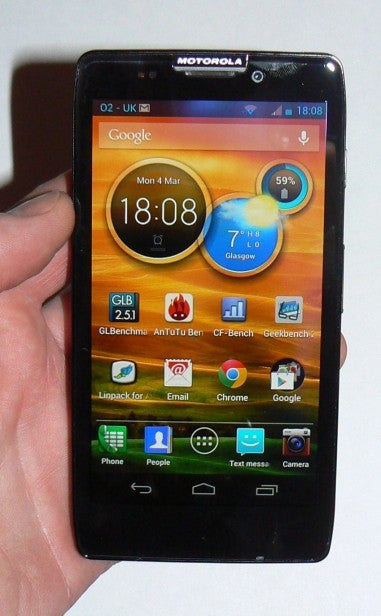 It’s fast for gaming too, clocking up 51fps in the GLBenchmark Egyptian Classic test. In comparison, the quad core HTC One X only slightly outscored it by hitting 53fps. The Razr HD was also very impressive in Linpack; its score of 245.155 way outclassed the HTC One X, which posted a result of 161.558Mflops (higher is better). However, it falls behind the One X in CF-Bench and Geekbench, with the One X posting scores of 14429 and 1533 respectively compared to the Razr HD’s results of 7514 and 1412.

Motorola’s Android handsets have developed a bit of a reputation for good battery life and thankfully the Razr HD continues this trend. The handset has a much larger battery capacity than its competitors. At 2530mAh, its battery is even bigger than the beefed up 2,100mAh capacity battery HTC added to it re-jigged One X. This really does help to give it much better stamina than the competition, as on a normal day we found it would usually end up with 50 to 60 per cent of the battery remaining, which was very impressive. Phonecall quality is also very strong, with the Razr HD doing a good job of holding onto weak signals. 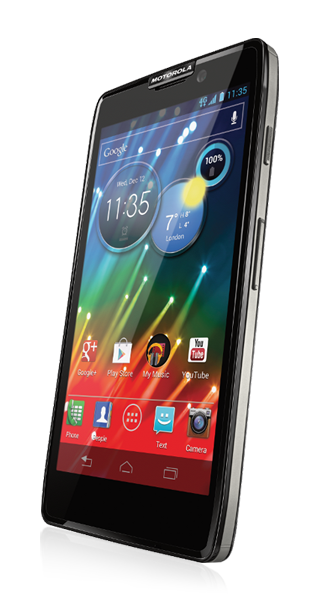 The Razr HD has an 8.0-megapixel main camera on the rear, which is helped along by a single LED flash. There’s also a secondary 1.3-megaixel camera on the front for video calling in apps like Skype. We’d say the camera is above average, but not quite up there with the cameras on the iPhone 5 and Galaxy SIII.

This is not because it doesn’t take good photos, but more because it makes you work harder to get good results. Its autofocus can be a little wayward when light levels diminish and it doesn’t always do a good job of capturing scenes with high contrast levels, such as a bright sky against a shadier foreground. You often have to fiddle with the controls to get better results. Sometimes it does help you out by suggesting that it should turn on HDR mode, but then like a lot of Android phones using HDR introduces a fair bit of extra shutter lag. 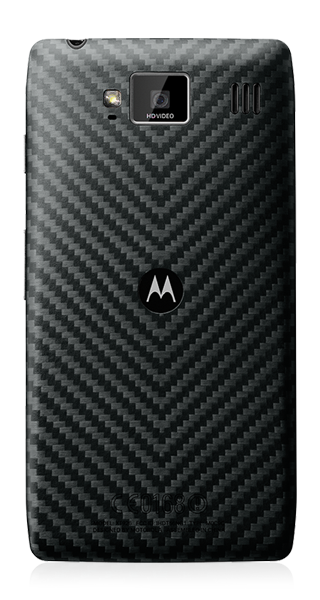 The phone can also be used to capture 1080p video, though. If you keep the camera still and there isn’t; a huge amount of motion in the frame detail levels are actually pretty good, but as soon as you try to do a reasonably speedy camera pan frame rates and detail levels drop off significantly. This is something that affects most of the 1080p video modes on today’s smartphones, so the Razr HD is far from alone in having this flaw.

On paper the Razr HD may not look all that tempting given its fairly modest spec. However, in the flesh it’s an attractive looking phone that feels more robust than the likes of the Samsung S3. It’s got surprisingly good performance for a dual core phone too, along with excellent battery life. We think it’s a strong contender if you’re looking for a 4G handset, although we can’t help but feel that it’s soon going to be swamped by a lot of higher spec handsets from other manufacturers that will be available for a similar asking price.