Even aside from the ever popular BlackBerry, which for many people is the defining device in this category, the Windows Mobile Smartphone is a pretty crowded market so Motorola’s Q9 has a lot to contend with.


As I write this review the phone has gone on sale in Italy and is fully expected that it will appear in the UK pretty soon. At the moment though, we don’t have confirmation of pricing or any information about which operators might take it on.


It is more than likely it will find a home here though, as it has some enticing specifications. It runs Windows Mobile 6 and is Quad-band with HSDPA at up to 3.6Mbps. You won’t find a UK operator offering more than 1.8Mbps at the moment, but there’s nothing like a bit of future-proofing, is there? It has 96MB of RAM and 256MB of internal storage memory and a microSD card slot is on the upper left edge of the casing. A 2-megapixel camera with flash caters for shooting photos and video, the latter at 30 frames a second. Very annoyingly given that little list, there is Bluetooth but no Wi-Fi.


This is a pretty big smartphone. It weighs 134g, which considering you can get Smartphones weighing around the hundred gram mark is a bit heavy. In the accompanying paperwork, the Q9 Motorola only divulged the thickness of this device, all 11.8mm of it. My trusty ruler came up with a height measurement of 117mm and width of 67mm. 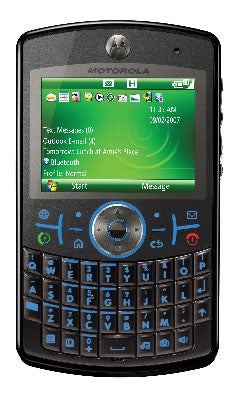 Compare all these dimensions to those of the recently reviewed Samsung SGH-i600 and the Samsung wins on almost every count.


Of course it isn’t just about size. A keyboarded Windows Mobile Smartphone has to be usable and in this instance a lot of that usability is about the keyboard itself. I found the SGH-i600’s keyboard pretty good to use at a fair speed. The Q9’s is about the same in terms of usability, though the keyboard design is very different.


In this case the key are large and arranged so that they touch each other rather than being separated. They have a rubbery texture, are very clearly marked and give a little click when they are pressed.


On the bottom row are several shortcut keys. These variously open the Calendar, Contacts and music library, activate the camera, and run the voice control software. The voice control button also activates the speakerphone when you are on a call. Add to these the shortcut buttons for the Windows Mobile messaging software and for the web browser, both of which sit immediately beneath the screen, and you can see that even though this Smartphone does not have a touchscreen it isn’t too difficult to use it one-handed.


Motorola has gone all RAZR with the buttons beneath the screen. They sit on a flat area and are separated by ridges and as each one occupies a relatively large space they are not difficult to use. This is a good thing, because as well as web browsing and message creation you use these buttons to start and end calls, get to the Windows Mobile Today screen, go back, and use the softmenus. Right in the centre of these is a relatively small navigation button.

On the right edge Motorola has put two scroll buttons. Between them is a select button, beneath them a back button. They do for moving through e-mails, web pages, documents and the like and if you hold the select button down you can use the scrollers to control the device volume.


The screen too is vital to usability and here we have a wide format 2.5 inch 320 x 240 pixel display. It would benefit from being a little larger, but in fairness it is in keeping with other devices and is sharp and bright enough.


On the software front, Windows Live Messenger is here as a bona fide part of Windows Mobile 6. There is always the possibility it won’t make it into versions of the device that operators include in their ranges, though. For example, Riyad found that Orange had taken it out of the Windows Mobile 6 SPV E650 he reviewed a while back. 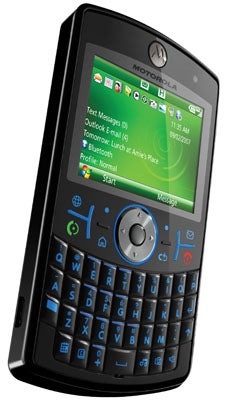 Elsewhere, Motorola has made some interesting software choices. Pocket Internet Explorer is gone, and in its place is the very good Opera web browser. Among its features is the ability to open more than one web page at a time in different windows, something that Microsoft really should have implemented in Pocket Internet Explorer with Windows Mobile 6, but failed to do.


Motorola has also chosen to eschew Mobile Office, the Word Mobile, Excel Mobile and PowerPoint Mobile suite that is newly available to Windows Mobile Smartphone users with Windows Mobile 6. Instead you get DocumentsToGo, a suite that lets you create Word documents, edit Excel, read PowerPoint and PDF files and managed Zipped archives.


There is a voice control utility that works fairly well in quiet conditions, and Motorola has included McAfee Virus Scan too. Not that there are any Windows Mobile viruses out there at the moment, but I guess Motorola thinks it is worth playing safe.


My review sample wasn’t a fully boxed retail version, but everything was ticketyboo with it except for the fact that the battery wouldn’t fully charge. I got it about 80 percent full, and from that managed four and a half hours of music with the screen forced on. I reckon a battery that can charge fully should manage at least five hours.


The Q9 is a bit on the large side for my taste, and while its keyboard is very good the screen is a bit small. Aside from the fact that it is hampered by the lack of Wi-Fi it does its job well.