The Motorola One Vision is an excellent mid-range smartphone that gets nearly all the basics right. But the Pixel 3a has a much better camera and is only moderately more expensive.

The Motorola One Vision doesn’t have the wow factor of the company’s more established Moto G7 Plus. But having thoroughly put the phone through its paces I can confirm it’s one of the best mid-range phones money can buy at the moment. Here’s why.

At a glance, the Motorola One Vision is a bog-standard looking smartphone. Like pretty much every 2019 flagship, and many mid-rangers, the One Vision sports a mixed material design that’s clearly taken much inspiration from the Galaxy S10 – it even has the same ugly hole-punch design front camera.

But it’s not the design that makes it special: It’s the phone’s software that sets it apart. The Motorola One Vision is part of Google’s Android One programme. This doesn’t sound like much but it’s actually a fairly unique and important selling point that’s rare in the sub-£300 price bracket.

This is a key factor that guarantees the handset will run a pristine, nigh, untouched version of Google’s mobile OS and receive updates to new versions of Android for a few generations to come. You’re not going to get that guarantee with any other £269 smartphone.

The only reason that past One-series phones such as last year’s Motorola One didn’t get Trusted’s hallowed 4.5 or 5-star rating was because of their slightly mediocre hardware. 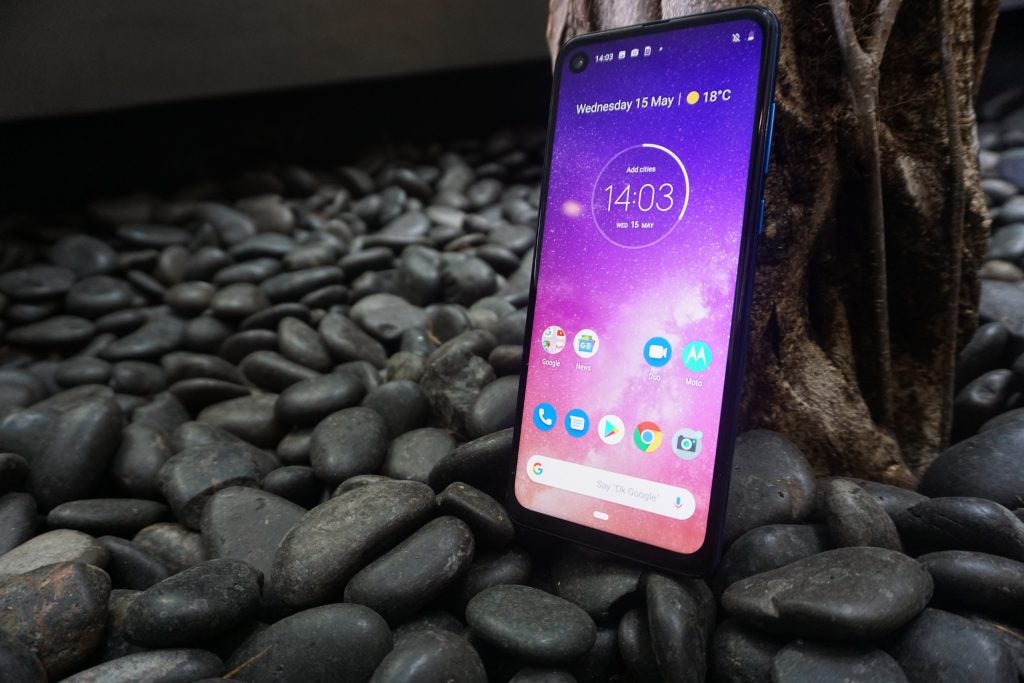 The Motorola One Vision battery lasts a day

As well as guaranteeing software updates, the clean Android install also offers a few tertiary benefits. The biggest of these is how it helps improve the phone’s battery life and performance.

This is because most Android Skins, like the OnePlus 7’s Oxygen OS and the Samsung Galaxy S10’s One UI add a load of features that run in the background. These can add cool new functionality but they also put a drain on the phone’s battery life.

The lack of these background processes is likely a key reason why the Motorola One Vision offers such good battery life, despite featuring an average-sized 3500mAh cell. With regular-to-heavy use, the phone will easily last a full day with around 20 to 30 percent of its juice still to spare.

Regular use entailed regularly checking social media and incoming messages, listening to music throughout the day, playing a few games of PUBG Mobile at lunch and watching some YouTube videos before bed.

It also deals with intensive gaming and video streaming fairly well. Watching Netflix with the screen at 150 nits brightness – the level most people will find comfortable – the One Vision lost around 7 to 9 percent of its charge per hour, which is respectable. The G7 Plus lost around 10 to 13 percent running the same test.

The clean install and lack of bloatware also helps performance. With real-world use, the phone blitzes through most tasks, including 3D gaming, despite being powered by mid-range hardware. My real-world impressions rang true when I ran the Motorola One Vision through Trusted’s standard suite of synthetic benchmarks.

You can see how it performed compared to the Moto G7 Plus below.

This adds up to make the Motorola One Vision a stellar mid-range smartphone that delivers on nearly all the basics. Make no mistake, if you want a great Android phone for less than £300 you’ll struggle to do better. 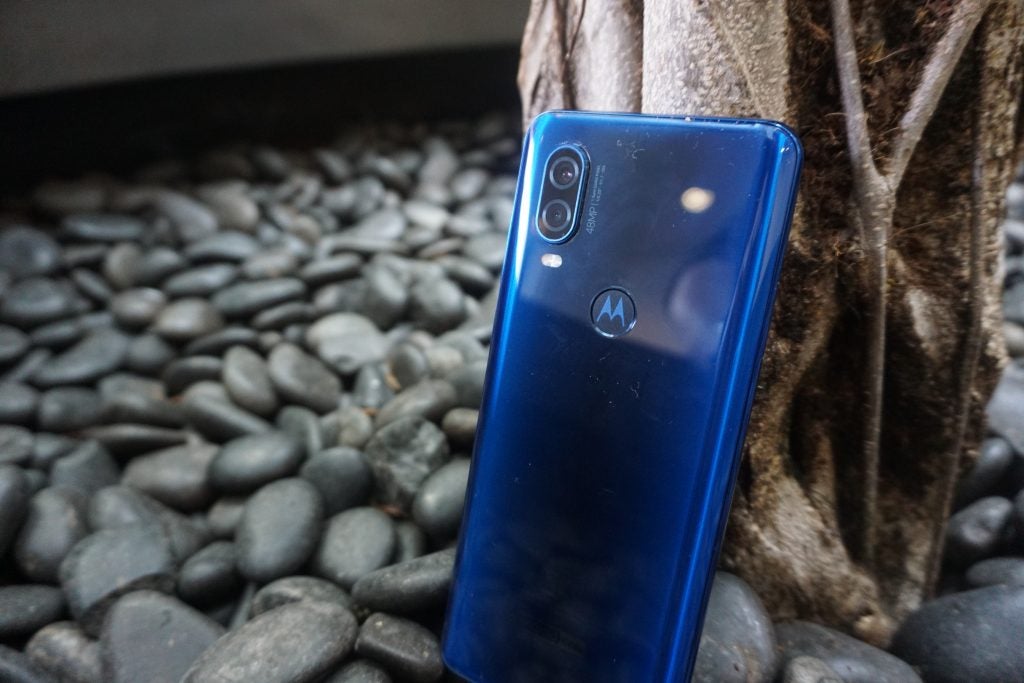 The camera on the Motorola One Vision has OnePlus 7-rivaling tech, but it’s not perfect

If you’re buying the One Vision as a result of Motorola’s aggressive marketing around the phone’s camera there are a few niggles you should be aware of.

Camera tech is currently the primary battleground in the smartphone market. Which is why Motorola has spent a lot of time marketing the One Vision’s photography chops and from a hardware perspective it’s pretty impressive, considering its price.

Motorola has loaded the One Vision with a dual rear camera setup that combines a primary 48-megapixel f/1.7 sensor, with OIS (optical image stabilisation), plus a secondary 5-megapixel f/2.2 depth sensor. The setup is very similar to that found on the OnePlus 7, which uses the same primary Sony IMX586 main sensor, again with a 5-megapixel secondary sensor for depth.

While the hardware is impressive at this point, the camera still feels distinctly average. In regular light, it works fine, for the most part. Shots taken around London during the day don’t match those taken on the Pixel 3a when it comes to overall quality but they don’t look overprocessed either and have suitably realistic colours all the same – my only real quibble is that skylines occasionally looked over-exposed.

The biggest annoyance is the camera’s autofocus, which is noticeably slower than the Moto G7 Plus’. There’s a clear delay when shifting subject matter, even in decent lighting, which makes impromptu photography a little tricky.

This is a shame, as the Sony sensor and One Vision’s software have a few unique features designed specifically for low light photography. The sensor uses “quad-pixel” tech, which makes the camera intelligently shoot and combine four pixel’s worth of image data into a single 12-megapixel snap every time you hit the shutter button. In theory, this should help remove noise and improve low-light performance.

For avid selfie-takers, the tech also features on the Motorola One Vision’s 25-megapixel front sensor, which captures with giant 1.8µm pixels – a factor that, on paper, should let you take usable selfies in low light.

As a final trick, Motorola has added its own camera app to further improve image quality. It follows the AI trend Google started with its Pixel line of phones and is one of the only additions, aside from Moto Actions, to the One Vision’s software. It includes a nifty AI feature that’s designed to help improve lighting in portrait shots and bokeh effects powered by machine learning.

The tech works quite well and gives portrait shots a decent sense of depth that’s missing on photos taken on competing phones around this price. But again, it’s not industry-leading and pixelation rapidly creeps in when shooting in low light.

You can see a selection of photos taken on the Motorola One Vision below. 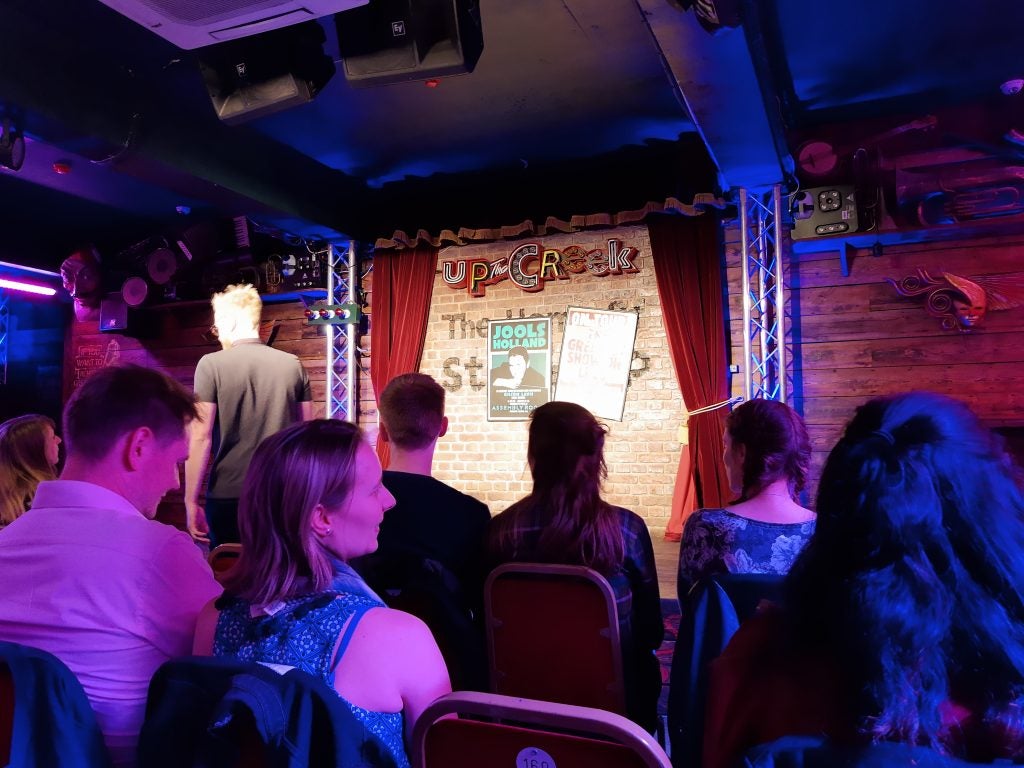 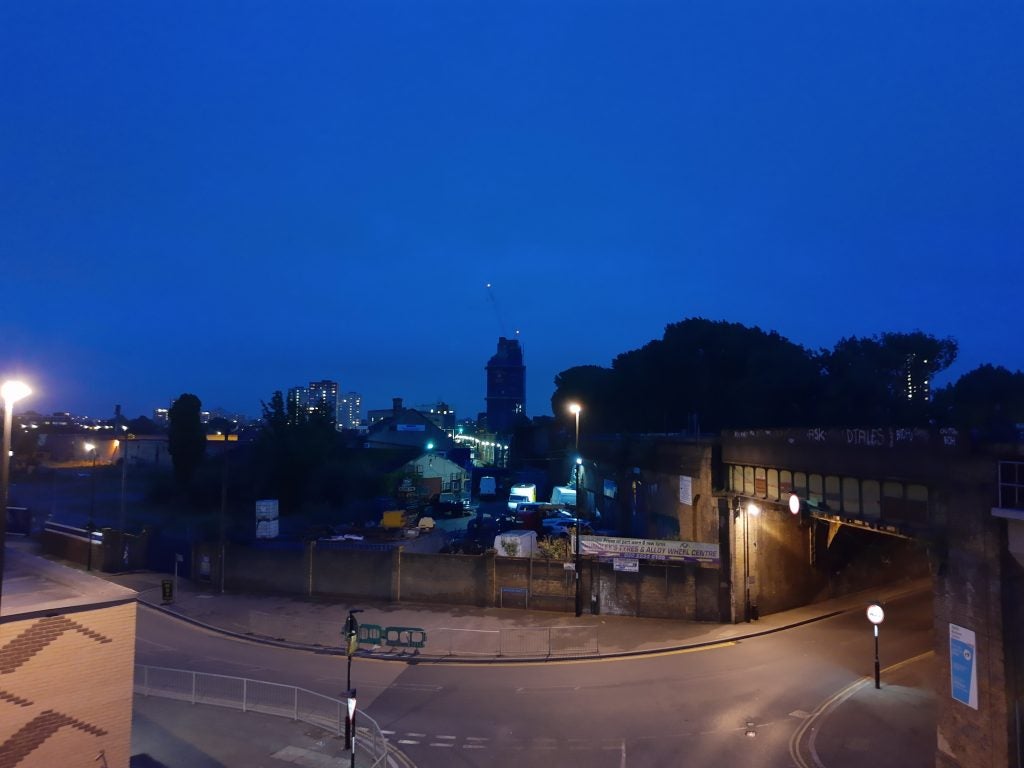 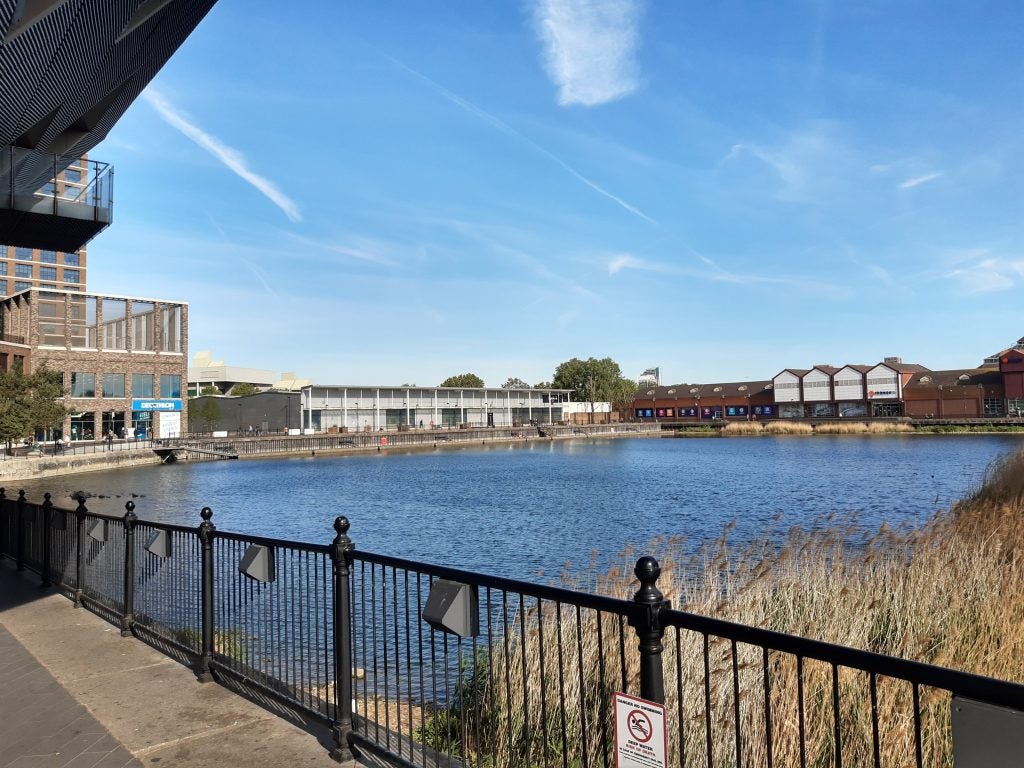 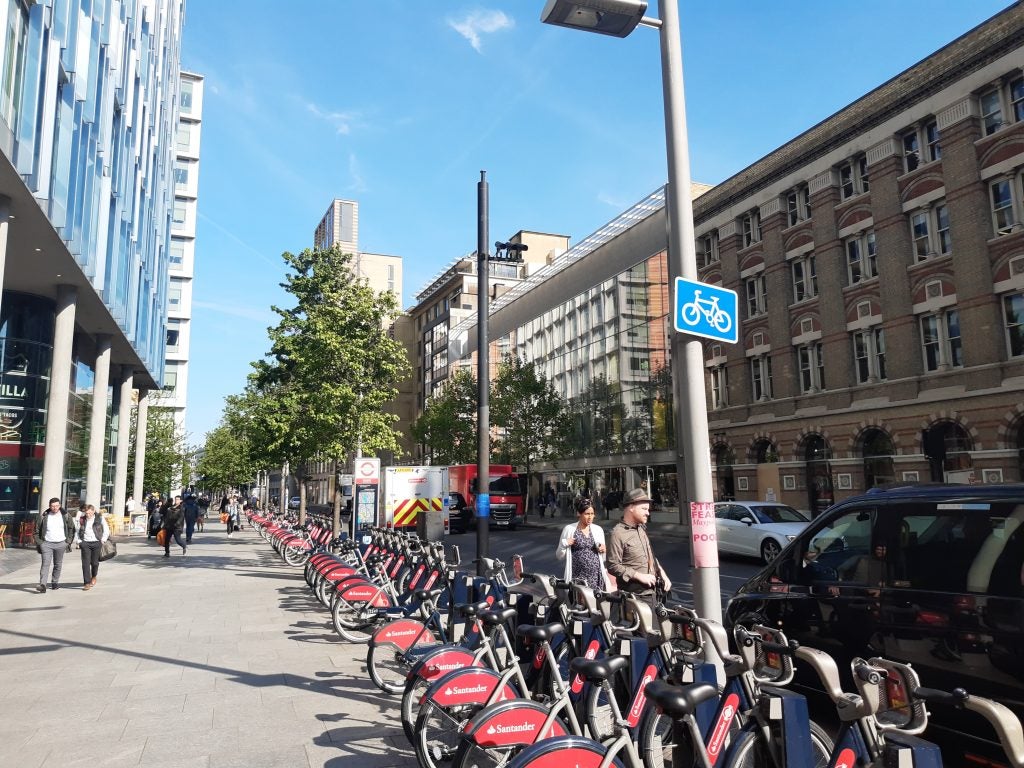 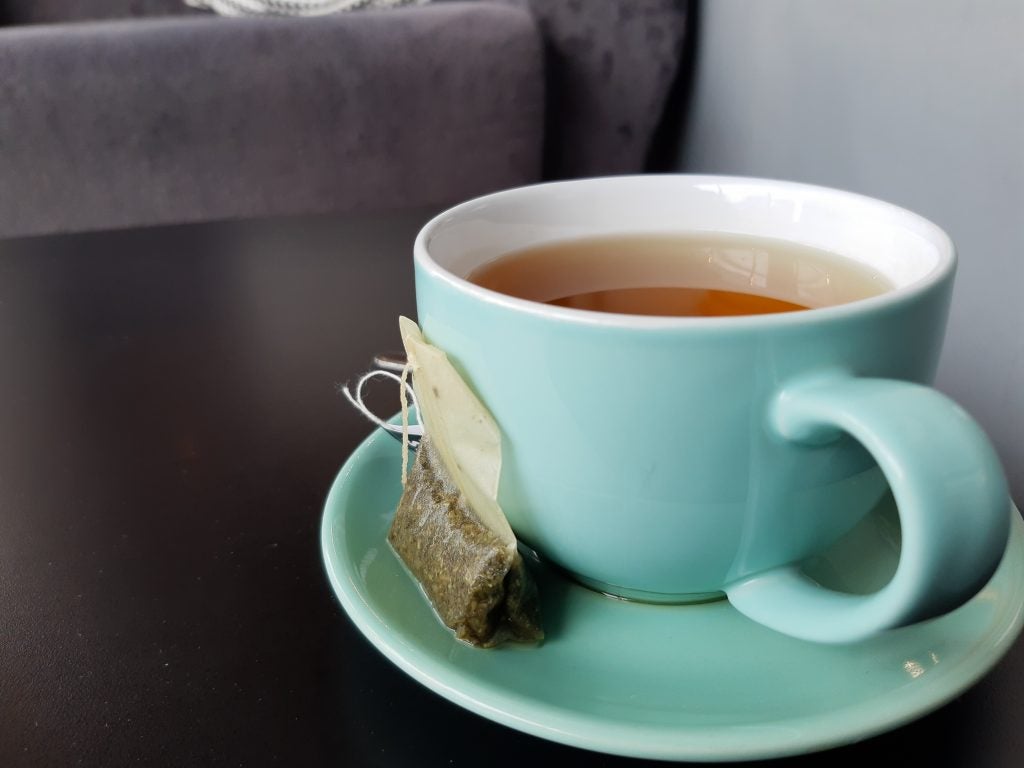 The theorised reason for the unusual aspect ratio is to offer up more screen real-estate when scrolling through apps such as Twitter but also to make movie watching more immersive (many modern movies are mastered in 21:9).

I’m not convinced about the need for it when watching movies, though. This is because most modern movies don’t take advantage of the aspect ratio when streamed on Netflix, Google Play or Crunchyroll. The aspect ratio is a bigger issue when gaming. Android games aren’t mastered for this aspect ratio, so popular titles, like PUBG, clip the screen, leaving big black bars on either side of the play area.

This is a little sad as the screen is otherwise one of the best I’ve tested on a phone this price. The 456.5 nit max brightness is excellent for a phone as affordable as this and coupled with the 0.1 nit black level gives the screen an impressive 1230:1 contrast ratio. To non-techies, this means the screen is wonderfully immersive and great for Netflix binges. 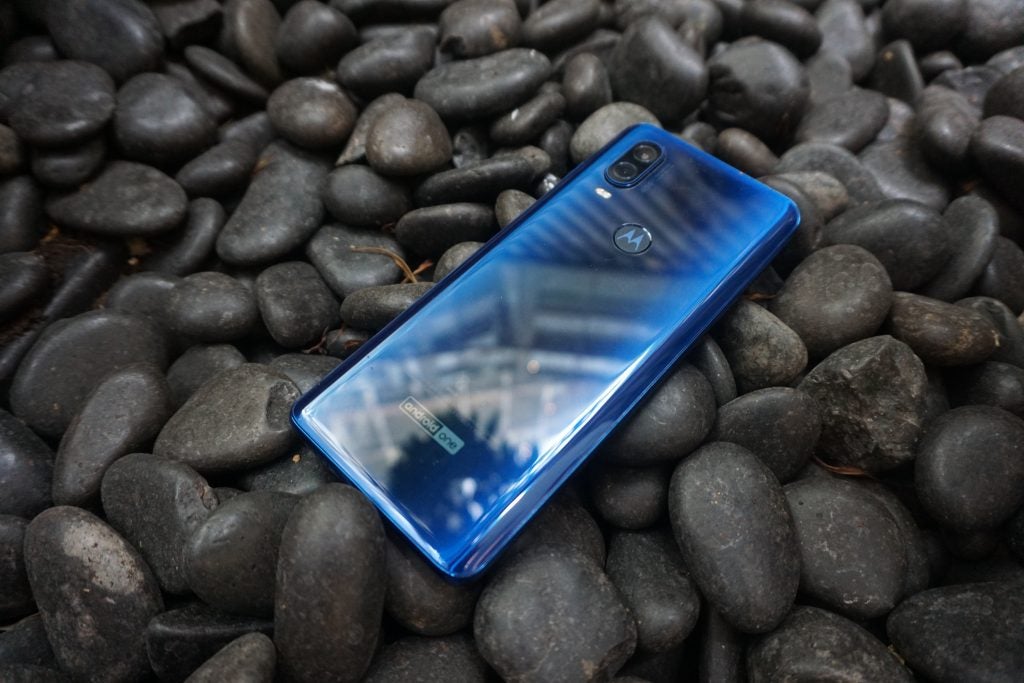 Should I buy the Motorola One Vision?

If you’re after a mid-range Android phone with near untouched Google software, you could do a lot worse than the Motorola One Vision. The phone gets all the basics right and thanks to that Android One user experience it’s blissfully bloatware free. It’s also guaranteed to get updates to newer versions of Android, which is rare on phones around this price.

The only serious downside is that its camera doesn’t match Motorola’s performance claims and I’m still not convinced a 21:9 aspect ratio screen is actually that beneficial. Google’s spiffy new Pixel 3a throws a further spanner in the works. The Pixel 3a costs a bit more but it offers a similarly clear Android install and a much better camera.