One of the more impressive elements of the Moto X is quite how much of its front is taken up by the screen – most of it. Having just a couple of millimetres to each side of the screen and less than an inch below gives the Moto X a greater screen-to-everything-else ratio than the vast majority of phones.

The display itself is less notable. It’s a 4.7-inch OLED screen of 720p resolution. That’s the same resolution as the Moto G, and a good deal lower in resolution than the 1080p HTC One and Samsung Galaxy S4 – both of which cost a similar amount if you search around online. It’s the first serious red-light indicator that Motorola may be asking for a bit too much cash for the Moto X.

Its screen is still sharp, but you don’t get the immaculate, smooth curves in text that you’ll see in a 1080p phone screen. You need to get reasonably close, but you can tell the difference. 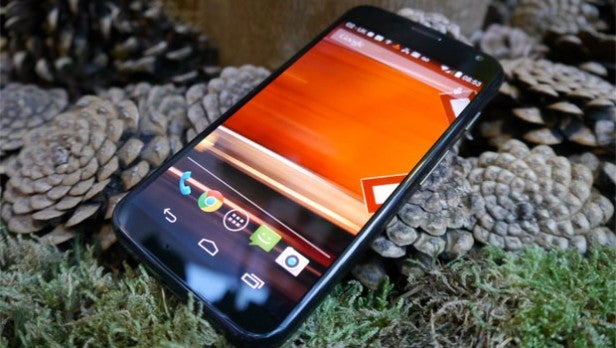 This situation could have been a lot worse, though. The Moto X uses an RGB subpixel array, where many other OLED screens use arrays with ‘shared’ subpixels or those with a more irregular pattern. These screen types further reduce sharpness, and that would have been a killer for the Moto X.

Image quality is largely what we’ve come to expect from an OLED screen. Contrast is great, with deep blacks that are only spoilt in use by screen reflections. However, colours are significantly oversaturated. As usual, this shows up most clearly in the reds, which appear very ‘hot’ and overexcited. The screens of LCD rivals such as the LG G2 and HTC One look more natural. We’re disappointed Motorola hasn’t added a way to cool down these colours. Because if we could, we would.

White levels aren’t quite on par with the top LCD screens either, being slightly less pure white than some of the competition. However, given how few people actually run their phone at maximum brightness, it’s a total non-issue. 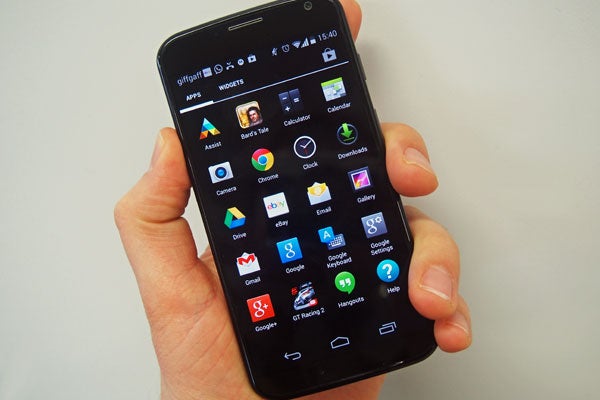 There’s one reason why the Moto X has to use an OLED screen instead of
the LCD type seen in the Moto G and the HTC One. It’s the phone’s
Active Display feature, which shows flashing monochrome alerts on-screen
when the phone is on standby. This feature would kill the battery of an
LCD screen because of those displays’ use of a backlight, but as OLED
displays use light-emitting pixels, only a tiny portion of the screen
has to be ‘activated’ to make this feature work.

Active Display is one of the Moto X’s top features – if you don’t care
about it at all, maybe you’d be better off with something else. It fades
notifications in and out while the phone is in your pocket, so you
don’t need to fully activate the phone to see what’s new.

Perhaps
the best bit is that when you put a thumb (or finger) on the unlock
button of the Active Display screen, you can see the subject lines of
your latest emails – handy if your inbox is a spam magnet. It takes a
bit of getting used to, but Active Display can save you time day-to-day. 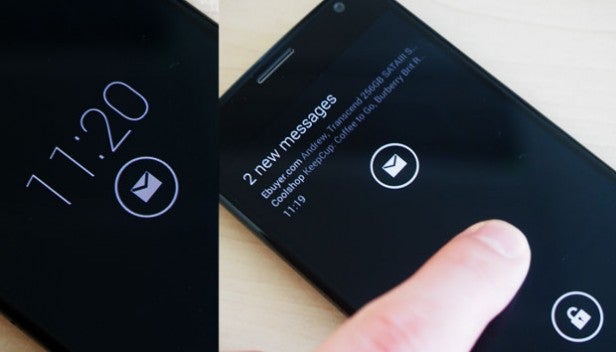 The Motorola Moto X is one of the first phones to launch with Android 4.4 KitKat. However, it doesn’t have the same Google Experience interface as the Nexus 5 – the phone that introduced the software. Instead, it has the more pedestrian Android interface found on older Jelly Bean phones. You get five homescreens as standard, a customisable app launcher bar, and a universal search that sits on all five homescreens.

The Motorola Moto X look is almost entirely vanilla Android 4.4 KitKat, and that makes using the phone a low-fuss experience that’s free of the features-bloat you get with something like the Galaxy S4. It also helps to leave you with a reasonable amount of free storage – you get 12GB to play with from the original 16GB. It’s not great, but it could be worse.

The core apps arsenal of the Motorola Moto X is supplied entirely by Google. There’s Maps, Calendar, Hangouts for chat, the Chrome browser, Google Drive, the Quickoffice suite and the various Play books/movie/apps portals. It’s a great starting point for any Android phone, and each part of this Google app family is great. Every Android phone has these, but few let them take as much of the spotlight as the Motorola Moto X.

Motorola’s contributions amount to two apps that don’t try to be anything more than side features – Motorola Assist and Motorola Migrate. 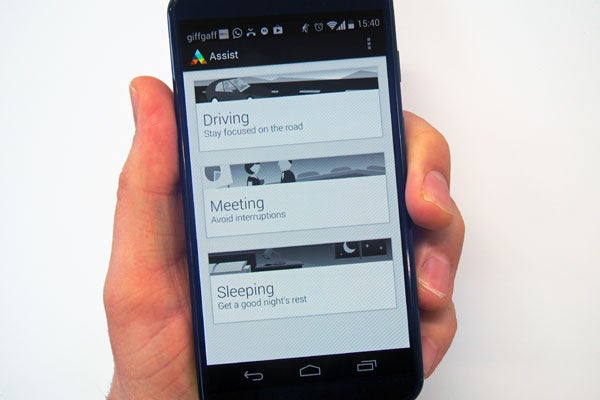 Motorola Migrate is an app you install on your old phone to help transfer all your content to the Moto X. It’ll then give you a QR code that you scan-in using Migrate on the X, and all your old stuff (contacts, media, texts and so on) will be downloaded to the new phone. Google already does the basics in this sense by attaching contacts to your Google account, but if you want more, it’s on offer here.

Motorola Assist is, to us at least, more useful. It stops you from getting alerts at certain times of the day. Its primary function is to stop the Moto X from disturbing you when you’re trying to sleep. However, it can also hook into Google Calendar and stop you from getting poked while you’re in meetings, and read out text messages using a synthesised voice while you’re on the road.

You can also make the phone automatically reply to messages while you’re driving, if staying connected is particularly important. Assist uses the Moto X’s GPS to determine when you’re driving, which is pretty smart.