The MC55 is what Motorola calls an EDA or Enterprise Digital Assistant. This means it’s not designed to be plonked down on the table next to your keys on a night out to show off what a fancy handset you’ve got, but instead has been put together to withstand the daily rigours of business use out in the delivery van or at home on the factory floor. 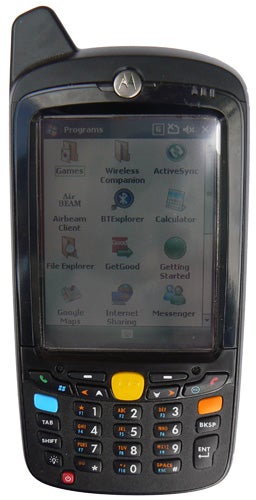 Motorola claims that this is the smallest and lightest of its ruggedised enterprise devices. If that’s the case then we wouldn’t like to see the other models in the range because this is one hefty beast. It’s much larger than it seems in the pictures as it has the width and girth of around four of your average smartphones.


There is a reason for this bulk, however, as the handset is designed to be tougher than an armour clad Arnold Schwarzenegger. The case can withstand a drop onto concrete from a height of 1.2m and is also sealed to IP54 standard. This means it’s protected against dirt, dust and water spray (although it’s not fully waterproof, so don’t try taking it for a swim).

As you can probably tell by now, it’s no super model in the looks department, but then again it’s not really designed to be. That said, the large size is a bit of an issue as it makes it quite bulky to hold and heavy to carry around. Therefore, it’s probably not an ideal handset for the likes of cycle or motorbike couriers (surely one of the target markets for this type of device).


The MC55 runs Windows Mobile 6.1, which isn’t the easiest operating system in the world to use, but it’s probably the most versatile for the types of applications that the MC55 will be called on to run. Industry is one of the areas where Microsoft has actually made significant in-roads with its mobile OS, so there’s a wealth of off the shelf applications already out there.

The model we had for review, the MC5574 – PZCDKRRA7WR (rolls off the tongue doesn’t it?), has a standard numerical keypad, but the device is also available with a full QWERTY keyboard instead. As well as the numerical keypad there’s also a wealth of programmable buttons plus a handy button for turning on and off the screen’s backlight to help preserve battery life.

The 3.5in screen is much larger than the displays you usually find on smartphone, but unfortunately its resolution at 320 x 240 pixels is relatively low so text and graphics look quite blocky. Nevertheless, it is bright and responsive to stylus or finger presses which is what really matters on a device like this.


The MC55 is built around a Marvell XScale PXA270 520MHz processor and in use feels relatively nippy. However, it’s not exactly laden down in the memory department as it has just 128MB of flash memory and 256MB of RAM, which might be a problem if you need to run really memory hungry apps. At least storage space can be increased using MicroSD cards which slot into a holder found under the device’s clip on battery pack. 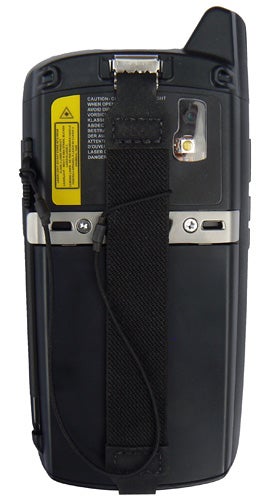 But the MC55 is not just about performance, it’s also about features and in this department it scores pretty highly. At the top of the handset there’s a 1D/2D laser barcode scanner with a decent 60cm range and this is matched on the rear by a 2-megapixel camera with autofocus and an LED flash. The image quality from the camera isn’t brilliant, but it’s certainly good enough for the type of signature collection and other data grabbing purposes it’s likely to be put to on a daily basis.


There’s also onboard GPS thanks to the built in SiRFstarIII chip. This works brilliantly as not only is it fast to lock on to satellites from a cold start, but it’s also very good at hanging on to weak satellite signals to the extent that often it can even keep a lock on your position indoors.

In terms of connectivity, the device is a bit of a mixed bag. You do get Wi-Fi (B and G) and Bluetooth V2.0 with EDR, and the Wi-Fi aerial seems exceptionally sensitive. When used on a street in London it picked up a total of 12 different Wi-Fi routers. By comparison the iPhone and HTC Diamond2 picked up just three. However, on the phone side of the device things aren’t as hot. Although the handset is quad-band, it doesn’t support 3G data speeds so you’re limited to a slower Edge connection where available.


Another annoyance with the device is its fiddly power connector. The power adapter is very large (about the size of one shipped with ultraportable laptops) and attaches to a separate cable that houses a large power connector which clips onto the base of the device. At first, actually getting the power connector to attach to the device was a bit of struggle. No matter what we tried, and even though the connector seemed to be attached properly, it wasn’t connecting to the power pins on the MC55 so no juice was reaching the battery. 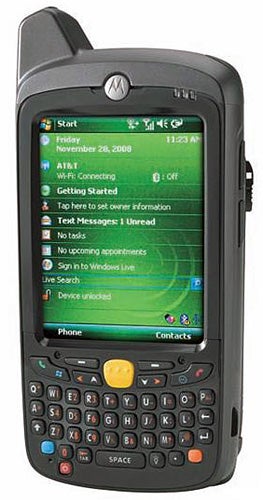 However, it turns out that the trick is to hold the connector hard against the phone before you lock the two side clips into place. Even with this trick mastered, there were still times when it lost the connection with the phone’s power pins and stopped charging. We’re not sure if this was a problem solely with our review device, but it does seem to indicate that the whole connector needs a bit of a redesign.


Nevertheless, battery life isn’t too bad. Motorola says it’s good for around six hours of talk time and will keep ticking over for around 100 hours in standby. We got around a day and a half out of it with medium usage of the MC55’s core features. That sad, this is the type of device that’s likely to be placed in the charger at the end of each working day, so mammoth battery life probably isn’t a priority. However, if you do need longer battery life there is a high capacity 3600mAh battery available as an option (the standard battery is a 2400mAh power pack).


The MC55 is designed as a mid-range enterprise device and as such it fits its niche quite nicely. It’s fast, has a good range of features and is tough enough to stand up to even the most demanding environments. We’re not overly keen on the fiddly power connector and think it could have done with a bit more memory and support for 3G. However, if you really need 3G support then you can always opt for a model from Motorola’s higher-end (and even more expensive) MC75 range.