You might not have heard of Motorola’s Enterprise Mobility Division before. It was formed at the start of this year when Motorola bought Symbol Technologies, a respected maker of enterprise grade mobile computing kit based on a variety of software platforms including Windows Mobile and the Palm OS.


The first product form the new Motorola division is the MC35 Enterprise Digital Assistant. Clearly designed by the Symbol team rather than having had any Motorola input, it is what I’d call a semi-ruggedised handheld.


It doesn’t have the hugely overprotective design that would make it a real drag to carry around, but the casing is more solid than you’ll find on most other handhelds. 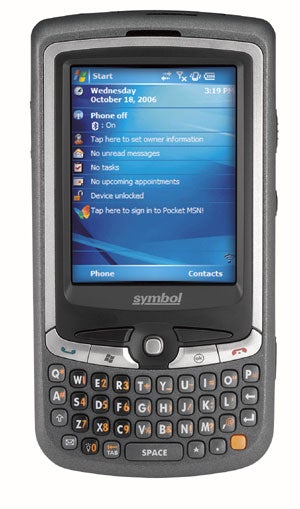 In portably terms it means this keyboard handheld is a bit larger and a bit heavier than the kind of Windows Mobile devices we usually look at here at TrustedReviews. It weighs 185g and measures 127mm tall, 66mm wide and 21mm thick.


In looks terms you are going to want to steer clear if you are a fan of sleek, shiny kit. The grey, silver and black casing is hefty and functional. The only ‘wow’ factor responses you’ll get from others when you take it out of your pocket are likely to focus on words like ‘giant’ and ‘ugly’. I’m not knocking the designers here, just pointing out that this isn’t intended to be a looker, but a doer.


In ergonomics terms the mini keyboard is on a par with the best of the competition. The qwerty keys aren’t large by any means – I measured them at about 4.5mm square. They are well spaced, though, and you can peck at them with thumbs for writing short gobbets of text.


The screen could be a bit of a problem. It measures 2.8in corner to corner, and delivers 320 x 240 pixels. This is no different to many other Windows Mobile device screens. But it is deeply recessed in its frame.

I’d guess that is to help provide some protection, though it won’t stop the screen cracking if you drop something heavy directly on it. And it could prevent you finger-prodding icons or menu options that are located in the corners of the display.


The stylus, your other option here, is sadly very lightweight. It feels like air in the hand. When will designers learn to make styli weigh a few grams so that they feel like a real pen?


The part of the device I had most trouble with is the mini joystick. This sits between the screen and qwerty keypad, and you use it to move around between menus and click it to make selections. I just don’t like mini joysticks. They never feel as comfortable as navigation pads. 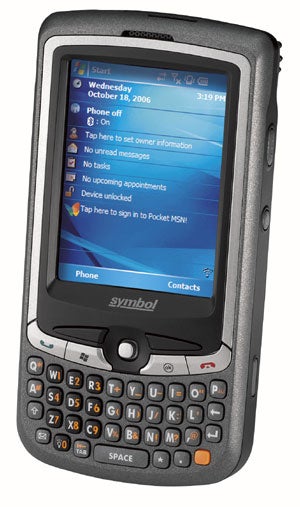 The other buttons are better but not perfect. The Call, End, Start menu and OK buttons are large and clearly marked. I’d have liked them to be raised a little from their surroundings as then they’d be easier to identify by touch. The same goes for the two long, thin soft menu buttons.


The MC35 is a connected device so you can make voice and data calls with it. It supports quad band GSM with EDGE but sadly it doesn’t support 3G so Web browsing and other data based communication is relatively slow.


It runs Windows Mobile 5.0 rather than Windows Mobile 6. So those with complex data synchronisation needs and the Exchange Server 2007 based network which could service these won’t be able to take advantage of all the data sharing options on offer.

I chose the latter and got nine and a half hours of non-stop music with the screen forced to stay on. A low battery warning came after six and a half hours. In the real world this would give any worker close to half a day to find a power source. Given that the MC35 charges over USB we are talking mains, a car or a USB charge/sync cable as charging options. 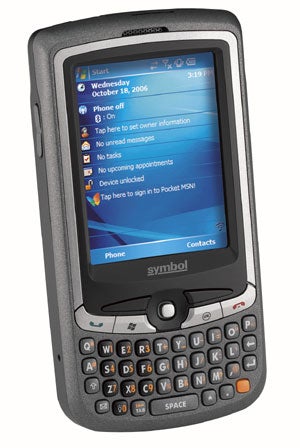 I also like the fact that the MC35 uses SD cards to expand on the internal memory. The slot is on the top edge of the casing and protected by a rubber cover. The 41MB of storage memory my review device reported after a hard rest can easily be expanded using this non-fiddly (and cheap) flash card format.


There’s a 2.5mm headset jack. Normally I’d complain about this as I think even professional users have the right to listen to some tunes from time to time, and a 3.5mm jack lets them ditch the provided headset easily. But the market is different for a ruggedised handheld and the headset jack is really only intended for handsfree voice calls, so I am relaxed about the jack size.

There are several versions of the MC35. All have Bluetooth, infrared and a GPS antenna. You can variously also choose to have Wi-Fi and/or a camera making four variants in all. The camera is a simple 2-megapixel one, with a small LED flash unit to assist with indoor photos. You can even switch the camera into barcode reading mode if this is something that you, or more likely your business needs.


Rugged or semi-rugged handhelds aren’t everybody’s cup of tea, and have a finite set of markets. Looks are less important than ergonomics, though they shouldn’t be thrown out of the window completely. In this case the looks are pretty uninspiring, but more significantly the mini joystick makes navigation less intuitive than it could be. Maybe Motorola will add a little something to the mix here (though hopefully not flat keyboards).


On the plus side, battery life is outstanding, and that’s going to be paramount to the kind of business user who spends most of their time out in the field.