The last time I reviewed a 3G phone on the 3 network was over a year ago and many things have changed since then. The most important change is that 3 has finally got competition from the established mobile phone carriers. To be honest, I bought a 3 phone some time ago, but it wasn’t because any of the services 3 provides, but rather because of the amount of inclusive minutes you get every month.


I’m sure I’m not the only one that has been temped, but there are times when I regret my purchase – early on this was due to the poor network coverage, which I can gladly say has been vastly improved upon. However, one thing that hasn’t changed is the poor battery life of the handset, even though I’m using the extended battery. 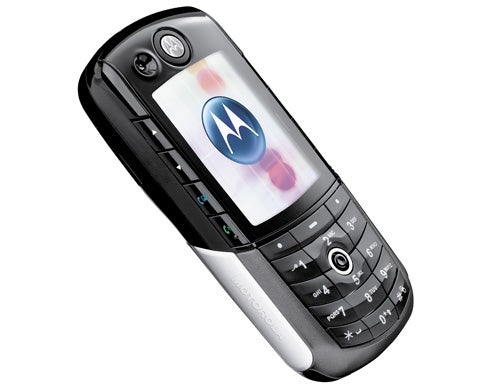 My handset is a second generation 3G phone, but if the new Motorola E1000 is anything to go by, things are set to improve with the third generation of handsets that are now being launched. The E1000 is a traditional “candy bar” phone while most 3G phones so far seem to have been of the flip variant. If this is a good thing or not tends to be down to personal taste, but Motorola has come up with some interesting additions to a traditional design.


The first thing you notice about the E1000 is the large screen and at 34 x 44mm, with a resolution of 240 x 320 pixels, this 16bit display is excellent in use and very clear and easy to read. The second thing you notice is the odd button layout – there’s a row of four buttons on each side of the display, which is similar to the design of the Siemens SX1, although not quite as brave as having the whole keypad down the side of the phone.


On the left hand side are the volume buttons as well as a video call and a voice call button. On the right hand side you’ll find a quick access button to the Internet, one for the camera, a back button and an end call button that also doubles up as the power on/off button. The camera button will also capture pictures once the camera software is running. 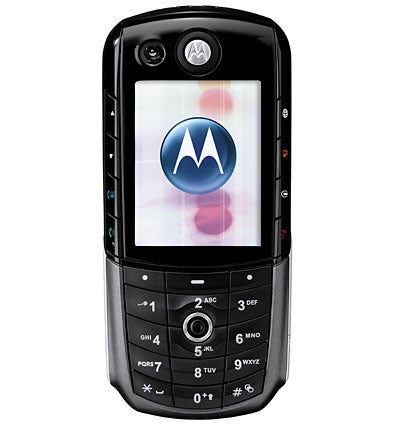 Just below the screen are three soft buttons, with the middle one taking you directly to the phone’s menus. One thing I found strange with the E1000 is the location of the small joystick, as it is placed between the 2 and 5 buttons on the keypad – this becomes particularly awkward when you’re trying to play games on the phone. You should also remember not to place your phone face-down on a surface – the joystick sticks out quite far from the keypad and it could get pressed inwards by mistake.


With the E1000 being a 3G phone it has two cameras, the rear one is a 1.2 megapixel camera with a native resolution of 1,280 x 960 pixels, while the front one which is used for video calls can only manage VGA quality – 640 x 480 pixels. This is not really an issue, since the video quality is heavily compressed and the picture you receive on the other end doesn’t look anything like the one you see of yourself in the preview window.


The good news is that we successfully made a 3G video call between the E1000 on 3’s network and a Sony Ericsson V800 on Vodafone without any problems at all, which goes to show that 3G is maturiing nicely. We’ll have a full review of the V800 up shortly.

The rear camera also has a built in photo light, similar to the light you get on a camcorder, since it’s a bright LED. However, there is no actual flash when you’re taking pictures in low light. The range of the LED isn’t very long either, but it will help to brighten up pictures taken in dark surroundings.

The top of the phone features a hole in which you can attach a neck strap, although I would say that at 138g, the E1000 is a little on the heavy side to be comfortably carried around your neck. Also, the dimensions don’t lend themselves to being necklace friendly at 113 x 54 x 20mm (HxWxD). Behind a flap on the right hand side is a 2.5mm socket for a hands free headset and at the bottom of the phone is a combined charger and data connector – you can purchase an optional USB data cable and the Motorola MobilePhone Tools software if you want to sync your phone with your PC.


That said, the E1000 features Bluetooth, so there is no real need for the USB cable, unless you’re planning on using it as your primary MP3 player. The E1000’s storage capacity can be expanded with TransFlash memory cards. These tiny memory cards are smaller than the SIM card and come in sizes up to 128MB at the time of writing, with 256MB and 512MB cards due early in 2005. Why Motorola went with TransFlash in this fairly chunky phone is anyone’s guess, as a more readily available memory format like Mini SD would have been cheaper.


So now we have three tiny memory formats for mobile phones and which will become standard, if any at all, is anyone’s guess. The reason why it makes sense to get the USB cable if you’re planning to transfer music onto the E1000 is because it will take a long time to copy large amounts of data via Bluetooth. But if mobile music isn’t on your agenda and you’re happy with the 16MB of integrated memory, Bluetooth transfer speeds will be fine. 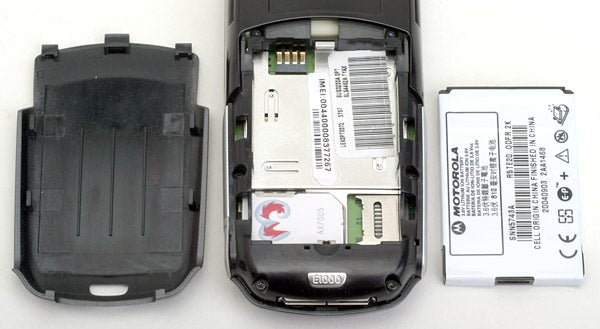 Finally the E1000 also supports AGPS or Assisted GPS, which doesn’t wholly rely on satellite data, but rather takes advantage of the mobile phone masts to triangulate your position. The only problem here is that you have to pay 3 a fee every time you want to use the service and at 25p a go, it’s quite expensive. Of course, on those occasions when you’re completely lost and have no idea which direction to go, the 25p may seem like a real bargain.


There are a few other functions that are worthy of a mention. The E1000 is a tri-band phone apart from being a 3G UMTS handset, so you can use it if you travel across the Atlantic. Motorola has also fitted a very fancy speaker to the E1000, although it is not quite true stereo due to the narrow sound field, it is the closest you’ll get from a mobile phone and the sound is pretty good, all things considered.


Another neat touch is that you can playback video content in full screen by flipping the video into a landscape format, which takes full advantage of the high resolution screen. This might make the idea of downloading video content even more appealing, although I’m still sceptical about downloading content from 3’s online portal, since the costs can mount up all too quickly. Also, 3 still doesn’t give you open Internet access, and you are completely limited to the content provided by the 3 portal.

I have to be honest here and say that normally I don’t like Motorola phones because the menu system has traditionally been poor. However, the E1000 is a breeze to use and most things are where you would expect them to be. The E1000 has a range of handy software applications that you would expect to find in a modern phone such as a calculator and a calendar.


I’ve used a fair few phones over the years, but I’ve never come across a phone with such a comprehensive list of contact options. Once you’ve entered someone into the phone book you can enter full address listings, attach a photograph and even add their date of birth. You can also group your contacts in several different categories, so you can keep your private and work contacts separate. 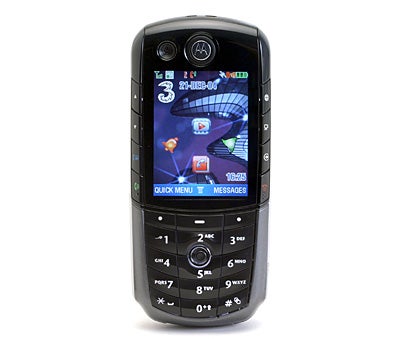 The E1000 also supports voice dialling and it’s very easy to set this up. Voice dialling can be set individually for each contact and you record each voice tag twice to improve the accuracy of the recognition. The only slightly annoying thing is that the voice tag is read out each time you scroll past a name in the phone book.


One thing that finally seems to be improving is the battery life of 3G phones. The E1000 seems to have a much better battery life than my older 3G phone. It’s still not as good as a GSM phone, but you can at least use the E1000 for more than a day without having to charge it up over night, which is a big plus. Another upside is that the E1000 seems to have much better reception than my old 3 phone and is usable in areas where my phone reports no coverage.


The innovative design does mean that you sometimes end up pressing the buttons by the side of the screen when you’re taking the phone out of your pocket or picking it up. But as long as you turn on the key lock, this isn’t something that you encounter too often. 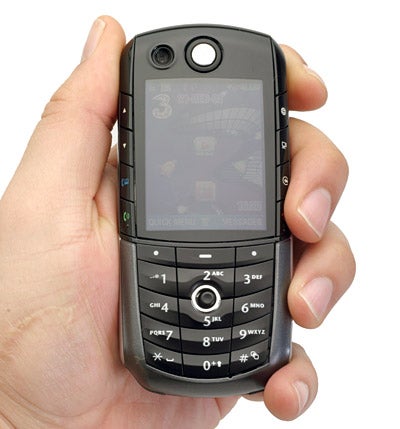 Overall I’m very impressed by the Motorola E1000, let’s just hope that 3 doesn’t remove any of its Bluetooth functionality in the retail version – the Bluetooth in my current 3 phone can only be used with a headset and not for file transfer.


The Motorola E1000 is one of the first of a new wave of 3G phones to enter the market. Motorola has impressed me with a very feature rich phone, although a more common memory card format would have been preferable. There are some minor flaws with the E1000 but none of them detracts too much from this otherwise excellent 3G phone.