It was only a couple of months ago that Motorola launched the world’s thinnest smartphone in the shape of the Droid Razr, but it appears as if thinness didn’t do it for everyone and the company is back at CES 2012 with a chunkier Razr which features a whopping 3,300mAh battery, promising two-and-a-half days of continuous music streaming.

Whatever you thought of the Motorola Razr, everyone agreed that it was thin. At just 7mm at its thinnest, the phone was almost too thin for many people, especially given its large 4.3in screen. 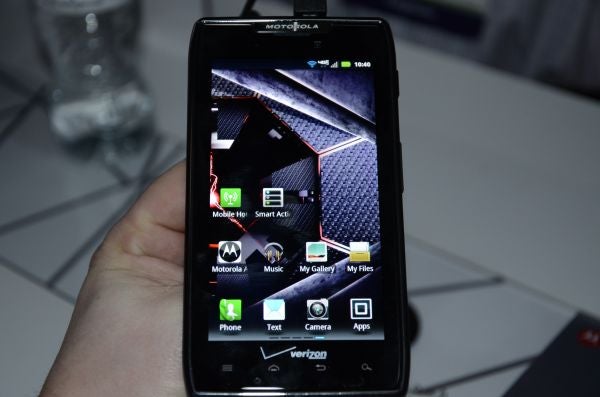 Well Motorola must have been paying attention to these people because it has launched a new Razr which is identical in every way except for a bloated 8.99mm profile, extra weight and larger battery.

The new Motorola Razr Maxx keeps the 1.2GHz dual-core Texas instruments OMAP processor, the Super AMOLED Advanced screen, 8 megapixel rear camera capable of capturing 1080p footage, Android 2.3.5, 1GB of DDR2 RAM and, as this is initially launching in the US, a 4G radio.

It’s strange to see phones getting thicker, as for years now the race has been to the bottom in terms of thickness, but Motorola packs a huge 3,300mAh battery (compared to 1785mAh on the original) into the Razr Maxx, meaning it is necessary to bulk the phone out a little.

In the hand the phone feels anything but bulky and it’s only when you place it next to last year’s Razr that would you notice the difference. It’s solidly built, retaining the Kevlar-covered rear of the original and we have to say it felt better because of the extra weight and bulk.

The boost in battery from 1,785mAh to 3,300mAh is a major step up and Motorola is promising 22 hours talk time from a single charge which is more than double what most smartphones deliver.

Here at CES, Motorola was unable to tell us whether or not anywhere outside of the US would be getting the new Droid Razr Maxx but considering we did get the Motorola Droid Razr in the UK, we would expect the fatter phone to land at some stage in 2012.

With the hardware and software identical on the two phones except for the battery and 2mm in thickness, which phone you buy will come down to a personal choice. For us, though, on initial test the bulkier phone feels better and the added battery life makes the decision an easy one.

Does the idea of a slightly bulkier Motorola Razr with a much improved battery life entice you? Let us know in the comments.