Motorola’s Droid range of smartphones normally don’t make it across the Atlantic to Europe and there’s no reason to think it will be any different with the latest model, the Droid 4 – especially given that it is a 4G-equiped model and in the UK, we’re still a few years away from having a working 4G network. 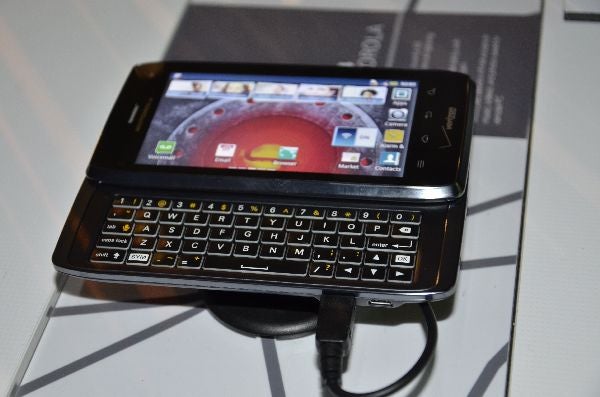 The phone itself features a 4in qHD (540 x 960) screen which, like the rest of the phone, has been coated in a special nano-coating to help make it water repellant and save it from scratches.

While the screen had excellent viewing angles  the screen itsefl appeared dull or washed out and not very sharp – and that was with brightness set all the way up.

Despite the presence of a QWERTY keyboard and the 4G radio, the phone is surprisingly slim measuring only 12.7mm thick. In use it felt even less than this thanks to beveled sides which help make it easier to hold.

The action of the slideout keyboard was a little stiff but felt very solid. The keyboard itself sits in the middle of the bottom panel with quite a bit of space on either side which we felt could have been used more practically by Motorola. 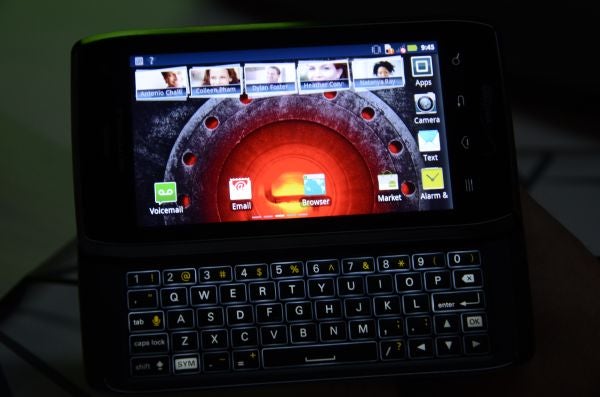 That said, the typing experience on the Droid 4 is among the best we’ve experienced on a physical smartphone keyboard. The chiclet-style keys have been individually laser-etched making them sharp and precise. The keyboard is also LED-backlit making typing in the dark a breeze. The keys have a domed, pillow shape making it very easy to type on and also very responsive.

Around the sides of the phone you’ll find a volume rocker, micro USB
port for charging and data transfer, an HDMI out and a 3.5mm headphone
jack. On the front is a 1.3 megapixel camera for video-calling and on
the rear is an 8 megapixel camera capable of capturing 1080p video.

The phone is powered by a dual-core 1.2GHz processor which is backed up by 1GB of
RAM and 16GB of internal storage. This can be expanded with a microSD
card up to a further 32GB.The phone measures 127 x 67 x 12.7mm and
weighs 178g – though feels lighter in reality. 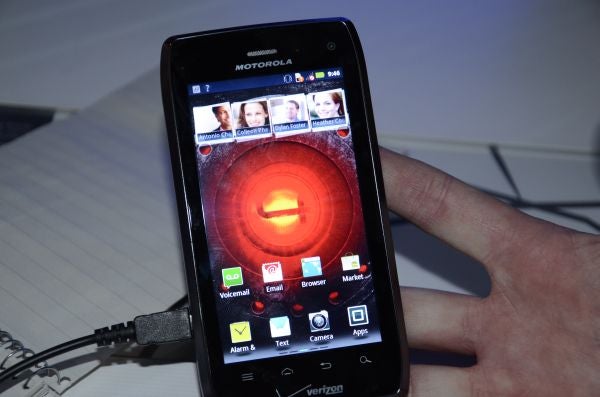 The phone runs Android 2.3.5 but Motorola has guaranteed this will be
upgraded to Ice Cream Sandwich by the second quarter of 2012. The
Android UI has been skinned by Motorola and the company has included the
MotoCast software for remote TV viewing and Smart Actions, which can
help save your battery life. It is also compatible with the various webtop
peripherals such as the Lapdock. 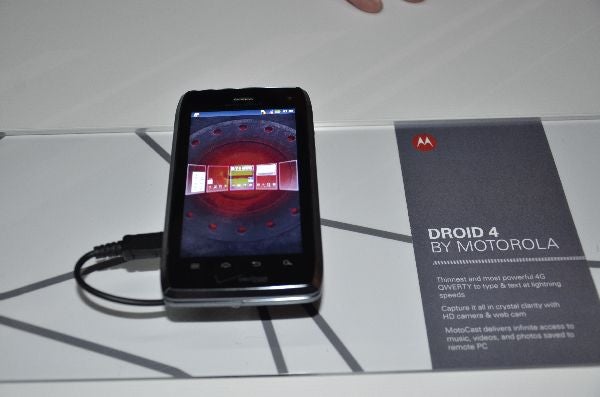 We’ll have to wait to see if Motorola will change from tradition and bring this
latest Droid to the UK but we won’t be holding our breath – which is a
pity as it’s a decent phone with an excellent keyboard.

Let us know what you think of the Motorola Droid 4 in the comments below.