After years of pumping out seemingly endless re-heats of its Razr handset, Motorola’s mobile phone division found itself in trouble last year as the market swiftly moved away from it at a time when it seemed to have nothing new or exciting to offer. Thankfully, the company has regrouped and refocused around the idea of using Android as its operating system of choice. As a result there’s a whole host of new Android-based smartphones from Motorola hitting the market, with the first arriving in the form of the Dext (or Cliq as it is known in the US).


Motorola’s switch to Android has to be one of the best decisions the company has made in a long time, as despite having produced some brilliant hardware designs in the past, the user interface Motorola has used on its phones has always been poor, especially as it seemed to insist on sticking with iTap instead of T9 and squirreling major functions away in confusing menus.


Thankfully Motorola hasn’t simply taken the vanilla version of Android Cupcake and stuck it on the Dext. Instead, like HTC, it has added its own enhancements over the top in the form of its Motoblur interface. What you get is a bunch of live homescreen widgets and apps that give you quick access to social networking services like Facebook, Twitter, MySpace and Last.fm. There’s also a widget called Happenings that neatly pulls together all the social networking posts from your contacts into a single stream. These widgets work well and certainly save you the hassle of constantly logging in and out of different social networking services to check updates or make posts. 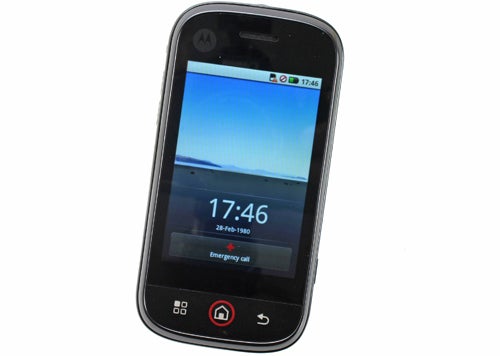 However, there’s more to Motionblur than just widgets, as it also acts a bit like Microsoft’s new MyPhone service in that it automatically backs up all the content from your phone to a central server. As the data is then held in the Motoblur cloud you can then access it anywhere from a PC or use it to rapidly reinstall all the data on a new phone if some scally has done you over and nicked your handset. Speaking of which, it also allows you to track your mobile remotely using the onboard GPS and wipe its contents if it’s not somewhere where it should be.

So Motorola gets brownie points for the phone’s software, but what about the Dext’s hardware design? It has to be said that the phone is a bit of a disappointment when it comes to looks. For a handset that’s obviously aimed at the young, or at least the young at heart, it looks very ‘businessy’ and drab. The boxy, all black finish comes across as very dull next to the funky styling of the HTC Hero, for example. But it’s the chunkiness of the phone that’s so disappointing. At nearly 16mm thick, it really does feel quite large and ungainly in your hand. 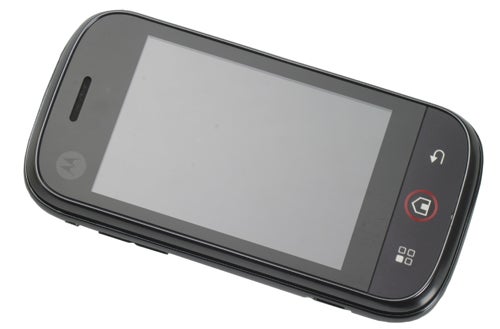 Of course there is a reason for this as the body of the handset houses a slide-out QWERTY keyboard. Interestingly Motorola hasn’t used the full width of the phone for the keyboard, but has instead used a portion of it on the left hand side for a four way direction pad. Despite this, the keys are actually fairly roomy and have good response, so it’s easy to work up a decent speed when typing out emails or text messages. It’s certainly one of the better keyboards we’ve used on this type of device.

Kudos also goes to Motorola for using a 3.1in capacitive screen rather than a resistive one, especially as it’s nice and bright and has a decent resolution of 340 x 480 pixels. Nevertheless, Motorola hasn’t gone quite far enough because unlike HTC with its Hero phone, it hasn’t managed to add multi-touch support – something which you really miss when using the otherwise excellent Android web browser. Also the screen isn’t quite as responsive as we’ve come to expect from capacitance displays, with the result that on some occasions you find yourself dabbing at it a couple of times before it recognises your input.

What we do like, however, is the fact that the Dext uses a standard micro-USB port for charging and syncing, plus there’s a standard 3.5mm headphone port at the top of the handset so you can easily use your own headphones with it rather than the lacklustre ones Motorola supplies in the box.

The 5.0-megapixel camera is also a cut above the rest. It may lack a flash, but it does have autofocus and indoors, under decent lighting conditions, it actually puts in a respectable performance, while outdoors it does a good job of capturing realistic looking colours and plenty of detail. What’s more, it shoots pretty good video too.

As with most of the latest higher-end mobiles, the handset has assisted GPS onboard. There’s no actual navigation software included (although with Google having announced that Google Maps Navigation will be coming to Android V2.0 devices, there’s always the possibility the phone could get this as an upgrade), so for now you’re limited to using plain old Google Maps. The phone also has a digital compass and this can be used in Google Street View to pan the street scene in real time as you move your phone around. Admittedly this feature isn’t really all that useful, but it looks very cool indeed! 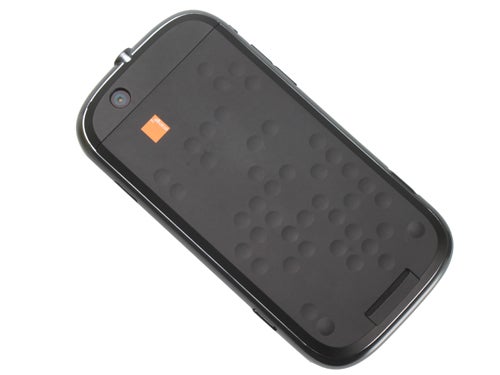 The Dext hardware is based on a 528MHz Qualcomm MSM7201A processor, which is similar to that used in many of HTC’s recent devices. The processor is helped along by 256MB of RAM and 512MB of ROM. There’s also a microSD card slot for adding more storage space for music tracks, movies and other files if you need. For most tasks the phone’s performance is more than adequate, but there is some noticeable slow down when you’ve got lots of widgets open on the home screen. It’s certainly not up to the lightning quick pace of the iPhone 3GS or the HTC HD2, that’s for sure.

As a result of the Motoblur interface additions there’s always plenty of data-pushing and shoving going on with the Dext and this obviously has an effect on battery life. Unfortunately, it’s a rather negative one as in our experience you’ll only get around a day’s worth of use from it before it needs a re-charge (in our in-house test, consisting of two hours mp3 playback with the screen off, two hours video watching with the screen on full, and one hour of web browsing, only 14 per cent of the battery was left – Ed.). However, if you’re not interested in social networking then turn off the Motoblur additions for easily double the battery life. 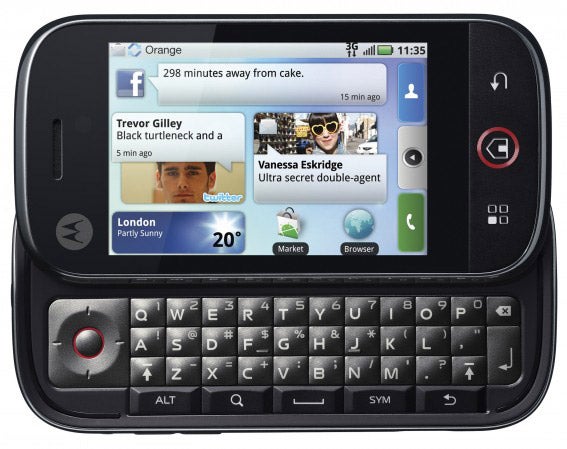 On the plus side call quality was very impressive. Whereas the iPhone demands you position its earpiece right bang in the centre of your ear so you can actually hear callers, the Dext earpiece is so loud that on full volume it almost sounds like a speaker phone. Equally the microphone isn’t as directional as some and is nice and sensitive, so even whispered conversations are not beyond its grasp.


The Dext has a great deal going for it. The capacitance touchscreen is reasonably good, the slide-out keyboard is excellent and the Motoblur social networking apps are a treat to use. However, the lack of multi-touch, ugly design and sometimes sluggish performance means it doesn’t endear itself to you in the same way as, say, the HTC Hero. It’s still a fine handset, but it’s far from being our favourite Android handset. Perhaps Motorola can go one better with the upcoming Droid, or Milestone as it seems set to be called in Europe.