Motorola’s Aura caused a sharp intake of breath from the first moment I heard about it because of its price tag. At £1,300 it is even more expensive than Nokia’s 8800 Carbon Arte. The Nokia was a triumph of style over substance, and so, I have to say at the very outset, is the Motorola Aura. Unlike Nokia’s costly offering the Aura does have something very different about its design, but it is short on features. 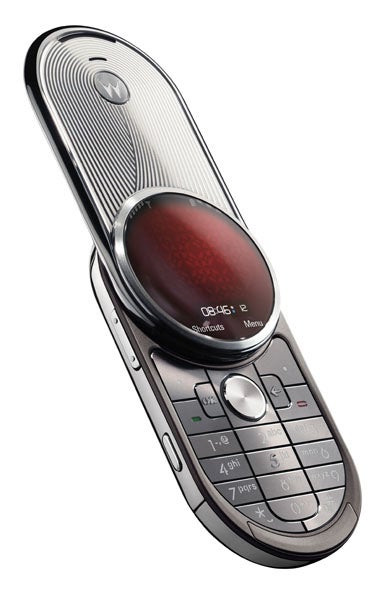 Motorola says the Aura has the world’s first circular display. Err, can’t the company remember its own V70, or the Toshiba G450? Clearly, it can’t.


Anyway, the Aura does have a round display. Furthermore, like the V70, this is a phone with a rotating top section that flips round 180 degrees to reveal the keyboard. This flip mechanism is beautifully smooth. It responds to the merest push from either the left or right side, though I think Motorola is over-egging the custard to suggest that the feel is more like opening a luxury car door than accessing a mobile device.


The mechanism can be seen under a viewing hatch on the backplate and it looks rather like the innards of a watch thanks to its cogs. Various clock-like patterns can be set to pop up on screen as the phone goes into standby mode, and what with the round display you won’t be surprised to learn that Motorola is trumpeting the Aura’s watch-like appearance. It boasts a Swiss-made main bearing and apparently more than 200 parts are involved in the opening mechanism, including 130 ball bearings. 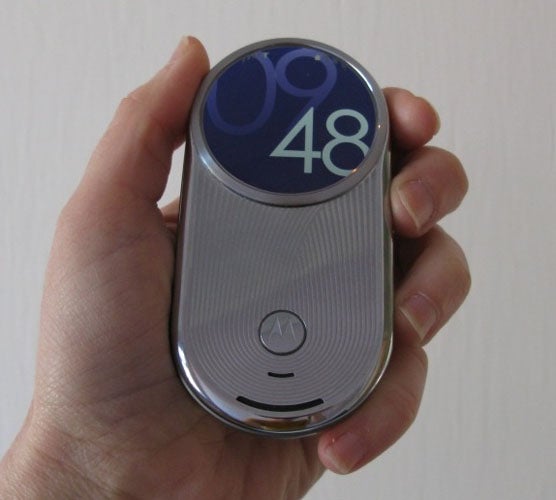 Thanks to its polished steel shell, the Aura feels heavy in-hand (a point confirmed by the 141g weight) and is etched with a rather nice patterning both front and back. It’s a little on the chunky side, too, at 96.87mm tall x 47.6mm wide and 18.55mm thick.


Measuring 1.55 inches and 480 pixels across the diameter, the screen is an excellent one. Its sapphire crystal fascia is very scratch resistant and it does a fair job of presenting information, though on occasions it is irritating. For example, Web browsing is not a very satisfactory experience. Like many other viewing options, (pictures, video) Motorola has to force a rectangular peg into a round hole; the result is often lots of unused space.

There are other irritations, too. The main menu is very irritating to use. Items are laid out in a circle around the perimeter of the display – not unlike the numbers on a watch face.


You use the navi pad to bring menu items into the centre one-by-one. It is a bit tedious that you can only go clockwise or counter-clockwise with left and right presses on the navi pad, rather than being able to skip up and down or rotate the navi-pad under your finger. At least there are some shortcuts you can get at from the left softkey on the main screen.


There are no front buttons and minimal side buttons. You open the phone to take a call, close it to end a call. For everything else you need to open the phone and use the menus. 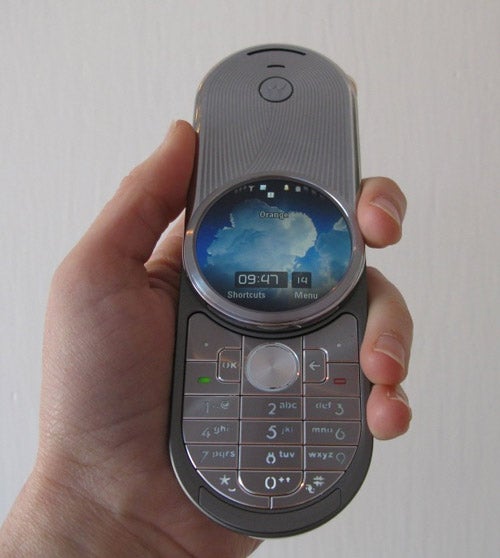 Motorola doesn’t seem to have put the same amount of effort into the keyboard as into the outer casing and swivel mechanism, resulting in a problematic experience. Keys are flat, well differentiated and large, yet still I found the very smooth surface a little lacking in tactile feedback. Another irritation is the lack of a select feature for the navi button. Instead you have to tap a little ‘OK’ button to its left, which isn’t very intuitive.


Specifications are limited, especially when you cast your mind back to the cost of this phone. This is a quad-band handset with no 3G, no Wi-Fi and no GPS.


The camera is a miserable 2.0 megapixel affair. It lacks flash, autofocus or a side button and, though it does have a self timer and multi-shot modes, there is noticeable shutter lag, which means you can’t take photos of anything that moves.


Colour reproduction is not too hot with indoor shots fairly dark and outside the lens is poor at coping with variable lighting conditions.

Much of this could be forgiven on an entry-level handset, but here it is simply not good enough. And, to make matters worse, what you frame in the screen is not what you get in a picture. Even the manual states plainly that the round display means the viewfinder does not show the edges of a photo, and the reality is much worse than you could possibly imagine.


I framed the coloured dish so that it fitted right to the limit of the phone’s screen. In the photo the dish is lost in its surroundings. Ditto the chair, which has surroundings you never normally see in my photo of it. And, because I must have had the phone slightly off square when framing the chair, the photo is tilted. The flowers were framed so that the three of them were at the far reaches of the screen, but in the photo there is a huge amount of unwanted imagery to their left and right.


The camera is a complete disaster. 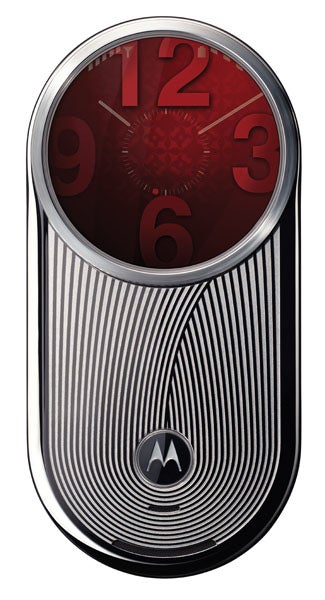 Music playback is also a mixed bag. Quality is reasonable through the provided headset, though I do have to grumble about its microUSB connector to the phone itself, which is shared with mains power. Motorola provides a microUSB to mini USB converter so you can use an existing cable for PC connectivity. There is 2GB of built-in memory and no way to add more. Why, on a phone of this price, Motorola couldn’t have fitted a microUSB slot and provided an 8GB card is a mystery.


Other software not already mentioned includes a calendar, clock, alarm, calculator, to do list, notes taker, a couple of games, voice recorder and video capture to 176 x 144 pixels.


Battery life is at least respectable. Motorola suggests you’ll get 7.3 hours of talk and 400 hours on standby. I was still using the phone from its first charge after three days, but then I did not feel overly encouraged to exploit it hugely during the testing phase.


Motorola says it takes two weeks to produce the Aura and given the quality of the swivel and outer casing I don’t doubt it. But, is it two weeks well spent? One could forgive Motorola for producing this phone if it had a big portfolio of handsets covering a wide range of price points and feature combinations. As it stands, though, the Aura is one of just a few currently available from Motorola and it smacks of a complete misunderstanding of what people are looking for in today’s climate. 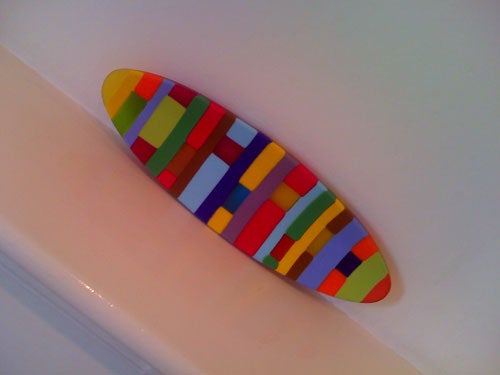 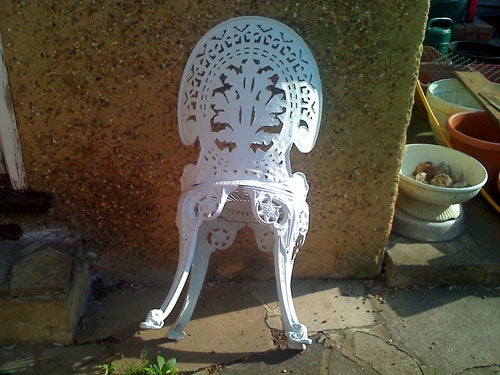 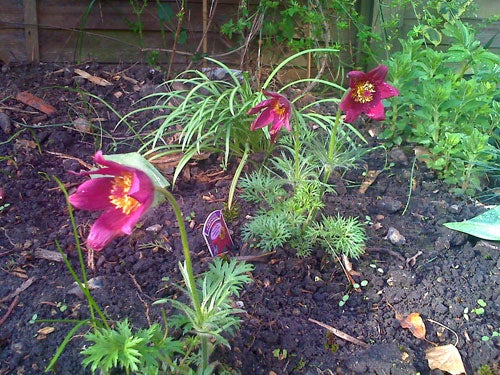