Like having a giant entourage or playing Wembley Stadium, having your own headphone range is a must for today’s giant music acts. One of the latest to succumb to this particular merchandising machine is Motorhead, through the Motorheadphones range of headphones and phone cases.

The Motorheadphones Overkill are in-ear headphones with metal bodies and a design louder than a Motorhead gig. They don’t quite sound as good as Motorhead, though. 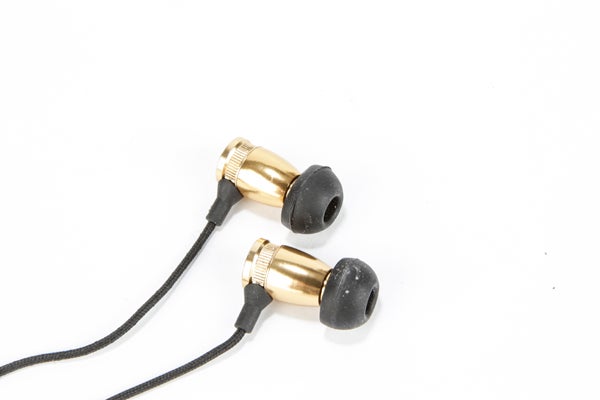 All of Motorheadphones’s earphones and headphones are not timid about showing their rock roots, but the Motorheadphones Overkill are perhaps the most brutish of the bunch. These are earphones fashioned out of metal, designed to look like bullets.

It’s not the first time we’ve seen bullet-inspired buds, but they manage to separate themselves a little by engraving the brand name into the rear of each earpiece. The look seems to be the key consideration here, as we didn’t find them particularly comfortable. 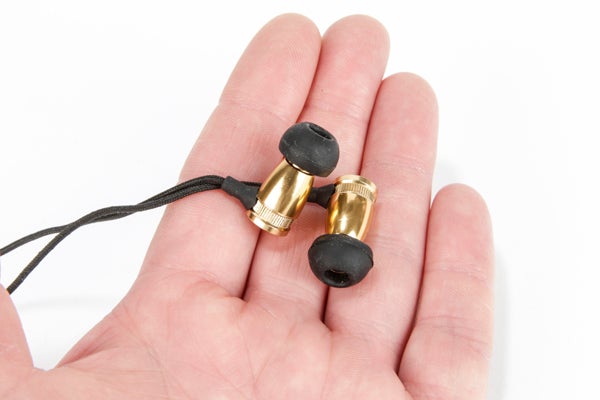 Most in-ear headphones’ comfort level is determined in large part by the quality and type of tips used, but the Motorheadphones Overkill are quite heavy and not particularly well-balanced. They tend to work their way out of your ears, doing so especially quickly if you’re walking around with just the one bud in.

The use of metal earpieces and a braided cable is another attention-grabbing tactic. They are intended to make the Overkill earphones seem more expensive than they actually are. 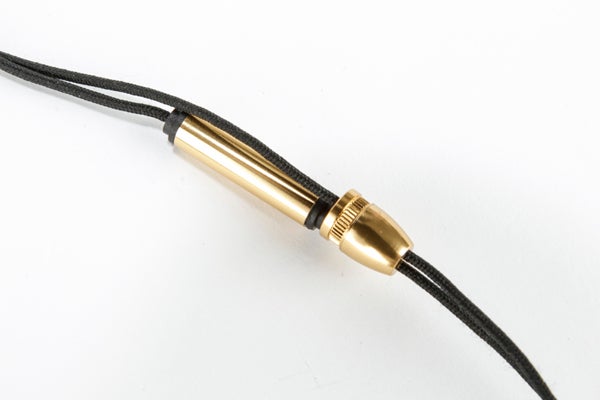 However, it’s offset by some disappointingly shoddy elements. For example, the Motorhead logo on the rear of the earbuds doesn’t look aligned properly, the large metal splitter ingot spoils the braided cable’s tangle-reducing effect and the hands-free housing is horrible. 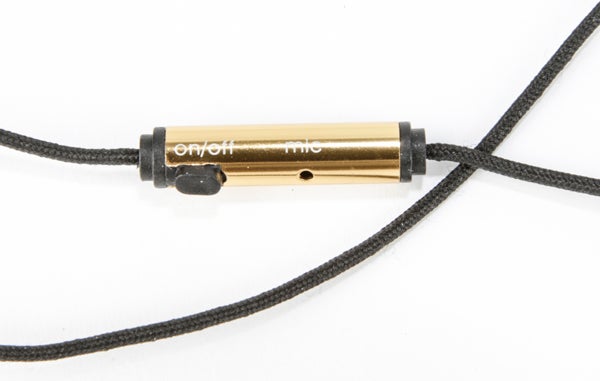 It’s a tacky-looking tube of gold-coloured metal with clumsy inlaid writing and a poorly designed stiff plastic button. These mis-steps start to drag the Motorheadphones Overkill from the uptown pad of the style headphone and back closer to Poundland. It may be quite horrible to use, but at least it is embracing of different types of phones.

Most 3-button remotes are designed for iPhones alone, but this simpler one-button style housing should work with most phones. With an Apple device, one press stops/starts music, two fast forwards to the next track and three skips back a track. 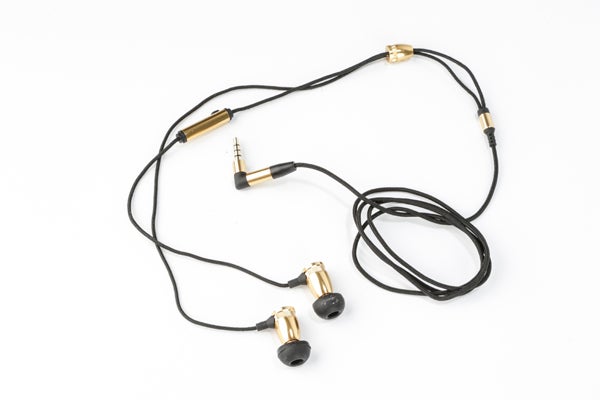 The braided cable of the Motorheadphones Overkill is non-removable, but this is exactly what we’d expect in a £40 earphone. Few sub-£100 pairs offer removable cabling. 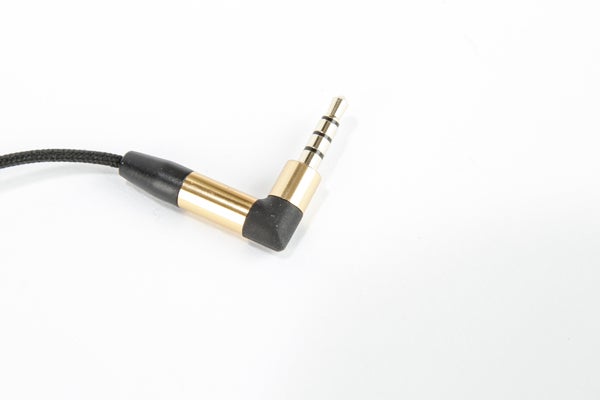 Just as they do with their looks, the Motorheadphones Overkill are out to distinguish themselves from the average earphone. The strategy seems to be similar to that of the Motorheadphones Iron Fist. But where a mid-centric strategy worked reasonably well there, it fails entirely here.

There’s a big focus on the upper-mids in these earphones, giving them quite a distinctive sound that’s out to push the presence of guitars and vocals – those rock staples. However, the treble is way too harsh, giving those same guitars and vocals an unsavoury harsh edge whenever the volume is pushed anywhere near approaching rocking levels. 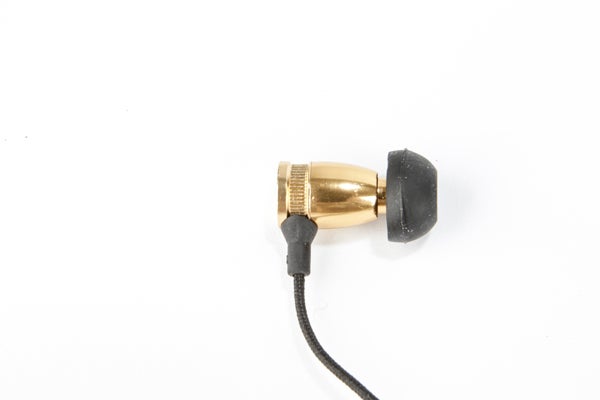 The unbalanced sound does make you want to push the volume up too. It sounds as though there’s something missing from the sound’s make up, due to a lack of presence in the lower-register mid-range.  Bass depth and power is also lacking, something you may not expect in such provocative-looking earphones.

Motorheadphones seems to have the sonic mission of bringing distorted guitars right to the front of any mix in which they feature. And, fair enough, they do it. But they also sound entirely horrible in the process.

For the official Motorhead test, we pumped the classic Ace of Spades through the Overkill. And had to turn the volume down half-way through – they’re the anti-rock of earphones. Wanting to make crunchy guitars sound serrated is one thing, but making them feel like a serrated saw grating across your ear drums is quite another. Whoever tuned these buds deserves a punch in the nose from a Motorhead roadie. 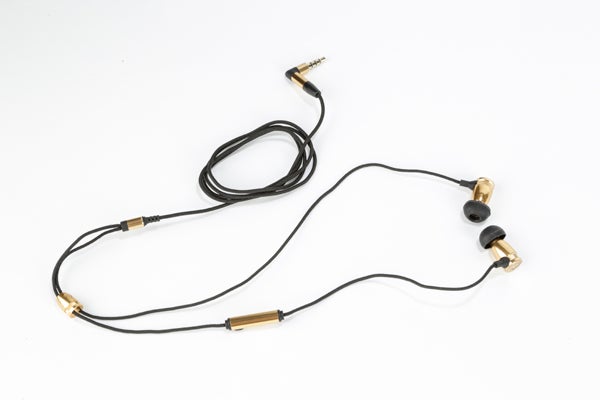 The Motorheadphones Overkill are some of the cheaper style and brand-oriented earphones you’ll find. They don’t cost a bomb, and have a distinctive design that might impress younger onlookers from a distance. However, get up close and actually put the things in your ears and it all goes wrong. Questionable tuning makes these earphones sound a lot worse than pairs that cost a bit less. and the closer you look the more design issues become apparent.

If you’re looking for headphones actually worth owning, we suggest you try our best headphones 2013 round-up.