What is the Moto Z2 Force?

On the market for a top-spec phone that won’t shatter to smithereens after its first accidental drop? Then the Moto Z2 Force may be the phone for you.

The Moto Z2 Force is the latest rugged handset from Motorola. It aims to offer buyers all the specifications of a 2017 flagship, including a dual-sensor rear camera and über-quick Snapdragon 835 CPU, but without one of the crack- and scratch-prone glass backs that are currently in vogue – curse you, Galaxy S8 and iPhone X.

Add to this its Mods system, which lets you add cool peripherals like a 360-degree camera to the Z2 Force’s back, and it sounds like a seriously appealing little package.

However, issues with its battery life, camera and screen mean the Moto Z2 Force comes with a few too many annoying compromises to reach true smartphone greatness. 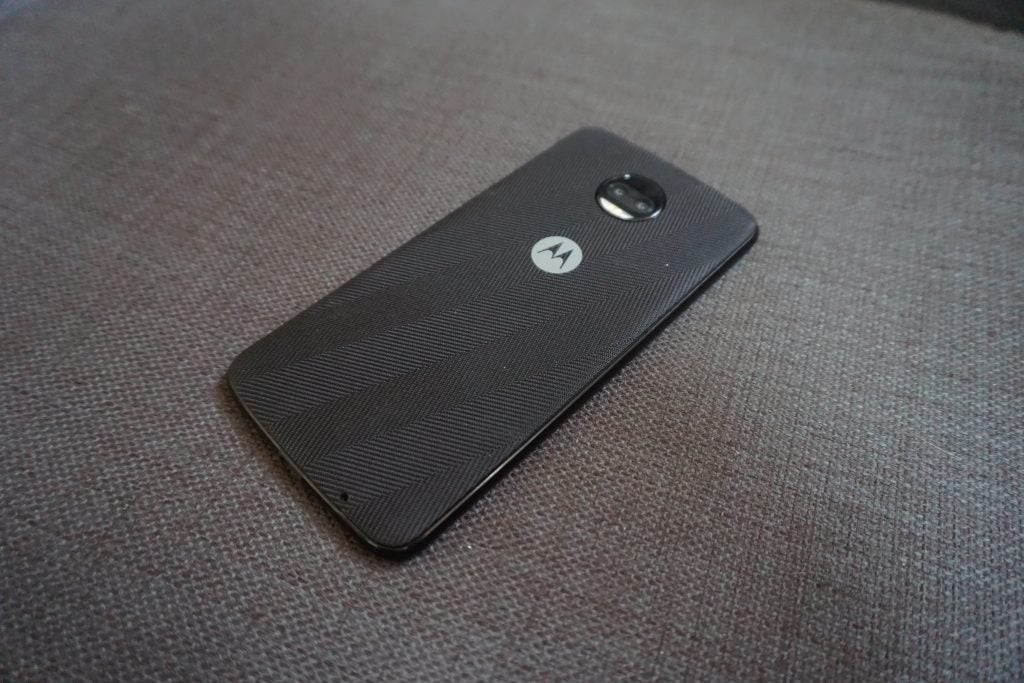 The system lets you add new functions to the Moto Z2 using a series of optional Mods, which magnetically clip onto the phone’s rear. The Mods are available for purchase on the Motorola store and include a nifty 360-degree camera, short-throw projector, gaming controller and battery pack.

The 360 camera is a particularly nice addition that went down a blast at a wedding and when out and about with friends – though considering its £300-plus price tag you’d hope for it to impress.

The basic rear cover that comes with the phone doesn’t add any new features, but sells the Moto Z2 Force’s key feature: its rugged, crack-resistant design.

The cover has the same textured, almost fabric-like finish as past Motorola phones, and coupled with its 7000-series aluminium unibody gives the phone a premium, durable feel. Having accidentally sent the Z2 Force flying across a wedding dance floor, I can also personally attest there is some truth to Motorola’s Moto Shattershield promise, which guarantees the screen will not crack for four years. 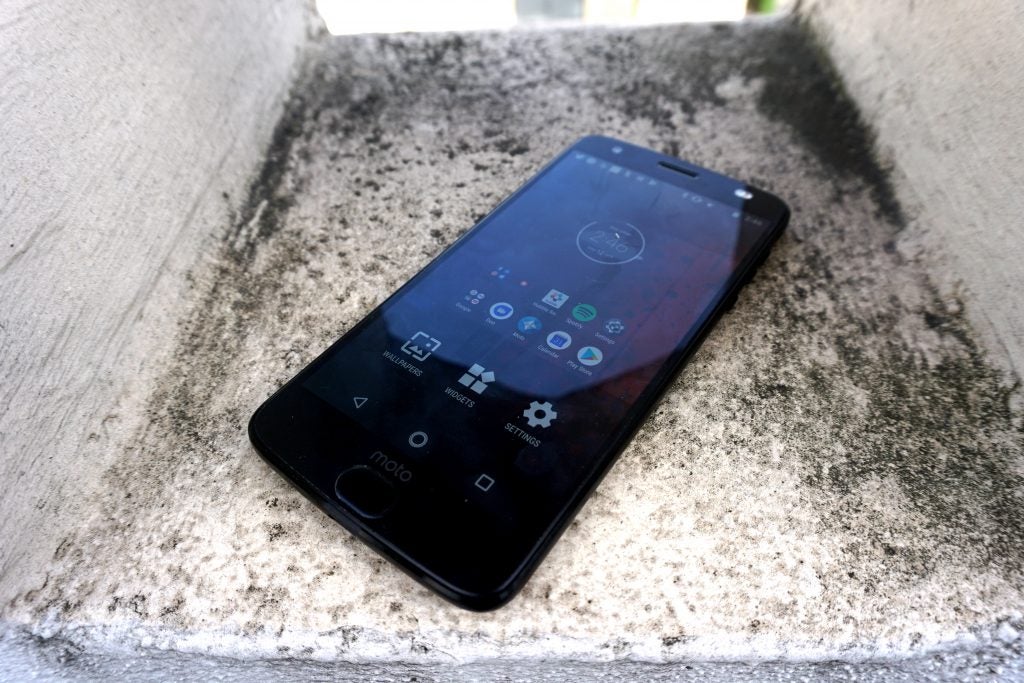 This dance-floor disaster – I’d gotten overexcited that the Beastie Boys’ (You Gotta) Fight for Your Right (to Party!) was playing – saw the Moto Z2 Force survive an encounter with a wooden floor, followed by a minor stamp by an overzealous bridesmaid. Luckily she wasn’t wearing stilettos. I can’t think of another top-end handset that could survive the same ordeal, though it did result in a few minor scratches.

Outside of this the Z2 Force has all the trimmings of a 2017 flagship, featuring a front-facing fingerprint scanner below its screen, a USB-C charging port on its bottom, and a microSD slot on its side that’ll let you add a further 2TB to its 64GB of built-in storage.

My only quible with the Z2 Force’s design is that, without a proper Mod attached, its ultra-thin dimensions make it a little less comfortable to hold than competing phones, such as the Galaxy S8.

Measuring in at just 6.1mm thick and featuring oddly square sides, the Moto Z2 Force can awkwardly jut into your hand. It also quickly becomes slippery to hold when wet – though you’ll want to avoid serious aquatic encounters anyway, as bizarrely Motorola has only designed it to be splash-resistant.

On paper the Moto Z2 Force’s screen ticks all the right boxes. The 5.5-inch display has an impressive quad-HD 1440p resolution that should look sharp, and the use of Super AMOLED tech means blacks should be wonderfully inky and colours luxuriously rich.

Generally the display delivers on its promise. The 1440p resolution does looks crisp, and you’ll struggle to notice any individual pixels. Maximum brightness levels are also solid and mean that, generally, the screen remains readable in everything but direct sunlight, which is an environment in which all phones struggle. Blacks are also wonderfully inky and viewing angles are adequately wide. 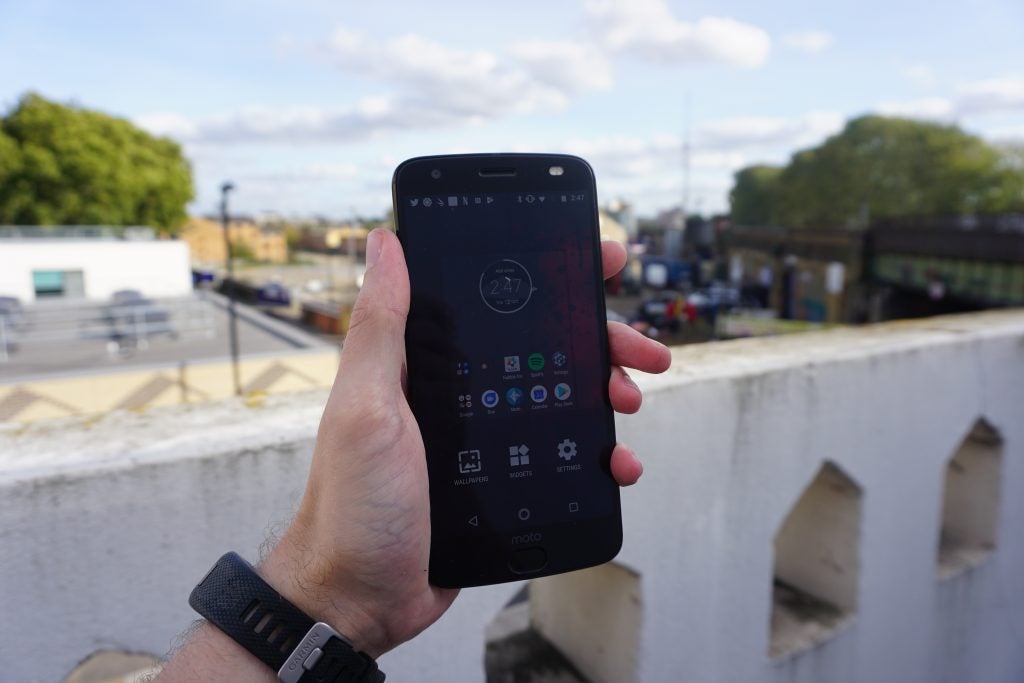 Colour temperature and white levels are a wee bit off, however. The Moto Z2 Force comes with two screen options: vibrant and regular. Out of the box it’s preset to the Vibrant setting, which works to make colours look richer. This should be fine, as most people don’t do serious photo editing work on their phone, but on the Moto Z2 Force it makes colours look a little too warm for my liking. Reds are slightly distorted, though not to the point they look pink, and in general the screen just looks a little off. White levels also have a slightly yellowish tinge that makes the screen look a little sub-par at this price point.

Flipping to the Regular mode does noticeably help things, making colours look more natural and improving the cleanliness of whites, but the screen still isn’t perfect. In this mode it looks like Motorola has gone to the opposite end of the spectrum and made colours a smidgen too cool. Ideally I’d have liked an option in between, or a colour temperature slider that would let me take more granular control of the screen’s settings.

For the last few years Motorola phones have, in my mind, offered the best representation of Android you’ll find outside of Google’s own Nexus or Pixel handsets. This is because Motorola takes a very light touch to the OS, loading it with a bare minimum of extra services, applications and features, and leaving the settings menu and UI pretty much untouched.

As a result the version of Android Nougat loaded onto the Z2 Force looks at first glance like the stock version. Going through the apps menu I found almost no duplicate services or unwanted third-party bloatware. What little additions Motorola’s made are also generally positive or unobtrusive.

Moto Display is a particularly positive addition that instructs the screen to intelligently display alerts and information when you look at the phone in sleep mode. It saves battery by only powering the specific pixels needed to display the info. Though small, it makes for a nice peak view when you only want to check the time or see why your phone was buzzing without fully powering it up.

I’m also pleased to see Motorola has already confirmed an upgrade to Android Oreo, which adds a layer of future-proofing to the Moto Z2 Force’s software. Performance is one area in which the Moto Z2 Force doesn’t compromise. It’s powered by Qualcomm’s latest Snapdragon 835 processor – clocked at 2.35GHz – an Adreno 540 GPU and 4GB of RAM (European spec).

Hardware fanatics will likely bemoan the fact it only has 4GB of RAM, when cheaper phones like the OnePlus 5 have 6GB, but at this point any more is overkill. There aren’t many apps that’ll stretch the Moto Z2 Force’s specs and with everyday use it’s lightning fast.

Multi-tab web browsing is pleasingly chug- and stutter-free, and the Z2 Force opens applications in milliseconds. Even demanding 3D games, such as Riptide GP2, load close to instantly and run smoothly. The phone does heat up with prolonged sessions, but not to the point I noticed any CPU throttling. The the lack of bloatware and superfluous changes to Android also means the Z2 Force is blissfully free of bugs, and I’m yet to experience an application crash or freeze.

The Moto Z2 Force’s synthetic benchmark scores mirrored my real-world experience. You can see how the Z2 Force stacked up against the Galaxy S8 in the table below.

The phone’s speakers and microphone are also adequate. The speakers aren’t on a par with the HTC U11’s, which is currently the loudest phone on the market, but they’re more than good enough for conference calling. The microphone performs well and is more than sensitive enough to take and make calls, even when on busy London streets.