If you have a Moto G7 Plus, or recent Motorola One-series smartphone, there's little reason to upgrade to the Moto G8 Plus. But for those with older handsets, the G8 Plus remains a solid mid-range Android device that gets nearly all the basics right. Notable shortcomings include a camera that could do with more work and a RAM count that's low by today's standards.

The Moto G8 Plus is the latest flagship affordable smartphone from Motorola. Like past Moto G phones it aims to offer buyers premium specs and features traditionally seen on significantly more expensive Android phones.

However, this time round its place in the market is a little trickier to gauge and there are lots of best mid-range and best cheap phones around. Motorola’s muddied the waters by releasing a steady stream of One-series phones, like the Motorola One Action and Motorola One Zoom, which target the same segment of the market as the G8 Plus. The Moto G7 Plus came out less than a year ago and remains an impressive device in its own right.

Xiaomi, Honor and Samsung have all also been releasing a steady stream of great phones targeting the same price point. You may justifiably be wondering what extra features the Moto G8 Plus brings to the table to differentiate itself.

After a week with the phone, sadly, my answer is not a lot. But by getting all the basics right – and offering a near untouched Android install – it remains a solid and generally reliable affordable phone nonetheless. 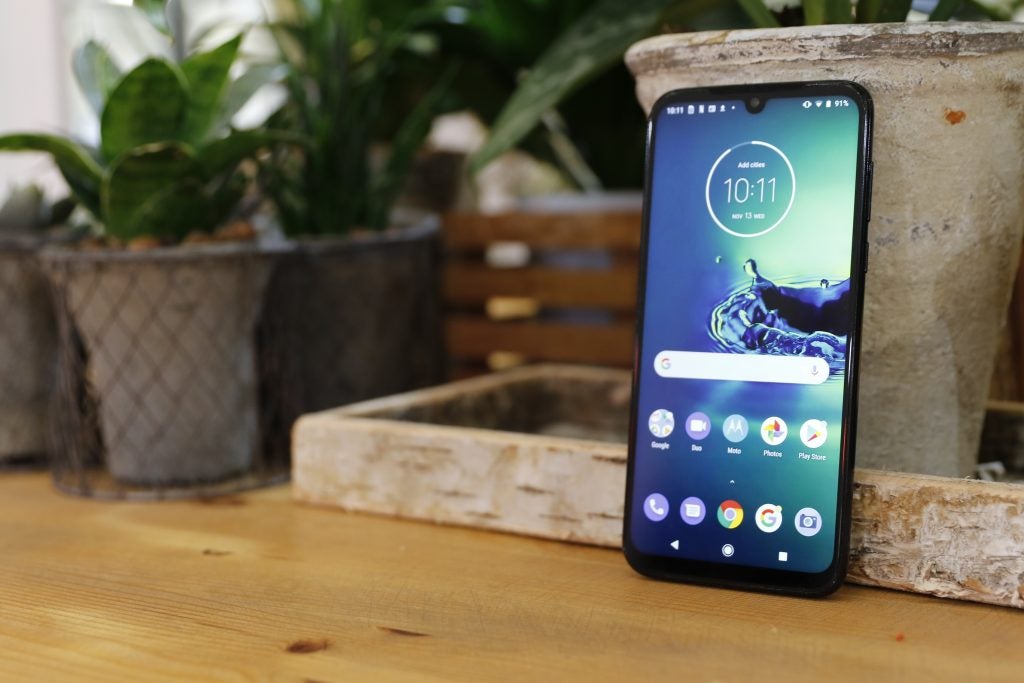 The Moto G8 Plus follows the same design philosophy as the Moto G7 Plus. It features a mixed plastic and glass chassis, with an alluring semi-translucent colouring that makes it look a little like a tweaked Huawei P30. Round front it even has the same teardrop notch, which houses a 25-megapixel front snapper.

Outside of its colouring the only other major design difference between it and the Moto G7 Plus is that it has a rectangular camera housing on its left. The G7 Plus has a central, circular housing.

The chassis feels fairly premium and was robust enough to survive an accidental direct encounter with a pavement unscathed. It doesn’t come with a firm IP water resistance rating so you’ll want to avoid it having any aquatic adventure.

The design also ticks all the right boxes when it comes to functionality. Round back you’ll find a circular fingerprint scanner that worked great 99% of the time. The only time I had any issues with it was when trying to use the scanner in drizzle.

The USB C port and inclusion of a 3.5mm headphone input are both welcome features you’re not guaranteed to find on competing, similarly priced phones. The microSD card slot makes it quick and easy to upgrade the 64GB of onboard storage.

The phone’s slightly chunky 9.1mm thickness is the only design factor hinting at its mid-range price. 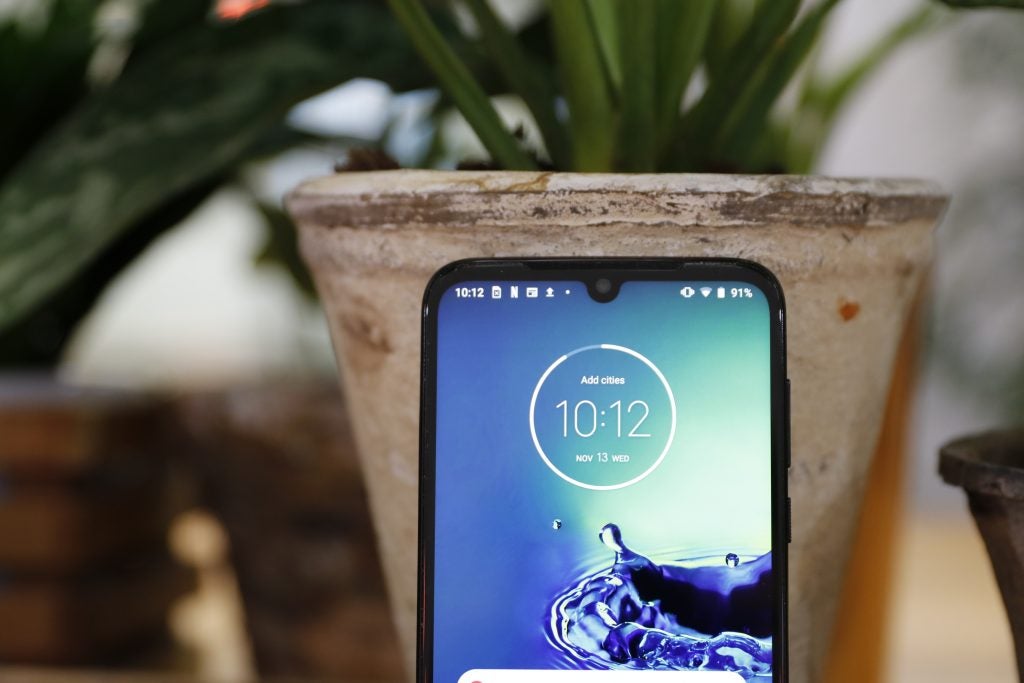 Powering up the phone you’ll be treated to one of the G8 Plus’ best features – it’s 6.3-inch screen.

The IPS panel doesn’t offer the deep blacks you’ll find on more expensive phones’ OLED screens, but it’s still a cut above most competing affordable and mid-range handsets when it comes to display quality.

The 0.1 black level and 197nits max brightness aren’t HDR but they give the screen a solid 1612:1 contrast ratio. In English, this means the screen is suitably bright and immersive for Netflix binging and gaming. The immersiveness is helped by the Moto G8 Plus stereo speakers, which are best in class for this price. Audio is suitably punchy and loud enough for streaming in bed.

Colour gamut coverage is also solid across the common sRGB (98%), DCI-P3 (85%) and Adobe RGB (72%). The only slight disappointment is that it has a slightly cool 7465K colour temperature that’s a fair way from the 6500k ideal. This means colours, can look a little muted, though this is an issue on most phones this price. All-in-all the screen is great for the money. 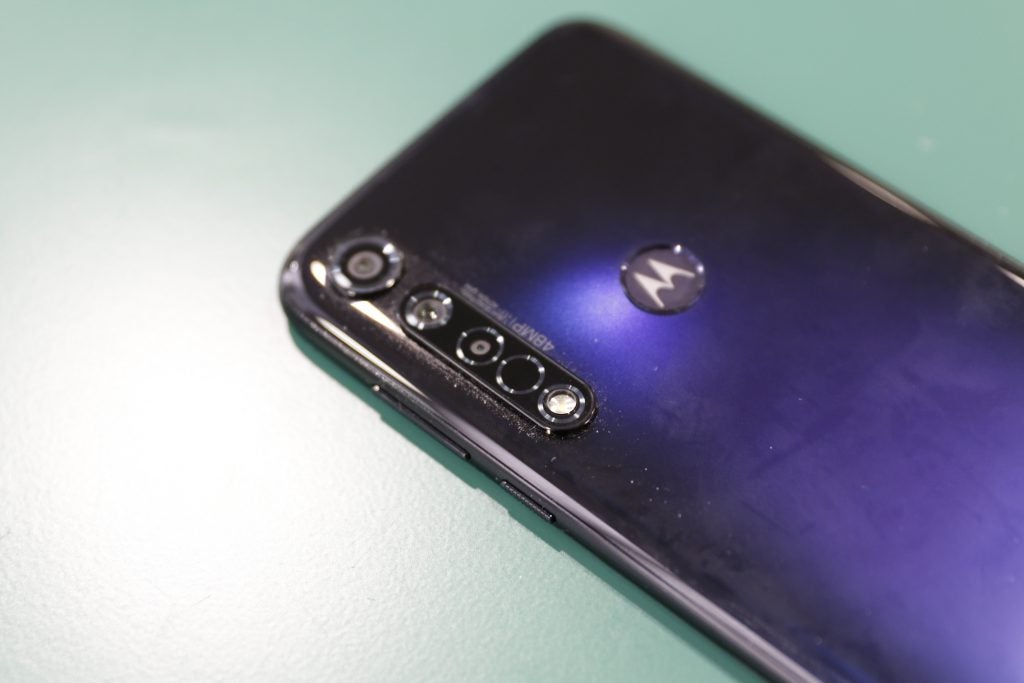 Camera quality is a key area Motorola’s been using to differentiate its mid-range phones. This is most evident on its latest Motorola One Zoom and Motorola One Action smartphones. Both attempt to differentiate themselves by offering triple-sensor rear camera setups that, on paper, are similar to significantly more expensive phones.

The third depth camera also does a reasonable job creating a bokeh effect when using the camera’s portrait mode. This where the foreground/subject of the photo is in focus, while the background is slightly blurred.

Low light, as ever, things get a little pixellated, even when using the phone’s dedicated night mode, but this is standard for a phone this price.

I’m a little more perturbed about how the secondary wide angle has been setup. The wide-angle doesn’t actually take wide-angle shots. Instead, it’s used to shoot GoPro style videos. Specifically it lets you capture horizontal videos while holding the phone vertically, which could be useful in certain situations, but is nowhere near as handy as a full fat wide angle.

You can see a selection of photos taken on the Moto G8 Plus below and if camera is key decision-maker when choosing a phone see our best camera phone guide. 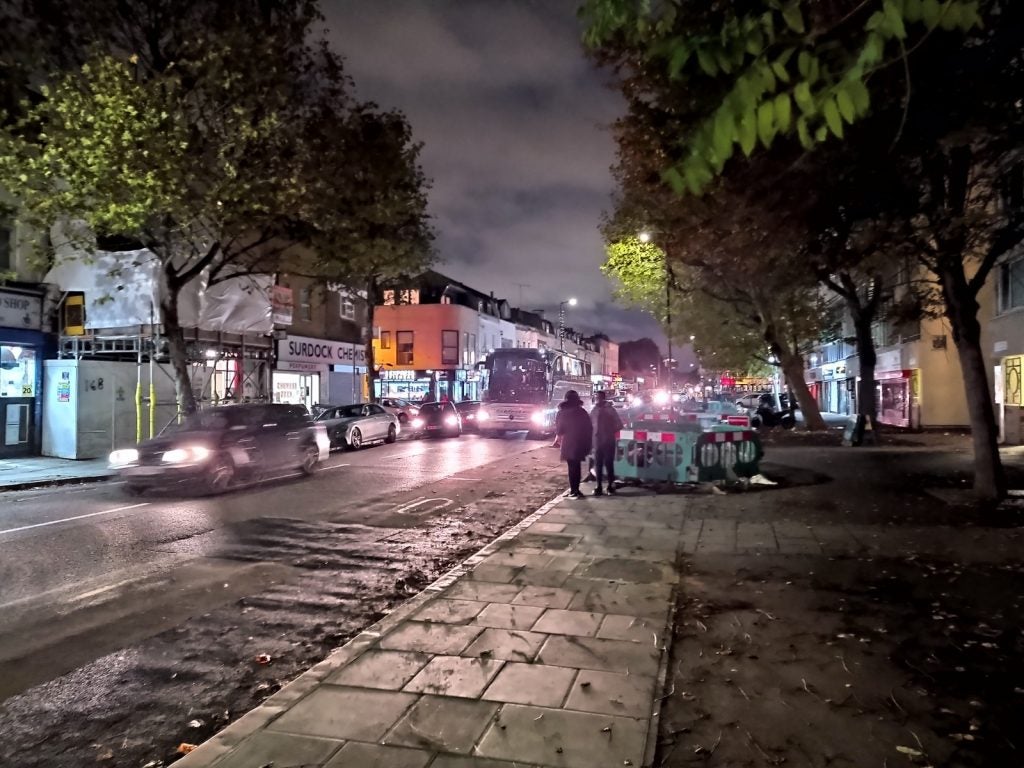 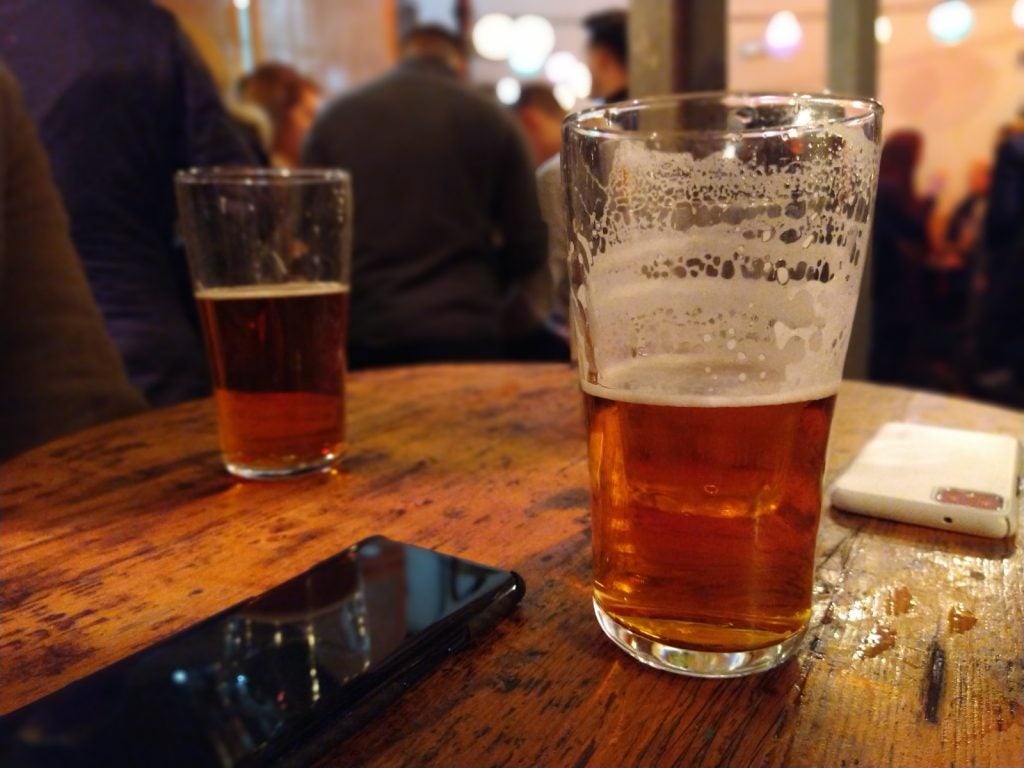 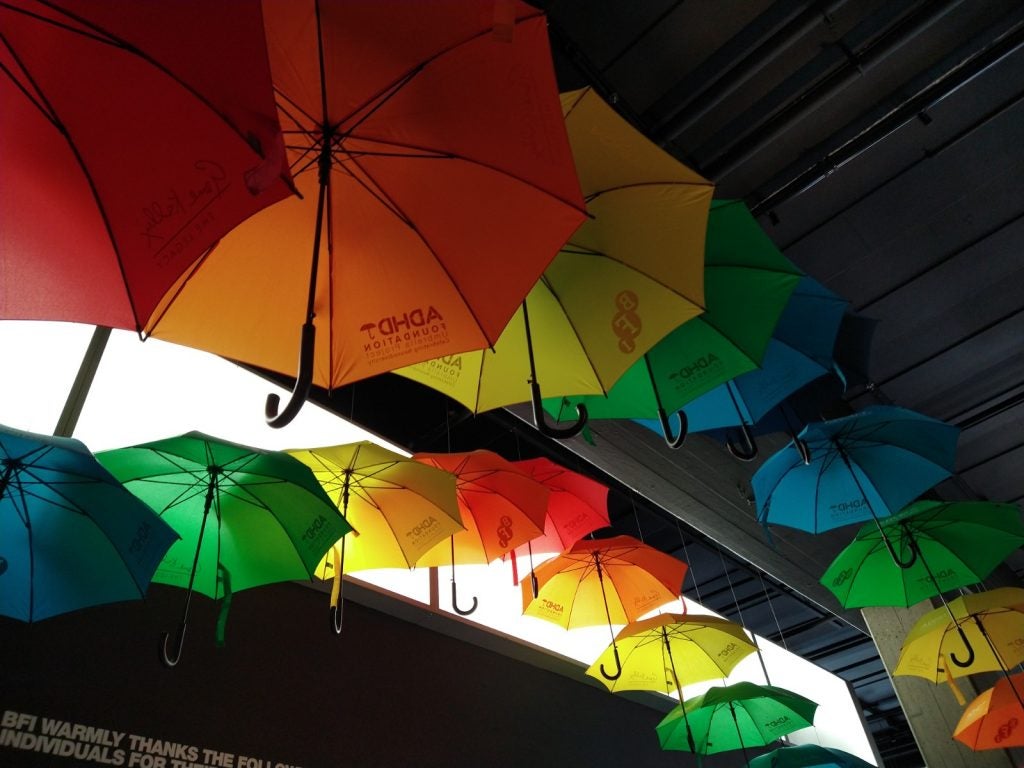 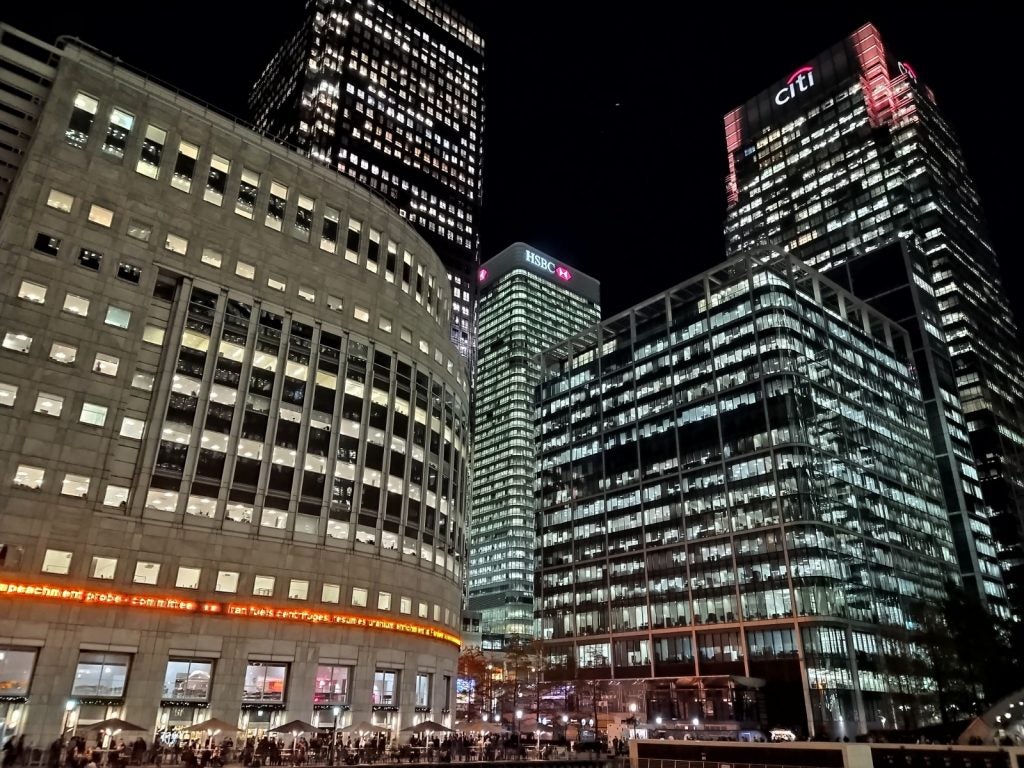 The Moto G8 Plus is powered by sizable 4000mAh battery. With regular use I found the phone easily lasts around a 1.5-2 days use. This entailed using the Moto G8 Plus as my primary smartphone.

On an average day this would see me listen to music on my morning and evening commute, regularly check incoming messages and my social media feeds, sporadically browse the web and take and make a few calls on the Moto G8 Plus. This is excellent by today’s standards. Most phones still struggle to make it past the day and a half mark with average use.

The phone also dealt with demanding processes, such as video streaming and gaming, pretty well. Looping video on Netflix with the screen locked to 150 nits the Moto G8 Plus dropped an average of 6-8% of its charge per hour. Playing demanding 3D games, such as PUBG, the average discharge rate was around 14-16% per hour. These are solid figures by today’s smartphone standards.

The only downside is that the Moto G8 Plus is a little sluggish when it comes to charge speeds. The phone technically has 15W Fast Charging, but in general I found it takes over an hour and a half to get the phone from 0% to 100%.

The Moto G8 Plus’ performance is a similar story. The mid-range Qualcomm Snapdragon 665 CPU and 4GB of RAM aren’t flagship level specifications, but they’re more than powerful enough to run most Android apps. I was able to play demanding 3D games without noticeable lag and do minor photo touch up work in Pixlr without any serious performance blips.

I only had issues when multitasking with multiple demanding processes running. Here the low RAM count became an issue and there were minor slow downs and performance glitches. 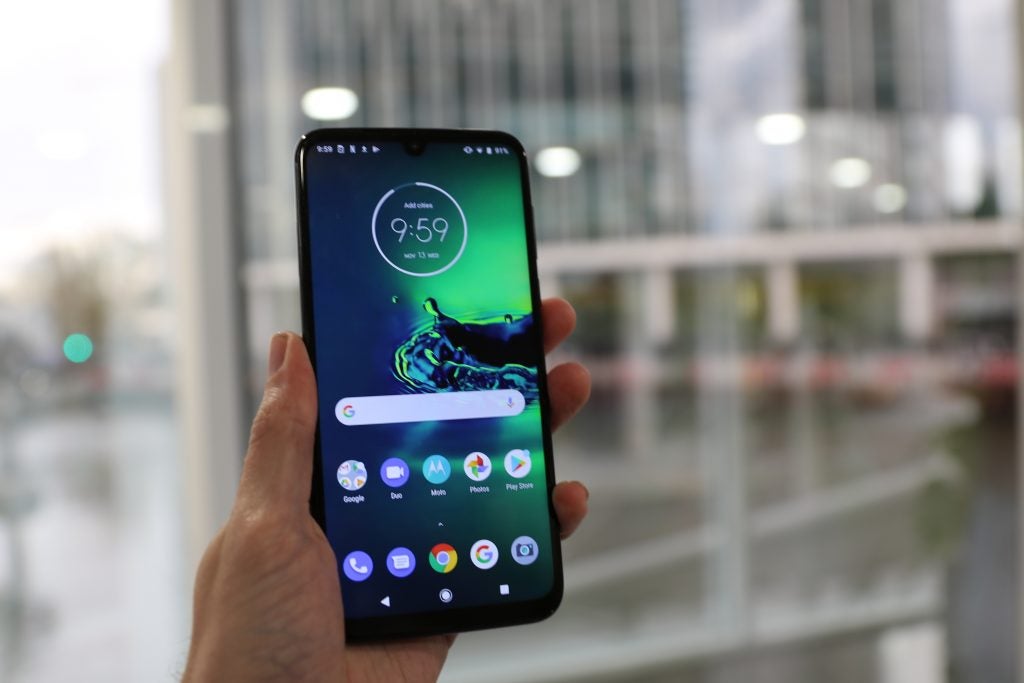 You want good value for money

Moto G devices have long been some of the best value choices in the Android space and that’s still the case here.

You have a Moto G7

Motorola didn’t upgrade too much for the G8 Plus so if you have the previous gen model there’s little here to get you excited about an upgrade.

If you have a Moto G7 Plus, or recent Motorola One-series smartphone then there’s little reason to upgrade to the Moto G8 Plus. But, if you are on an older phone, then it remains a solid mid-range Android phone that gets nearly all the basics right. The only serious shortcoming is that its camera could do with a little work and its RAM count is a little low by today’s standards. 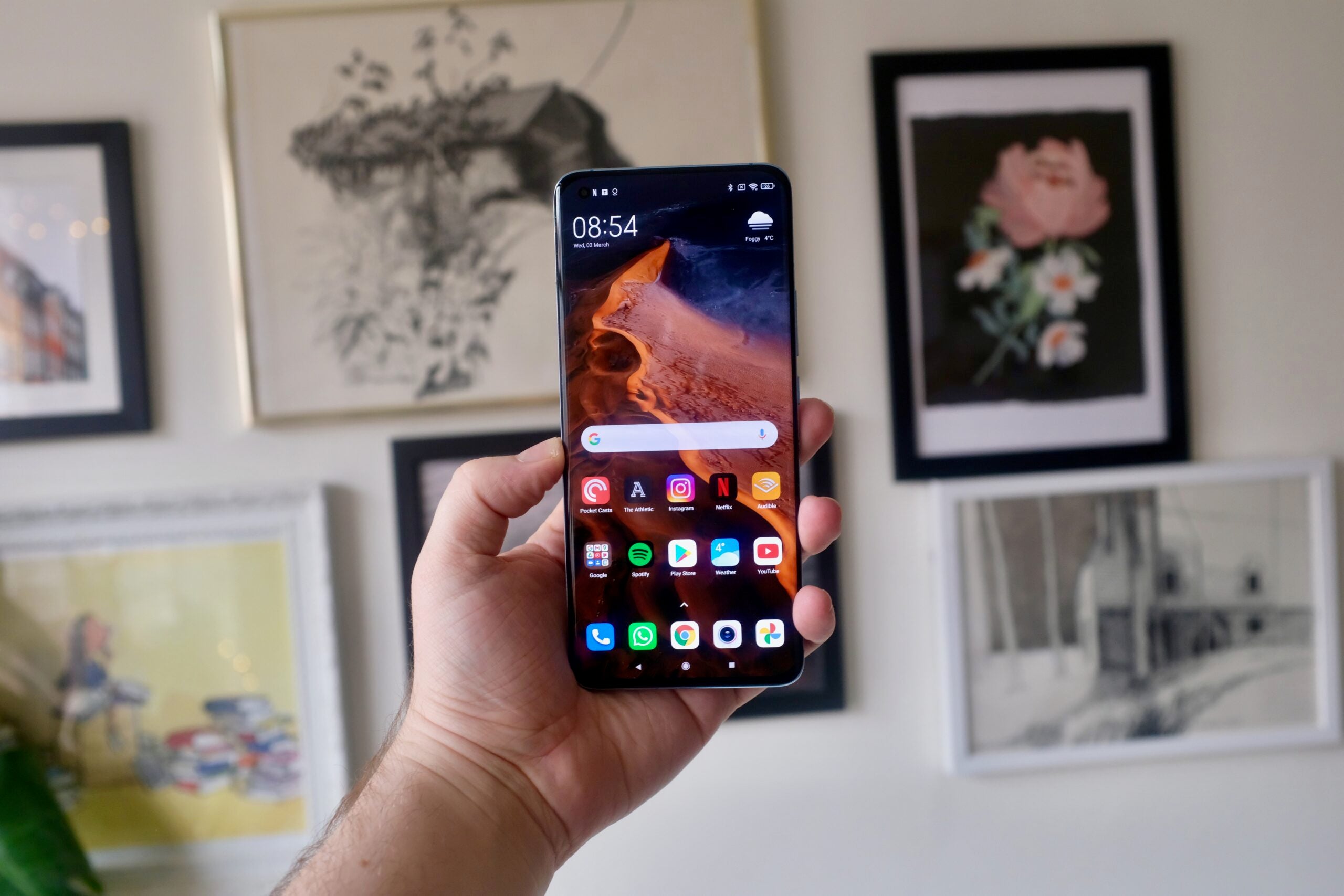 Is Motorola G8 Plus waterproof?

This isn’t a waterproof phone, however Motorola says it has ‘water-repellent’ coating

Is Moto G8 Plus dual sim?

There is a dual SIM version of the Moto G8 Plus

You won’t find 5G support on the Moto G8 Plus