The Moto G7 Play offers amazing value for money and could be a great crash phone or choice for parents with accident-prone kids in need of a smartphone. It features a robust design, reasonable battery life and near untouched version of Android 9. The only downside is that for a mere £40 more you can pick up the Moto G7 Power, which has a nicer design, is more powerful and features a giant battery that'll easily smash through two days use.

What is the Moto G7 Play?

Like its predecessor, the Moto G7 Play is the cheapest option in Motorola’s latest wave of affordable G-series smartphones. It sits below the upgraded Moto G7 Plus , vanilla Moto G7 and battery-focused Moto G7 Power.

In many ways it continues the grand legacy set by its predecessors, such as the stellar Moto G6 Play. Featuring a near unskinned version of Android and some specs you’d normally only see on more expensive handset, the Moto G7 Play is undoubtedly fantastic value for money.

But there’s one key thing holding it back from being the no-brainer purchase it should be for buyers on a budget: it only has 2GB of RAM.

This small omission would be forgivable given the phone’s insanely low price, but the with better specced power only costing £30 more and offering significantly better hardware, its appeal is tarnished.

As a result, while the Play is a solid budget smartphone that’s more than good enough for basic use, we’d recommend those that can pay the little bit extra and pick up the Moto G7 Power. 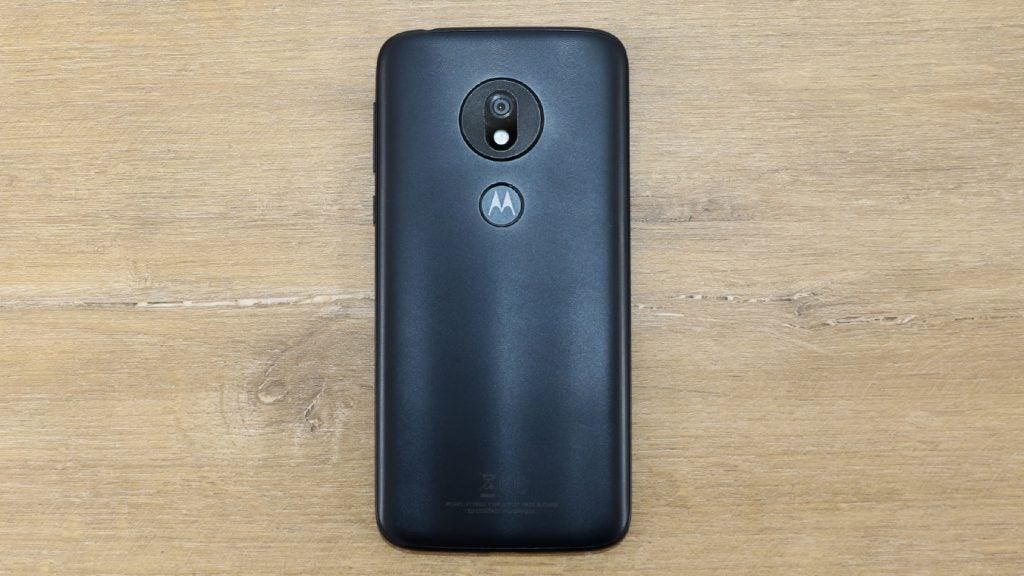 The Moto G7 Play has a completely different design to its siblings. For starters, it has a plastic – not mixed metal and glass – design. The only similarity design-wise is the circular fingerprint scanner on the phone’s rear, which is marked with a Motorola logo.

The end result is a phone that looks and feels a lot more like a Moto G6, than one of Motorola’s latest handsets. The design feels well built and comfortable in the hand, but it certainly isn’t as premium-feeling as its G7 siblings.

The phone also doesn’t have the custom nano-coating seen on its more expensive siblings, or any form of IP water resistance-rating.

Thankfully the G7 Play design otherwise ticks all the right boxes. The fingerprint sensor is intelligently placed and suitably nippy. After setting it up, while it’s not the fastest around, it for the most part worked and I never had any issues using it to unlock the phone.

The USB C port on its bottom is standard at this point, but the appearance of a 3.5mm jack on it’s top is a welcome addition that’s becoming increasingly rare. It means you’ll still be able to use cabled headphones and won’t have to worry about investing in an expensive wireless set to listen to music on the go. The microSD card slot also makes it easy to upgrade the G7’s in-built 32GB of storage, as and when you need to.

The speakers aren’t powerful enough to comfortably listen to music on, but they’re fine for Netflix streaming and lightweight gaming. The only downside is that they can occasionally sound a little tinny, though this is a common problem on affordable smartphones. 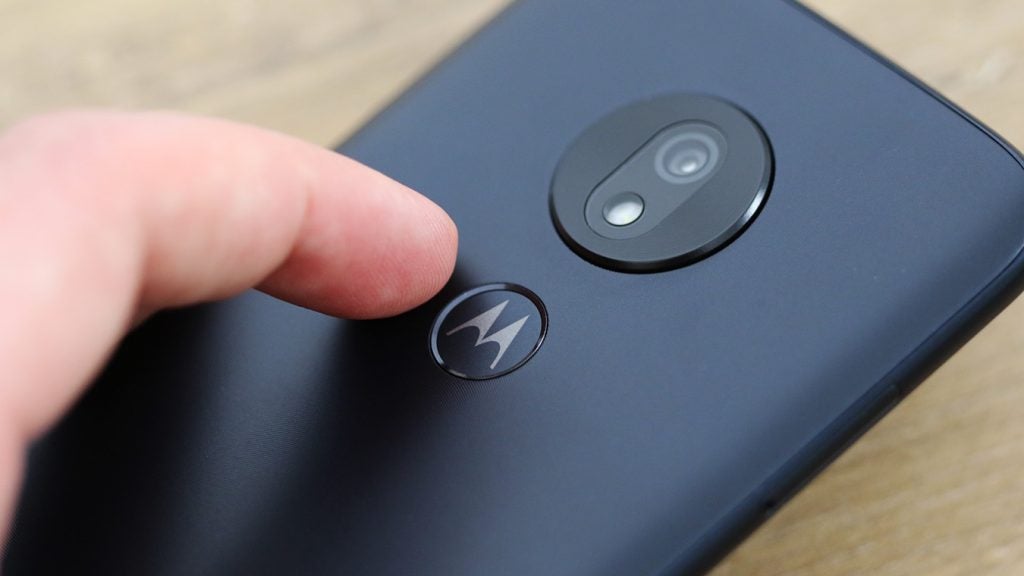 The Moto G7 Play comes loaded with a 5.7-inch HD+ resolution panel. This makes it smaller and lower resolution than the Moto G7 and Moto G7 Plus. It also has a larger notch, which takes up a good chunk of the screen’s top.

The LCD screen isn’t terrible and is more than sharp enough for day-to-day use, but the specs are a smidgeon lower than what you’ll find on competing sub-£200 phones. Both the Xiaomi Mi A2 and Honor 10 Lite have larger, clearer, higher resolution panels.

That said, it is at the very least usable and given the G7 Play’s price, these issues are to be expected – display quality is usually the first thing that’s cut when companies design cheap phones.

Max brightness is good enough to ensure the phone remains legible in everything but direct, bright sunlight.

Moto G phones use of a near untouched version of Google’s Android operating system has been a key selling point since Motorola launched the line many moons ago.

This is a big differentiator in the affordable market, where companies like Honor and Xiaomi seem hell bent on loading handsets with useless, intrusive skins full of bloatware and duplicate apps. The clean install also means it’s one of the only affordable phones around with a guaranteed upgrade to the next version of Android. 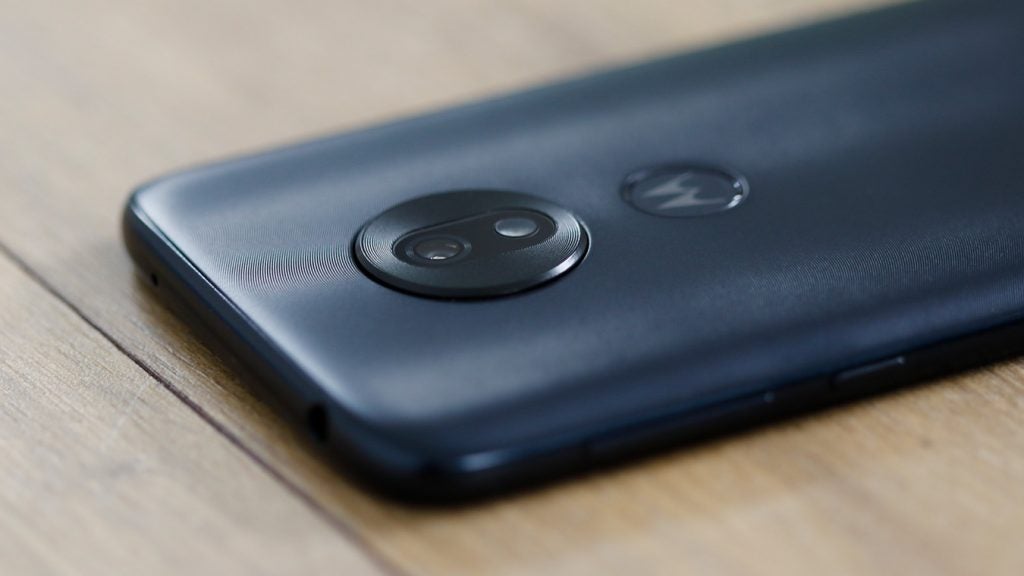 The G7 Play features the same Snapdragon 632 CPU as the Moto G7 and Moto G7 Power, but it’s backed up by a piddly 2GB of RAM.

A few years ago 2GB RAM on a budget phone would have been ample, but these days, thanks to the rise of increasingly demanding games it’s a little on the low side and means the “Play” branding is a little ironic. There’s no NFC onboard so don’t expect to be paying with Google Pay.

General web browsing and video streaming works fine, but intensive gaming is beyond the G7 Play. Running games such as PUBG and ARK: Survival Evolved occasionally stutter, even with the graphics set to low.

Multi-tab web browsing also led to some shutters and for the most part the G7 Play felt a fraction of a second slower than its siblings. Considering the price this isn’t a deal breaker, especially when the phone works fine for day-to-day tasks, but when you consider the Power has twice the memory and costs only a fraction more, it is a minor annoyance.

The G7 Play’s synthetic benchmark scores reflected my real world findings. You can see how it scored in the table below.

Camera tech is a key area most affordable phones struggle to compete in. This remains the case with the Moto G7 Play, which has a basic 13-megapixel, f2.0 aperture rear and 8-megapixel front camera setup.

The hardware isn’t anything to write home about and a far cry from the dual-lens setup you’ll find on the more expensive Moto G7 Plus, which also has OIS (optical image stabilisation). For everyday use the camera works okay.

Snapping photos during the day, photos are good enough for basic things, like sharing on social media, but if you want to be an instagram star, there are better options available, even in the low end of the market.

The autofocus and shutter speed are key annoyances. In regular light they work fine, though there is still occasionally a noticeable delay between when you press the on screen shutter button and a photo is actually taken.

But it both are noticeably slower than the competing Xiaomi Mi A2, which has one of the best cameras in the low-end of the market.

The lack of a second sensor means the portrait mode isn’t great. The portrait mode works to digitally create a bokeh shot where the subject is in focus but the background is blurred. On the small phone screen it looks ok, but blow portrait shots up or zoom in and you’ll find a lot of aberrations, where the border between the subject and background are distorted.

Low light performance also isn’t great. Taking photos in even moderately dim conditions the autofocus slows to a crawl and images suffer from noise and pixelation. Being fair to Motorola this is an issue you’ll find on every phone this price, so we can’t slam the Moto G7 Play too hard for it.

The lack of stabilisation means video shot on G7 Play will be shaky even if you’re fairly steady handed, and once again won’t look great if taken in low light.

The front 8-megapixel camera is a similar story. It’s fine for the occasional selfie and taking video calls in decent light but fairly useless in low light. 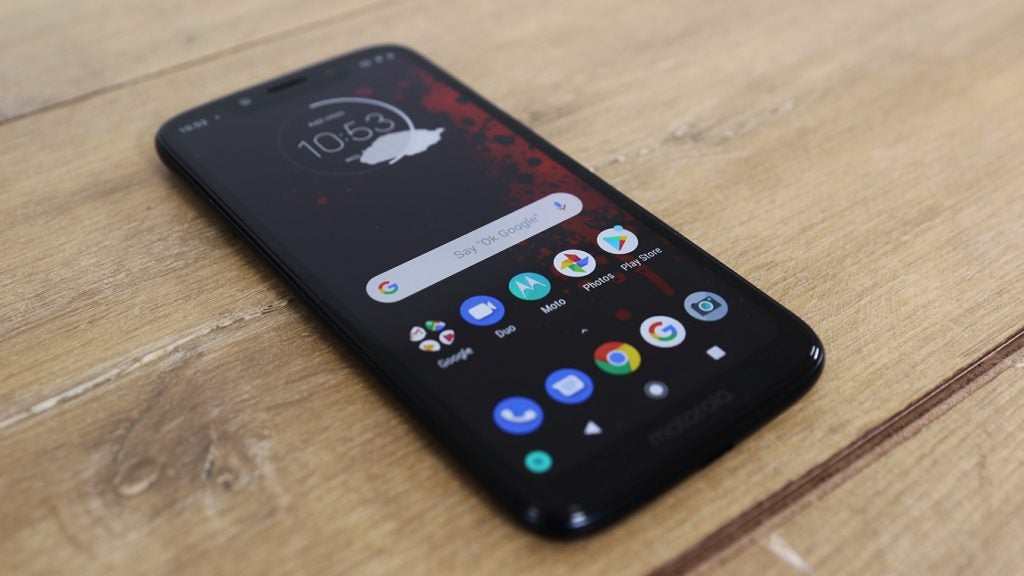 The Moto G7 Play has a fairly small 3000 mAh battery Motorola claims will last a day’s use. Sadly, unlike the other G7s, it doesn’t have TurboPower support, so it will be slower to charge.

With real world use I found battery life is actually pretty good. Using the Moto G Play as my primary smartphone I usually got at least a day and a half’s average use out of it.

Average use entailed listening to music on the commute too and from work, taking and making a few calls, regularly checking my social and messaging feeds and streaming some cartoons before bed.

The lack of fast charging means the phone does take a good while to charge. Connecting it to the mains with the included charger 15 percent off around half an hour at the mains.

More intensive tasks put a bigger drain on the battery. Streaming video the Moto G7 Play lost and average of 7-9% of its charge, which is pretty good. Higher specced phones generally loost over 10-15% of their charge running the same test. When gaming the Moto G7 Play lost around 15-20% of its charge, which again is pretty good considering how small the battery is.

Should I buy the Moto G7 Play?

If you’re on an absolute shoe string budget, or want a crash phone for your kids or a festivals then the G7 Play is a decent choice. For your money you get a compact, well built smartphone with a near untouched version of Android. This is a key differentiator from most similarly priced phones, which generally have horrible software skins. It also means the G7 Play one of the only affordable phones guaranteed to be upgraded to the new version of Android when it rolls out later this year.

However, it’s hard to fully recommend when the Moto G7 Power costs just £40 more. The G7 Power offers superior performance, an infinitely better battery life and more alluring mixed metal and glass design. We’d recommend those that can scrape together the extra cash, go for it over the G7 Play as a result.

The Moto G7 Play is a solid budget smartphone that will meet most casual users needs.