While you don’t get stock Android on the Moto G, it’s near enough to a pure Google experience as you can get. Running on Android 5.1.1 Lollipop, which is the latest version of the mobile OS, those welcome new changes are in place and still shine through the lightly skinned overlay.

The first big change you’ll notice is the Material Design, giving Android a more grown-up and sophisticated feel. Fonts are more stylised and menus are free from clutter. There’s many of the features that appeared on the Nexus 6 and Moto X, like notifications on the lock screen. This lets you press and hold on the small padlock icon to get a quick glance at messages or running apps.

Delve into the notification drop down menu and you get a good feel of the Material Design makeover and shortcuts to core Android features, like the screen casting toggle. Settings menus are broken down into the usual categories with very little that’s specifically Motorola-related. 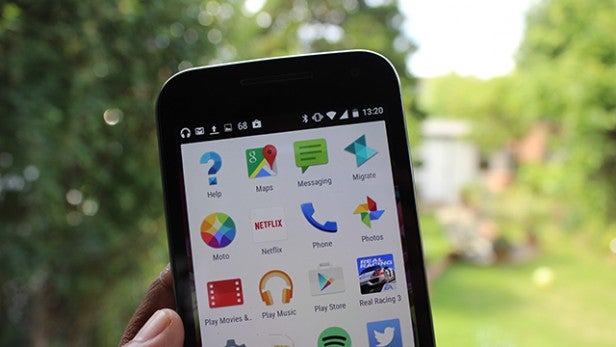 When you venture into the apps drawer, all the usual Google suspects are there. Motorola includes its useful Migrate app to help you move your content from an older phone and then there’s the Moto app. This is where you can adjust some of the few Motorola-centric features.

Assist is the biggest deal, here. This is where you can set up preferences for different locations. So, when you’re in bed, you can keep the screen off during certain hours and keep notifications restricted to priority interruptions. The same can be applied to an activity like a meeting, again to keep distractions to a minimum. 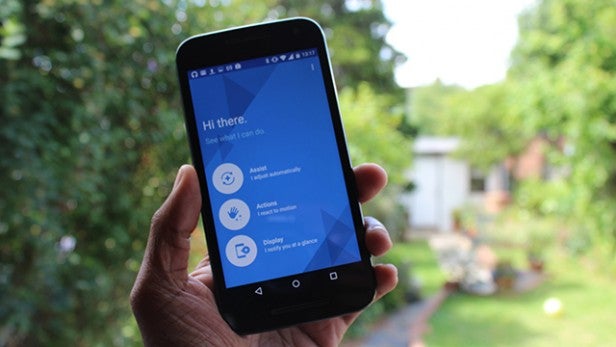 Under Actions, you can decide whether a ‘karate chop’ turns on the torch, or you can twist your wrist to quickly open the camera app. The last section is Display, where you can block apps that show on the Moto Display, Vibrate on touch and select which apps appear on the Moto Display.

These are by no means life-changing additions, but they offer a little extra control to a version of Android that remains sleek, easy to get around and just a joy to use in general.

We expected changes in the power department and while they aren’t wholesale, it brings the Moto G in line with other mid-range phones we’ve already seen and used in 2015.

Motorola has moved to a 64-bit, quad-core based Qualcomm Snapdragon 410 processor clocked at 1.4GHz, which is up from the 1.2GHz Snapdragon 400 in the Moto G 2. That’s accompanied by an Adreno 306 GPU to handle those more intensive gaming moments.

The memory situation is interesting, though. RAM, as it’s often called, plays a big part in keeping phones running smoothly when you’re running several apps in the background. The more of it, the smoother your phone should run. This year, the 8GB model offers 1GB of RAM and the 16GB model has 2GB RAM.

It an unusual for a company to split phones like this, though it does mean you get a little more than extra storage if you choose to spend more. 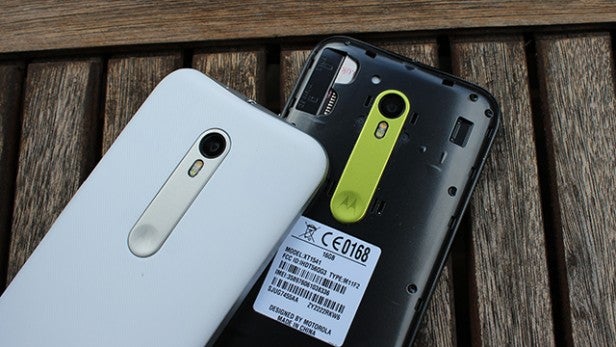 We were able to test both the 8GB and 16GB models and it doesn’t take long to notice that the extra 1GB of RAM helps out a whole lot when you’re running multiple apps at once.

There’s a nice zip to everything you do with both versions, but it’s noticeably slicker when you throw more at the 2GB version. Over time we’ve noticed some sluggish performance creep into the Moto G 2, so if that’s a concern for you then investing in the 16GB version makes a lot of sense.

We’ve run Geekbench 3 benchmark tests on both variants and this how they score in the multi-core test after five successive tests:

What does that tell us? Well, that the Motorola has made some incremental changes in performance. In reality, it’s still a sufficient chipset to give the kind of day-to-day performance you need and handles more graphically demanding gaming without any signs of a struggle.

Just don’t take these results to mean the extra RAM doesn’t make a difference – it does. It just means this particular test doesn’t show it.