Moto E5 Plus – Software and Performance

The Motorola Moto E5 Plus runs Android 8.0.0, and has a light custom interface that looks almost exactly like pre-Pixel Android. In the past couple of years, the tweaked interface used in Google Pixel phones has become a sort-of default for the system.

It’s a great interface. There’s no bloat, the look is clean and all the gestures are intuitive.

A flick up anywhere on the Moto E5 Plus homescreen takes you to the apps page, which is a simple vertical scroll. It suits the screen size, too, with five columns of app icons instead of four. 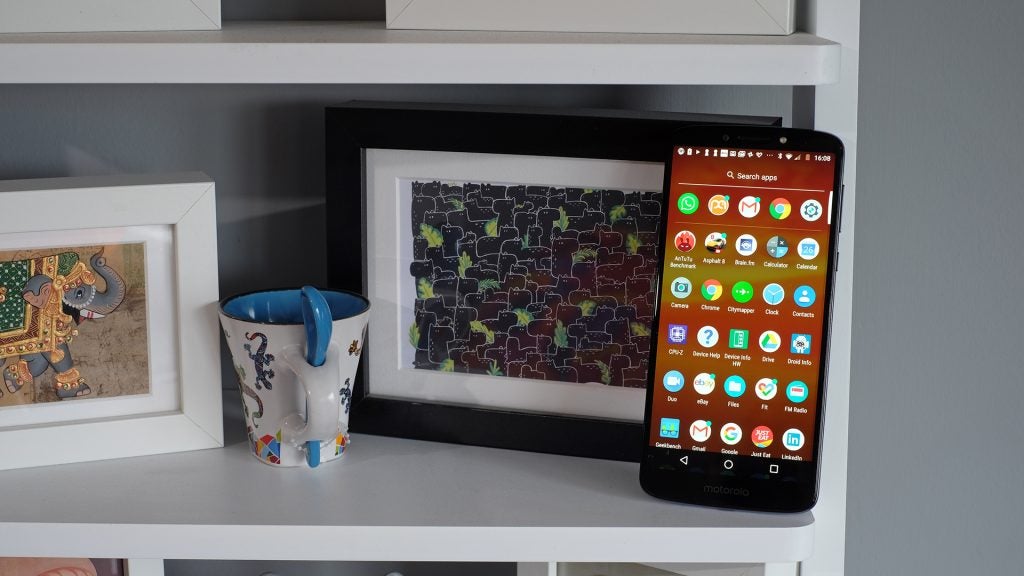 There are a few Moto extras, but these don’t interfere with the core feel of Android. Moto Display is a screen that appears when the E5 Plus is in standby. It shows the time, the charge level and any relevant notification icons.

When on a surface, it will switch on when the acceleromter inside the phone senses it has been moved or touched. It’s a handy little extra.

Moto Actions offers a few gesture shortcuts, such as stopping the phone ringer when you put the phone down on its front. There’s little to dislike in the Moto software. 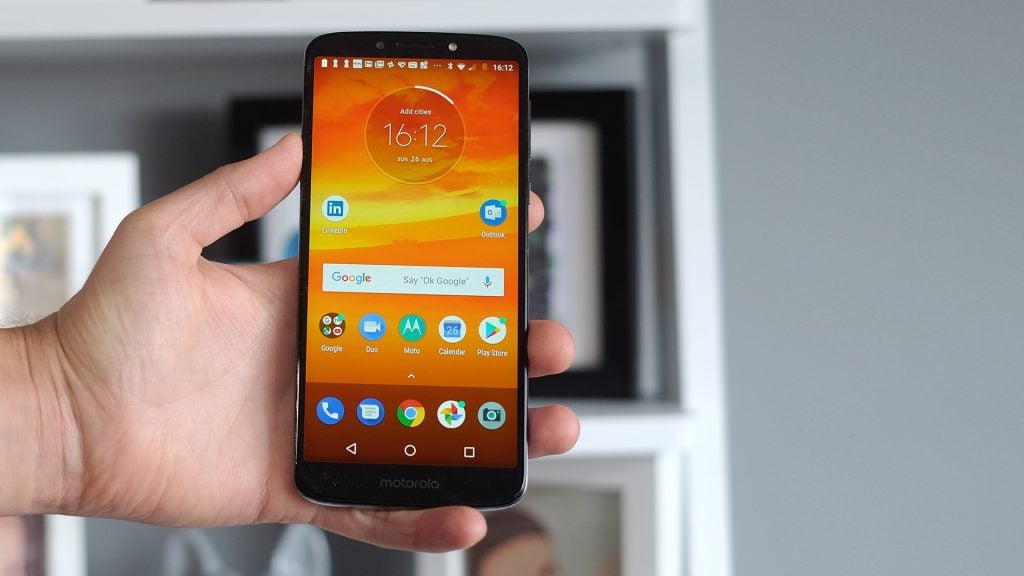 However, the Moto E5 Plus’ performance is just okay. It’s better than the Alcatel 5 or the Honor 7A, by quite some margin. You can swipe through the interface without any obvious delays and, on the whole, you won’t encounter any mind-grating pauses as you wait for the keyboard to appear or for the phone to catch up with your inputs.

App loads are distinctly slower than those on the Moto G6 Play, or Moto G6, however. If an app isn’t cached in the RAM then you’ll have to wait about 1.5 seconds for it to load – or more, if it’s a big data-hungry app. You’ll experience intermitting lag that just isn’t an issue with the Moto G6 Play.

This would be enough to make me want to upgrade to one of the G-series phones. However, unlike some really quite wobbly devices at the price, the Moto E5 Plus feels consistent and solid. Just be aware that it isn’t a rocket. 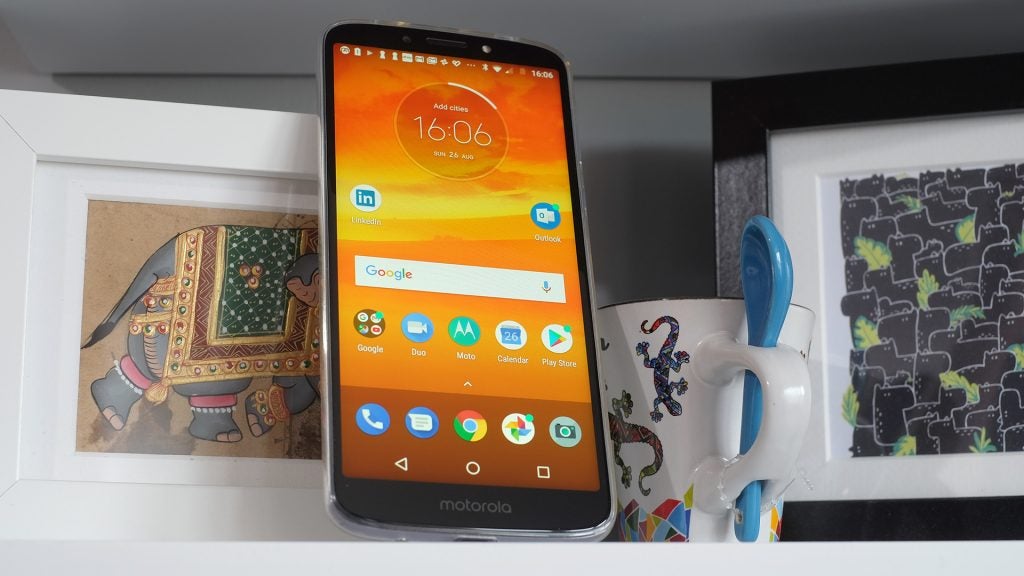 This is down to a low-end CPU and just 2GB of RAM. The Qualcomm Snapdragon 425 is a quad-core processor with four Cortex-A53 cores.

The Moto E5 Plus scores 1732 points in Geekbench 4, roughly half the score of the Moto G6. Note that in the US, however, the Moto E5 Plus comes with a more powerful Snapdragon 435 CPU. It has eight cores instead of four, and in terms of performance, is likely to be on a par with the G-series phones.

The UK version is a step below. It’s the same with gaming. At ‘High’ graphics settings, the frame rate dips to single figures when certain graphical effects kick in, so you’ll need to lower the visuals in some games.

We also get only 16GB storage in the UK. G-series phones have 32GB. After installing PUBG, Asphalt 8, a bunch of small apps, and downloading a few podcasts, I have roughly 3GB left. 32GB would provide far more room in which to play.

However, the Moto E5 Plus is precisely for those folk who don’t need the extra scope of the Moto G phones. 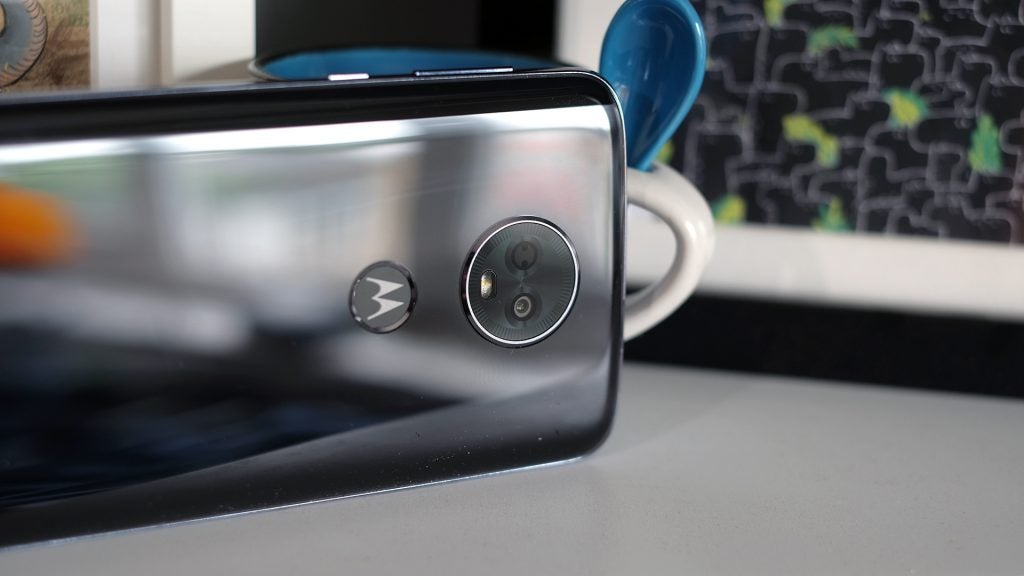 The Moto E5 Plus has a 12-megapixel rear camera with a laser focus assist module. Presumably, this is the part on the rear that looks like an eyepatch in the phone’s face-like camera array.

Its 4096 x 3072 resolution suggests the sensor may well be an OmniVision OV12A10, which is used in a bunch of Xiaomi phones. These are low-cost models too. 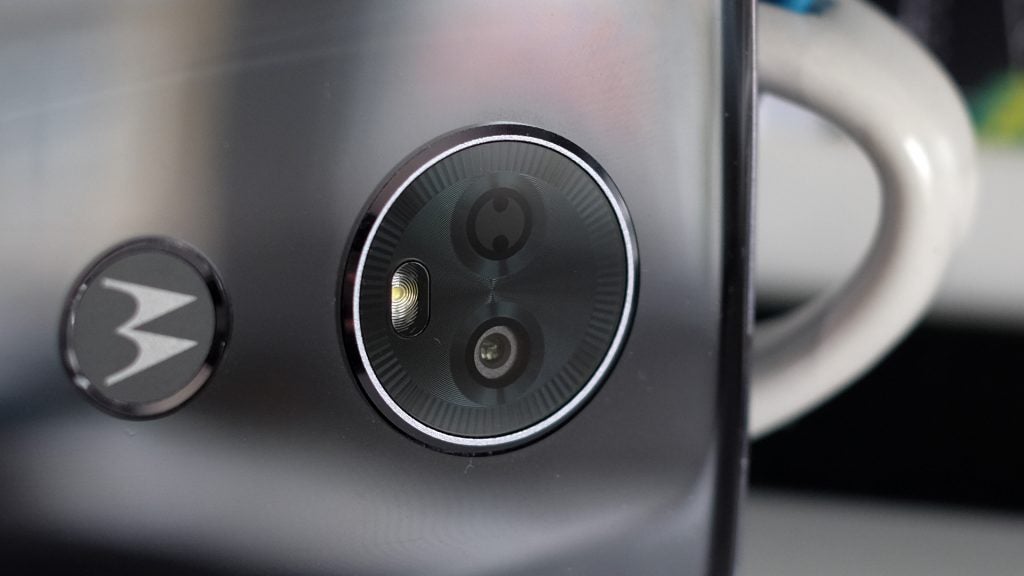 I’ve always considered a 12-megapixel camera a sign of a top-quality sensor, but that isn’t true of this OmniVision chip. Nevertheless, for the price, the Moto E5 Plus’ camera is perfectly fine.

It takes mostly solid photos in daylight. They’re not as sharp as those taken with cameras sporting a Sony 12-megapixel sensor, looking a little vague at pixel level. Plus, there’s some purple fringing and, too often, the Moto E5 Plus takes slightly blurred photos even in daylight. 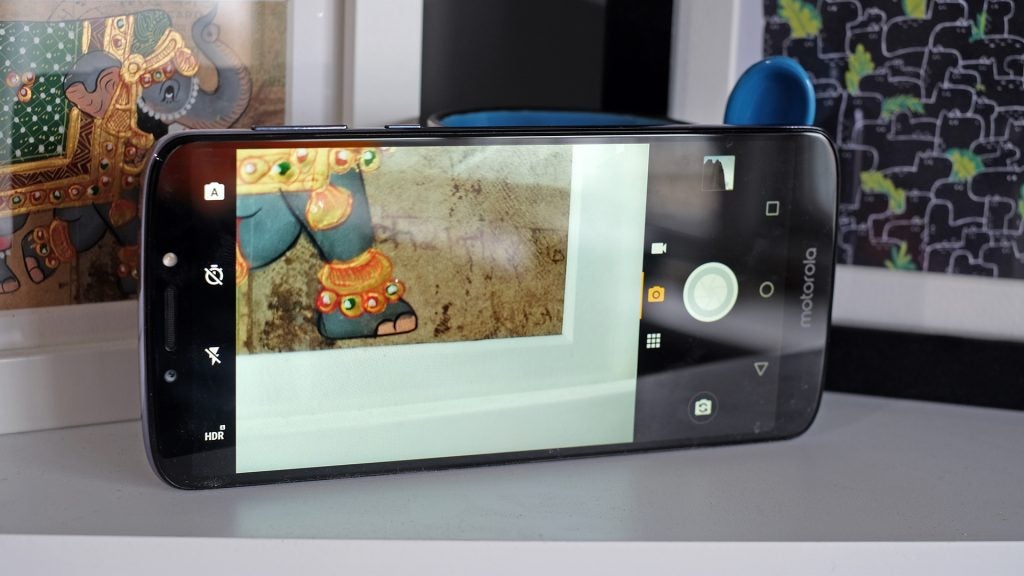 However, for the money the E5 Plus camera is perfectly respectable, and there’s an Auto HDR mode that improves dynamic range in scenes with high light contrast. The Moto G6 and G6 Plus are, predictably, better. And the 5-megapixel front camera is unremarkable. 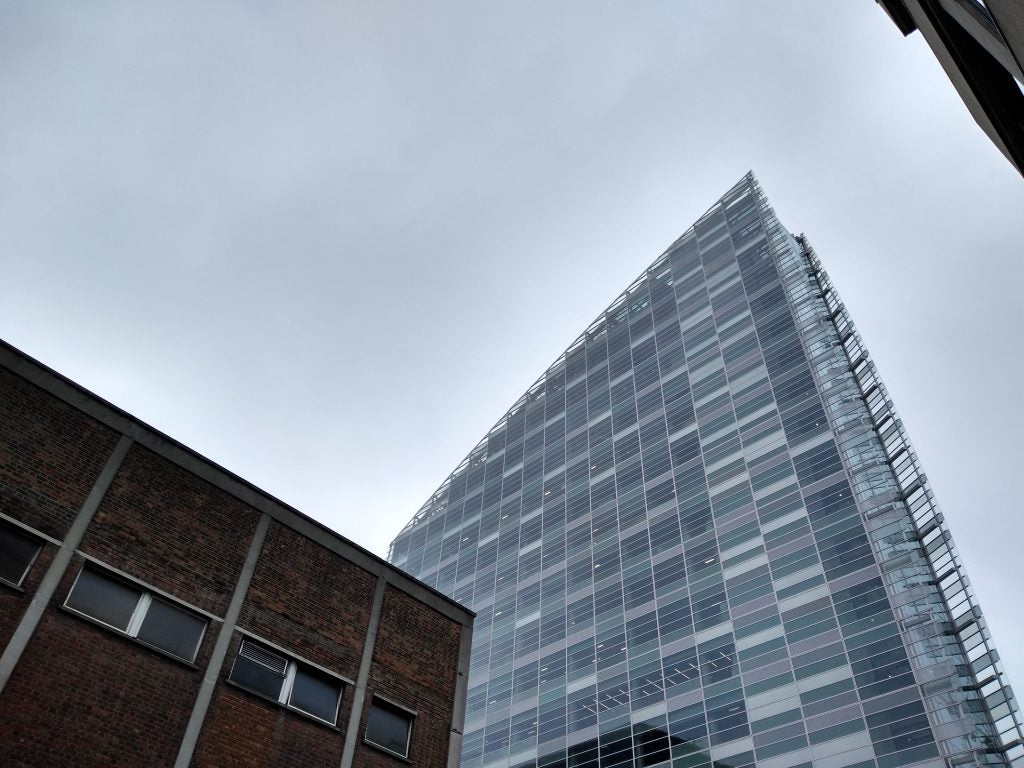 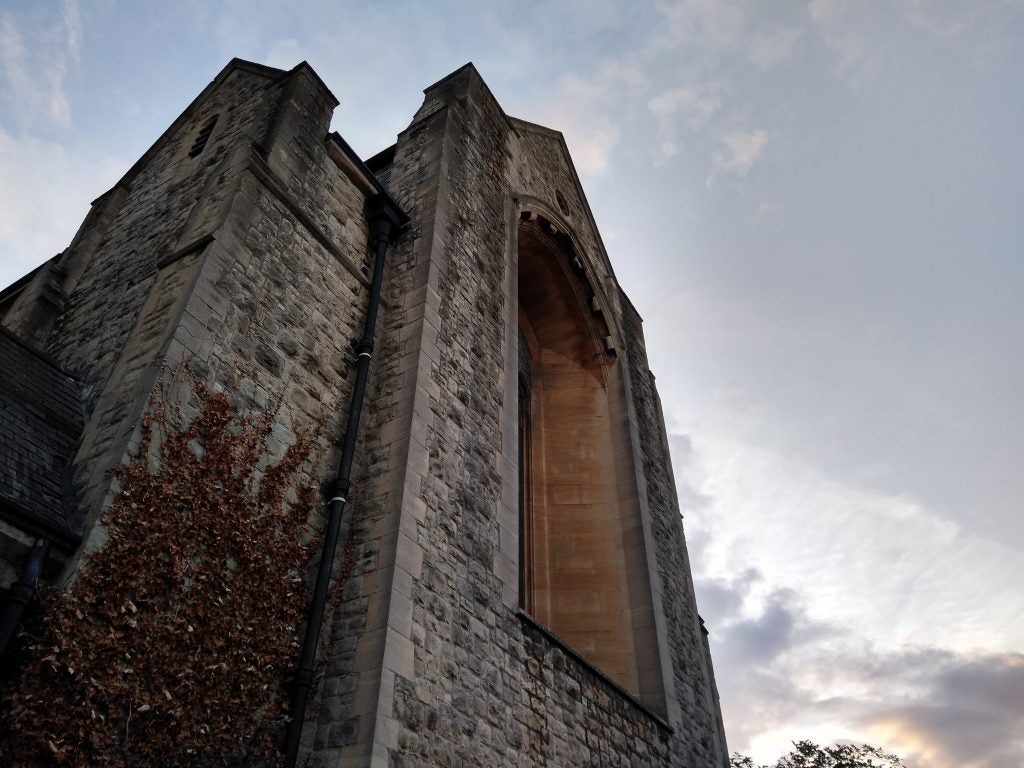 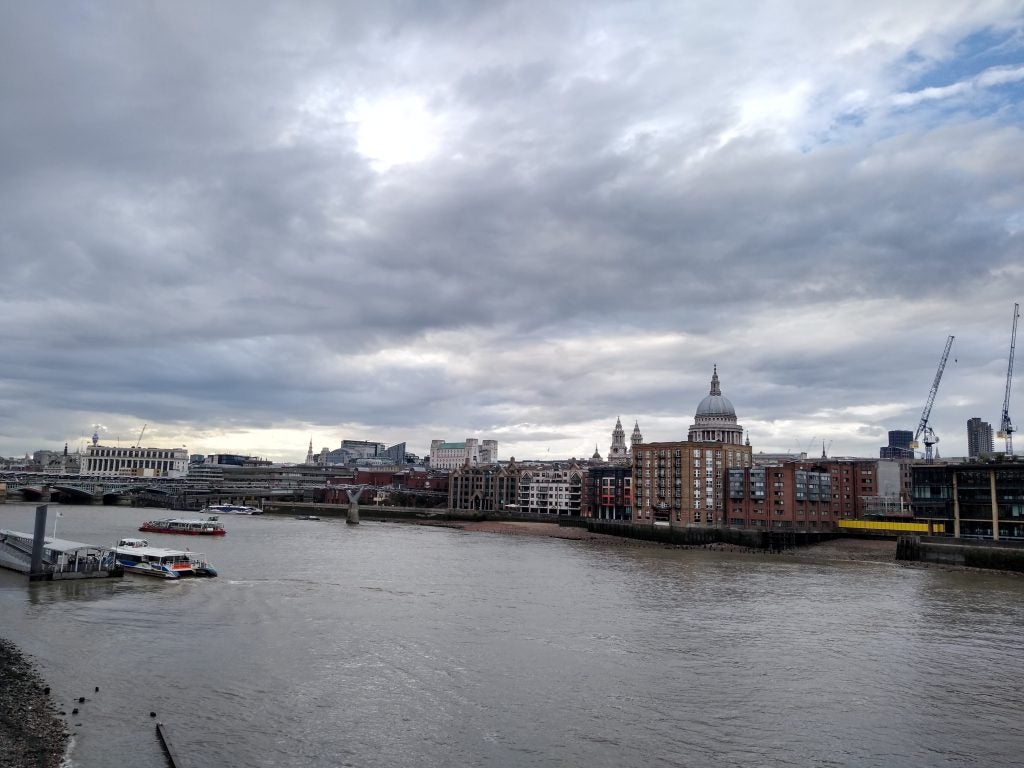 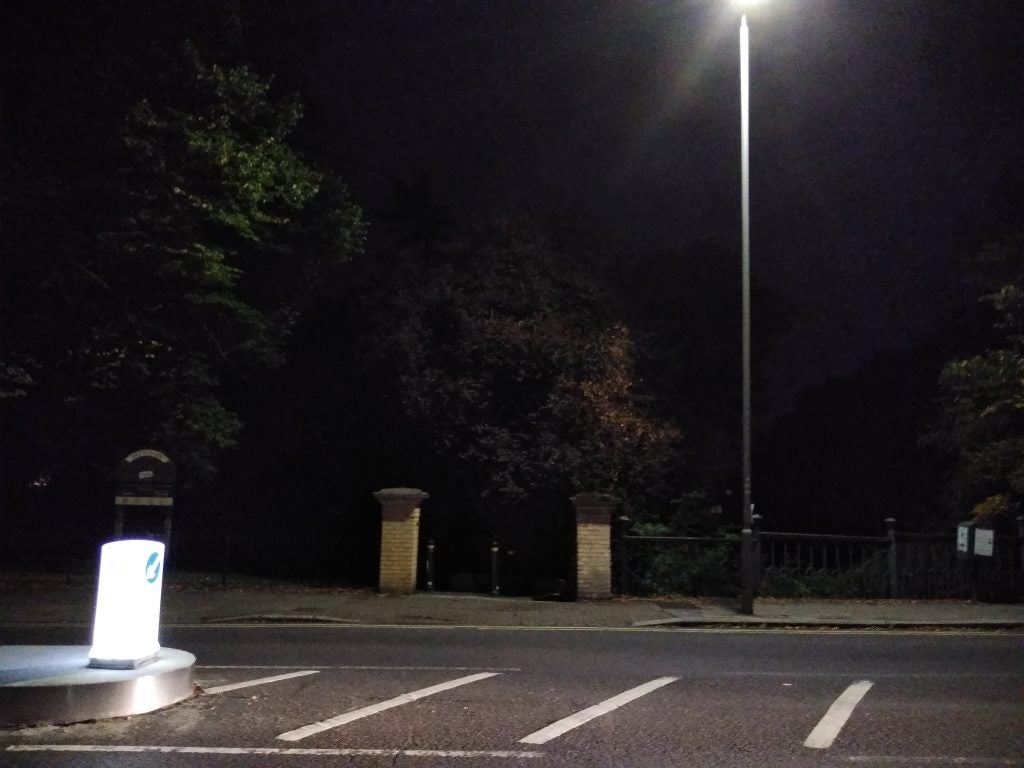 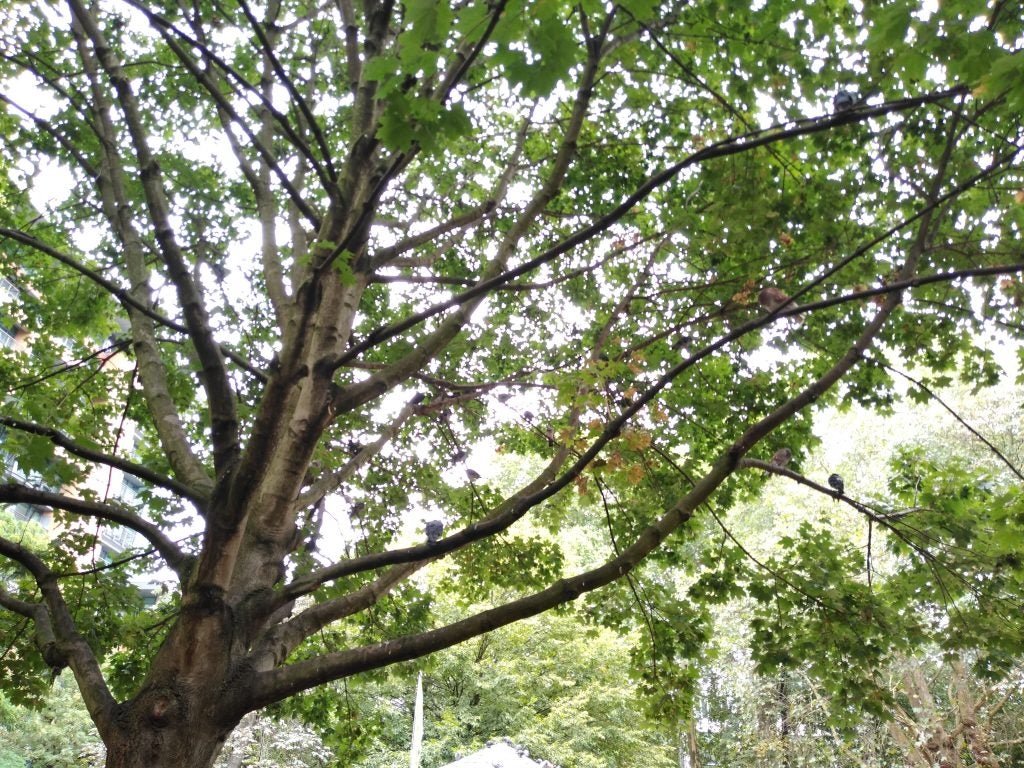 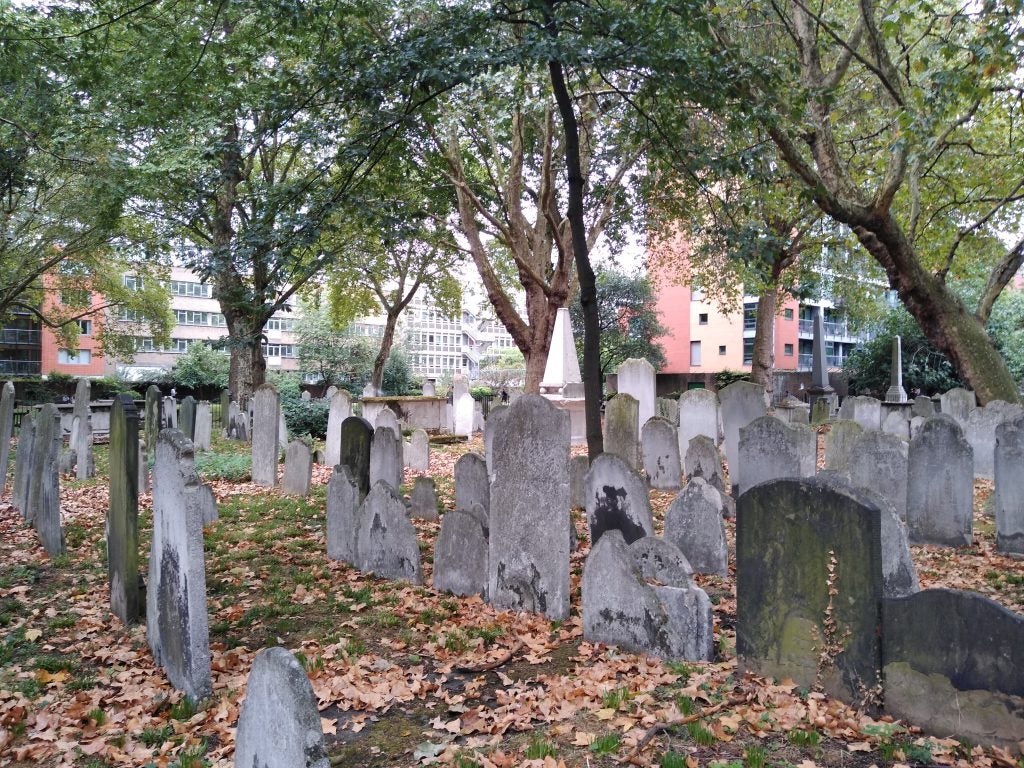 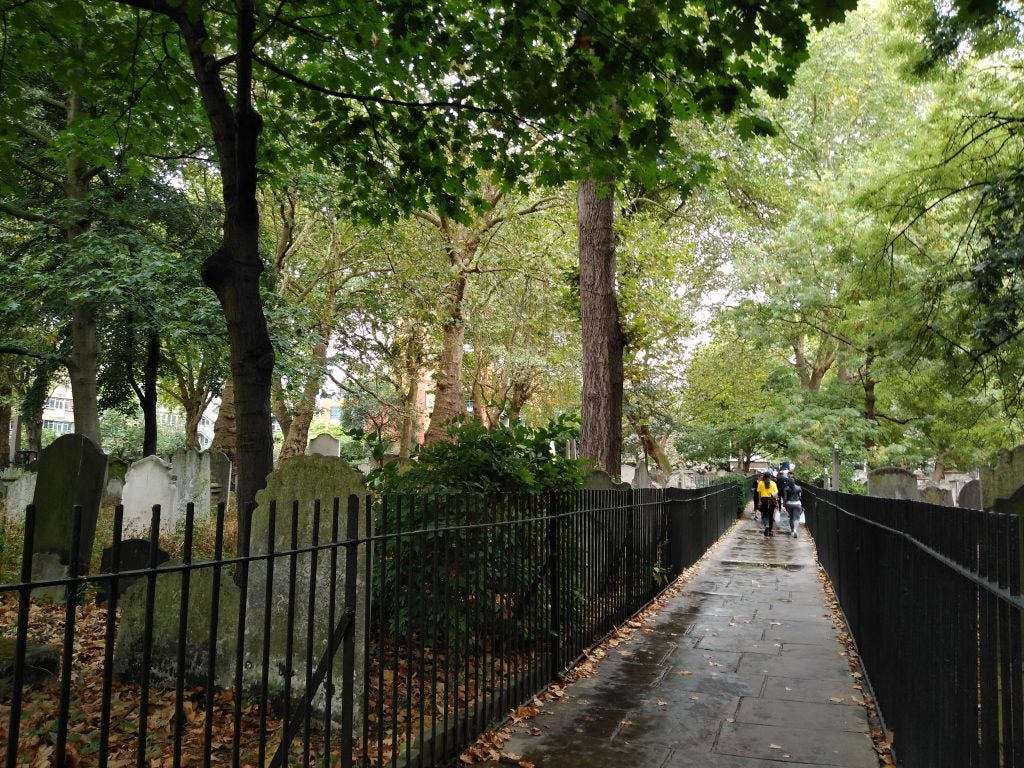 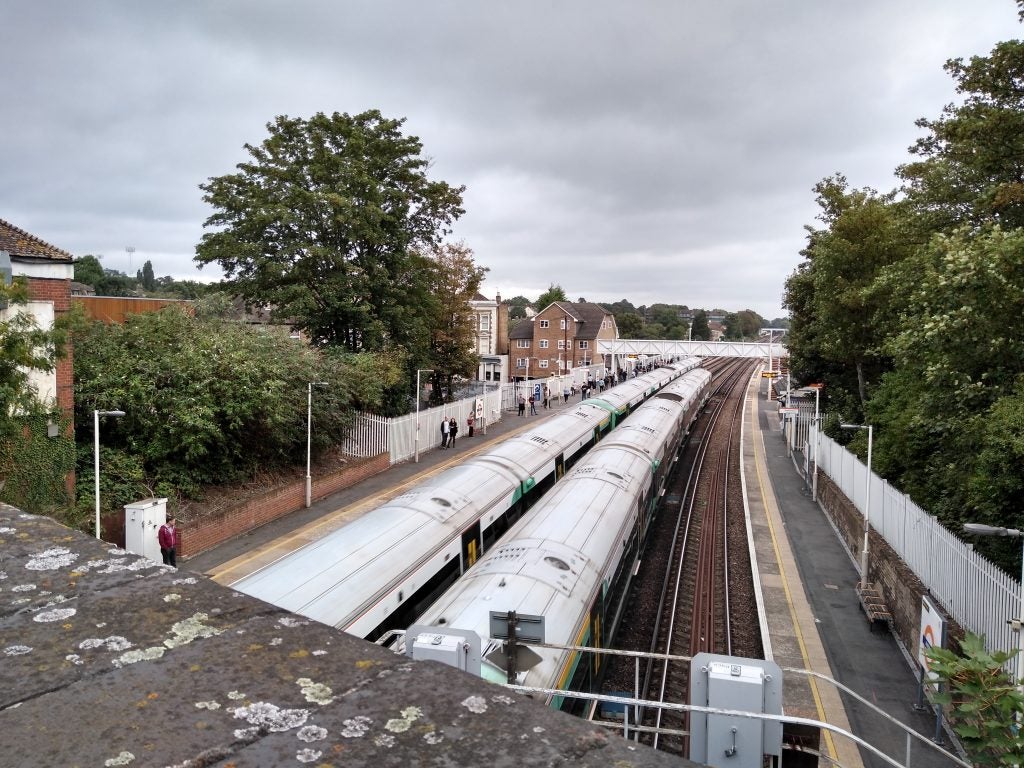 Battery life is the best part of the Moto E5 Plus. It has a 5000mAh cell, which is a ridiculously large unit for a phone.

As such, this is the longest-lasting handset I’ve used in quite a while. It outlasts the Samsung Galaxy Note 9 and the Huawei P20 Pro in my experience.

For example, on one full day of use – starting at around 7am – it had 48% charge remaining by 11:30pm. That was after a full day out and about in London, with notable hours of podcast streaming, some browsing and taking a few photos. 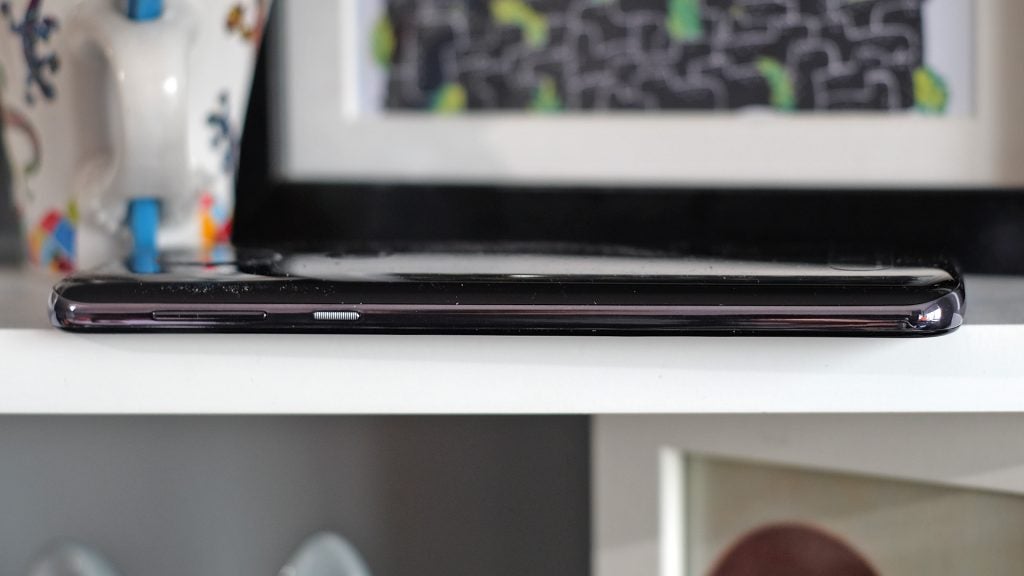 By morning it was showing 45%, which lasted until 4:30pm the next day. The Moto E5 Plus may not have made it to a full two days, but it will in the hands of a lower-demand user. It lasted very nearly to bedtime on day two on another occasion. Motorola only makes a claim of “1.5 days”. I’d argue it exceeds this, at least a little.

This kind of longevity is fantastic, and may overshadow the second-tier general performance for some.

The Moto E5 Plus doesn’t come with a fast charger, however. Buyers in the US get one of Motorola’s great Turbo chargers, but in the UK we get a standard 10W one. 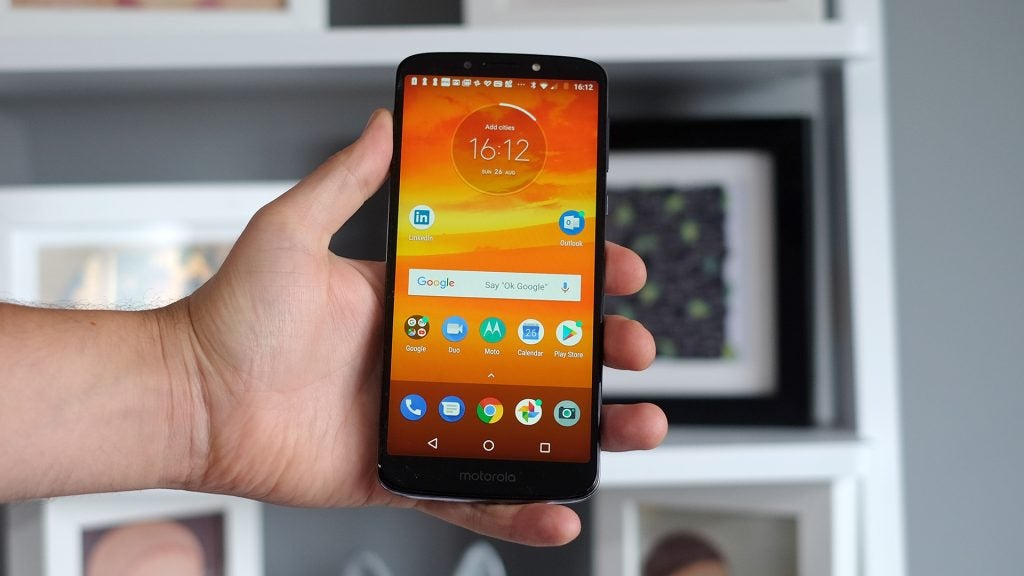 Why buy the Moto E5 Plus?

The Moto E5 Plus doesn’t suffer from the nasty performance problems you’ll see in some of the Alcatel and Honor phones at this price. It’s a better buy.

However, UK buyers are right to be tempted by an upgrade to the Moto G6 Play. It’s slightly more expensive, but performance is better, not only in games but in day-to-day flicking between apps.

The Moto E5 Plus’ battery life is undeniably brilliant, though.

A great budget phone, although an upgrade to the better-performing Moto G6 Play is tempting.