Ultimately, this is where it all comes crashing down for the Moto 360. Like the G Watch and the Gear Live, you’re going to have to charge the Motorola smartwatch as regularly as your smartphone. If you own a flagship phone like the One M8, Galaxy S5 or even the Note 4, you’ll actually end up charging the Moto 360 more often than your handset.

Motorola has recently introduced a firmware update where some users have noticed longer battery life, but having not received the update we can only base our findings on the older firmware. And we found it wanting.

The 360 packs a 320mAh battery, which is bigger than the one in the Gear Live (300mAh) but smaller than the one inside the G Watch (400mAh). That should get you a day and a half of use, and it more than lives up to that from our first week of testing. There’s ways to preserve the battery life, such as muting notifications, but that sort of defeats the purpose of having a smartwatch in the first place. 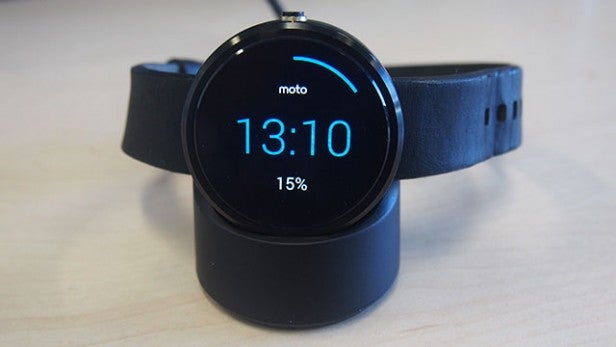 Unlike standard digital watches, the Moto 360 doesn’t have an always-on display by default, but you do have the option to use the Ambient screen mode to keep the display turned on. It comes at the expense of battery life and, as we found in our second week of testing, you can expect to scrape a day’s use out of it.

One thing the Moto 360 has that it rivals doesn’t is wireless charging support. The small wireless charging dock works with a standard micro USB cable and you can sit the watch either way round to power it back up.

It’s quick at restoring the 360’s battery as well, doing it in just over an hour, and can double as a bedside clock if you don’t already have one or use your phone to do the very same thing. 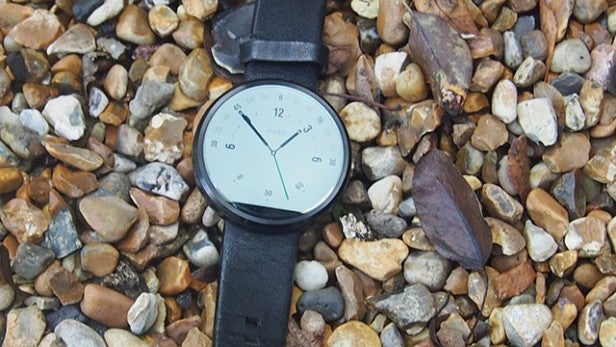 Based on the time we’ve spent with the Moto 360, we’d recommend waiting for the second- or even third-generation model. Both the hardware and the software is simply not up to scratch and the very fact that it’s no longer on our wrist speaks volumes. We might have felt differently about the look had we been using the stainless steel model, but that still wouldn’t make up for that ugly black bar across the bottom of the screen and how chunky it is compared to most watches.

The heart-rate monitor should have been a great feature, but it simply doesn’t work well enough and Android Wear still needs to provide a more convincing argument that it has a future, especially with the Apple Watch on its way next year.

Ultimately, though, it’s the battery life that’s the killer here. It’s nice to have wireless charging, but until Android Wear watches get Pebble-like stamina it’s going to be difficult for us to recommend them.

The 360 is also the most expensive of the Android Wear watches, and we don’t think you’re getting much more for your money compared to the G Watch and the Gear Live. The Samsung is still our pick of the first-gen watches, but that’s not really saying much at all.

Both software and hardware are just not there yet. Maybe it’ll get better in a year’s time, but at the moment, we haven’t fallen in love with either.

The Moto 360 is not the smartwatch we hoped it would be, and still leaves Android Wear with plenty of convincing to do.