Back when Google’s Wear OS was known as Android Wear, Motorola was among the handful of tech companies that embraced the smartwatch platform, launching the Moto 360 in 2014.

After the rectangular looking LG G Watch and Samsung Gear Live, it marked the first smartwatch to put Wear inside of a circular watch case. It was arguably the most popular of those first gen options and while it wasn’t perfect, there was a whole lot more to like about than LG and Samsung’s early efforts.

A second generation 360 landed in 2015 and after that Motorola went quiet on smartwatches. So the third Moto 360 lands a fair few years after the last one, except all is not as it seems. This is not made by Motorola, but by a company called eBuyNow. Motorola opting to license out the smartwatch brand in an effort to revive it and bring it in line with the smartwatches of today.

The original Moto 360 was in many ways a major breakthrough in terms of making a smartwatch that didn’t feel like it was built by a tech company. With the second generation 360, Moto realised that both men and women might want to wear smartwatches and offered two size options and a nicer range of looks.

The new Moto feels like it’s stayed true to the look of past generations, and in many ways I wish it was more daring on that front. You’re now getting just the one size option, with the 42mm watch available in a stainless steel, rose gold or phantom black options. That’s combined with a 20mm strap that is available in leather and a more sport-friendly silicone and both are included with the watch.

There’s a crown to scroll through Wear and a single button marked with the Motorola M logo, that can be assigned to your favourite apps and features.

It weighs in at 52g and measures in at 13mm thick when you factor in the heart rate monitor around the back. So you’re not getting the slimmest smartwatch you can currently wrap around your wrist. In comparison, the Apple Watch Series 5 measures in at 10.7mm and Fossil’s latest Gen 5 is closer in thickness with its 12mm thick body.

It’s not a chunky watch by any means, but it certainly doesn’t feel very elegant or sleek either. There’s no denying that this is a sturdy, well-built smartwatch that veers on the side of a classy, suit-friendly watch, but it’s a design that just feels a little too safe. 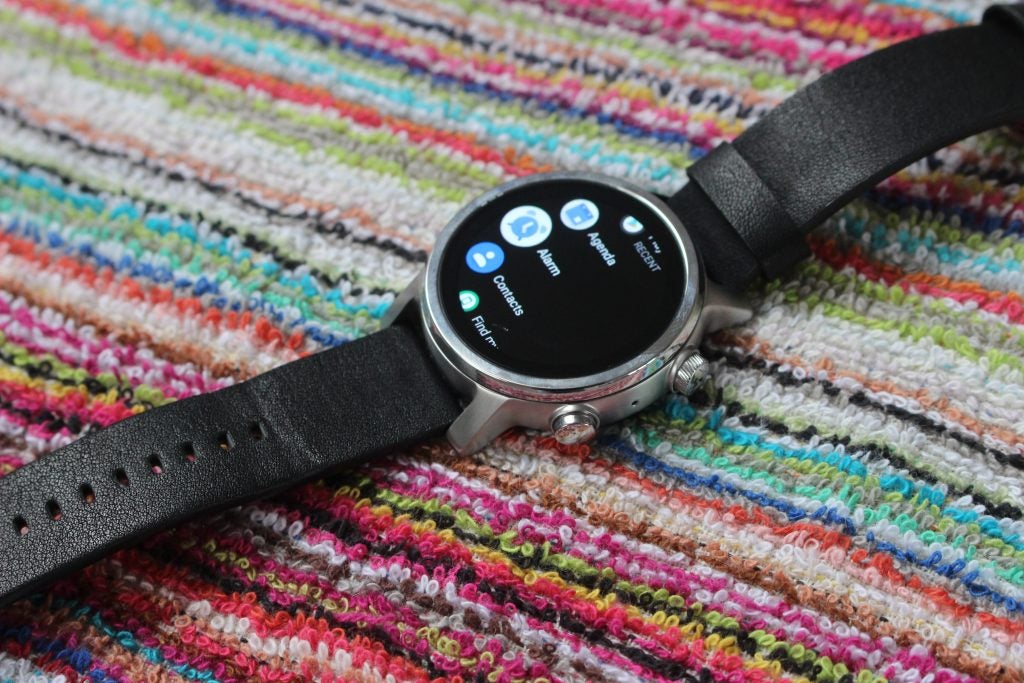 The first Moto 360 will forever be remembered as the smartwatch that looked a little like a flat tyre, thanks to the black bar at the bottom of the touchscreen display. It certainly wasn’t the only one guilty of not going fully round, but it was definitely the first to do it.

Thankfully, there is now a fully round 1.2-inch AMOLED touchscreen delivering an impressive 390 x 390 resolution, which is a notable upgrade on the 360 x 330 resolution LCD screen that was packed into its predecessor.

In a way, the spirit of that flat tyre hasn’t entirely disappeared. There’s now a black bezel that surrounds the display that essentially spreads it out further, which is not so noticeable when the screen is asleep. As soon as you wake it up though, it’s not the prettiest sight – it’s a shame that the bezel eats up so much screen estate.

The quality of smartwatch displays on the whole have stepped up a notch since those early Moto 360 days, and the display on the new 360 is bright, vibrant, and offers good colours and viewing angles.

If you care about having an always-on display, just like you can on the latest Apple Watch, the new 360 delivers on that too.

Like its predecessor, the new 360 is leaning on Google’s Wear OS to tick the software box. It’s the latest version, which means the most recent changes made, like Tiles, and features, like the revamped Google Fit, are in place. It’s a pretty pure Wear experience, with very little in the way of extras outside of some watch faces.

It does those staple smartwatch things like dishing out notifications for your paired Android smartphone or iPhone, has a built-in music player to pile on your tunes, access to Google’s Assistant smart assistant, and you can delve into the Play Store to get more Wear OS apps. The onboard NFC means you have Google Pay at your disposal if you like the idea of paying for things from your watch.

It’s a very familiar smartwatch experience if you’ve delved into the world of Wear watches before. A lot has changed since the last Moto, but a lot of the issues that plagued Wear back then still persist today. Getting around still feels a little clunky and features like Google Assistant don’t really match the experience of using it on a phone or a smart speaker as far as reliability or usefulness are concerned.

While it might not look like it’s built for the gym, this watch has pretty much everything you need to workout with it. There’s built-in GPS including satellite support for Beidou and Gallileo systems to increase mapping coverage. There’s an optical heart rate monitor and 3ATM waterproofing means you can swim with it on, and has the ability to track your swimming with a suitable third party swim app.

The first thing you’ll need to do is swap in a different strap, because it’s clearly designed to get sweaty with and as mentioned, a sportier band is included. Once you’ve done that, its sports tracking skills pretty much fall in line with what we’ve found from other smartwatches that heavily rely on Google’s operating system. The GPS signal pick up for outdoor tracking can be sluggish at times and the heart rate monitor accuracy is iffy when you push it to its limits for some high intensity training. 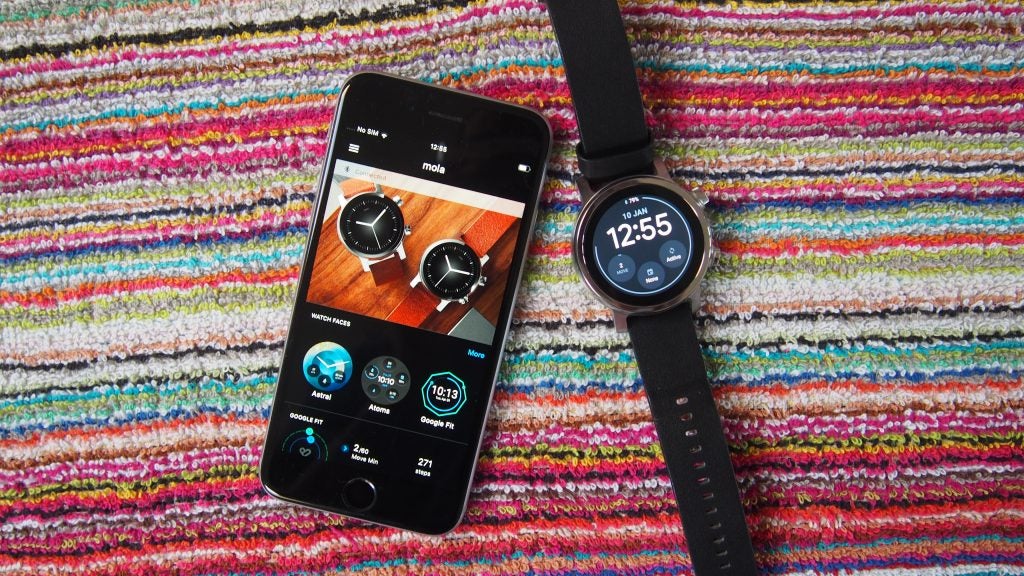 If you’re banking on Google Fit to be the place to track and collate your workout data, be warned – it’s not the greatest to use. It just doesn’t feel that well optimised for the small surroundings of a smartwatch. If you have to track, we’d suggest opting for a third party fitness app instead.

The new 360 has been brought it in line with what the current crop of Wear OS smartwatches can offer. That means you’re getting 8GB of storage, which is double what the last iteration packed. That’s accompanied by a beefed-up 1GB of RAM to help keep things running smoothly. Rounding things off is Qualcomm’s Snapdragon 3100 processor. You’re essentially getting the best spec sheet Wear OS can offer right now.

In terms of day-to-day use this is a really nice smartwatch. Unlike some Wear OS watches that match the Moto’s internals, it’s definitely been a more pleasant experience. Swiping through screens wasn’t laggy and there weren’t any frustrating app loading times to contend with.

When it comes to the battery, the Moto 360 isn’t breaking new ground. There’s a 355mAh capacity battery that is designed to get you an entire day of play time with it. There is also a battery saver mode on board that kicks into gear when battery life hits critical status. At that point you’re stuck with a smartwatch that will only tell you the time.

In my experience the battery tended to make it through a day and would maybe stretch to a day and a half, so within the norm of most Wear watches. When you factor in using the GPS or having the display in always-on mode, that is inevitably going to impact on its staying power. You do of course have that battery saver mode, but you’re very restricted as far as what you can do in that mode.

On the plus side, it’s a snappy charger when you do go fully flat. The promise of getting back to 100% in an hour definitely rings true, and even a 20 or 30 minute charge does a good job of topping it up if you’ve forgotten to charge it overnight. 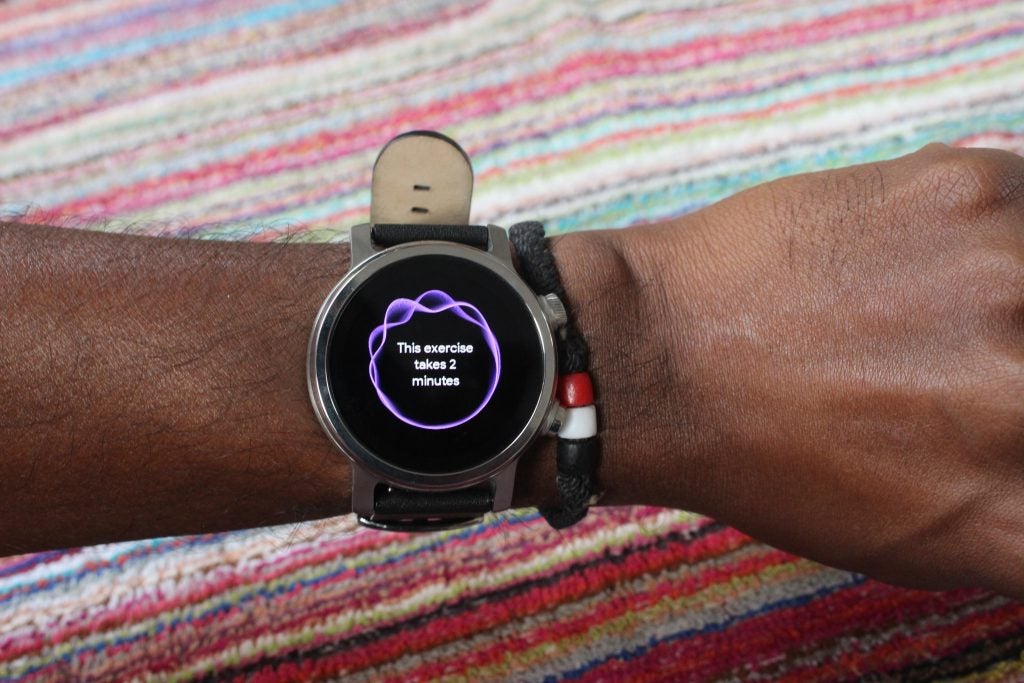 If you’re someone who loved the first Moto 360, then you might be sold on the idea of an updated version with upgraded internals that is overall much smarter than the last 360.

That being said, there’s nothing here that makes it stand out from the rest of the smartwatch crowd or betters the experience you’ll get from an Apple Watch or a Samsung smartwatch. This is not a best smartwatch, and it falls flat in a number of areas.

It’s expensive, and for the same price – or even less – you can own a smartwatch that looks nicer and offers pretty much the same features.