What is the Motiv Ring?

Mention a fitness tracker to most folk, and they assume it will be a device you wear around your wrist. However, the Motiv takes that preconception and throws it out of the window, packing an activity tracker, sleep tracker and heart rate monitor into a ring.

With the likes of Fitbit and Misfit trying to dress up their fitness trackers as jewellery, the Motiv takes it to the next level of discretion.

The Motiv Ring’s feature set might be quite basic compared to some rivals, but if you want a more subtle wearable, then it does an impressive job of seamlessly integrating into your everyday life. It offers a three-day battery life and water-resistance – just note that the Motiv currently only works with an iOS app.

First, buying a fitness tracker in ring form isn’t as straightforward as buying one for your wrist. While the latter will usually come with a choice of either small or large wrist bands, for the Motiv you’ll first need to figure out your ring size.

For this reason, you’ll be sent a sizing kit in the mail before you actually receive your device. It makes the buying process a little longer, but it’s an important step.

It’s similar to the ‘try at home’ process of buying new glasses online. You’ll receive a number of ‘dumb’ rings of different sizes in the box, and it’s up to you to try them on and decide which one fits your finger of choice best. 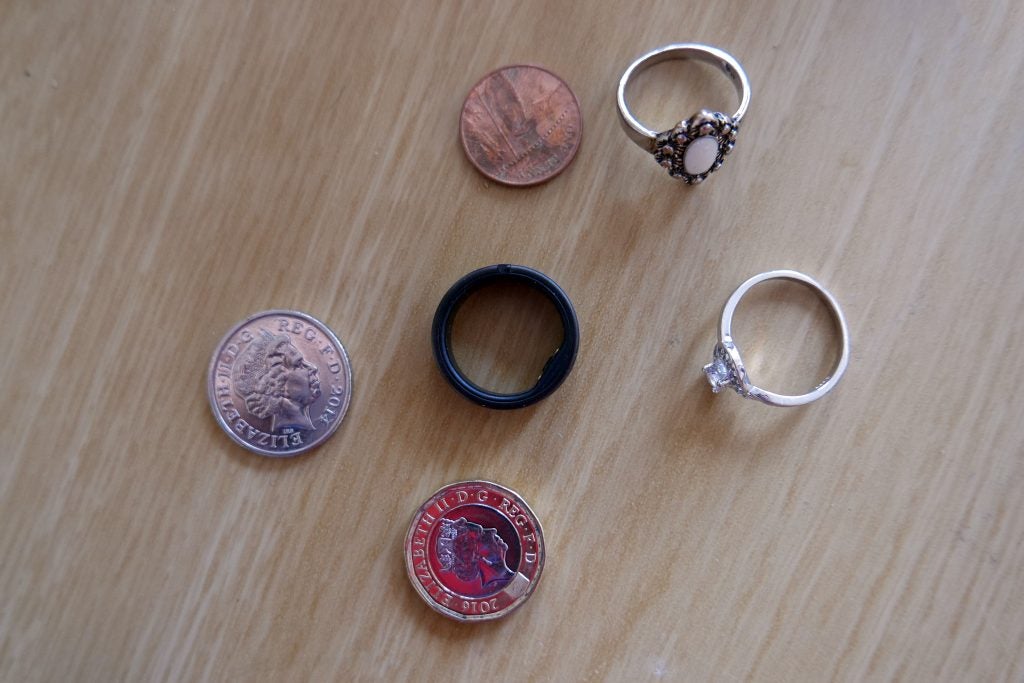 Motiv recommends that you steer clear of wearing its ring on your pinky or thumb, however. It also advises that you wear the trial ring for a day, since your fingers are prone to expand and contract under different conditions. You’ll need to use the sizing kit even if you know your ring size already, since Motiv doesn’t use standard measurements. Still, it ensures you get a proper fit.

Motiv is incentivising sharing your sizing kit, too, offering a $20 discount to your friends and family who go on to buy a ring, meanwhile saving the company from having to send out another kit.

Once this is done, plug the unique code you get with your sizing kit into the website along with your chosen size. You have a choice of either Slate Grey or Rose Gold finishes.

The ring itself is relatively chunky, at 8 x 2.5mm, but if chunky accessories are your thing then you’ll probably like the Motiv’s design. I’m not normally a ring wearer but I really like it.

The Motiv is pretty plain and unobtrusive in either finish. I opted for the Slate Grey colour, which features only a single stripe of a darker grey to break up its design. There’s a little blue LED hidden away in the stripe that lights up when the Motiv is syncing. 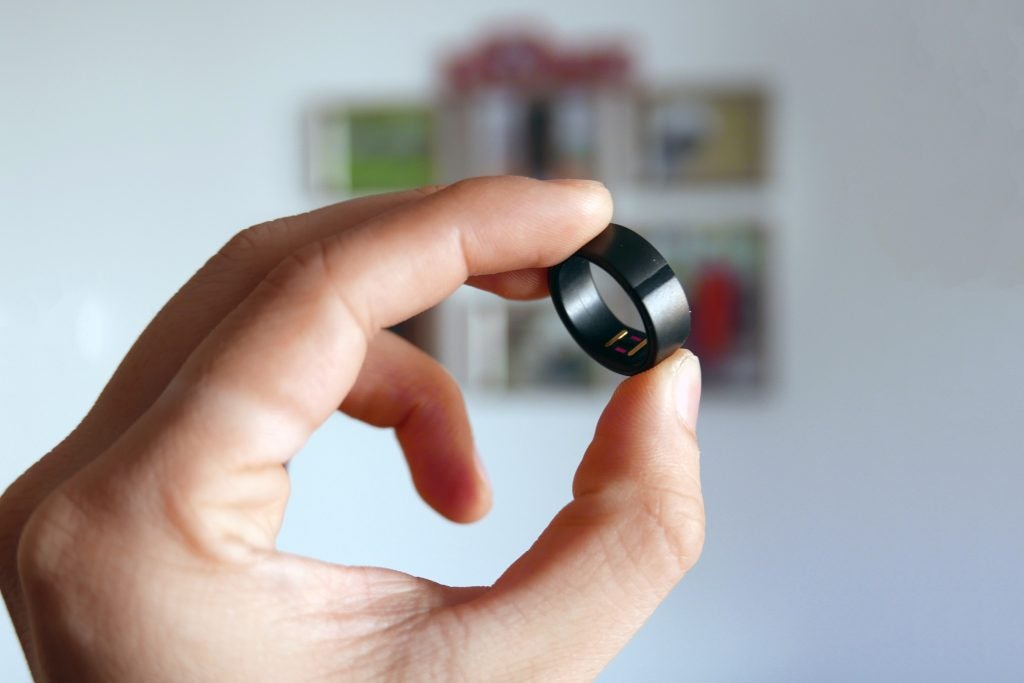 If you look at the ring side-on, you’ll see that there’s a flat section where the inner isn’t perfectly round. This is where the teeny-tiny optical HRM resides; it’s shaped that way to make better contact with your skin. You’re supposed to wear it with the heart rate monitor on the underside of your finger (the same side as the palm of your hand). I’ve mainly opted to wear the Motiv on my index finger but occasionally move it to my middle finger, which is the same size.

During the week of testing, I found I had to move the ring from my right hand to my left. For whatever reason, my right hand is more prone to swelling, so at times it became a little too tight for my liking. I’ve not had the same problem wearing it on the opposite hand. Those used to wearing rings on their fingers won’t find the Motiv too strange an addition, but it took me a while to get used to it. 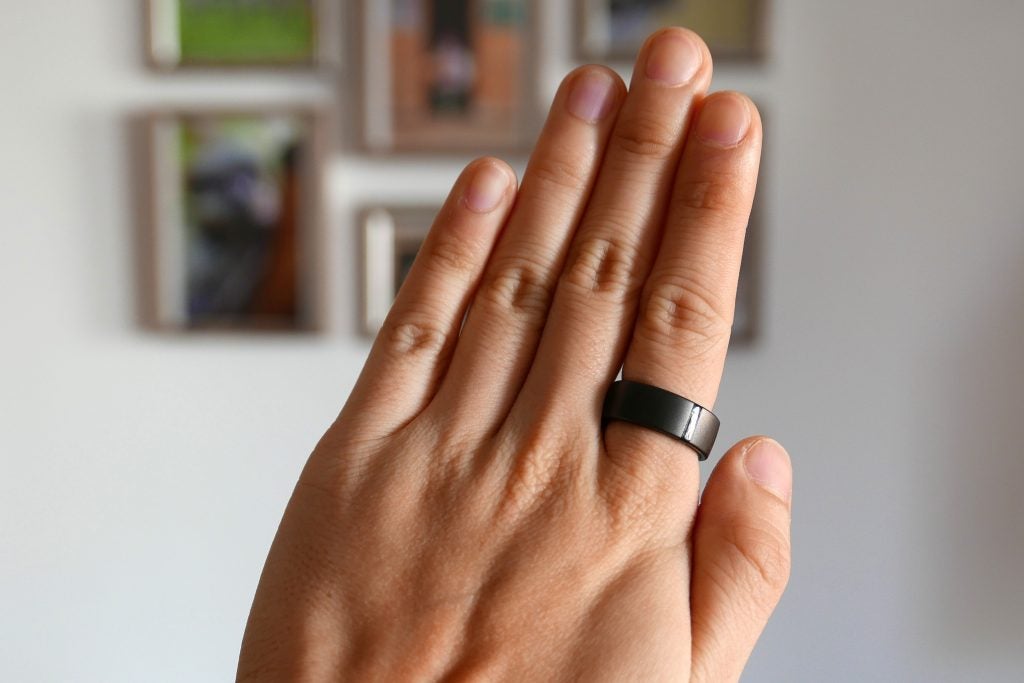 In that week of use, the underside of the ring – which is most likely to make contact with everyday objects – had picked up a few marks. The top coating could do with being deeper, since the material underneath is clearly of a much lighter colour. It isn’t noticeable most of the time since it’s on the underside of the ring, but a deeper coating or more resilient material would be welcome. I wouldn’t wear the ring while lifting weights for fear of taking even more off. 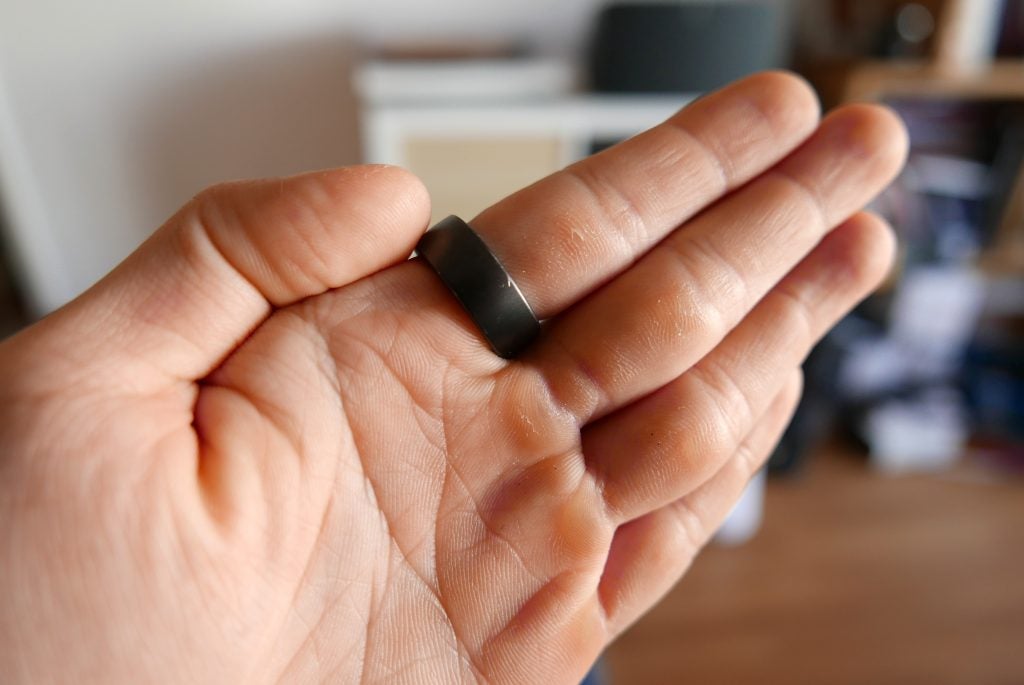 The Motiv is rated as water-resistant to 50 metres, so no issues swimming or showering with it on. That’s always handy for any fitness tracker.

The Motiv is packed with a 3-axis accelerometer and the aforementioned optical heart rate monitor. Between these, it offers all-day activity tracking, sleep tracking and keeps an eye on heart rate, which includes your resting heart rate. All of this information is synced with the Motiv app, which is currently available only on iOS. Android users will need to look elsewhere for their discreet fitness tracking needs. 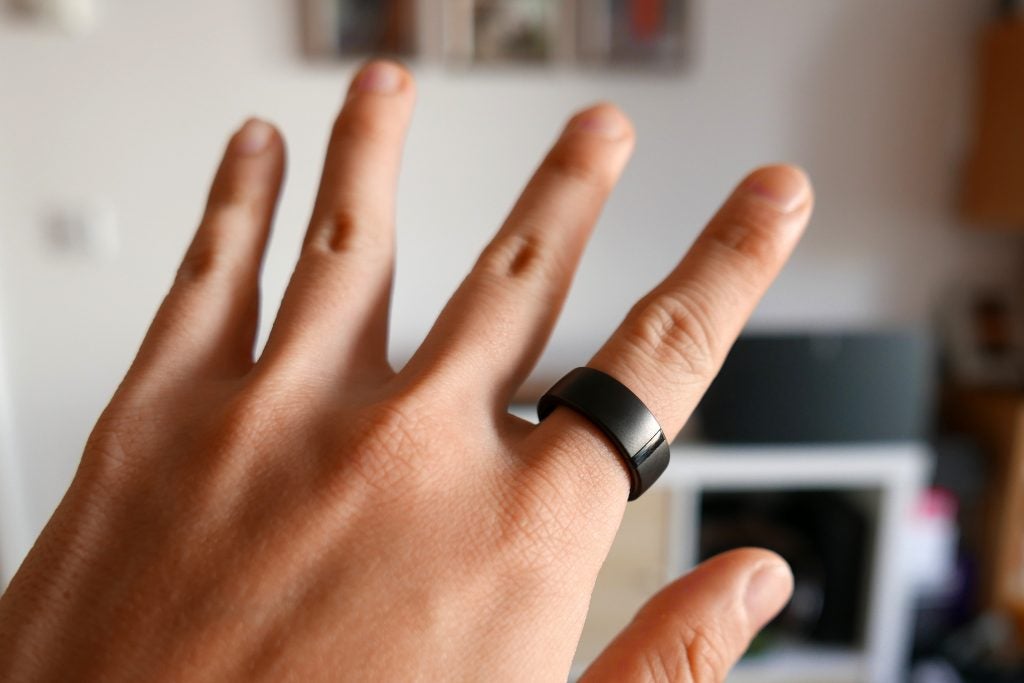 The app itself is cleanly designed with attractive typography and easy-to-use navigation. At the top of the main screen you’ll see a target of active minutes for your day, as well as a breakdown of steps, miles covered and calories burned up until your last sync.

Below that the app uses a cards-based interface to show your time slept and resting heart rate overnight. Throughout the day, more cards will appear for periods of 10 or more minutes activity, such as walking or running. Annoyingly, on occasion the app asks you to confirm you were active during these periods, rather than automatically just adding them.

It’s a slightly different approach to, say, the Fitbit Charge 2 or the Apple Watch. These devices deliver a greater number of reminders to try to get you to take at least 250 steps during an hour. 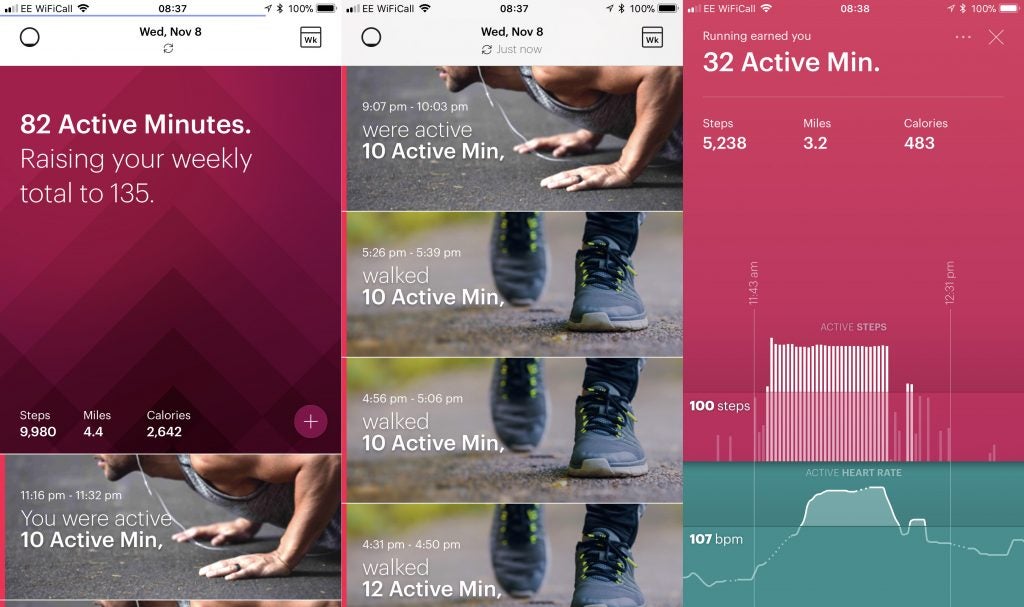 I quite like it, however, since it gives you a tangible amount of activity before a new card appears. Breaking it down to a 10-minute walk is within anyone’s reach, and can simply mean skipping the bus in favour of a leisurely stroll. You can change your weekly goal, but by default this is 150 minutes of activity across seven days.

Having said that, I do miss having a move reminder. While I wouldn’t expect haptic feedback in a device of this size, a simple notification from the app would at least make a decent substitute. I guess this would require the ring to sync far more frequently to the app for it to know you haven’t been moving for a set period. 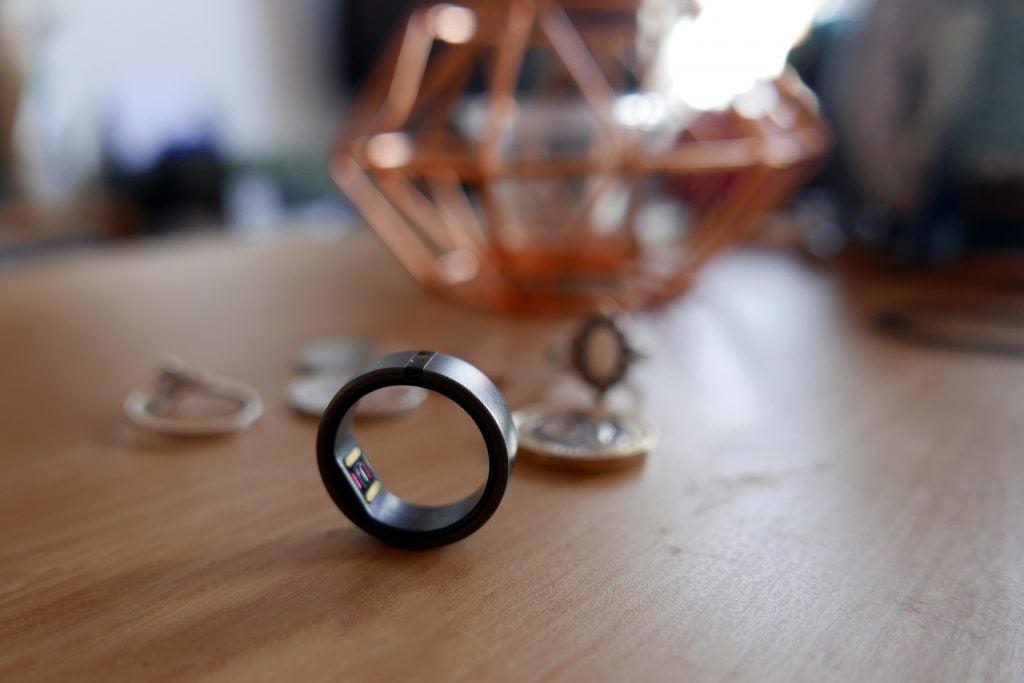 To manually sync the Motiv you just rotate the ring on your finger a few times until you see that little blue LED begin to flash.

As for the step counting, I found the Motiv under-counted my steps relative to an Apple Watch Series 3. It was doing it reasonably consistently at least. The one surprise, however, was that on a run it managed to almost nail the correct distance covered compared to the Apple Watch’s GPS.

The Motiv can automatically identify popular activities such as runs and longer walks, but you can also label other activities or manually add them. It’s also possible to describe the level of intensity but this is more for your own reference. 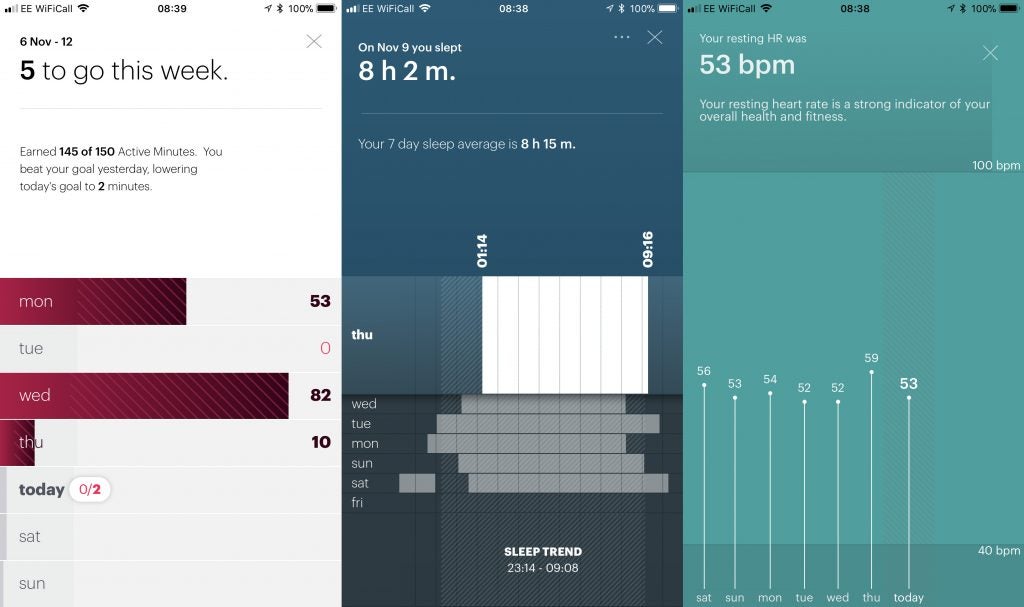 Sleep tracking is very basic, just measuring the duration of your sleep and not individual sleep stages (such as REM, light and deep sleep). I also found the Motiv kept adding about 10-15 minutes of extra sleep to the end of my night’s kip – even if I was clearly active during that period.

Motiv told me this is a known issue for some users owing to a gradual wake up routine that involves getting out of bed slowly and/or non-step behaviour when just waking up. Admittedly I do normally spend a few minutes checking my phone immediately after waking up, which could be the issue. It’s not a problem I’ve encountered with most other sleep trackers, however. Motiv says an algorithm fix is coming soon to rectify the problem. 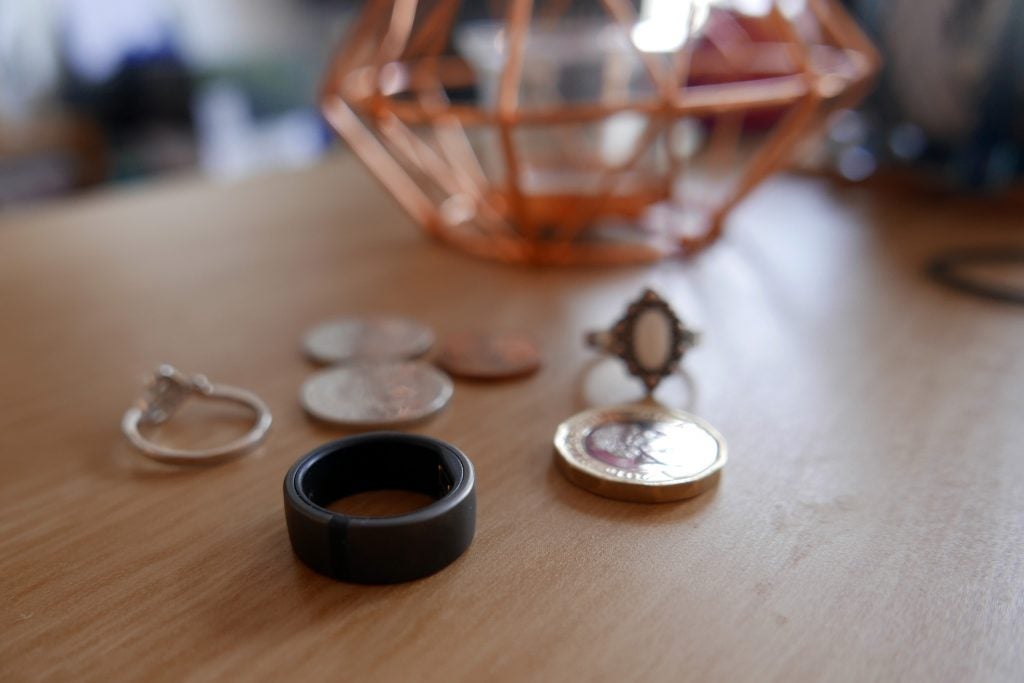 The sleep card does at least let you quickly identify a trend of when you get to bed and when you rise, so you can attempt to fix a shifting sleep pattern.

A resting heart rate screen enables you to identify patterns, which is useful to see if you’re getting fitter. A particularly boozy night at the Trusted Reviews Awards saw my resting overnight heart rate jump above the average considerably, for example. It’s a shame you can’t get your current heart rate reading, but you do get a heart rate breakdown from any active cards and it was broadly in line with what I was seeing from an Apple Watch Series 3. 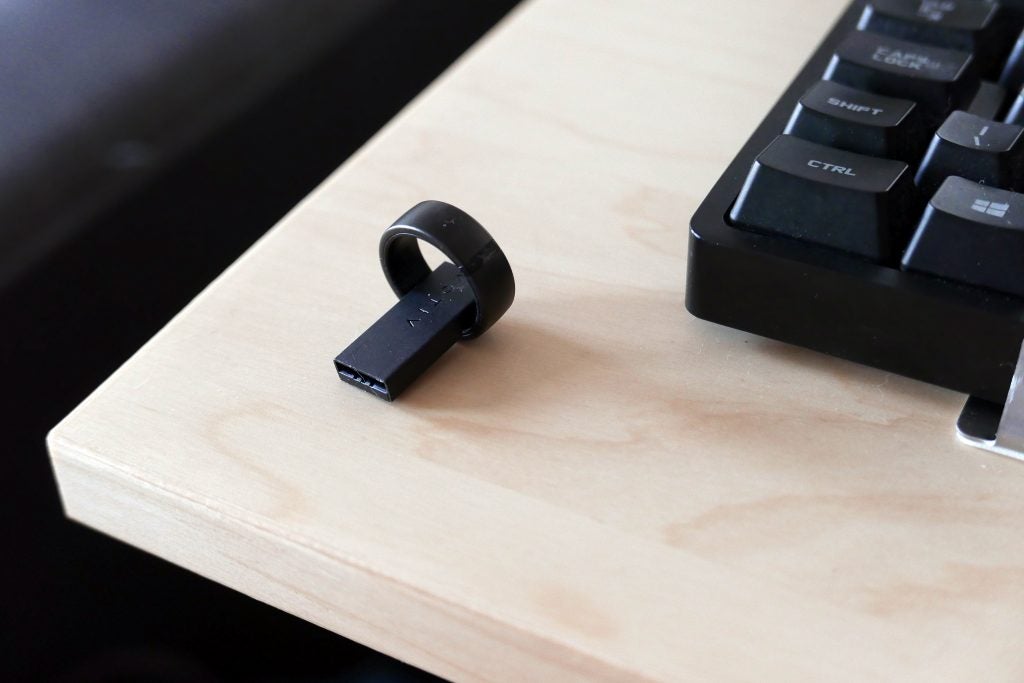 The Motiv is rated at three days of battery life, which felt about right during testing. You can set it up to receive a notification on your phone when the battery is low, or simply jump into the app to view its current charge level.

Charging is done over a dinky little USB cradle. You actually get two chargers with the Motiv, one of which is designed to hang off your keys – a nice touch.

Why buy the Motiv Ring?

If you’re looking for a genuinely discreet fitness tracker and have only basic needs, the Motiv does plenty right. Plus, the app is well designed. At $199, it’s a little pricey considering its feature set – but for a device that fits on your finger, you’d do well to manage your expectations.

For something a little more advanced but that remains discreet, I’d recommend the Fitbit Flex 2 with its optional pendant accessory.

The Motiv is an innovative fitness tracker for those who value discreetness.