Available on Xbox One (version tested), PS4, PC
And so the Mortal Kombat renaissance continues. If 2011’s reboot put the series back on the map, Mortal Kombat X puts it right back in the pantheon of triple A fighters. While it could have got away with a heady mixture of gore, neck-snapping violence and cheesy ‘Get over here’ one liners, the team at NeverRealm has been more ambitious. Forget any low expectations. Mortal Kombat X actually wants to move the fighting game forwards.

Sure, it’s standing on groundwork laid down by the reboot and 2013’s Injustice: Gods Among Us, but we’re struggling to think of another beat-em-up that puts so much work not just into the core mechanics, but into the way its one-on-one bouts are structured. Mortal Kombat X is all about giving players reason to keep coming back, and whether you want to play single-player, online or versus against friends, it’s extremely compelling. All too often fighting games are a flash in the pan, where you spend a weekend working through the solo modes then rely on versus and multiplayer for long-term depth. Mortal Kombat X keeps you coming back across all modes; it’s as much fun to dip in and out of on your own as it is to play winner stays on in a room full of mates. 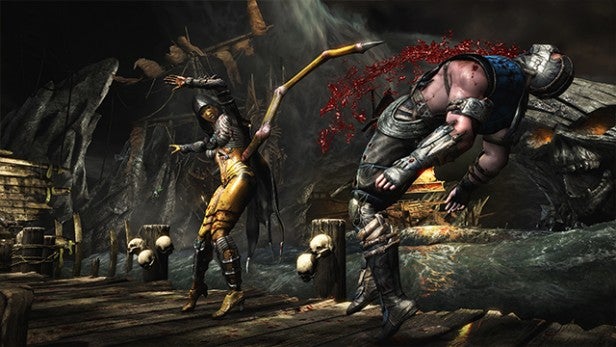 Let’s kick off with the story campaign. Like Mortal Kombat, Injustice and Team Ninja’s Dead or Alive 5, Mortal Kombat X eschews the traditional opening cut-scene, series of bouts, climactic fight, end cut-scene effort in favour of a richer, multi-layered plot that gives you a chance to get to grips with multiple characters in a range of different locations. The plot is preposterous, following the continuing wars within and between the EarthRealm, NetherRealm and Outworld, but its preposterous in a lovably Mortal Kombat way. It’s melodramatic, soapy and ridiculous, creating a world where everything from civil unrest to inter-dimensional conflicts to failed family relationships can be settled through one-on-one fisticuffs, but it’s a lot of fun.

What’s more, it’s seamless. Cut-scenes keep the action moving between bouts without a loading screen to spoil the immersion, and NetherRealm has chosen to make some of these interactive through quick-time events. Personally, I pretty much hate QTEs, yet Mortal Kombat X gets away with them by making the consequences entertaining but not particularly crucial. A character might get hurt or not, or executed painfully, or not, but it doesn’t really matter either way. 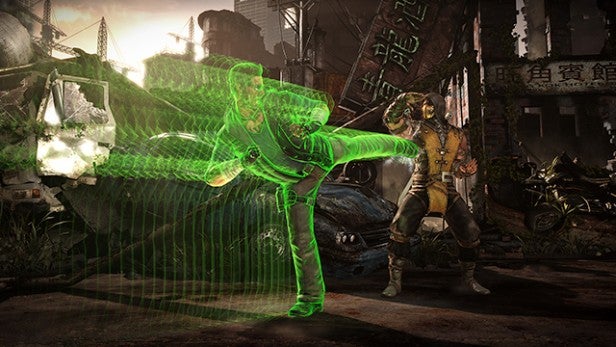 We love the way the story focuses not just on the major goodies, but on some of the more interesting baddies you’ll encounter along the way. We also love its use of cheesy flashback sequences to extend a wafer-thin plot that little bit further. This is the craziest, smartest, more engaging single player mode we’ve ever played in a fighting game.

And it’s not alone. First, NeverRealm throws in Towers; a more traditional set of solo mini-campaigns where you pick a character and tackle a series of enemies of escalating difficulty. Then it throws in the Krypt, effectively a bonus-collecting store dressed up as a basic but enjoyable 3D dungeon crawler. Smartest of all, it ties all the solo and online content into a Factions meta-game. Here you choose a side and all your efforts across all game modes contribute to your faction’s fight for dominance of the three realms. 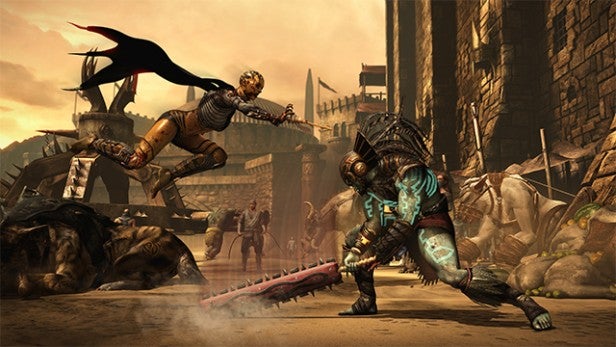 Beyond this, we get conventional versus options and comprehensive online modes, covering not just single one-on-one bouts, with effective matchmaking and the option for an instant rematch, but lobbys with matchmaking, team-based-games and a King of the Hill winner-stays-on mode. Get a good connection and the action is so fluid that you could both be in the same room. Get a bad one and you’ll encounter occasional drop-outs or delays, or pretty painful lag. Mortal Kombat’s netcode seems good, but still needs a little TLC.

None of this would matter were the fighting no good, but it’s actually better than it was in Mortal Kombat and Injustice. The action isn’t as fluid as it is in, say, Dead or Alive or Tekken, but once you get used to the staccato feel it’s very fast, responsive and demanding, pushing you to think carefully about the timing of each move, learn your specials and combos and dish them out when you’re in a good position, not when you’re getting pummelled. And while it has a less sophisticated block and counter game than rivals, there’s a lot of skill and strategy in dealing with incoming attacks through evasion and disruption, so that your opponent can’t build up too much momentum. 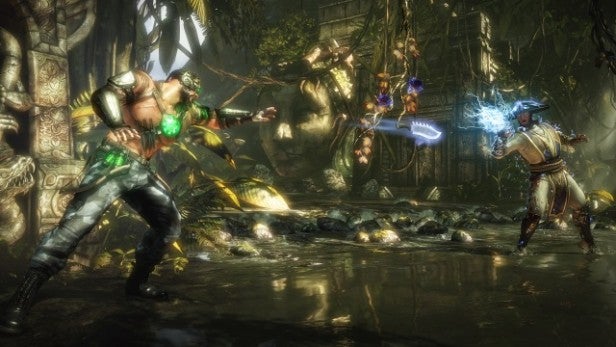 At the heart of Mortal Kombat X lies the X-Ray super moves, where building up your power gauge allows you to unleash a literally bone-crushing sequence of attacks, with a side-order of organ-slicing, eye-jabbing, acid-vomitting action, all rendered in a spectacularly gruesome X-Ray style. However, Mortal Kombat X also goes big on environmental moves, where tapping the right bumper in certain positions will bring elements of the scenery into play, so that you can either wallop your enemy with a barrel, brazier or seemingly harmless old lady, or do a cool backwards leap off a wall or column and hit them hard from a new direction. And at the end, there’s still the chance to pull off an outrageous Fatality or Brutality, finishing the fight with a hideously gory send-off.

Combine all this with a fantastic cast of characters, and Mortal Kombat X is on to a winner. Old favourites like Johnny Cage, Liu Kang, Sonya, Sub-Zero, Scorpion, Kung Lao, Kano and Reptile are all in place, and they’re joined by a host of new stars. Some, like Takashi Takeda, Jacqueline Briggs and Cassie Cage, are direct descendants of established MK heroes, and effectively deliver a similar combat style with a twist.

Others, like beefy emperor, Kotal Kahn, the weird, talon-forming,
insect-spewing D’Vorah and brute/urchin tag-team, Ferra and Tor, are all
new, with brilliant special moves and distinctive play styles. 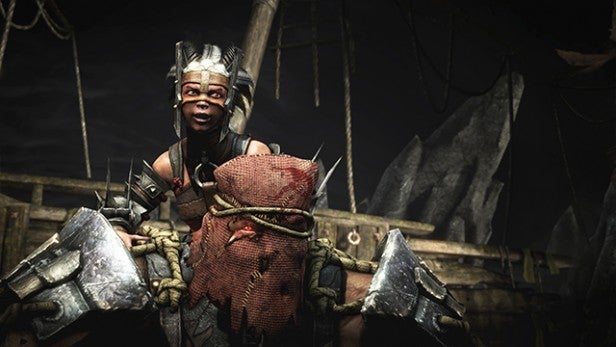 The beauty of Mortal Kombat X’s approach, which owes as much to Soul Calibur as it does to Tekken, is that there’s no shortage of variety when it comes to fighting. In fact, as each character has multiple variants with different move-sets, you could keep on exploring it for months. Some fans are complaining that key characters like Goro are being held back as DLC, but there’s more than enough here to be getting on with without shelling out.

The icing on the cake is the stunning presentation. If you’ve been waiting for a fighting game that can show off the chops of your next-gen console, this is it. The characters are beautifully modelled, lavishly textured and impressively detailed, with Kotal Kahn, Ermac, Ferra & Tor and D’Vorah showcasing some truly fantastic design.

The stages are just as dazzling, some featuring amazing water effects, some cramming in so much background activity that you simply can’t take it in while you’re fighting. Throughout, the lighting and post-processing effects are gob-smacking, and the only sour note is a curious inability to render believable hair. Tanya, Sonya and – particularly – Johnny Cage have some of the least convincing coiffures in recent video games. In a game of this visual quality, that really stands out. 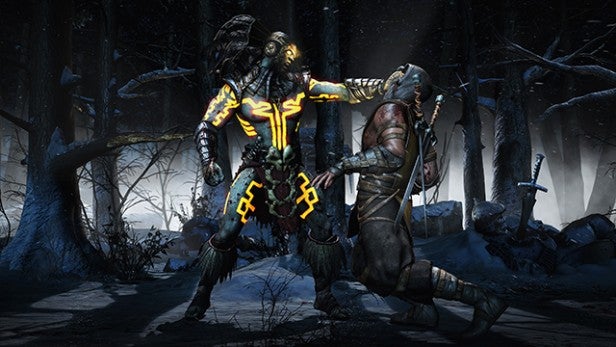 Still, can a few dodgy barnets damn a game this good? Nope. If you pushed us, we’d still say that the fighting feels a little slicker and more precise in Dead or Alive 5: Last Round, Tekken Tag Tournament 2 or Streetfighter IV, but Mortal Kombat X is catching up fast. Meanwhile, on every other level – visuals, solo play, online meta-game and bonus game modes – it’s actually leading the pack.

Verdict
Against all odds, Mortal Kombat X can take on the best of Capcom and Namco and hold its corner. While the core fighting isn’t quite as fluid, it’s smart, inventive and a lot of fun, while the brilliant story mode, Factions meta-game and additional game modes should keep you coming back for months to come. Easily the best Mortal Kombat yet, it’s the first that can go toe-to-toe with Tekken and Streetfighter without going down.